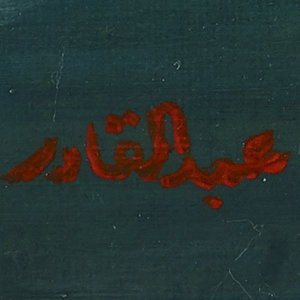 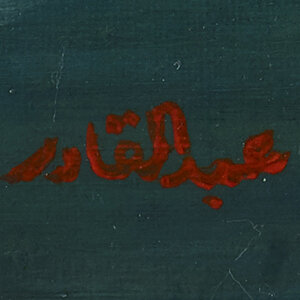 Abdul Kadir al Rassam was born in 1882, in the Vilayet of Baghdad within Ottoman Mesopotamia - present-day Iraq. He was an officer in the Ottoman army and a military painter known as Aşkar ressamlar in Turkish. Abdul Kadir’s last name stems from his nickname ‘al Rassam, ' meaning the painter in Arabic. After he had completed his secondary studies, he moved from Baghdad to Istanbul, the capital of the Ottoman Empire at the time. In 1904, al-Rassam joined the School of War Mekteb-i Ulum-i Harbîye[1], located in Istanbul.

As part of the curriculum, he studied military science, perspective drawing, and painting based on European academic styles. Al-Rassam and his peers produced landscape paintings depicting terrains for military use. After World War I and the fall of the Ottoman Empire, he returned to Baghdad, while his wife and family remained in Istanbul[2].A retired officer, al-Rassam pursued an art career in Baghdad, now part of the newly established monarchy of Iraq. Later, he travelled to Italy, France, Germany, and England to enhance his knowledge of fine European art. He was an honorary member of the ‘Friends of Art Society,' the first artists' group founded in Baghdad in 1941. They began the tradition of annual exhibitions and promoted fine art-making in Iraq.

Throughout his life, al Rassam witnessed two distinct eras in the history of Iraq: the culmination of the Ottoman Empire and the inception of a modern Iraqi state under British oversight. Still, he experienced first-hand the educational reformation implemented in the last decades of the Ottoman Empire. Following the Tanzimat reform era, Sultan Abdul Hamid II, who ruled from 1876 to 1908, established several military and engineering schools, which were centers for drawing and painting education.[3] Such was the case in the School of War where al-Rassam studied. Nevertheless, painting was taught in studios and private academies such as that of Pierre Désiré Guillemet in Pera, before the foundation of an Academy of Fine Arts in Istanbul, in 1883. Al-Rassam himself trained under acclaimed painters living in Istanbul who assumed French art styles. In his sweeping landscapes and pristine portraits, al-Rassam adopted a form of realism and naturalism with hyperreal visual precision. He used oil paint on canvas, as well as watercolour on paper, to represent the physical world around him.

Al-Rassam belonged to the first generation of artists in modern Iraq, including Mohammad Salih Zaki (1988-1974), Hajj Mohammad Selim (1983-1941), and Asim Hafiz (1986-1978 among others who introduced easel painting into Iraq. This group of military-artists was enthused by the new way of looking into the world and the idea of painting on free support, be it a wooden panel or a stretched canvas. It was a novel approach compared to traditional manuscript painting, which outshined in the late medieval Islamic world in Persia, Syria, Iraq, and the Ottoman Empire. As such, they shared their knowledge with the public through their work and via tutoring. Some taught in the schools of the new Iraqi state, and others offered private lessons. For instance, al-Rassam taught painting at a local school for twenty-three years. He retired in 1940. Besides, he was one of the first local artists to teach drawing and painting at his studio in Baghdad. It was part of the house he lived in.

In Baghdad, al-Rassam lived alone in a house of two stories. He used the lower floor as a studio and the upper for living and receiving guests. Going up the stairs, he hanged on the wall, one of his paintings portraying an officer holding his weapons. It looked so real that people attempting to reach the upper refrained assuming a real soldier was watching over the place.[4]

Al-Rassam depicted daily life in Istanbul and Baghdad. However, his paintings consisted mostly of landscapes, mainly of the Tigris river. He showed no interest in the urbanization accompanied by the British occupation nor the social change in Iraq. Instead, his work emphasized idyllic pastoral sites or rural life. He targeted places that attain regionalist sentiments. Thus, his paintings held particular interest among the elite.

Although al-Rassam adopted a realistic style, his landscapes were somehow mannered. He would add amplified visual effects and adjust the compositional elements to create a sense of sophisticated elegance, such as in View of the Tigris, 1326AH,1908AD.[5] The oil on canvas painting depicts the blue Tigris river with palm trees in the remote horizon. Two fishermen sailing in ghoofas (round wooden boats) seem minute in scale compared to the brown river bank and green tree occupying much of the right side of the painting. The manipulated proportions accentuate a sense of distance and add to the panoramic effect common to al-Rassam’s pictures. In this and most of his landscapes, al -Rassam incorporates fluffy cumulus white clouds offering an atmospheric feel. They dominate an omnipresent blue sky and reflect on the tranquil water. It is worth noting that Al-Rassam’s paintings were signed in Arabic and dated in Hijri.

Often drawing his subjects from photographs, al-Rassam depicted archaeological sites that register the history of Iraq. At times he would superimpose two images together. For example, in an aerial depiction of the Great Mosque of Samarra[6] al-Rassam introduced a British military aircraft into the painting. Toned in rustic beige and grey, mimicking archival photos, the painting hints to the air force attack held on Iraq during the Mesopotamian Campaign of World War I. Moreover, It registers the architectural remains of the mosque, which completed during the Abbasid era. Similarly, in Taq-e Kasra, 1345 AH, 1926 AD,[7] painting in oil on canvas, the artist depicts the giant brick vault in the world, located near the modern town of Salman Pak, in Iraq. Taq-e Kasra, also known as the Arch of Ctesiphon, is the only visible remaining structure of the ancient city of Ctesiphon - a symbol of the Persian Empire in the Sasanian era - 221-654AD.

Al-Rassam produced some iconic portraitures. He featured leaders and people of influence, such as in Mohamed Darouich al-Allousi, 1342AH,1924AD. Painted in an idealized style, the esteemed Iraqi sheik with a bearded face head dressed in a white turban gazes out at the viewer with straight regard. He sits cloaked in black against a turquoise sky background. In this painting, Al-Rassam demonstrated attention to clarity and careful application of oil paint, attaining a velvety soft feel to the picture.

Al-Rassam died in Baghdad in 1952. He left behind an oeuvre of classical paintings that informed much of the following generation. The Museum of Iraqi Pioneers in Baghdad and the Iraqi Museum of Modern Art exhibited al-Rassam's work. Unfortunately, both museums were looted and destroyed in 2003 during the US military invasion of Iraq.[8] However, al-Rassam’s first public work, a mural painting at the entrance hall of The Royal Cinema, in Baghdad, escaped the destruction. It holds his memory to date.

Yaban, Nesli Tuğban. “Environment of Culture and Art in the Ottoman Empire in 19th Century.” The Online Journal of Science and Technology (TOJSAT). Accessed March 16, 2020. https://www.academia.edu/37680983/Environment_of_Culture_and_Art_in_the_Ottoman_Empire_in_19th_Century.

“​​Abdul Qadir Al-Rassam Was Part of the First Generation of Modern Iraqi Painters. He Stands at the Core of a Group of Artists Trained in Istanbul Who Brought Their Artistic Knowledge Back to Their Home Country.” Abdulqader RASSAM | Ibrahimi Collection. Accessed March 16, 2020. http://ibrahimicollection.com/node/10.