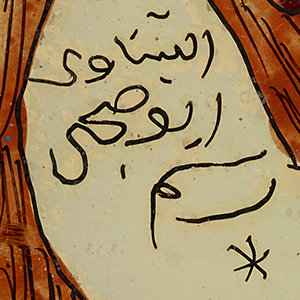 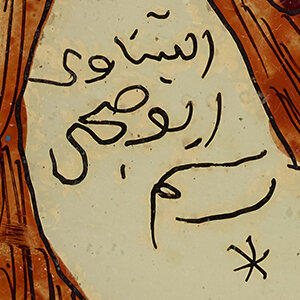 Born as Muhammed Harb Al Tinawi in 1888 in the Bab al-Jabiya area of the old city of Damascus, ‘Abou Sobhi Al Tinawi’ became the artist’s commonly known name and was coined by his father from a young age.[1]  Coming from a family of glass-painters and tapestry professionals,[2] a young Al Tinawi spent a great deal of time with his father, an amateur artist himself who gave his son his first lessons in painting. His father owned a shop for household appliances in the old city but found the time to paint often, drawing his compositions and then leaving spaces to be painted in earthy colours by his son.[3] Influenced by his father and his wider family, Al Tinawi had creativity already running through his veins. He never studied art at any school, having only received a basic education in his local madrasa,[4] however, this didn’t stop his imagination and artistic skill from developing. Listening to popular stories, biographies and folk legends in great and gritty detail, Al Tinawi later drew the characters as he had imagined them in his own mind, often spontaneous and simple in composition, but always rich with vibrant visual narrative.

The artist was sheltered from the traditions of international art history, and was completely unfamiliar with the canons of Western painting and artistic practice,[5] allowing him to find inspiration purely from local references and his own creative curiosity. This resulted in a unique artistic expression, born out of naïve spontaneity and a love for popular biographies and cultural lore. Living in a traditional Syrian society, Al Tinawi had been surrounded by tales of courage, epic battles and noble values, all coming together to symbolize a vision of the valiant Arab man and the bounteous heritage that surrounds him, both historically and presently.[6]

He owned a shop in Damascus’ old city, much like his father, in which he created a small space as his painting studio. It was here he began to develop his personal style and technique, first drawing on paper and cardboard, then painting on canvas,[7] and eventually painting on glass, the medium he then used predominantly for much of his artistic practice. On glass, he painted figures such as Omar bin Wad al-Amri, Al-Zeer Salem, Dhiab bin Ghanem, Prophet Dawood, Abu Zaid Al-Hilali, Sultan al-Zahir Baybars, Buraq, and Ali Ibn Abi Talib, who is depicted in a lively and vivid painting by Al Tinawi in the Dalloul Collection (Ali Ibn Abu Talib and Al Jinn Master, n.d.). Classical Arab heroes from historical, religious and folkloric tales formed the core of his compositions, often riding horses, wielding large and deadly weapons and fighting on various battlefields,[8] also dedicating a number of artworks to depictions of brave Syrian revolutionaries who fought against the French occupation in the first half of the 20th Century.[9] However, the story, which left the greatest impression on him and became the subject of countless paintings by Al Tinawi, was the story of Antar bin Shaddad and his love, Abla. Antar, a pre-Islamic poet, knight and slave, had many adventures and battles across ancient Arabia, the subjects of the vast majority of the paintings by Al Tinawi in the Dalloul Collection. From a range of gallant images including Antar with the Spear (n.d.) and Antar Guiding the Camels (n.d.), to two separate romantic depictions of Antar and Abla (n.d.), Al Tinawi introduces us to these legendary characters in paintings, which are similar in subject but always unique in character and composition. Bursting with colour and dynamism, Al Tinawi tells us countless stories of these legendary figures, documenting their lives, personalities and heroism through impulsive (and often childlike) outlines, motions and brilliant colour.

Despite being almost illiterate, in the majority of his works Al Tinawi annotates his images with the names of the characters, sometimes even writing brief comments describing the scene,[10] for example in Antar, The Minister, The King (n.d.) in the Dalloul Collection. He also makes the effort to decorate the scene, often with flowers and other decorative motifs, regardless of the violence depicted within the margins,[11] as can be seen in Antar Abu Al Nawaris (n.d.), also in the collection. Despite his expressive imagination and attention to detail, however, his heroic paintings were likely also influenced by imagery he may have come across in popular paintings taken from manuscripts and artisanal production both locally and from other countries in the region.[12] However, although he is famously known for his folkloric paintings, Al Tinawi also had a great interest in nature, often drawing scenes of Ghouta, Barada River and orchards and houses in old Damascus, decorating his compositions with greenery and jasmine.[13]

In the mid-20th Century, Al Tinawi’s works grew in popularity and requests for his paintings increased. Syrian intellectuals, Arab travellers and foreign tourists flocked to his store to meet him and purchase his work. The Lebanese in particular bought much of his work, often visiting him at his store and in his home in old Damascus with sweets, and leaving the city for Beirut with Al Tinawi’s paintings,[14] with his popularity continuing until his death in 1973.

“His drawings found a market and a presence, and tourists visited him often. But he was not consciously aware of it, meaning that he identified himself with an activity he loved, and later saw it as a source of livelihood, and other than that he didn’t care if he was famous or obscure!”

Although Al Tinawi did not leave his beloved Damascus during his lifetime, did not seek any form of fame or media attention, and did not seek out exhibitions for his work, he became widely known across the Arab world.[16] He did not reject the label of folk artist and never claimed to be anything more than a local painter, proudly signing his paintings with variations of ‘Painter Abu Subhi Al-Tinawi - Damascus - Bab Al-Jabiya – Syria’. And despite his lack of training, exposure and perceived artistic finesse, he influenced many Arab artists (including his own children and grandchildren) such as Burhan Karkutli and Elias Zayat.[17] His paintings can still be found in many Syrian homes, and especially within Damascus, the city from which he found so much magical inspiration.

Antar with the spear