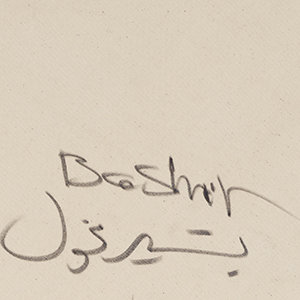 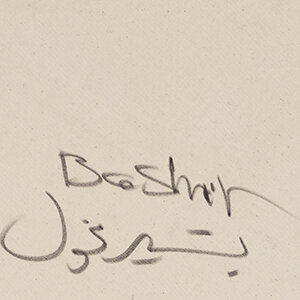 Bashir Makhoul was born in 1963 in the village of Makhoul in the Galilee region of Palestine. The artist was only five years old when he and his nine siblings – four sisters and five brothers –...

Bashir Makhoul was born in 1963 in the village of Makhoul in the Galilee region of Palestine. The artist was only five years old when he and his nine siblings – four sisters and five brothers – lost their father, leaving his mother alone to raise them. Bashir attended a Catholic boarding school until he was ten, and around the age of 13 began to supplement his schooling with paid work at a carpentry shop to contribute to household income. It was his boss at this shop who discovered the artist’s skill and passion for design; eighteen months after he began, Makhoul was named the manager of the workshop. Following secondary school, he also made violins designed for Arabic music and played them at weddings. In the early 1980s, he began to study fine arts at Haifa University, but when a Scottish clergyman he met while teaching at a summer school commissioned a public sculpture on the Isle of Iona, his art career relocated to the United Kingdom. Makhoul completed a BA in fine arts at Liverpool Polytechnic and an MA followed by a Ph.D. at Manchester Metropolitan University. After completing his higher education in 1995, he directed the University of Southampton’s Winchester Campus and headed the Winchester School of Art, later becoming the head of the School of Media, Art, and Design at the University of Bedfordshire, and deputy vice-chancellor at Birmingham City University. In 2017, Makhoul became the first Palestinian Vice-Chancellor at the British University for Creative Arts, cementing his central place in the art world of the Palestinian diaspora.

Makhoul’s Palestinian heritage was central to his early work, which merged hard-edged Western abstraction with Kufic calligraphic scripts. His work Al-Hijara (1990) features the word for “stone” in Arabic on a background of equally distributed triangles. The title alludes to the practice of stone-throwing as an act of resistance, favored by children during the First Intifada (1987-1993). Here and in other paintings, he uses red, white, black, and green acrylic on canvas; adopting the colors of the Palestinian flag was itself an act of resistance at the time, because it was strictly prohibited by the Israeli Defense Forces within the Occupied Territories. Makhoul introduced political signifiers through minimal abstract shapes and a limited palette, rather than through overt symbols such as doves, olives, and landscapes, stepping away from the nationalist iconography and the lyrical illustrative art of resistance popular in Palestine in the 1970s. Instead of socialist realism, he drew inspiration from the prosperous cultural period during the Islamic “golden age” (8th-12thcentury BCE). For example, Zigzag (1992) illustrates an arabesque star pattern in black and red acrylic with a schematic rendering of the ‘Shell’ oil company in the upper left corner. The right edge of the canvas is devoid of red paint, thus introducing the idea of an open frame and releasing the tension between ground and figure, typical of Islamic art encasing the logo of an oil company within a web of ornamental polygons, Makhoul suggests the increasing interconnection of the East and the West, as well as Arab culture and the oil industry.

After becoming a father and a British citizen in 1997, Bashir Makhoul returned to themes of identity and origin. In that same year, he visited his grandmother, Najla, who had fled the Nakba to Beirut in 1948. Following her death in 1998, Makhoul created a body of work related to Najla and his visit to Beirut. In his installation She Was (1998), he questioned the nationality of his grandmother, who was born in Palestine, lived as a Lebanese, and died as a refugee. Makhoul bridged the distance between Najla and himself in his installation The Darkened Room (1998). Exploring new media, he included a video projection of a close shot of his eye moved to tears, and a soundtrack of a tape she had sent him voicing her grief in exile.

In his 1999 Hold exhibition at Leeds Metropolitan University Gallery, Makhoul brought questions of identity into conversation with the concepts of belonging and possession in the context of the Palestinian-Israeli conflict. The exhibition included two video installations, Thirst and Who the fuck are you? and a new series of digitized photographic images entitled Who’s Who? The series presents a pair of images of the only elements Makhoul claims possession of; a drop of blood, a drop of water and a piece of skin from his body, and a handful of sand. Similarly, in One drop of my blood (1999) the first image includes shining red blood droplets, and the second blood smudged and dragged into a pattern of symmetrical axes.

Estrangement and the uncanny are repeated themes in his work as a whole. During the aforementioned visit to Beirut, for example, Makhoul created a series of photographs of bullet holes, of which he selected six to enlarge, duplicate, and arrange in a pattern of black cavities across strafed, ochre-tinted walls. The resultant image, entitled Points of View (1997-1998), was printed on vinyl wallpaper; here, repetition allows Makhoul to transform a horrifying detail into a decorative domestic product, evoking a sense of the uncanny similar to that found in the work of fellow Palestinian-British artist Mona Hatoum. The same effect can be found in his installation Kissed (2001),where Makhoul presents a video projection of a bullet’s entry hole through skin superimposed with audio of a kiss he had given his newborn son. The sound of the kiss seems to mimic that of a penetrating bullet, and their juxtaposition renders a gesture of love and blessing into something foreign and dangerous. The subject of bullet holes appears for a third time in Wounds (2007), which reproduces and enlarges seven of the bullet hole images from Points of View and a still from Kissed through eight lenticular panels hung in a grid of four by four.

Wounds marked the first time Makhoul used lenticular micro-lens photographic printing, which marked the beginning of his now-signature photographic practice. The malleable, ready-to-manipulate digital image was appealing to Makhoul, but, as the artist has noted, “the lenticular was even more interesting because of the insistence on its surface.” Using software to combine numerous digital images in the same print, the artist then bonds the print to the surface of an acrylic lenticular micro-lens sheet, which reveals each image as the viewer’s position alters. Deploying this method, Makhoul created works merging archival photographs of Palestine during the British mandate years with their recent digital equivalent taken by the artist in contemporary Palestine and present-day Israel. The old and the new, the familiar and the strange, nostalgic and wishful thinking occupy the same frame in Jerusalem(2007) featured in his 2007 exhibition Return. Through this captivating technique, Makhoul portrayed the controversial issue of refugees’ return in relation to both Israelis and Palestinians.

Through his seminal large-scale installation Enter Ghost, Exit Ghost (2012) comprised of a life-size maze and a mock-up of an Arab town, Makhoul criticizes new spaces that usually emerge in sites of conflict. The title of this work was drawn from the stage directions for the first scene in the Shakespearian tragedy Hamlet,  The mock-up town is made of hundreds of cardboard box houses mirroring the fake cities built for the Israel Defense Forces’ urban warfare training in Palestine’s Naqab (Negev) desert. The maze is made of wooden walls clad in lenticular micro-lens panels depicting fused images of boxed houses, windows, doors, and streets, and buildings in East Jerusalem, Hebron, and the Shaufat refugee camp. A simple twist within the maze relocates the passer-by into a different surrounding- a possibility of multiple viewpoints in a singular situation. Also using cardboard boxes, Makhoul addressed occupation and settlements in his Otherwise Occupied /Giardino Occupato exhibition as part of the 55th, Venice Biennale in 2013. With thousands of cardboard box houses, Makhoul “occupied” the garden of the Liceo Artistico Statale di Venezia. The installation was also partially participatory, as passers-by could make their own cardboard house boxes and place them in the space. Space became a squatter settlement symbolic of occupied Palestine.

Recently, Makhoul has ended a hiatus from painting. He began in 1996 to create work steeped in a haunting nostalgia. In 2014, he created colorful paintings depicting enhanced and enlarged images from the cardboard town in Otherwise Occupied, as well as tapestries based on the bullet hole images in Point of View. As a gesture of return, Makhoul showed his first solo exhibition in Palestine, Floating Free, in 2015.  Addressing the uncertainty of return and the nature of art in a capitalist market, he displayed gold plated boxed houses floating on a red surface. He collaborated with his son Alex, himself an animation artist, in his latest exhibition The Punishment of Luxury (2018).It featured a creative body of work comprising 10,000 model houses, filled with thyme (zaatar) that spilled from the doors and windows of the houses. Through heritage food, Makhoul asserted that national identities could neither be entrapped nor enclosed.

Makhoul maintains a studio in Beijing, China, where he works when not at home in the UK.

The Darkened Room, installation as part of the Liverpool Biennale, UK

Special Recognition Award for his outstanding leadership in the field of arts from the British Education Awards (BEA), UK

Unlike Other Springs: The Story behind Birzeit University Art Collection 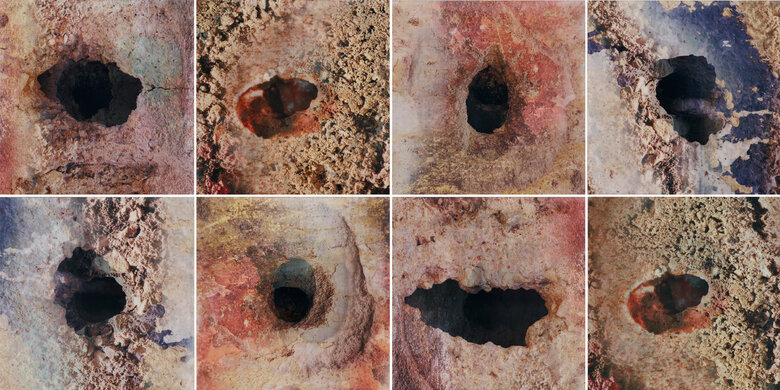 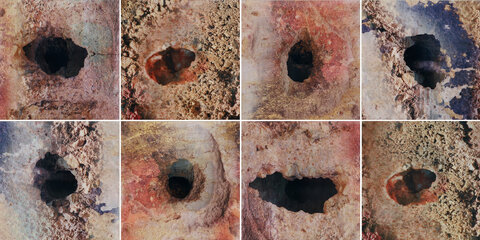 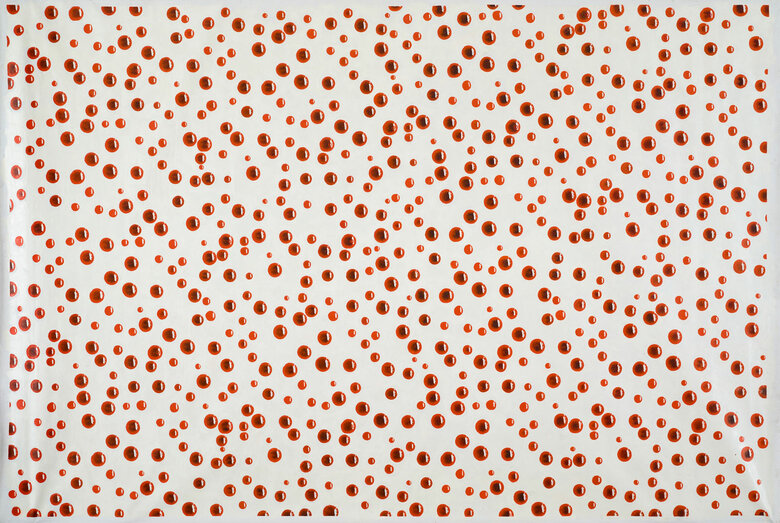 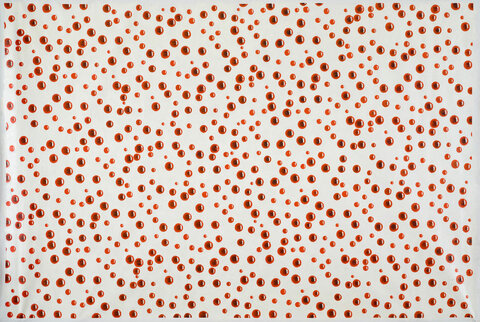 One drop of My Blood 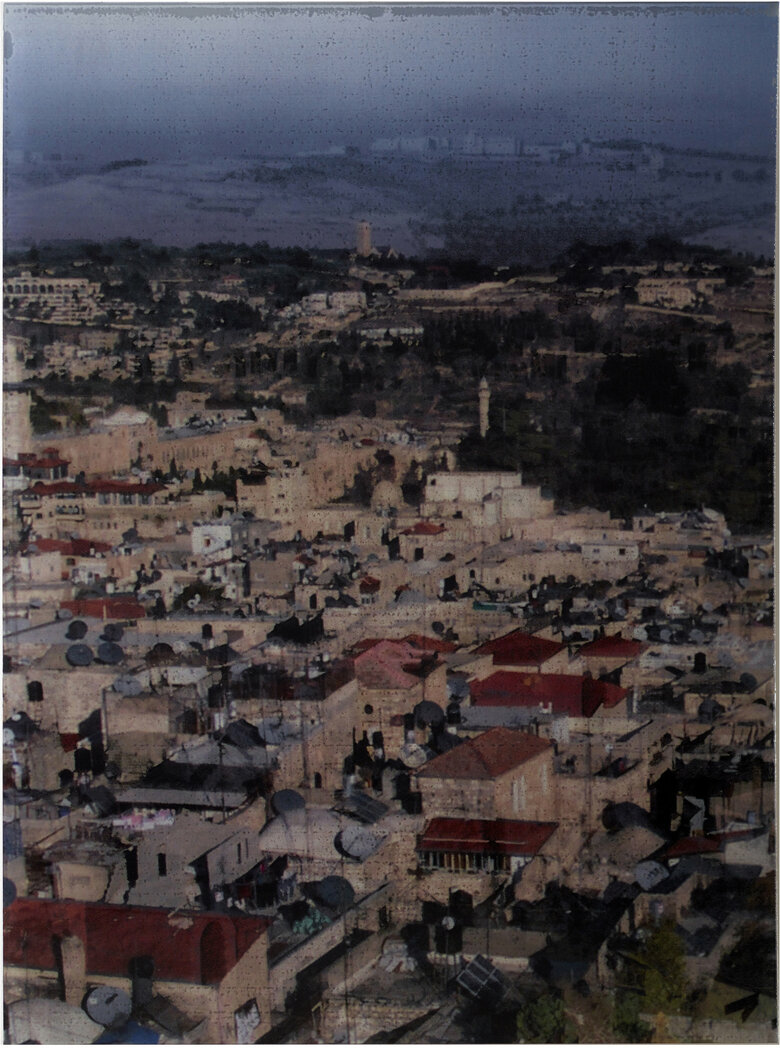 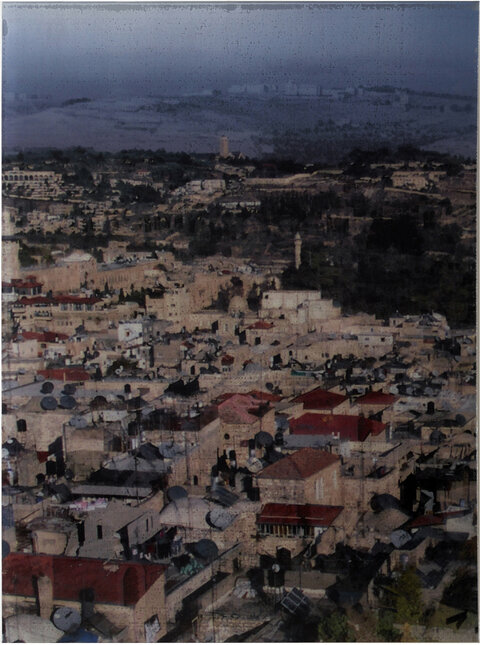 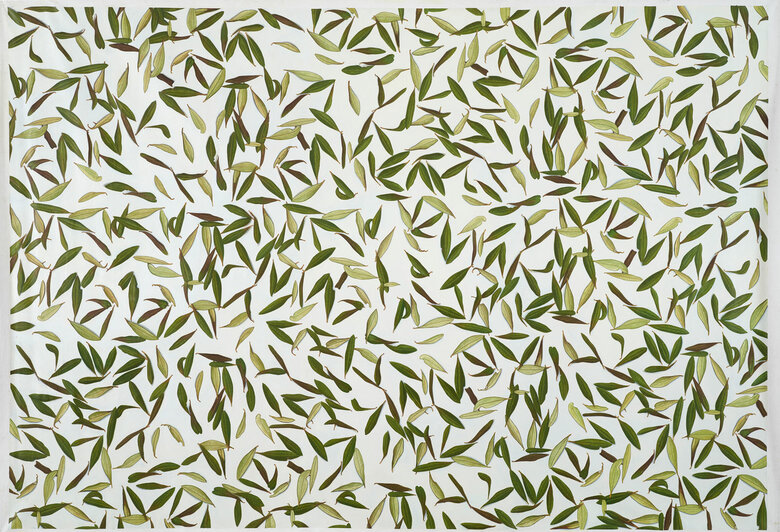 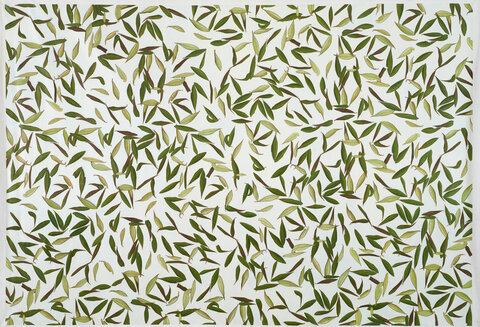 One Leaf of My Olive Branch 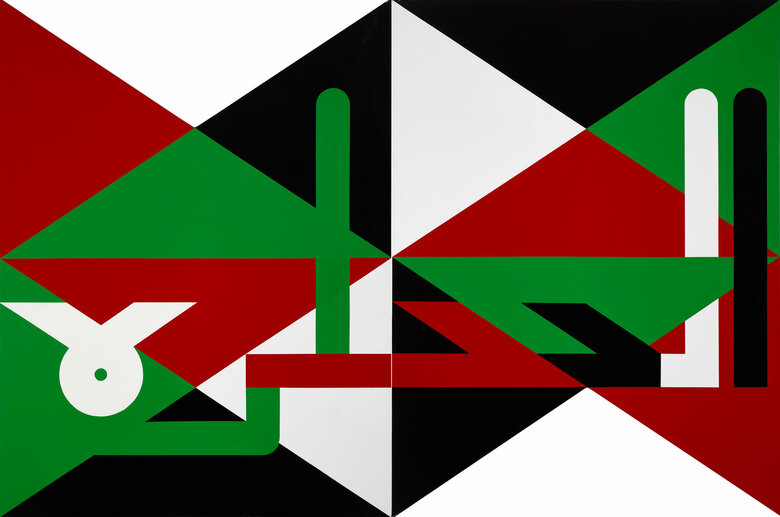 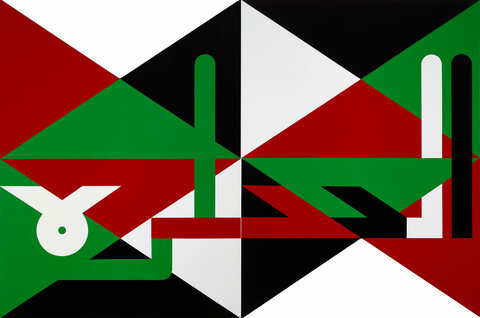 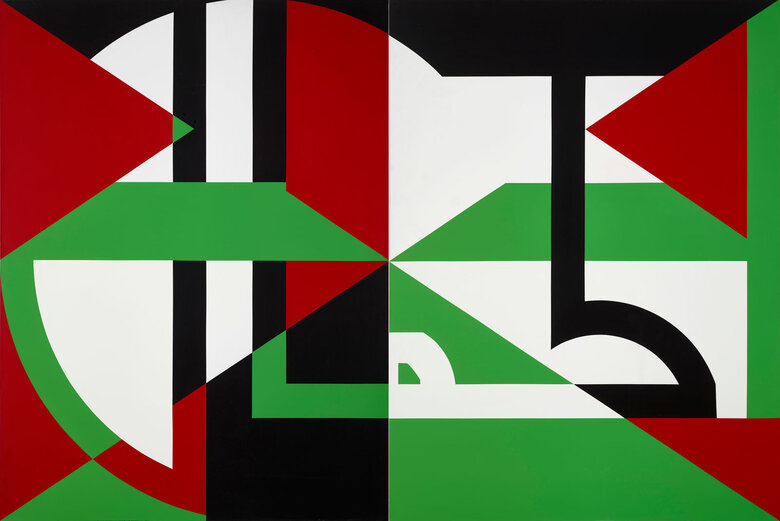 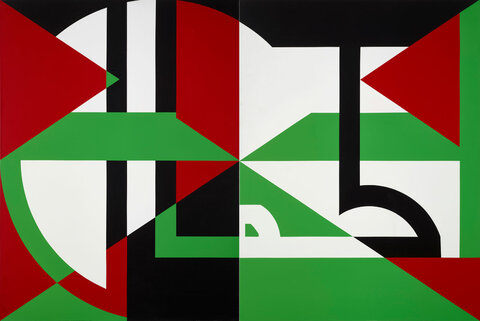