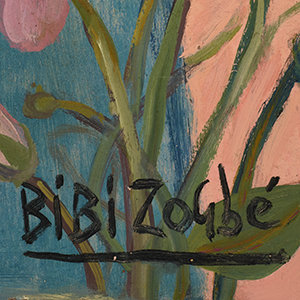 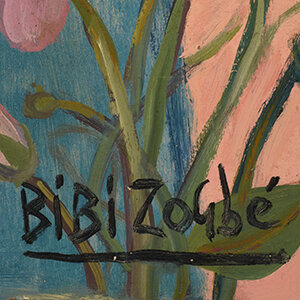 Known As Bibi, Labibeh Zogbé was born in 1890 in Sahel Alma, a coastal city in Lebanon, west of Beirut. She received a solid French education at the Holy Family School in Jounieh, a town near her birthplace, where the love of art was infused into her. Bibi immigrated to Argentina at the age of 16 and married Domingo Samaja in the city of San Juan[1]. However, her marriage didn’t last for long; she declared herself an independent woman to lead a liberal life in Buenos Aires. Bibi was enthusiastic about pursuing a life of art; consequently, in the early 1930s, she studied under the Bulgarian painter Klin Dimitrof who lived in Argentina. In 1934, Bibi’s first solo exhibition took place at The Witcomb Gallery and was inaugurated by the president of the Republic of Argentina, General Agustín P. Justo. The show was received with high acclaim from the critics and the public. It was followed by a solo at the Charpentier Gallery in Paris, in 1935, and Chile in 1939. Following those exhibitions, the reputation of Bibi rapidly flourished throughout South America, in particular, Brazil, Uruguay, and Chile. She eventually became a part of several international artistic circles in South America. Being loyal to a joyful mode of painting and mostly dedicated to painting flowers, Bibi soon became known as “La Pintora De Flores” (The Flower Painter).[2]

The artist’s adventurous life led her to visit and live in several cities around the globe. She spent her time between Paris and Dakar, from the mid to the late thirties. For a year, she visited many cities in Africa, studying the ambiance and customs of its people and environment. She translated what she learned into a series of women’s portraits in their African outfits, bursting in poetry and freedom. Her stay ended with an exhibition at the salons of “The Friends of Art” in Dakar[3]. In 1938, Bibi returned to Argentina to exhibit once again at The Witcomb gallery, resulting in a large floral panel (3x 6m.) of hers on permanent display at the National Museum of Natural Sciences in Buenos Aires. The end of the World War II was a call for her to revisit Paris and Dakar and respond to the then, long-awaited invitation of the Lebanese government to participate in a collective exhibition at the National Museum of Lebanon, in 1947, where she receive the Lebanese Cedar-Medallion of Excellence.[4]

In her Buenos Aires studio, Bibi rubbed shoulders with members of the elite culture and art scene of the city, moreover, she befriended politicians, poets, writers, painters, and sculptures, all leading a bohemian life, which was the trend at that time.[5] It’s interesting to affirm that Bibi bourgeoned in a universe of immigrant artists like Mariette Lydis, an Austrian-Argentine painter (1887-1970) and Margarita Wallmann a German-born dancer and choreographer (1901–1992), all of who created noticeable Argentinian modernity, focusing on a flawless formal production, and at the same time promoting joyful aesthetics and profound sensibility.[6]

It is known that Mariette Lydis and Bibi both frequented the Polish painter Tamara de Lempicka (1989-1980), who lived between Paris and the United States and was known for her polished Art-Deco portraits; she executed several portraits of Bibi, among them the well-known Il Fondo Rosa, 1923.

Under the inspiration of Tamara De Lempicka’s work, Bibi Zogbé investigated the Art-Deco style in painting. Art Deco was a style of visual arts, architecture, and design that first appeared in France before World War I. It had its roots in traditions, focusing on elegance and sensuality, but at the same time, promoted relative modernity by using Cubism’s bold geometric forms and borrowing the bright colors of Fauvism. That environment caused Bibi Zogbé to execute, in a perfectly crafted depiction, the most precise technique of painting; a clear and clean brushstroke, the radiant motifs of her predominant theme, the flowers.

Bibi Zogbé set herself the goal to deliver a visual delight and convey good taste. Thus, in her flowers, she transcended the purely decorative aesthetics and promoted a certain symbolism behind her favorite subject. In that, she acknowledged a western fashion, which had brought back, towards the end of the 19th century, the floral theme in art, giving it an autonomous meaning and uncovering the mysterious inner world of the floral figures.[7] The flowers of Bibi contained two layers of vocabulary: the outer portrayal of flowers, and the hidden meaning that each one of her bouquets or single flower disclosed. The metaphorical facets of her flowers showed the eternal quest for spring and renewal that the artist pursued, it also reflected the passionate and adventurous soul of a free woman. The interlacing two flowers in her undated work Dos Almas (Two 2012), portrayed affection and connection between souls. Charles Corm (1894-1963), a Lebanese writer, said about Bibi’s hidden world behind her flowers: “Each one of Bibi flowers seems a naked soul, tormented by passion, sobbing with delight, tensed to the extreme, reaching towards infinity.”[8]

In her flowers, and foliage Bibi reveals a universe, through a bold and direct representation. She attacks her subject matters in a frontal approach[9] (giving a straight point of view over her subject). She centralizes her elements, creating a perfectly balanced composition. In her painting De Mi Jardin (1964), part of the Dalloul Art Foundation’s collection, we witness the frontal depiction and also the distribution of the elements on the canvas leaning from right to left, as if a breeze was blowing on the wildflowers from her garden. Therefore, by diffusing her elements all over the painting, Bibi displays an acute sense of detail and introduces dynamism into her work. This vitality can also be seen through the vibrant colors she uses. On a united background of a greenish-blue tone, she multiplies the tonalities and degradations of earthy colors, almost dissecting the stems and leaves. In the middle of this fall scene, she makes sure to distribute a few flowers, as fresh and lively dots of color, in the calm tones of pink, or white, predicting the coming of spring, and the eternal renewal of nature.

The cosmopolitan life that Bibi Zogbé led, shaped her personality as an artist, and stimulated her art to borrow from multiple sources of influence. Throughout her career, she was faithful to the quality of her colors, lines, and compositions, and in parallel, she had a watchful eye on the modernity of the time. She was a free spirit who transgressed the social rules and built a career and recognition out of her art.

WOMEN MODERNIST ARTISTS TO BE HONORED AT BEIRUT ART FAIR 2016 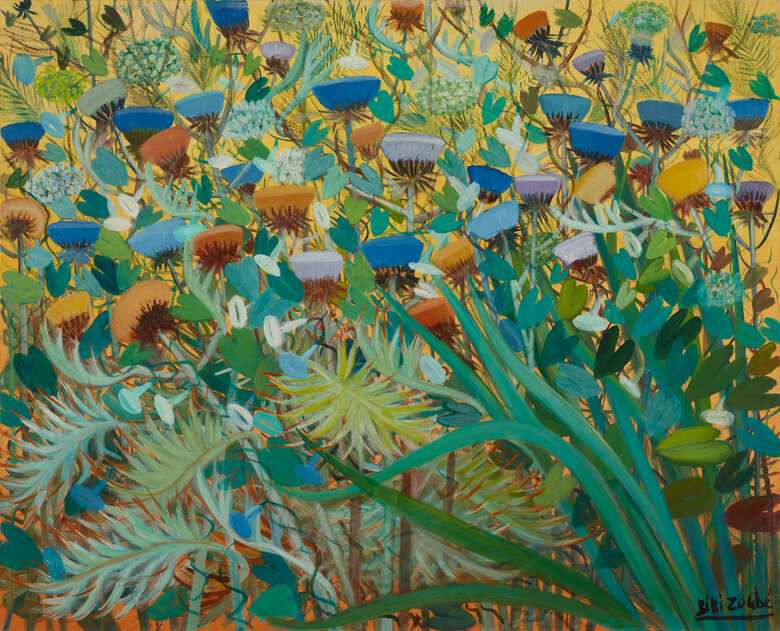 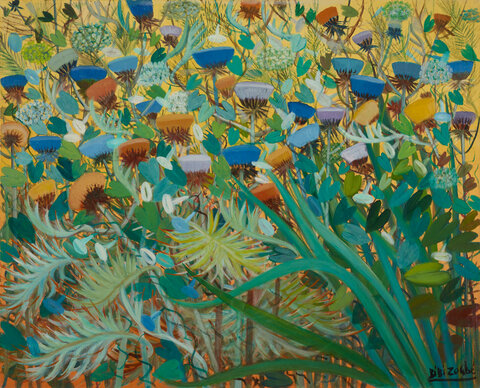 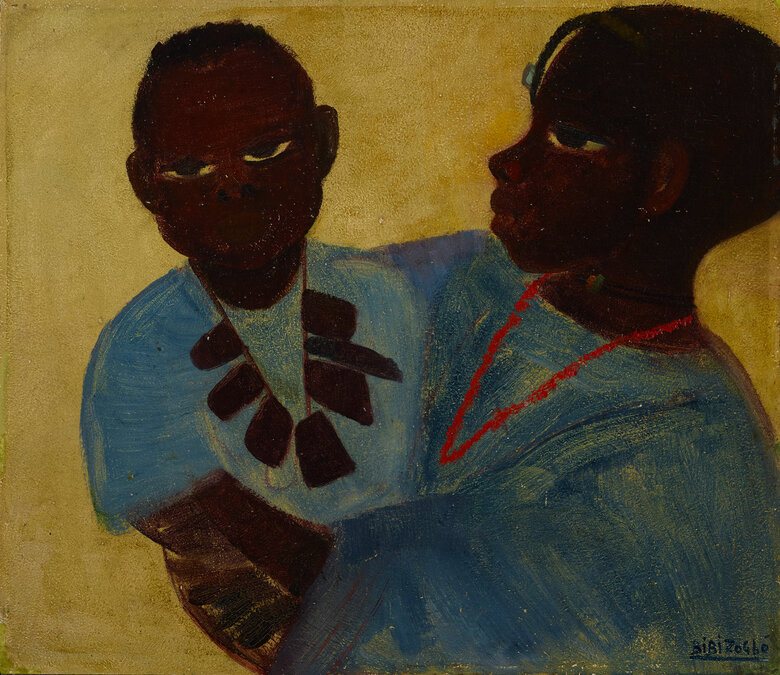 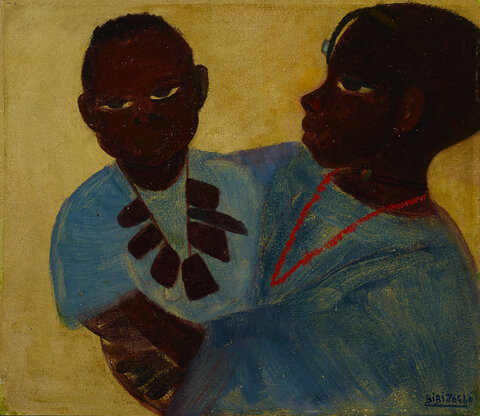 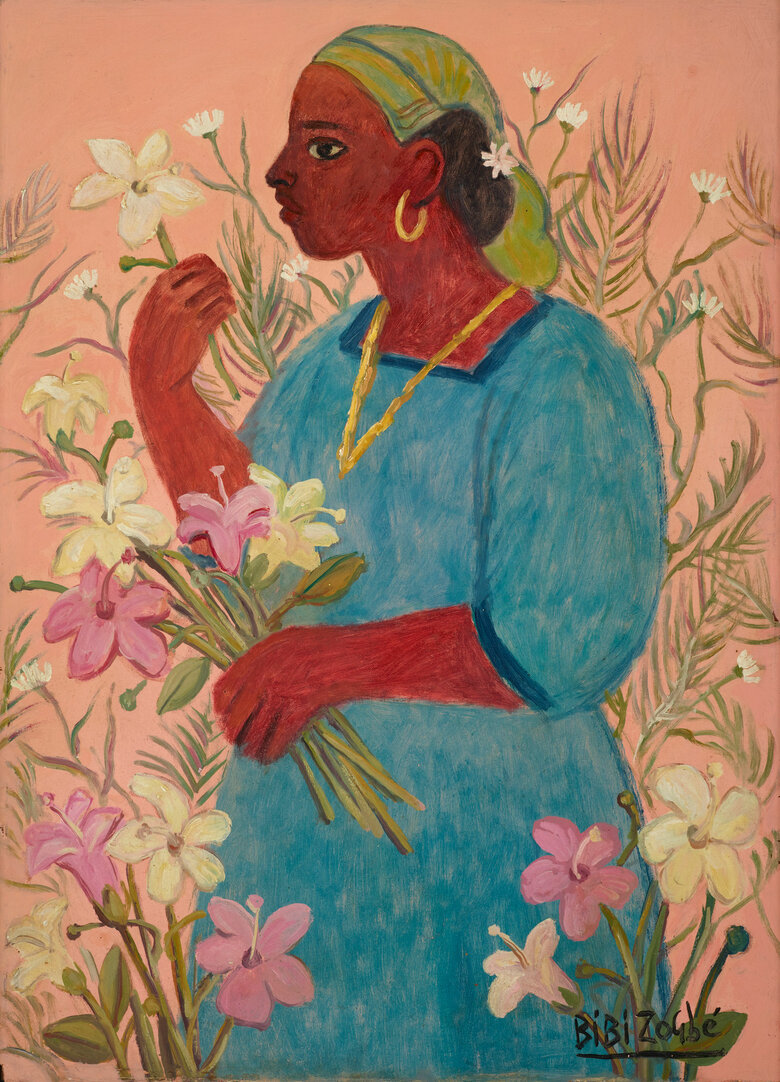 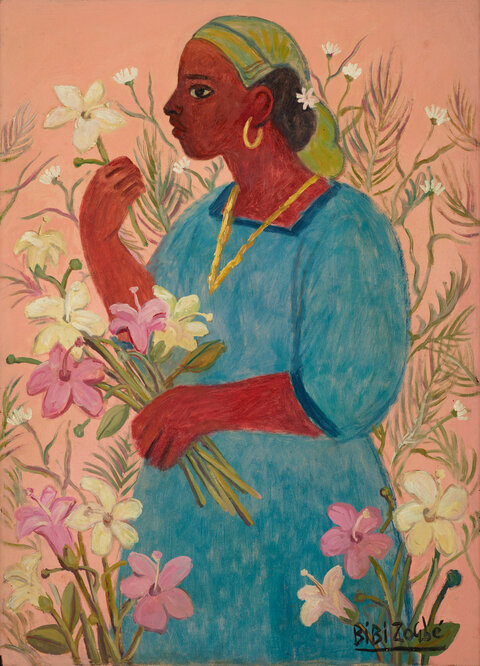 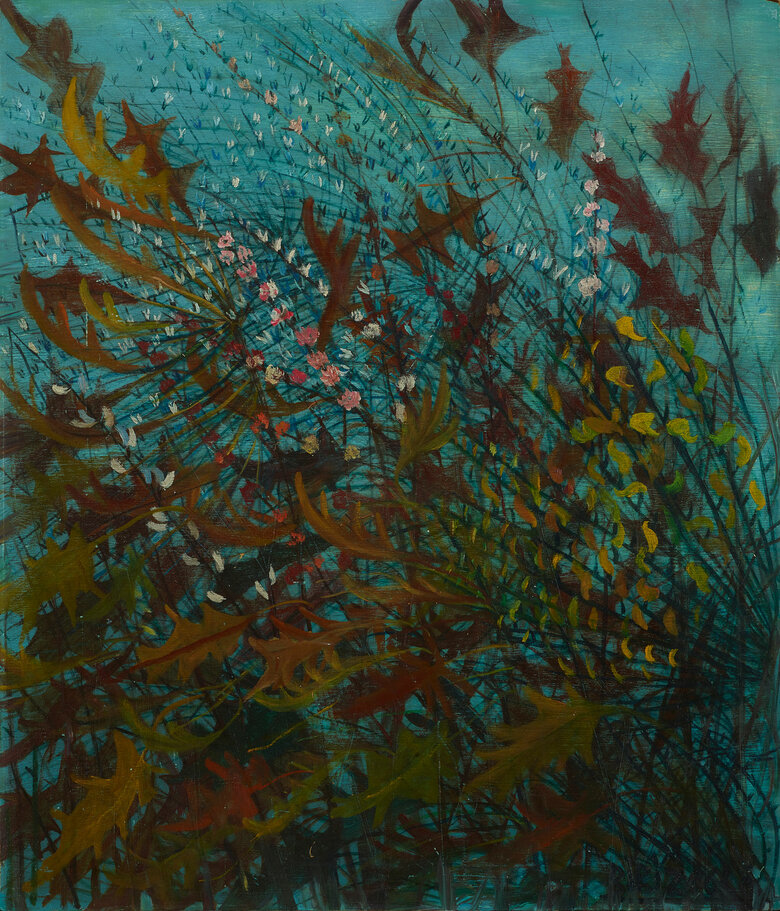 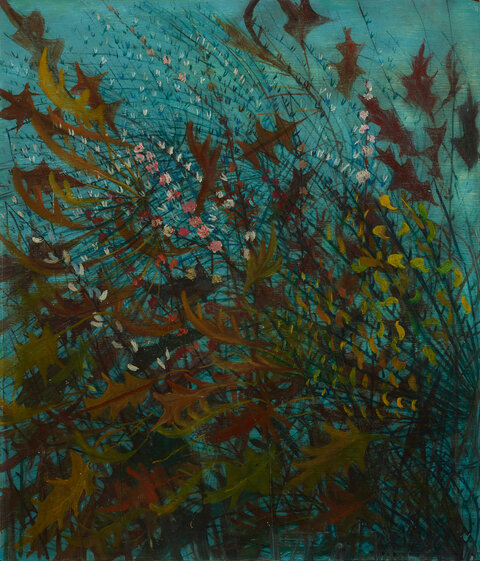