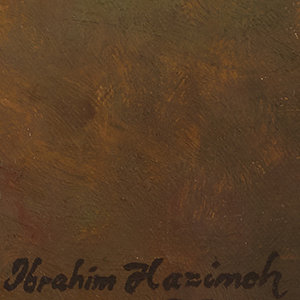 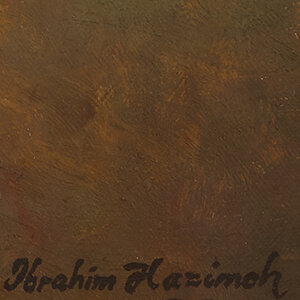 Ibrahim Hazimeh was born in 1933 in Acco, Palestine, and from a young age considered art a means of recording and processing his memories. When he and his family were driven from their home during...

Ibrahim Hazimeh was born in 1933 in Acco, Palestine, and from a young age considered art a means of recording and processing his memories. When he and his family were driven from their home during the Nakba of 1948 they were relocated to a detention center in Lebanon, where there was no paper in sight; the young artist, undeterred, asked men for their old cigarette packs so he could sketch his fading visions of home on their blank interiors. Ultimately, the family resettled in Latakia, Syria, where Hazimeh worked as an art teacher and an accountant until 1952.

Though a teacher of art himself, Hazimeh was primarily self-taught up to this point; while he was in Syria, he began his arts education through correspondence courses at the Ecole de Paris de Dessin, winning prizes at both the 1957 Cairo Salon and the 1957 Fall Exhibition of Damascus mere years after beginning his formal training. Hazimeh was enrolled at the University of Graphic Arts in Leipzig, Germany from 1960 to 1967, first as an undergraduate and later as a graduate student under Professor Bernard Heisig. He completed his studies with distinction and relocated to West Berlin, where he worked as an art therapist in a psychiatric hospital from 1974 until 1993. In 1987, he became a member and spokesman of the Board of the Palestinian Artists’ Association in Europe, as well as the president of the Palestinian Committee of the UNESCO-affiliated International Association of Art (IAA/AIAP).

From the beginning of his career, Hazimeh’s prolific oeuvre has consistently focused on Palestine. Per the artist’s description, memories, “both beautiful and painful,” inspire everything the artist executes in oil paint, gouache, and watercolor, which explains not only the subject matter but the style in which it is portrayed. Hazimeh’s canvases are populated by Palestinian families, especially women dressed in the traditional thobe, engaged in quotidian activities like carrying baskets from the market. Behind them, humble villages or majestic cities seem to glow, brightly-colored doors and windows punctuating great shapes of white stone. While his earlier paintings are characterized by bold, black lines, the artist’s mature work is more fluid, taking on a hazy, oneiric quality one might easily associate with the act of reminiscing.

In addition to paintings that recall Palestinian life in dreamlike, idealized forms, Hazimeh frequently finds himself painting the Virgin Mary. Like all practicing Muslims, the artist was raised with respect for the mother of Christ, but he does not necessarily paint her with religious reverence. Instead, he seems to humanize the figure of Mary, celebrating her not as a saint or a holy vessel but as a Palestinian mother, in conversation with the ordinary women and children that populate his other works. For Hazimeh, women are the “fabric of the village,” custodians of Palestinian culture and heritage, and are thus central protagonists in all of his work. Several of Hazimeh’s paintings of Mary have been used in special-edition postage stamps, issued by the Palestinian Authority in the 1990s as part of an “art for peace” campaign centered in Bethlehem.

The artist’s work, however serene and personal, has not always been uncontroversial. In 1989, paintings by Hazimeh were meant to hang in the State Parliament of Bremen, but then-Senate President Dieter Klink refused to authorize the exhibition on the grounds that it was “too political.” This created a minor uproar among Parliament members, many of whom did not take kindly to Klink’s censorship. Contemporary media coverage pointed out that Klink had not even seen the paintings he had refused to show, and that his opposition made no sense given the institution’s history of displaying politically engaged art. The decision to cancel the exhibition was made in order to avoid offending the Israeli community with which Klink had formed close ties, and was seen by many as a biased and unfair judgment.

For his part, Hazimeh has always attempted to use his art in the service of peace. In keeping with his belief in art as a catalyst for positive change, the artist painted the Palestinian “Buddy Bear” for the United Buddy Bear exhibition in 2002. This touring exhibition consists of approximately 140 fiberglass bear sculptures, each of which is painted to represent a different country; between 2002 and 2019, the “ambassadors” visited over 25 countries in Asia, Europe, and Latin America. When displayed, the two-meter-tall bears are arranged in a massive circle, holding paws, to represent the importance of international cooperation, and entrance to the exhibit is always free, regardless of its location. Since 2018, auctions of bears and related donations have raised over 2.5 million dollars for the United Nations Children’s Fund (UNICEF). Hazimeh outfitted his bear in intricately painted tatreez, traditional, brightly-colored Palestinian embroidery, as well as the black-and-white kufiyyeh that has become an international symbol of Palestinian resistance.

Ibrahim Hazimeh continues to live and work in Berlin.

Ibrahim Hazimeh - Excerpts From The Documentary “The Art Residency” 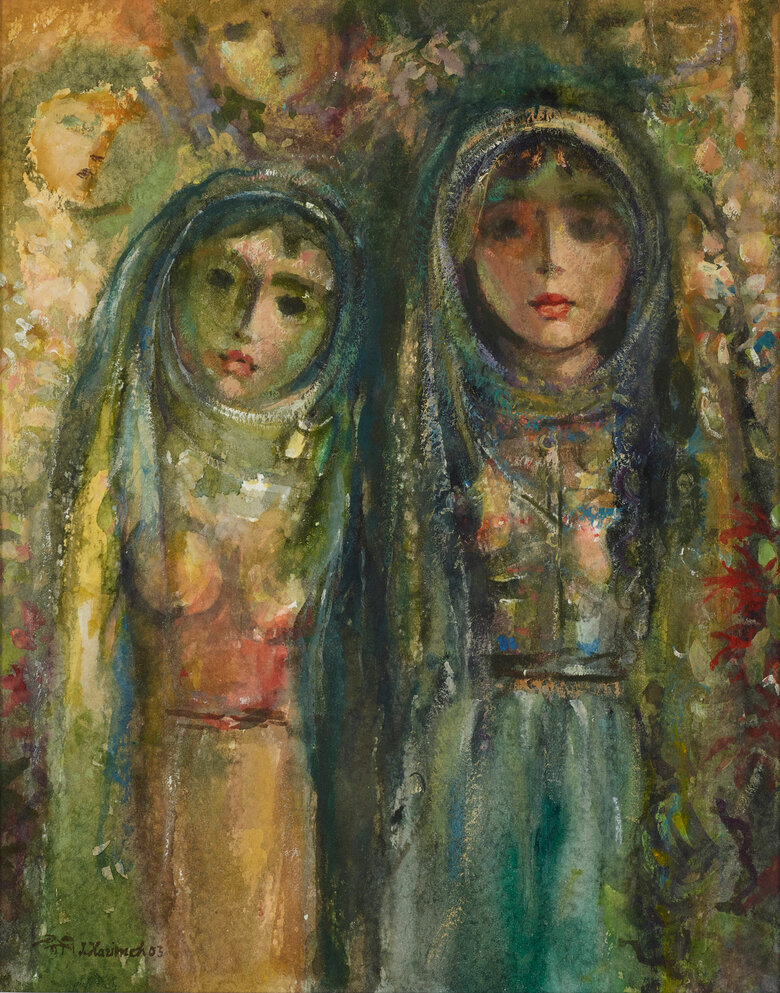 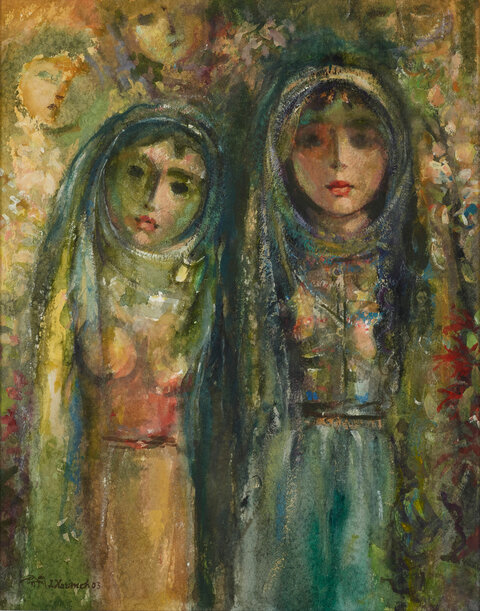 Under the Almond Tree 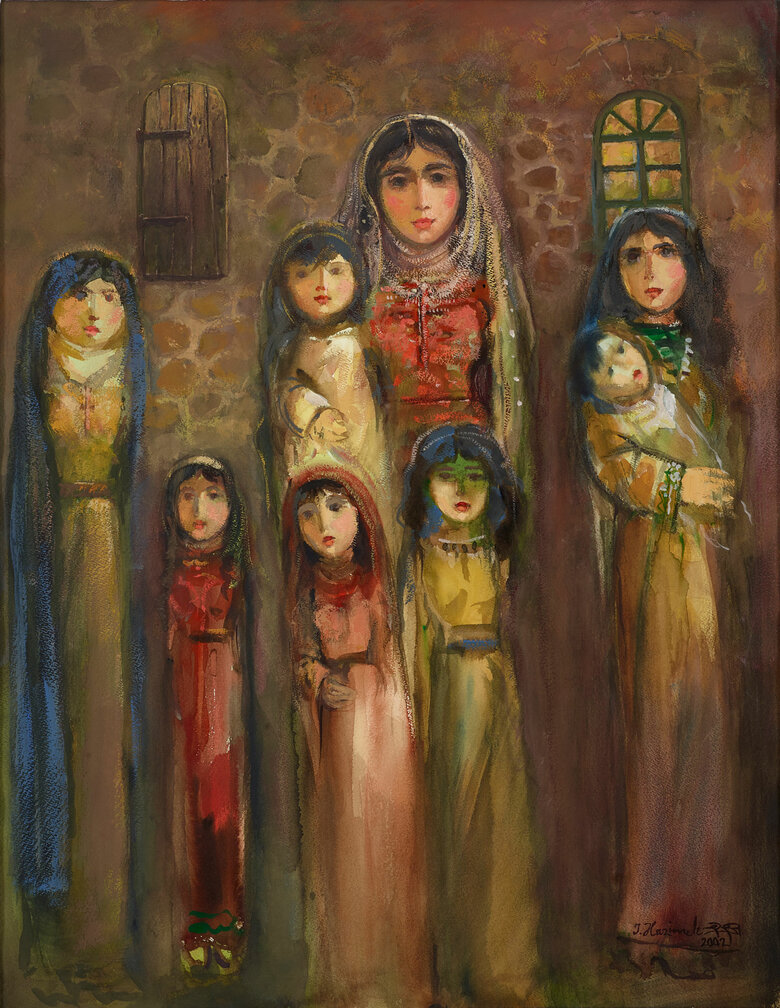 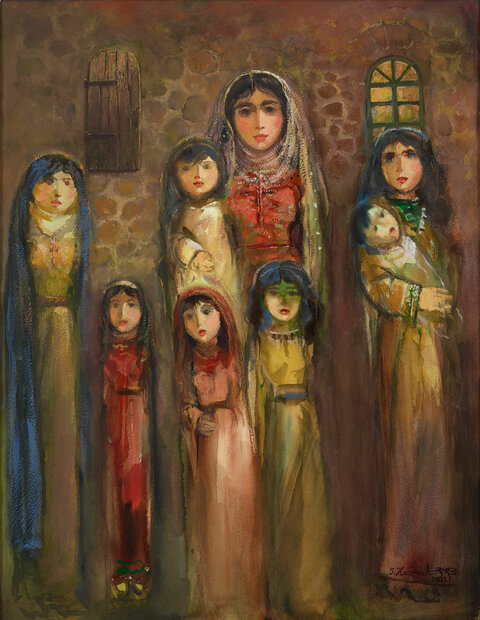 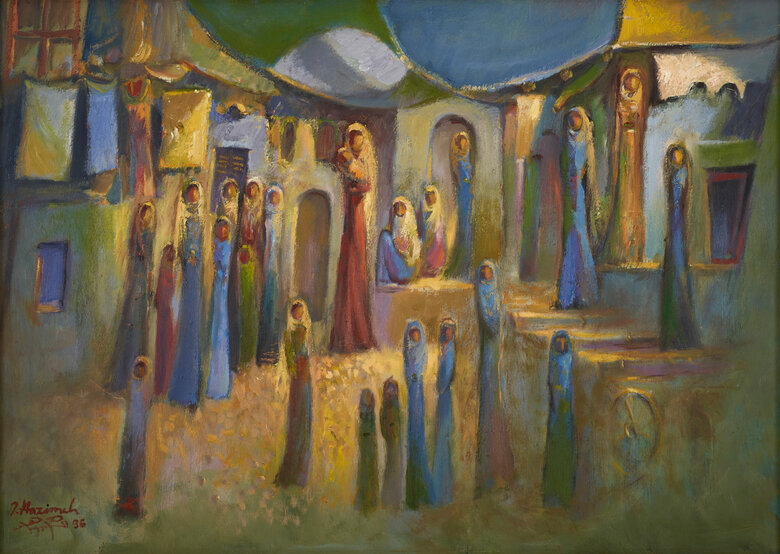 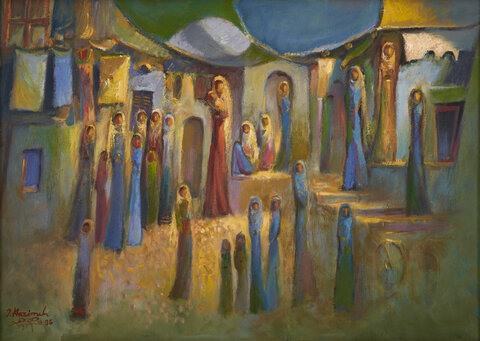 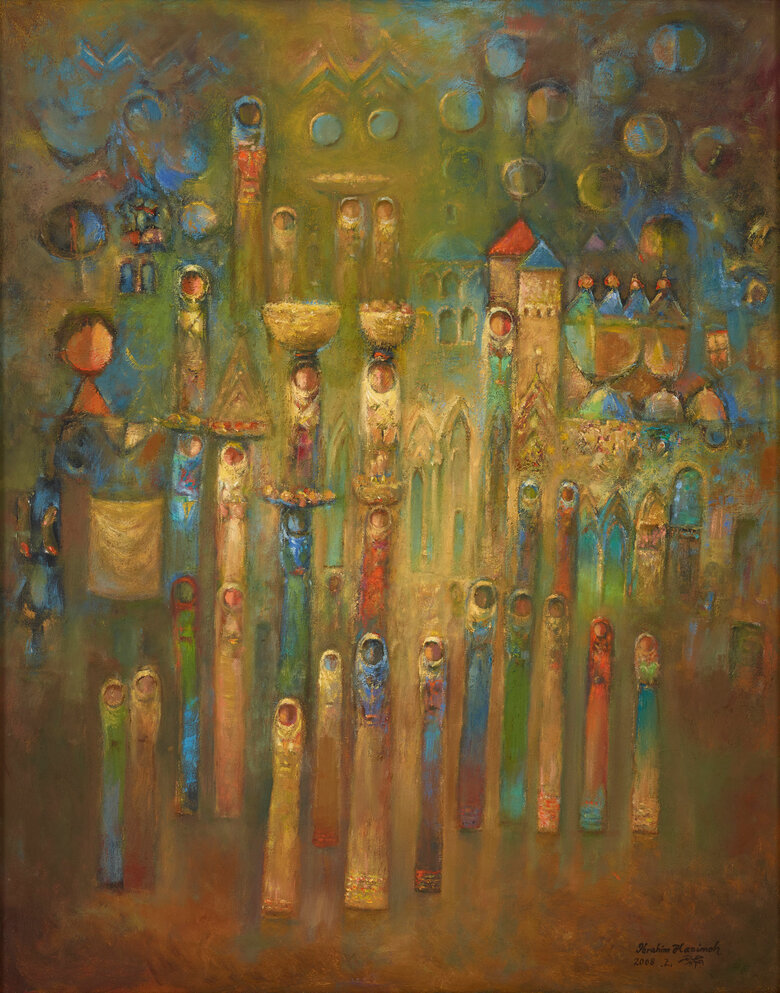 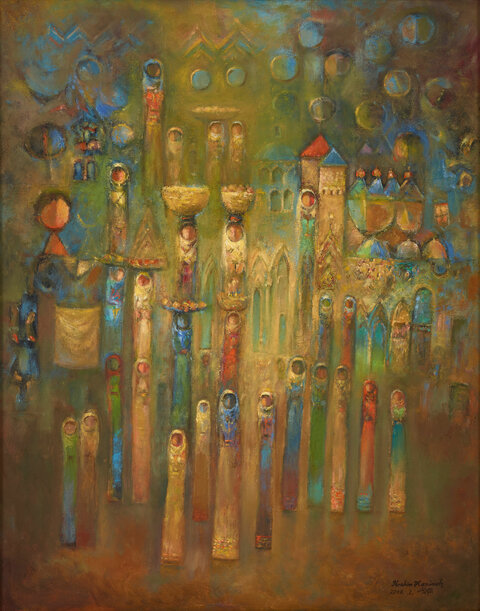 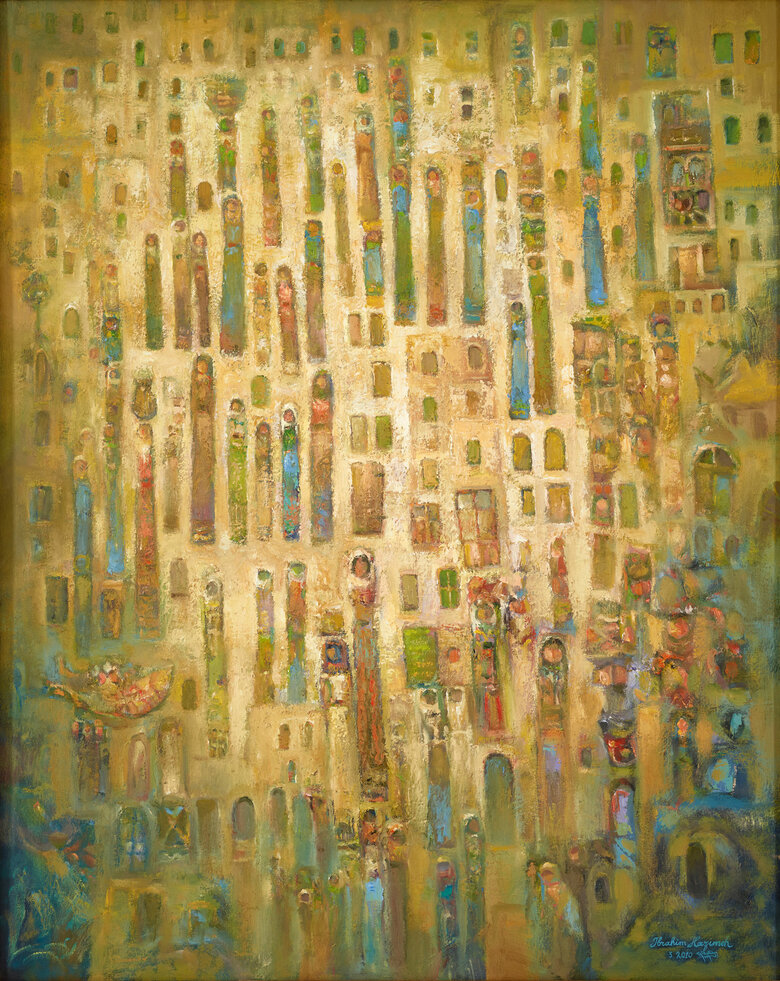 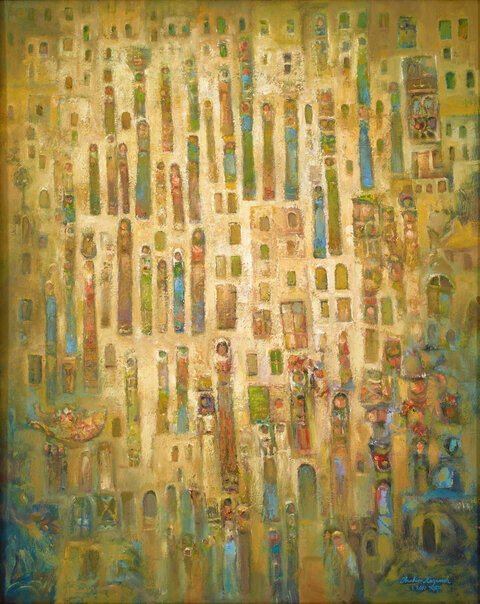 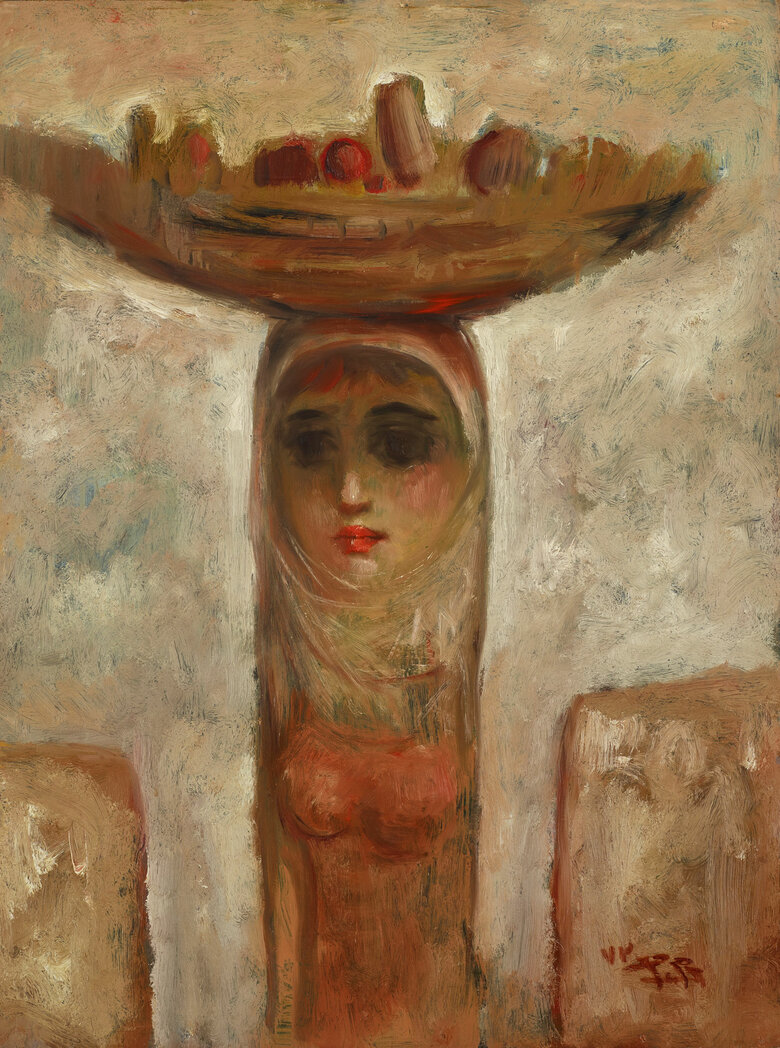 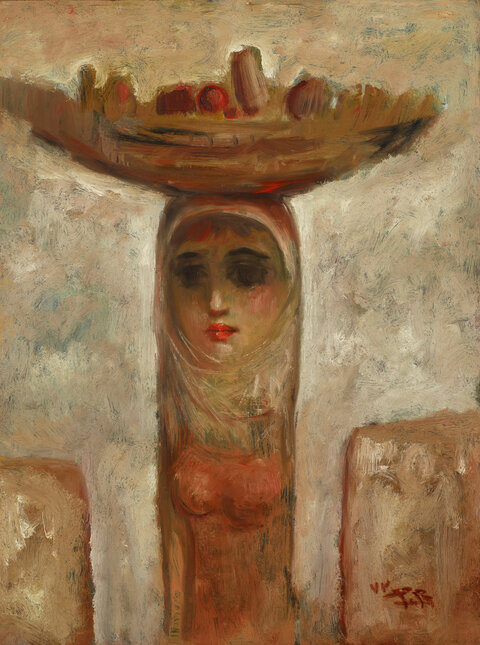 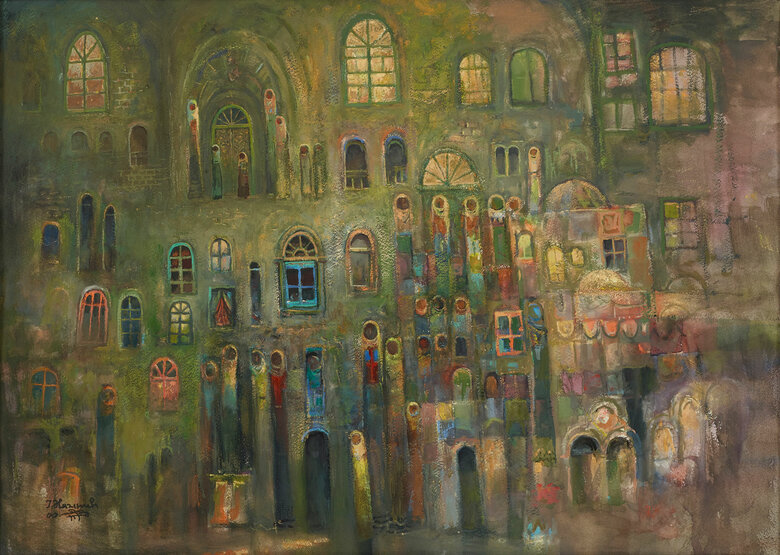 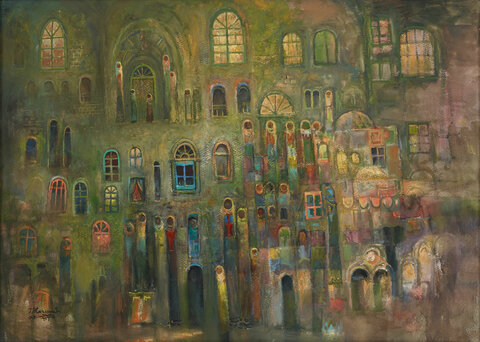 The Old Gate to the City 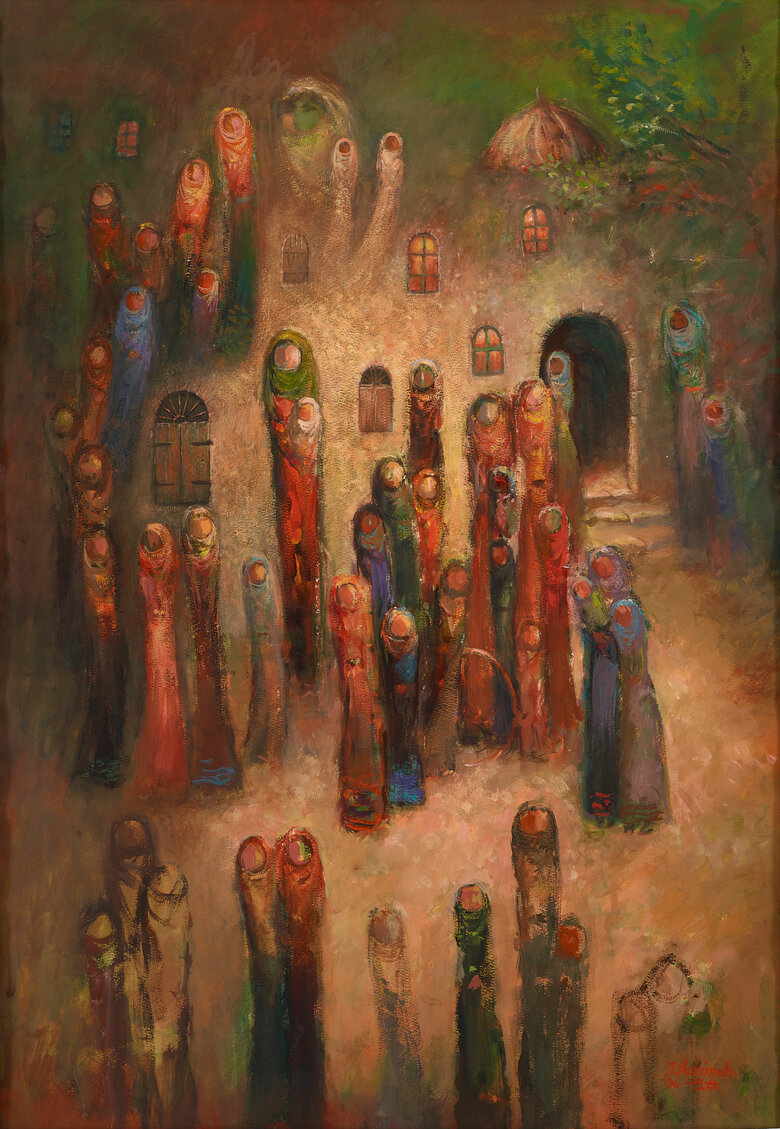 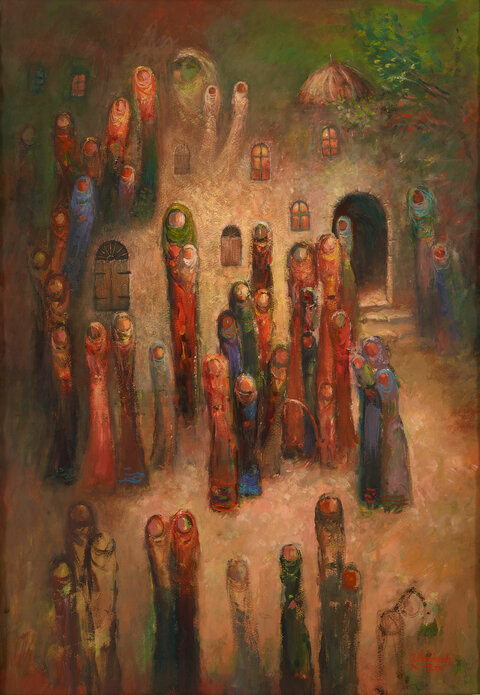