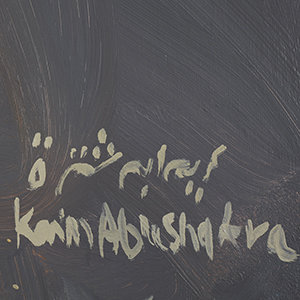 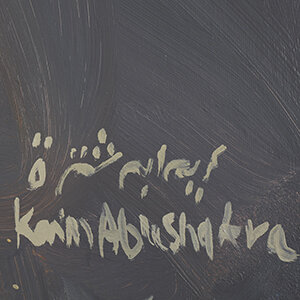 Karim Abu Shakra is a Palestinian artist born to a Muslim family in Umm El Fahem in 1982. He graduated from Bet Berril Fine Arts School in 2000 and has since been engaged in his artistic journey. His oeuvre, which consists primarily of oil and acrylic paintings, depicts socio-political issues and revolves around the sacred bond between the land of Palestine and its people. Abu Shakra’s work is deliberately addressed to the Israeli viewer, emphasizing the defiant resilience of Palestinian identity in the face of the occupation.

Karim was raised in an artistic family, inspired and encouraged by his late uncle, Asim Abu Shakra (1961-1990). Asim was a noteworthy artist, famous for paintings of potted cacti that allegorized the isolated, uprooted existence of Palestinians living in present-day Israel. The cactus plant, or sabra, symbolizes endurance and resilience in the Palestinian context and has been appropriated by Israelis as a term and symbol designating a Jewish citizen born in Israel. The sabra became a prominent subject in the work of artist Walid Abu Shakra (b.1946), Karim’s great-uncle, and subsequently became a sort of family legacy, taken up by Asim and then Karim.

The stories narrated by his family about the tragic history of Palestine infused Abu Shakra’s work with a sense of despair and a call for hope. Influenced by the works of his uncles, Karim depicted the hardship and resilience of the Palestinian people through the cactus plant. As Walid and Asim had done before him, he brought his style to the subject, deploying a brilliant color palette and loose, painterly brushwork that adds a layer of plasticity to his works. In some cases, his cacti take a turn for the surreal: drawn from the two-dimensional form of the prickly pear fruit, its elliptical and triangular shapes morph into birds or paper planes to perhaps symbolize messengers of hope. His paintings derive luminosity from the high contrast Abu Shakra creates between the muted, often dark tones of his background and the brilliant, artificial colors with which he paints his cacti. By reflecting on Western art history and local inspirations, Abu Shakra created works that allude to Van Gogh: in Shoes (2010), the artist references Van Gogh’s celebrated images of boots. Moreover, he portrayed the subject matter of the wilting sunflowers, one of the Dutch Post-Impressionist’s favored subjects. The pointillism visible in some of his paintings seems to suggest both European post-impressionism and local folkloric motifs, synthesizing multiple cultural influences.

Recent paintings, circa 2016-2017, have featured amorphous, hybrid creatures, combining animals such as horses, whales, and birds with olive branches in one image. The artist aims to reflect on the relationship between the human and the humane through his symbolic figures, which question boundaries, limits, and distinctions within the natural world. His images are imbued with a sense of nostalgia as well as a sense of hope, imparted upon the viewer by the bright color schemes and vivid, fluid imagery of canvases like Paradise I (2017). Others, such as State of Reality III (2016), are painted in more profound, more subdued tones that are evocative of night and feature dense forms that lend the canvases a sense of deep melancholy.

Karim Abu Shakra still lives and works in Um-Al Fahem, where his family is presently struggling to open the first museum of Palestinian art in the occupied land. 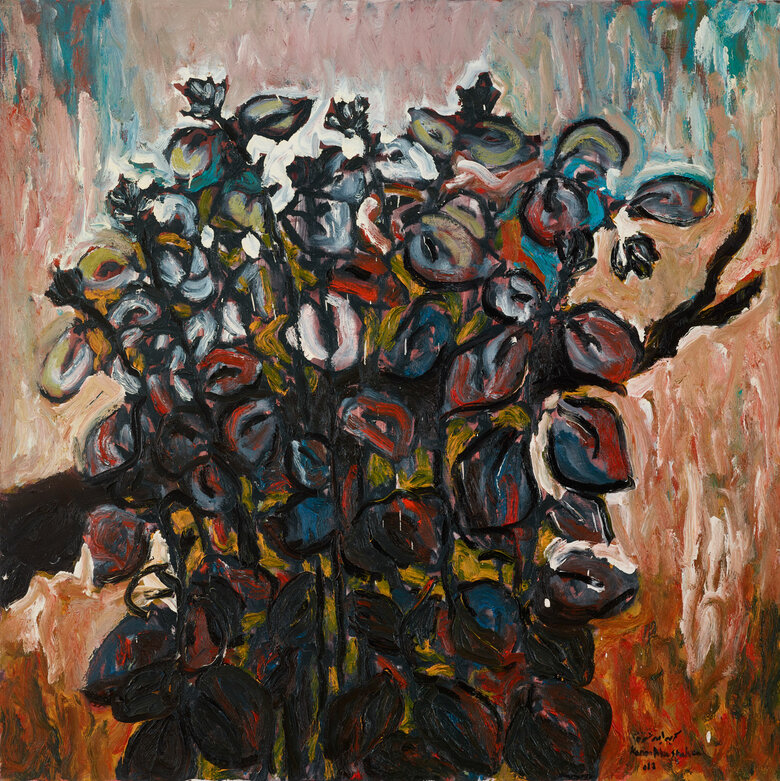 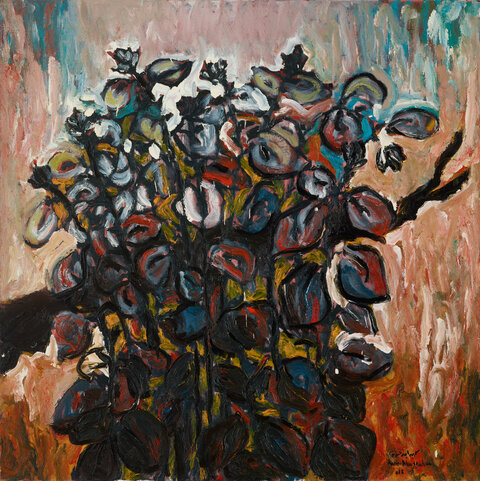 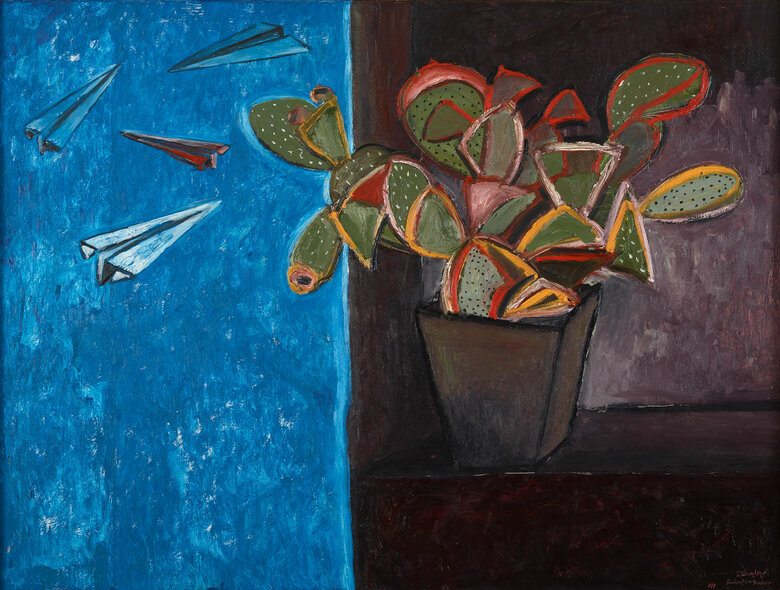 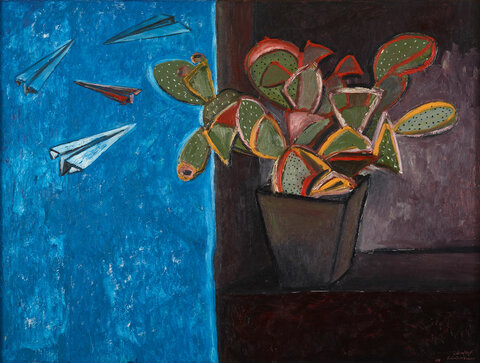 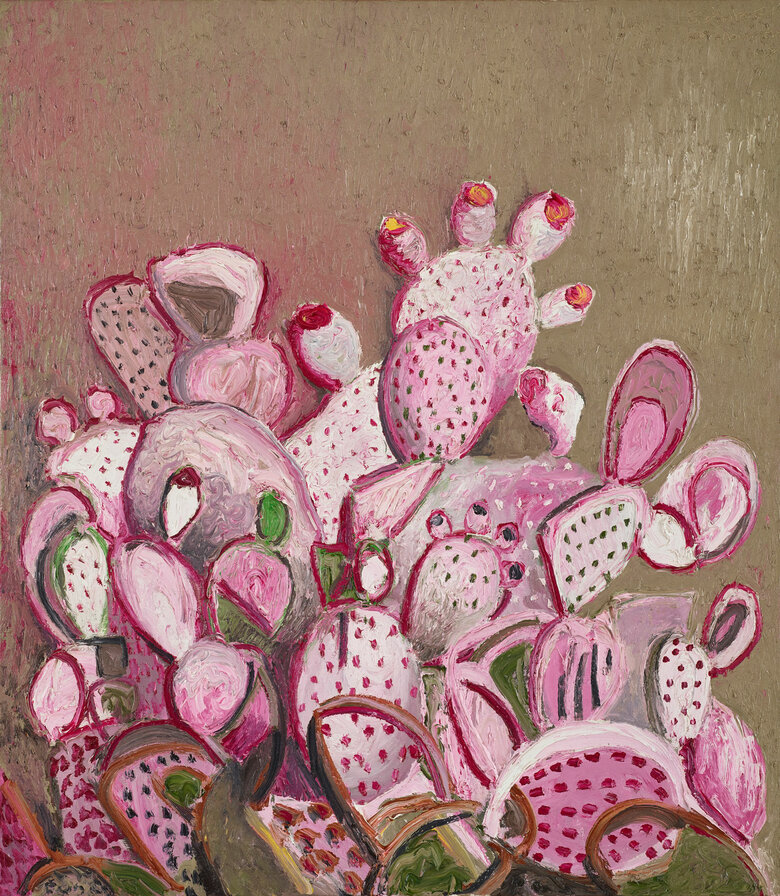 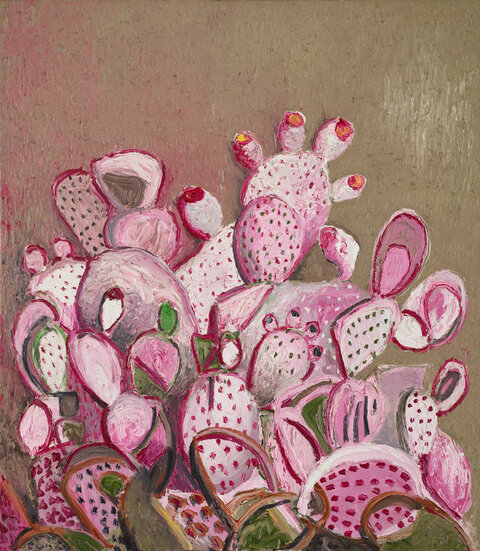 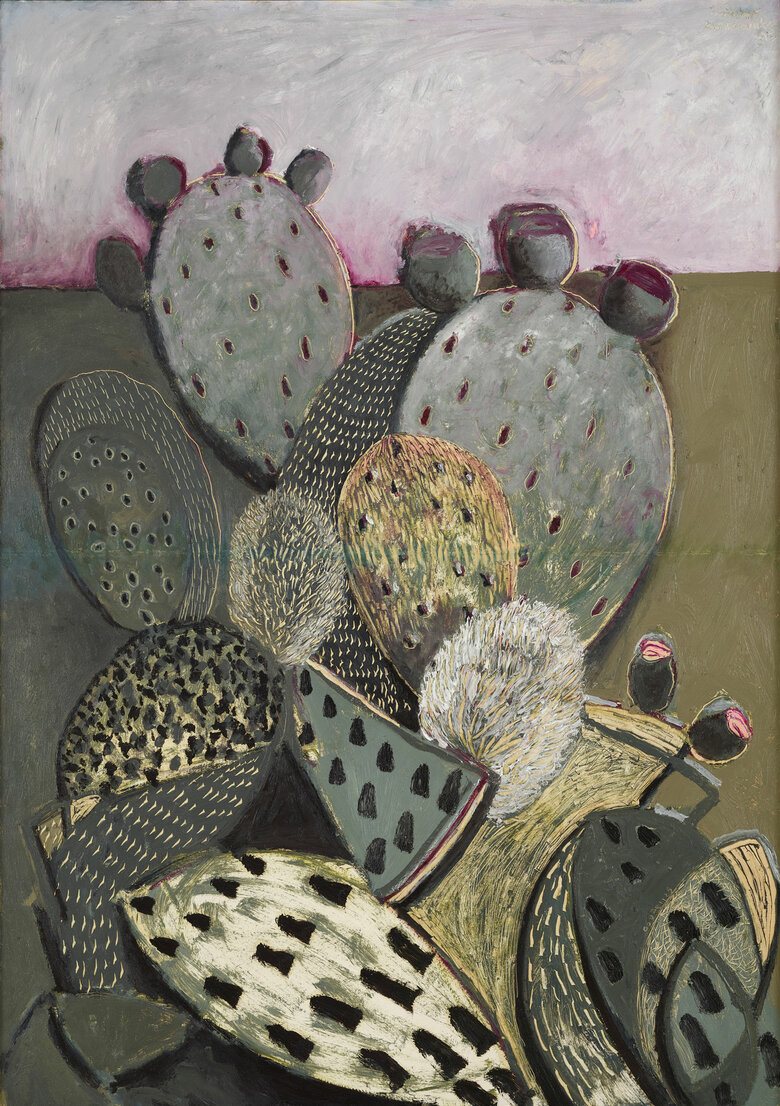 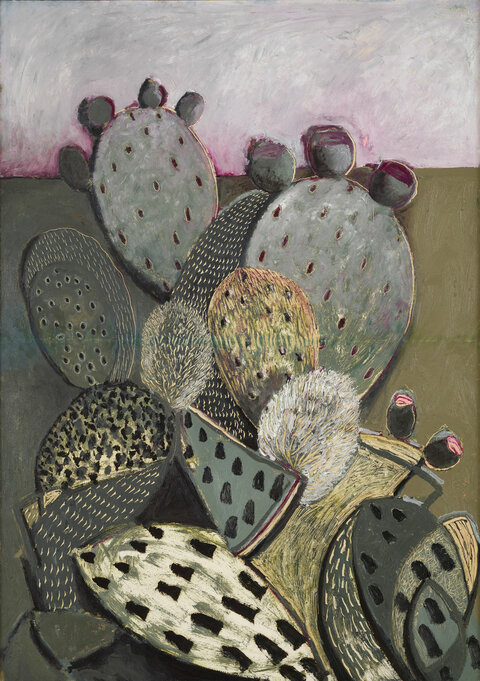 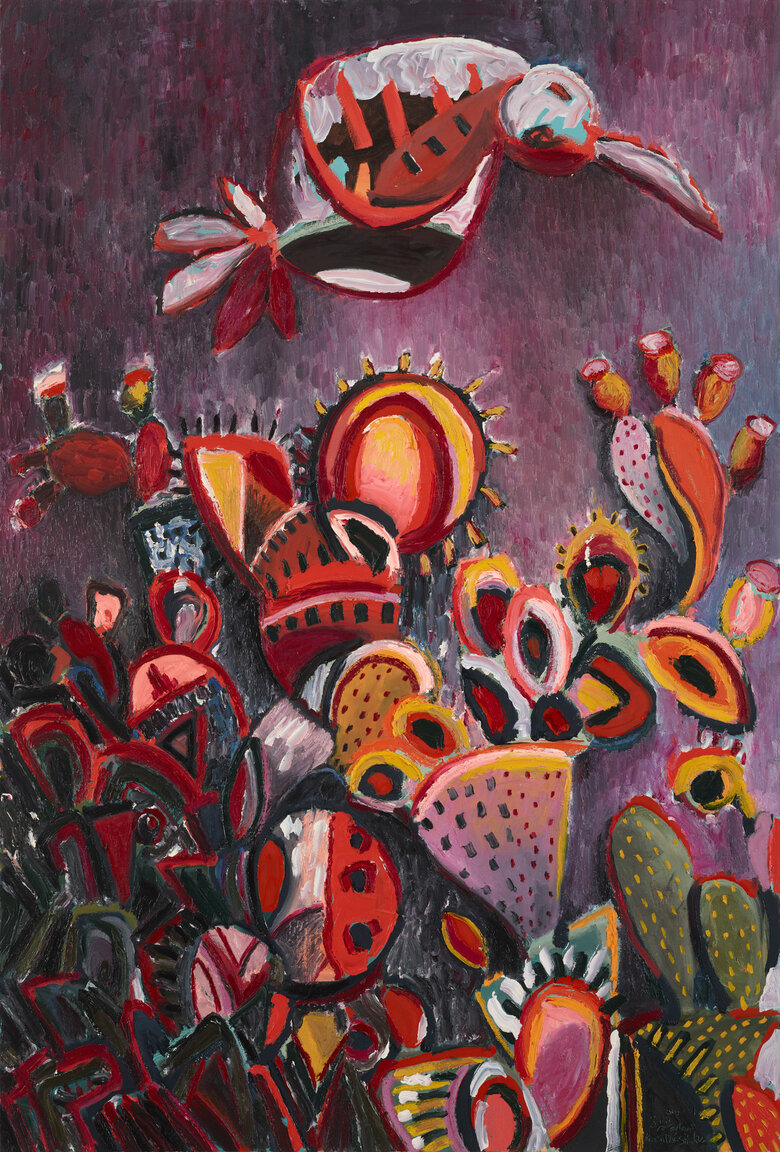 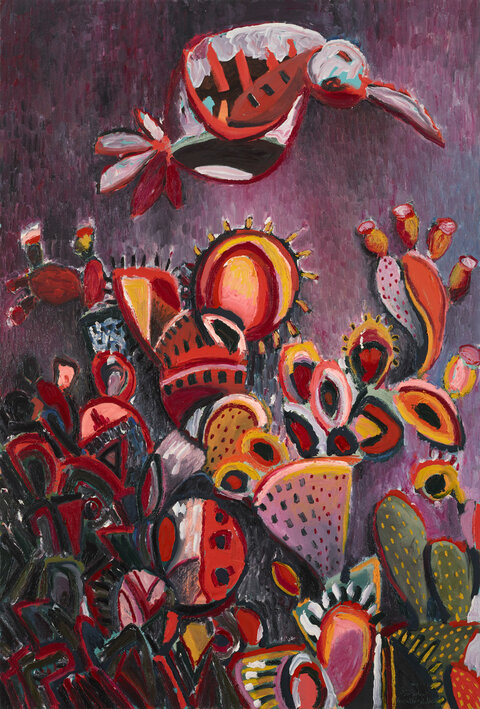 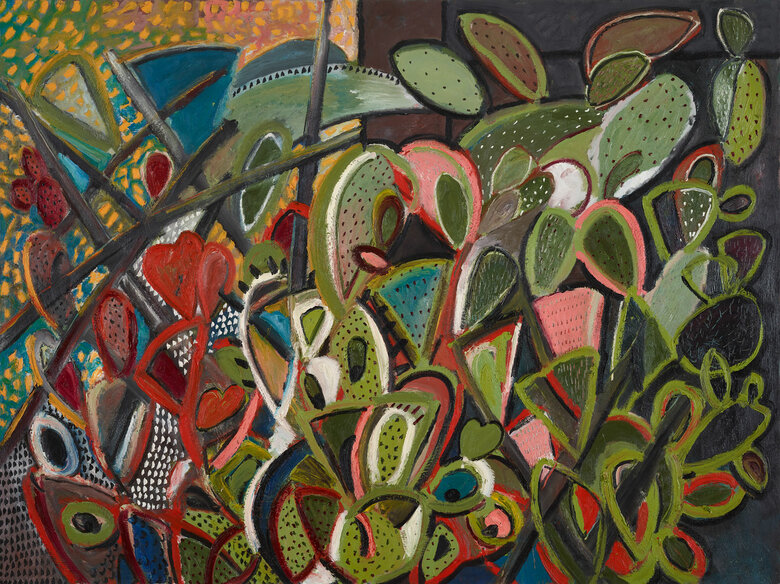 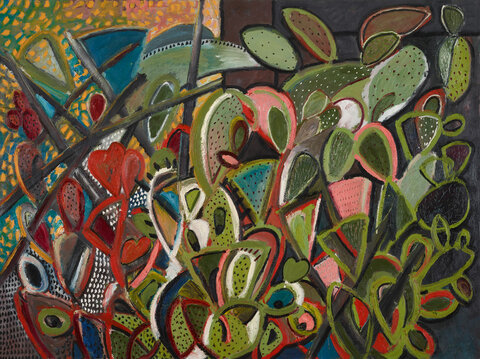