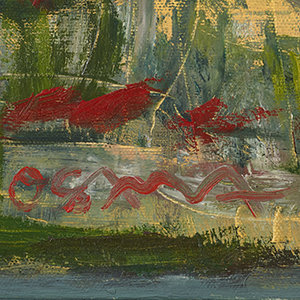 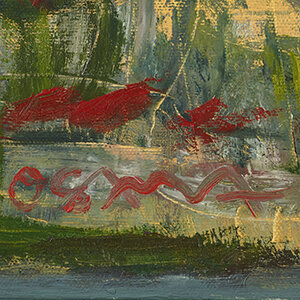 Born in 1957, in Nahf, a town in Galilee, Palestine, Osama Said is an expressionist painter who trained in banking before shifting to fine arts. He studied at the Bezalel Art Academy in West Jerusalem then moved to Germany in 1981. He studied at the Hochschule der Künste – University of the Arts in Berlin, where he trained under renowned German -Syrian painter Marwan Kassab Bachi and graduated with high honors. Said remained in Germany for sixteen years, working as a full-time artist before he moved back to Palestine. Upon his return, he was struck by the painful reality of life in the occupied territories.

As an artist who lived in exile and as one belonging to the Palestinian minority living within the state of Israel, Said depicts alienation and displacement in his art. While abroad, he painted Palestine from memory and evocative images of pastoral landscapes. He created figurative paintings featuring olive groves as a symbol of resilience and others, showing Mother and Son in which the mother represents the homeland and caretaker. Later, Said produced abstract paintings, ones suspended in time. Houses seemed reduced to vertical and horizontal brush strokes, and figures appeared hazy, reflecting a decaying temporality and a weakened existence over which he has no control. Said applies several layers of thick paint onto his canvases, which often appear as squeegeed in an attempt to erase their content. The artist re-acts the systematic effort exerted by the Israelis to eradicate the history of Palestine since the 1948 Nakba. The time-space relationship can be sensed in his depictions both in the images of emptiness or absence of people from their surroundings. Jerusalem, for instance, a recurrent theme in Said's oeuvre, has no architectural representation in his abstract expressionist paintings. Instead, one can indicate its presence from the yellow paint clustered hinting to the dome of the rock against a blue background or in a setting of earthy red.

The Exodus From Jaffa

From Here the Settlers Passed