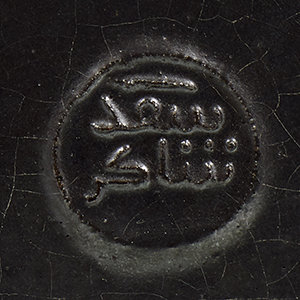 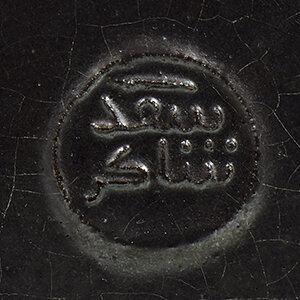 Written by Mysa Kafil-Hussain Considered a pioneer of ceramic art not just in Iraq but across the Arab world, Saad Shaker is known for creating delicate artworks blending modern abstraction with...

Considered a pioneer of ceramic art not just in Iraq but across the Arab world, Saad Shaker is known for creating delicate artworks blending modern abstraction with natural forms. Born in Baghdad in 1935, Shaker’s youth was spent moving from city to city due to his father’s career in the Iraqi postal service. From Najaf to Hilla to Fallujah, he experienced may different environments and communities in Iraq before settling back in Baghdad in the mid-1950s. During his school years he developed a natural talent for drawing, and even won an award as a teenager in a local exhibition, for which his prize was a watch with a photo of King Faisal II.[1] Although his family was hoping Shaker would choose a career in the army, their opposition didn’t stop him and he joined the Institute of Fine Arts in 1957, specializing in ceramics and graduating in 1959.

The ceramics department had only recently been set up in 1955 at the behest of Ian Auld, a British artist who had settled for many years in Iraq. Teachers at the Institute, such as Jewad Selim and Faeq Hassan, celebrated the new department, however Auld was an artist and not an administrator, and so the running of the department was rather neglected.[2] Auld left after 2-3 years, and his former colleague from London, Valentinos Charalambous, took over. Charalambous arrived in 1957 and ended up staying in Iraq for thirty years,[3] teaching countless Iraqi ceramicists and especially having an impact on Shaker. He greatly impressed Charalambous with his natural talents, immediately seeing the depth of Shaker’s sophisticated artworks.


The forms.. strange as they may appear, seem to possess an inner life of their own, and an organic strength, which force us or rather convince us, to accept them. They owe this “inner life” and “organic strength” to the multitude of common elements in the universal laws of growth in nature, be those of shells, cacti, or the human figure, which the artist carefully observes and obeys, and which constitute both backbone and muscle of his creations.[4] Valentinos Charalambous on Saad Shaker’s work, 1971

Shaker was dedicated to the craft, throwing himself into his studies and his practice, even spending evenings at the Institute, where he would bump into other art students such as Nouri al-Rawi and Kadhim Haydar.[5] In 1960, he received a scholarship to study in London, where he attended the Central School of Fine Arts, graduating in 1963. After his course, he worked as an art assistant at the school for two years, and afterwards also at Harrow College in North West London. Whilst working, he also took part in an exhibition in 1964 for British ceramic art organized by the Danish Ministry of Culture, impressing the judges and winning one of three prizes. Shaker also visited numerous exhibitions in London, including a show of Japanese art, in which the ceramics left a great impression, with the artist struck by the elegance and strength of the artworks.[6] Despite learning many skills, especially with regards to glazes and heating techniques, as well as a great deal of mental and intellectual development, Shaker chose to return home in 1966, joining the Academy of Fine Arts in Baghdad as a professor of ceramic arts.

During the 1960s, Shaker’s style began to take shape, exploring geometric forms, the natural contours of the environment, and developing a growing confidence with his tools and materials. In the 1970s, he started to experiment with new shapes, especially rounded ceramics, as can be seen in 1971’s ‘Flowers from My Country’ in the DAF Collection, a colourful fusion of his affection for the organic and his love for his home. In his 1972 piece entitled ‘The Scream’, Shaker uses a rounded white ceramic form as a base for the “scream” to jump out from, perhaps an expression of frustration due to ongoing political issues in the region, both of which he would occasionally allude to in his work.[7] In 1976, Shaker, alongside five other artists, represented Iraq at the Venice Biennale, establishing his position as one of Iraq’s most important artists of the period.

In the 1980s and 1990s, Shaker continuously developed his skills and styles, occasionally experimenting with more monochromatic works, but also further exploring the connection with nature and its affinity with the human form. There are many works by him in the DAF Collection from the 1990s: ‘Tree of Life’, ‘Freedom’ and ‘Eruption’ from 1996; ‘Ripple Effect’ and ‘Architecture’ from 1997; ‘Homage to Valentinos’ from 1998, and ‘Mobile Structure’ and ‘Volcano’ from 1999. All beautifully intricate, minimalist and sensitive, these ceramics are fantastic examples of Shaker’s desire to create both balance and conflict between shapes, sizes, textures and colours, often all together in one delicate artwork. In 2000, he created ‘Compatibility’, also in the DAF Collection, in which we see him consider the use of magnetism and space, in a shape which simultaneously feels both shell-like and human. The gold is especially interesting here, the use of which is perceived as Shaker’s unconscious desire for unity between Islamic art traditions and modernity, according to art critic May Mudaffar.[8]
Sadly, in 2005, Saad Shaker passed away. His son, Delair Shaker, also followed in his father and mentor’s footsteps and became an artist, having spent many years in his fathers studio as a child. Delair, reflecting on his father’s impact, remarked that “the Iraq that I grew up in was shaped by my father’s hands and his unconditional love for his country”.[9] Unfortunately, much of Shaker’s work was damaged or stolen during the 2003 war and subsequent years of instability, but the legacy of his ingrained connection with the natural world, his dexterity and mastery of clay, and his ability to make even a traditional dish into a canvas, forever cements his achievements and natural artistic talent into the history of modern Iraqi art.

[9] Samar Faruqi, 2011. “Art as a ‘Psychololgical Outlet: Expatriation and The Work of Contemporary Iraqi Artists”. In Art in Iraq Today, 2011

From the Ocean to the Gulf and Beyond: Arab Contemporary Art, Jordan National Gallery of Fine Arts, Amman, Jordan

Member of the Iraqi Artists Society

A TRIBUTE TO RAFA NASIRI 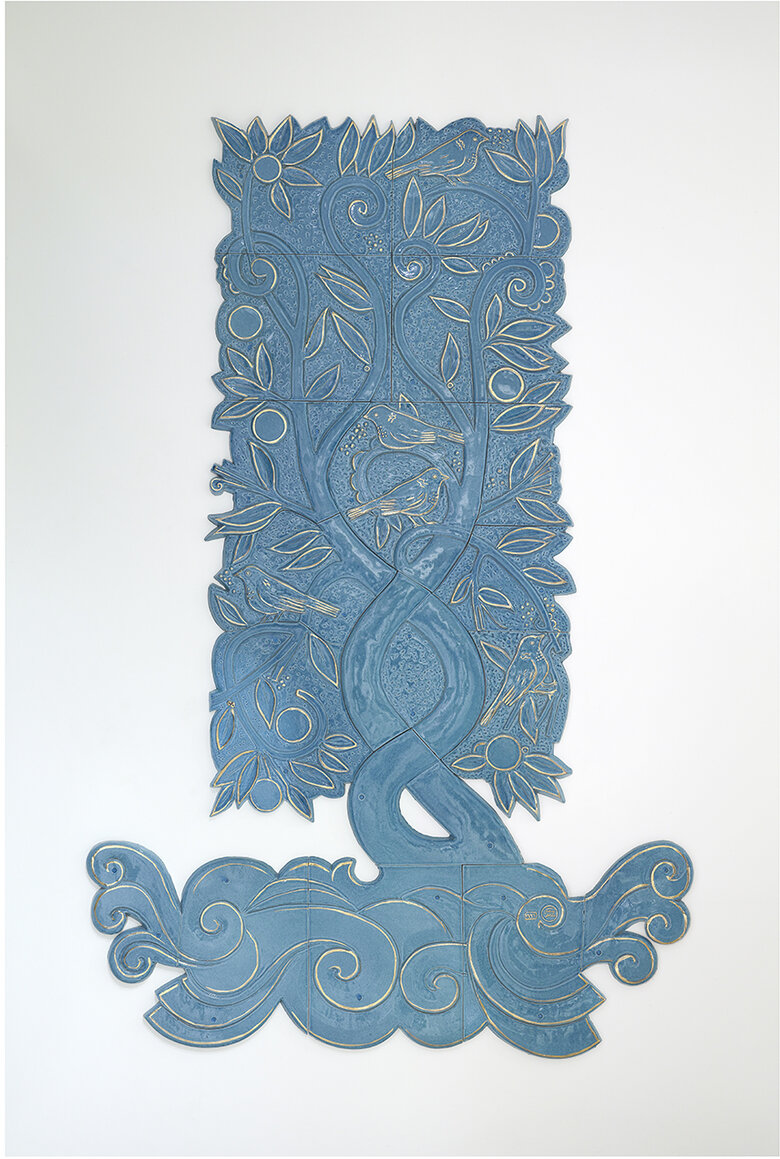 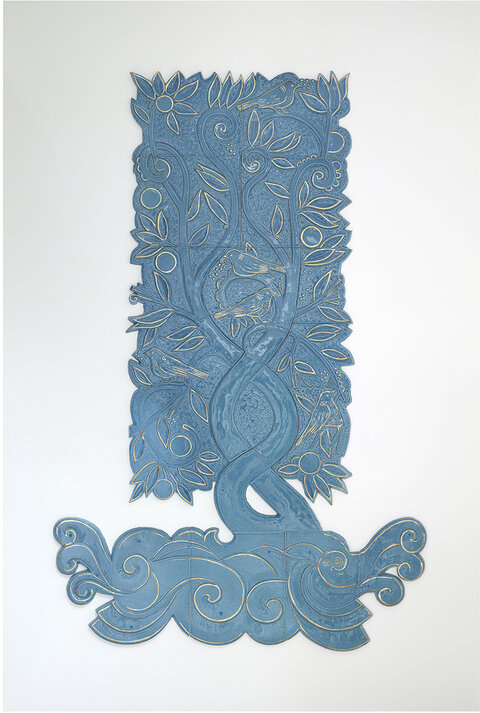 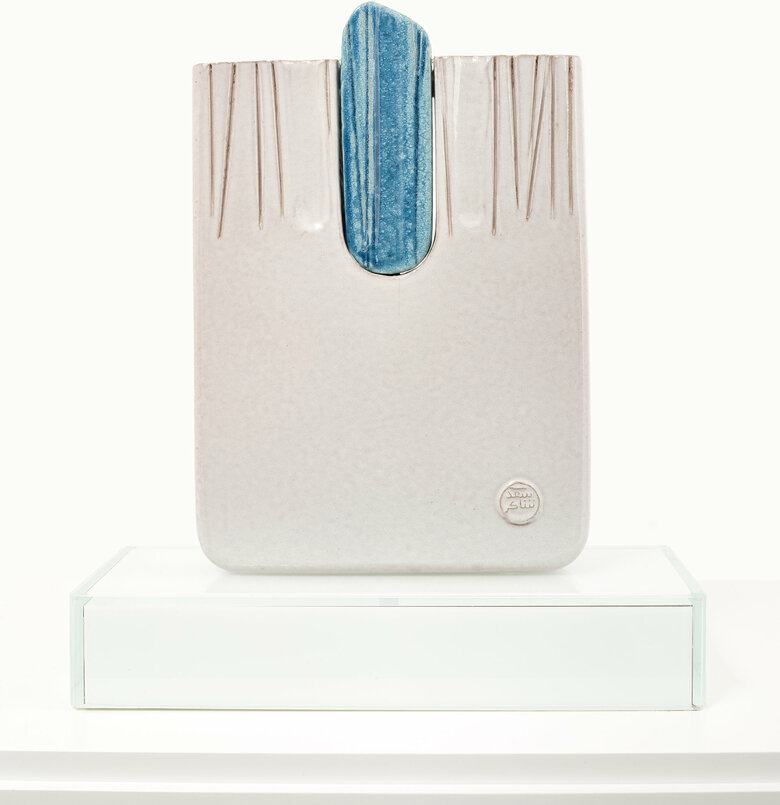 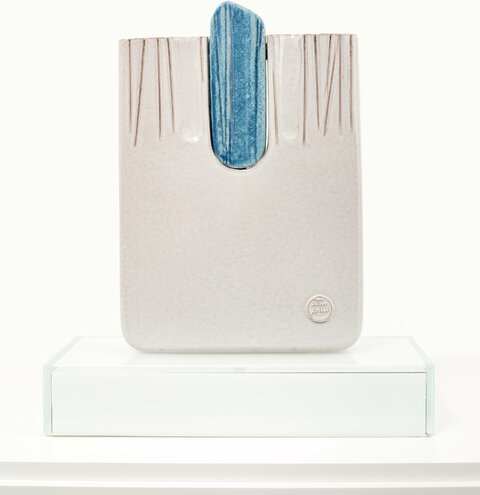 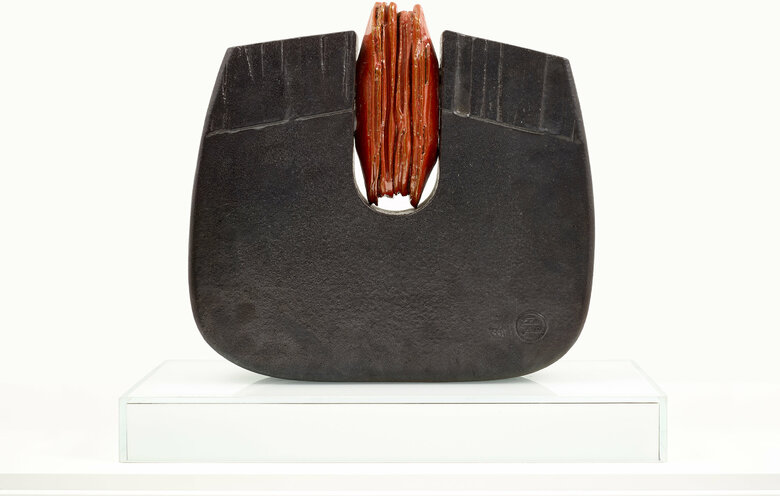 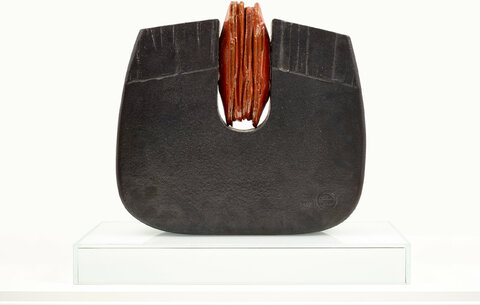 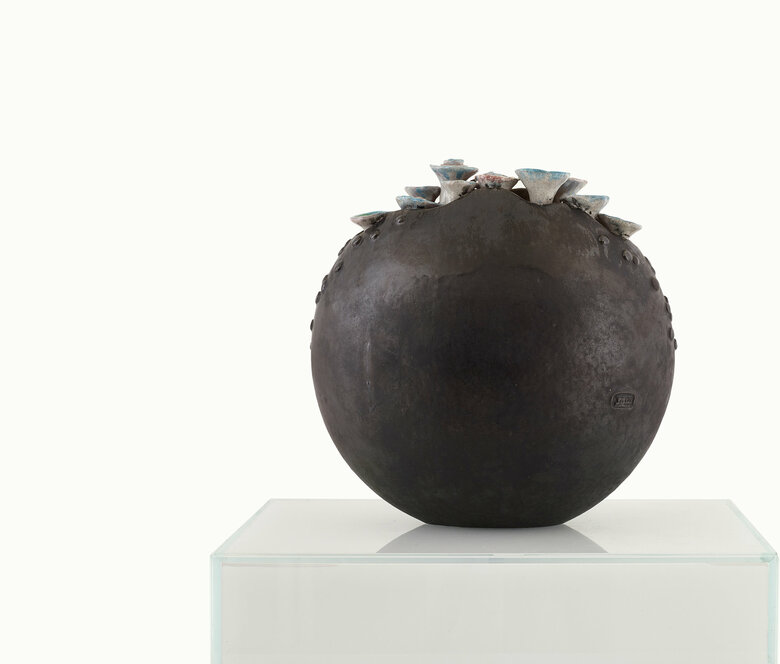 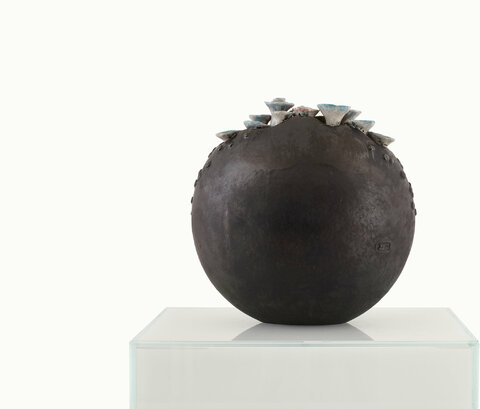 Flowers From My Country 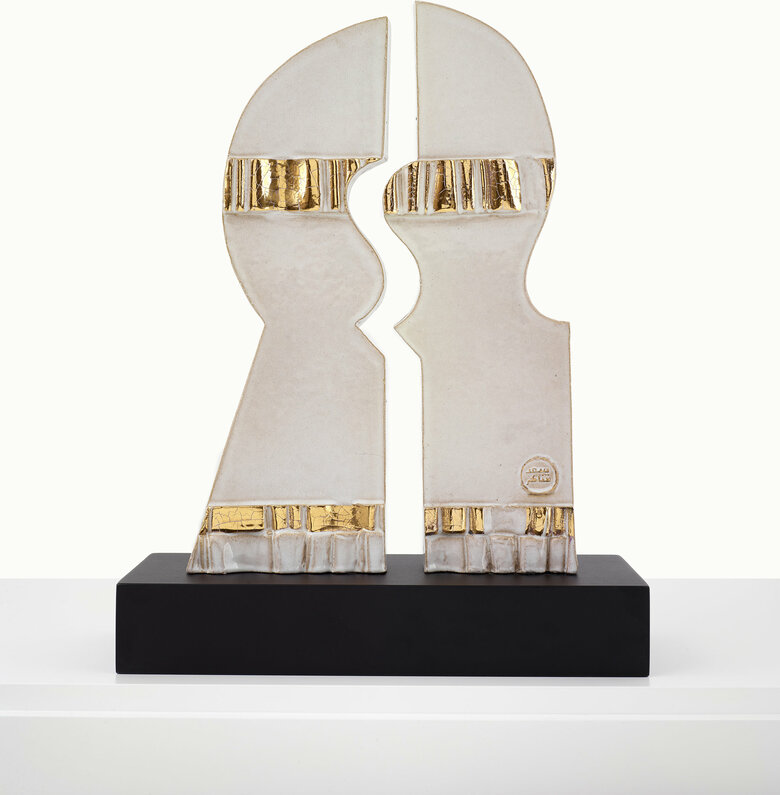 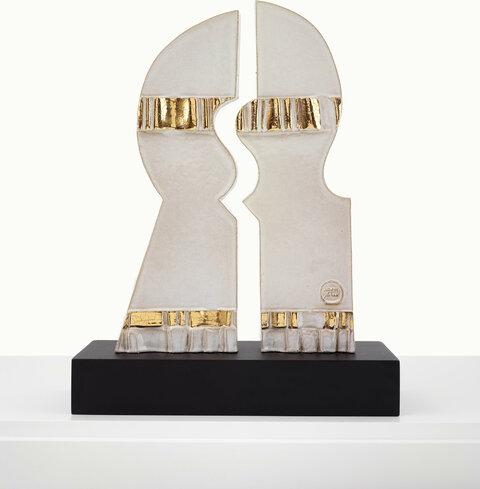 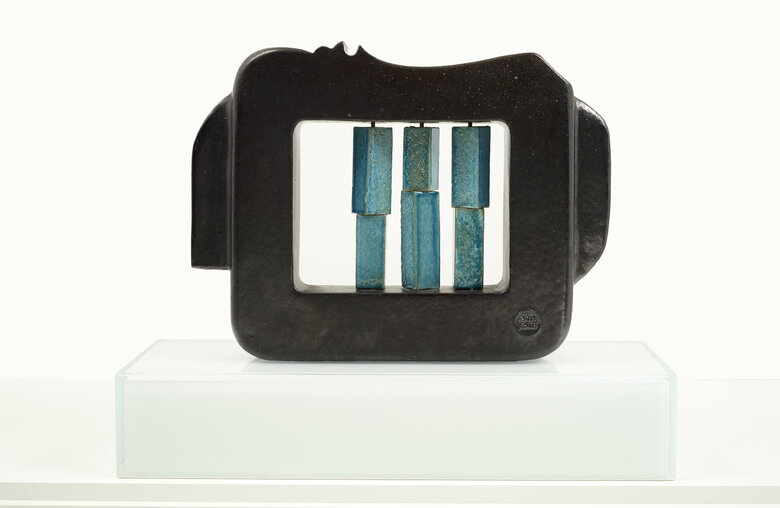 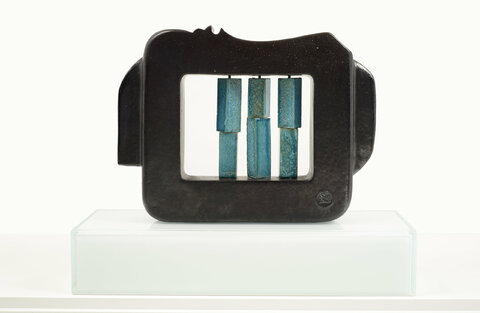 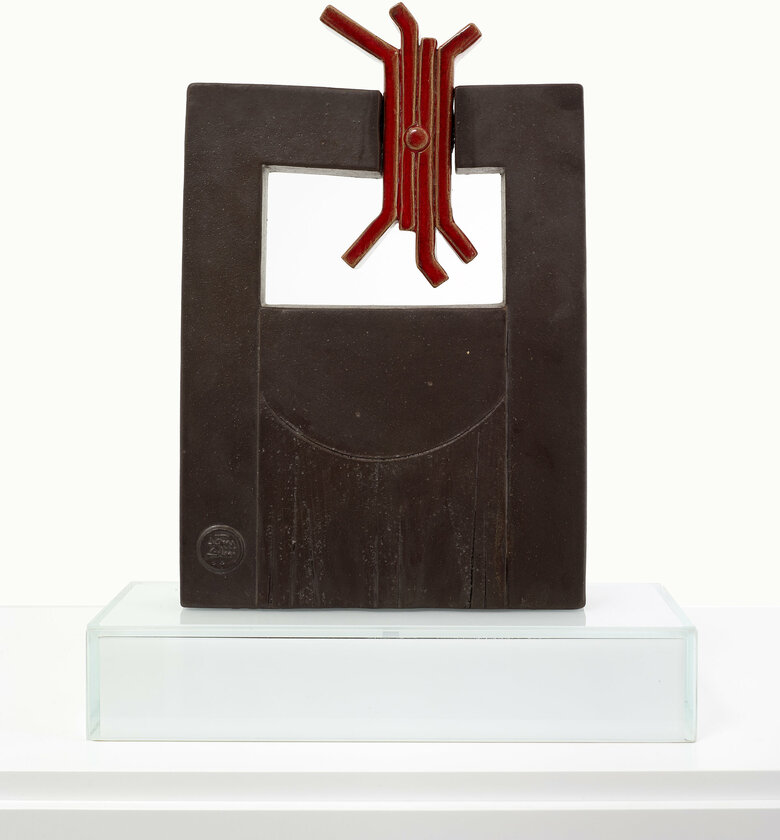 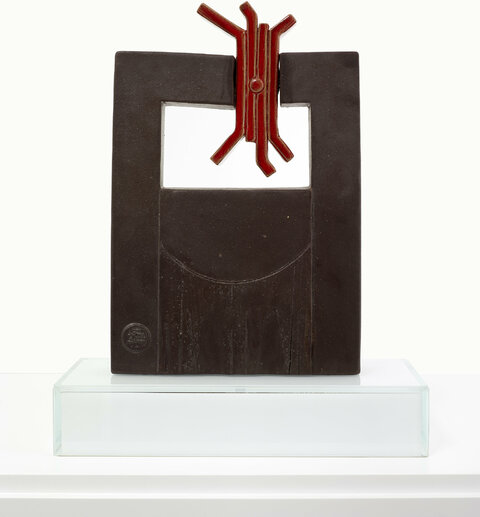