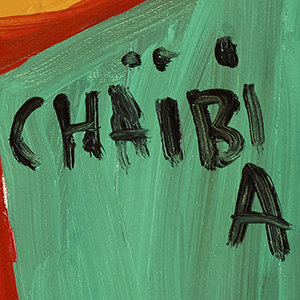 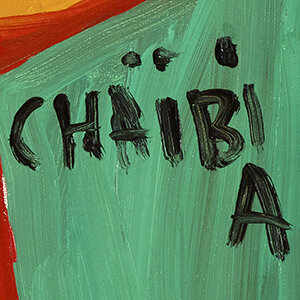 Born in 1929 in the small Moroccan village of Chtouka, a rural area in the El Jadida province, Chaïbia Talal came from humble beginnings, persevered through a life of great struggle and later became one of Morocco’s most celebrated artists. Talal grew up in an agricultural family, spending her early childhood with a tent as her family home, surrounded by fields full of flowers.[1] The nature inspired the young child, often skipping her chores to play outdoors, with villagers naming her “mahbula” (the crazy girl) for her unpredictable, playful and dreamy character.[2]

At the age of 13, Talal was forcibly married to a 70 year-old man.[3] Within two years of marriage, she gave birth to their son, Hussein, and became a widow after her elderly husband died in an accident. At the tender age of 15, Talal had to support her son both at home and financially. She spun wool and took jobs as a housekeeper for French households, vowing to give her child the best start in life and for him to be able to focus on his education, especially as she was illiterate and had never been schooled.[4] For the next ten years, Talal worked as a maid and also rejected several marriage proposals, preferring to protect her son from new stepfathers and also allowing her to live freely.[5] At the age of 25, Talal had an inspiring vision: she dreamt that several men walked into her bedroom and handed her pens, brushes and leaves to draw on.[6] Two days later, despite being completely unskilled in art, she bought paint and some brushes and began painting.

By the mid-1960s, Talal’s son Hussein, who was studying abroad, returned to Morocco, coming back home as an artist himself. One evening, Hussein invited two guests to dinner with him and his mother – Ahmed Cherkaoui, a Moroccan artist, and Pierre Gaudibert, then the director of Paris’ Musée d’Art Moderne, and a prominent art critic. After taking one look at Talal’s canvases, the two men were won over, and strongly encouraged her to exhibit her work.[7] At first, Talal’s vibrant, expressive work did not receive the greatest of praise locally. She was dismissed as a ‘naïve’ artist, as many female artists had been labelled, including Baya Mahieddine. Talal rejected these comments, recognizing that they had often been directed towards self-taught artists who had not had the same opportunities as others, especially as non-European women.[8]

Gaudibert’s support enabled Talal to do her first exhibition at the Goethe-Institute in Casablanca in 1966. This exhibition caught the attention of the international art world, and that same year she had two further exhibitions in Paris. The Moroccan art scene during the 1960s was predominately male and considered somewhat elitist, and despite her growing success, many male artists rejected Talal’s work and thought it contributed to the undeveloped image of Morocco.[9] From 1966 to 1988, Talal exhibited across the world, including in Denmark, Spain, The Netherlands and Germany, and many loved her bright and expressive drawings.

Talal was connected with nature from a young age, and felt most comfortable painting outdoors. She would paint on large canvases, upon which she would use gouache, india ink and oil paints, using colors straight from the tubes without mixing them. These colors would often be applied on the canvas in sizeable sections, outlined with black, or sometimes as large, thick spontaneous lines.[10] Both of these techniques can be seen clearly in her two works in the Dalloul Collection - L’Amoureuse (1971) and Aïcha (1988) – which are also striking examples of Talal’s inclination towards painting portraits of traditional Moroccan women, often with hints of regional clothing and headpieces (as in L’Amoureuse). Teeming with an almost-childlike imagination, vibrancy and warmth, Talal’s paintings became a window into the Moroccan countryside and the personalities within it, and her focus on the female population earned her a place as a “torchbearer” for Moroccan women.[11] Talal’s unique style – sometimes considered ‘Art Brut’ by many due its lack of savant, historical and cultural influences - gained respect, admiration and notoriety, and she became a fascinating symbol of class mobility in an art world which often prioritized the elite. Talal later went on to become the only Moroccan painter to be listed in the stock market, with art collectors often spending hundreds of thousands of dollars on her work.[12]

Talal passed away in Casablanca in 2004 from a heart attack, dying at the age of 75 and leaving behind a legacy of imagination, creativity and resilience. In tribute to the artist, Moroccan filmmaker Youssef Britel directed a posthumous biography in 2015, entitled Chaïbia, The Peasant of the Arts, hoping that it would provide “a message of hope to all women, through the story of Chaibia, who overcame all obstacles that stood before her to reach glory”.[13]

Looking at the World Around You: Contemporary Works from Qatar Museums, Santander Art Gallery, Madrid, Spain

In Conversation With : Morad Montazami Part 2