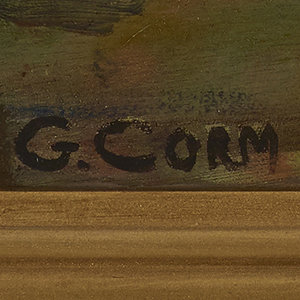 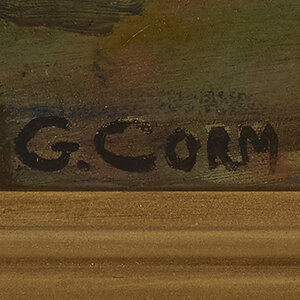 Georges Daoud Corm was born in Beirut in 1896 to a family of scholars from Kesrouan. Georges followed in the footsteps of his father, Daoud, a pioneering Lebanese painter, and was thus a second-generation artist in two ways: firstly, in a literal sense, as an artist’s son, and secondly insofar as he belonged to the second wave of painters in the country. Alongside artists such as Marie Haddad and César Gemayel, Corm built upon the groundwork laid by his father and others who had introduced easel painting to Lebanon on a large scale. Much like the elder Corm, his style was primarily academic but developed its rhythm because of his additional exposure to less conventional art academies such as Julian and Colarossi. A respected writer and cultural activist, Corm distinguished himself from the older generation of painters with a slightly lighter palette and looser brushstrokes.

Like most first- and second-generation Lebanese artists, Corm went to Paris to complete his education. He studied painting at the Ecole Nationale des Beaux-Arts under the mentorship of well-known portraitist Fernand Cormon from 1919 to 1921, returning to Lebanon during a period of drastic social change. As the Ottoman Empire collapsed and gave way to the French Mandate, the traditional aristocracy that had dominated Lebanon’s small art market was foundering. Fewer aristocrats meant fewer portrait commissions, which were the exclusive purview of the upper class, but it also enabled Lebanese artists to start thinking beyond the classicism that was still in vogue among old patrons. A confusing time for the artists: while traditional styles and subjects of art were, to a certain extent, being called into question, abstraction, and other forms of modernism remained highly unpopular and misunderstood. Artists grappled with the demands of the market, the pressures of their formal training, and the appeal of modernism as it swept the global art scene in various manifestations.

The market for portraits of aristocrats and religious figures flourished under Corm’s father, and despite the changing tides of the art world, the younger Corm attempted to keep the “family tradition” alive. Importantly, however, he deviated from the narrow focus on patron portraits, creating images of peasants and working-class people in the spirit of nineteenth-century French social realists like Gustav Courbet. At this stage, the artist positioned himself politically as a humanist whose beliefs were firmly rooted in the Christian faith, and his aesthetic principles cohered around related ideas. Faced with the proliferation of abstraction in modern painting, Corm rejected the disappearance of lifelike human features from the canvas, adhering instead to a realist aesthetic that celebrated the perfection and beauty of the human body and soul. He expressed his fidelity to such stylistic and thematic choices in his writings, such as in his Essay On the art and civilization of this era, 1966, as well as through his visual art.

His determination to reach the spiritual and moral realms through accurate representation appears in his commissioned portrait as in the artist’s self-portraits. The proliferation of the self-representations in the artist’s production can be seen to document the growing awareness of the social status of the artist in Lebanon at this time or maybe a call to establish such social esteem. Moreover, Corm’s nudes were almost direct and calculated contrast to the perfect portraits of upper-class women. Though he never betrayed his commitment to depicting the world around him, the artist did romanticize that world to a certain extent, rendering landscapes in dense, poetic layers of bright colors. Predominantly, Georges Corm worked in oil on canvas and pastel on paper.

As Lebanon moved towards independence, its rapidly changing society did not foster a comfortable environment for traditional portraitists. Much of the élite that had filled his father’s coffers had left the country, and those who remained, preoccupied with politics, gave little regard to art in general, much less the living or financial conditions of its artists. Though he still earned commissions from the upper echelon of Lebanese society, Corm could not support a family with the amount of money he made as an artist. Seeking a more favorable market for his line of work, he moved to Egypt in 1928, exhibiting in the country’s salons and otherwise remaining active in the Egyptian art scene for the next two decades. In the 1950s, however, his financial situation began to deteriorate. The subsequent period of austerity and depression was felt profoundly in his work, which saw the disappearance of the lavish, abundant still-lifes and refined Lebanese and Egyptian landscapes that had previously occupied a prominent place in his oeuvre. Finally returning to Lebanon in 1956, Georges Corm quickly retreated from the public eye, neglecting his social life as well as his career. During his absence, Beirut had become a haven for modern art, and the artist withered under the assessments of critics who deemed him too old-fashioned for the times. Corm’s health declined rapidly in the mid-1960s, and though a 1966 surgery bought him some time, the struggling artist would never fully recover. He last exhibited his work in 1967, and died four years later, in 1971.

Medal of Honor of Lebanese Merit

The Arab Nude: The Artist as Awakener