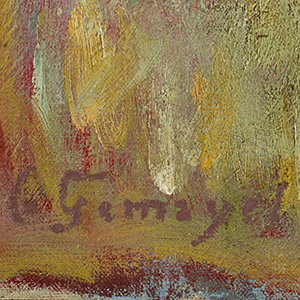 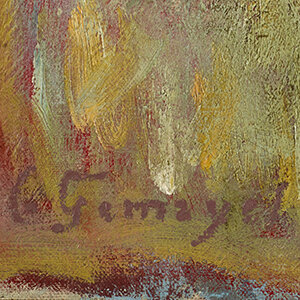 César Gemayel was born in Ain El Touffaha, a small village near Bikfaya, Lebanon, in 1898. In 1924, the artist Khalil Saleeby discovered Gemayel and subsequently took him on as a studio...

César Gemayel was born in Ain El Touffaha, a small village near Bikfaya, Lebanon, in 1898. In 1924, the artist Khalil Saleeby discovered Gemayel and subsequently took him on as a studio apprentice. Gemayel had been a pharmacology student at the American University of Beirut with plans to inherit the family business but instead spent the following three years working under Saleeby, deepening his knowledge of the painting techniques he had begun to develop as a self-taught artist. He left Beirut for Paris in 1927 to study at the Académie Julien, working under Robert Poughéon and Jean-Paul Laurens.

A substantial amount of Gemayel’s work came out of his early training with Saleeby, an American- and European-trained painter widely credited with bringing Impressionism to Lebanon. The influence of Saleeby’s work is apparent in Gemayel’s inclination towards a lighter color palette and loose, expressive brushstrokes. While in Paris, Gemayel immersed himself in the canons of Impressionism, Fauvism, Cubism, and Modernism, studying the techniques of avant-garde painters as well as the history of their movements. The result of his various studies was ultimately a self-directed practice, that resisted easy generic categorization. Drawing and diverging from the influences of his apprenticeship, education, and French contemporaries such as Maurice de Vlaminck, Gemayel created an original body of work for which he was quickly recognized. He won First Prize at Paris’ Exposition Coloniale in 1931, only four years after arriving in the French capital. From its inception, Gemayel’s practice incorporated stylistic influences from both the East and the West, innovatively combining visual elements extracted from his native Lebanon with those he encountered abroad.

Upon his return to Beirut in 1930, Gemayel devoted his life to mastering his craft and soon became a pioneering figure in the second generation of Lebanese artists. Working in watercolor, pastel, pencil, and oil, he became known for his warm, intimate portraits of women, vibrant depictions of objects such as flowers in vases, and pastoral landscapes of the Lebanese countryside. A humanist at his core, Gemayel’s fascination with Lebanese culture and people crystallized during this period, and it didn’t take long for the artist’s homeland to become the principal subject of his work.

Even while demonstrating both technical mastery and an eye for experimentation, Gemayel’s portraits and landscapes are too expressive to adhere to the strict codes of academicism. Yet, their attention to detail alienates them from the category of Impressionism. Indeed, the artist sought to capture his vision without swearing loyalty to a particular school or set of aesthetic principles. His series of vases exemplifies this inventive style, depicting their delicate details with a consistently simple brushstroke.

Known as a bon vivant as well as a keen observer, Gemayel lived his life as a feast for the senses and developed a personal style that reflected his curious, effervescent outlook. However, glamorously depicted, his human subjects often seemed veiled in a thin fog of dissatisfaction or despair. This style can reflect an expression of Gemayel’s distaste for empty materialism; the artist enjoyed the pleasures of a life well-lived but believed that real material joy required a spiritual aspect that was too often lost in the hustle of the modern world. Gemayel described his approach to his profession in his essay, The Painter, which the artist penned in 1943. The essential elements of his craft, he argued in this article, are thought, lines, and colors: “thought that leads humanity to glories, lines that support the edifice of civilizations, and colors which are a revolution and a tempest, a quietude, and reassurance.” It is clear that even in illustrating quotidian matters, Gemayel understood his work to do far more than merely document a given subject. Instead, he knew himself to “[introduce] the gods to humanity and [elevate] humanity to the level of the gods.”

One of the most prominent figures in Lebanese art history, Gemayel left a twofold mark on his homeland’s creative culture. In addition to inaugurating a signature representation of his countrymen, cities, and landscapes, he collaborated with the musician Alexis Boutros in 1937 to find the Académie Libanaise des Beaux-Arts (ALBA), the country’s oldest national institution of higher education and flagship art school. In The Painter, Gemayel urged his country to support artists as a means of unlocking its spiritual elevation, an antidote to otherwise blind allegiance to materiality.

In 1958, Gemayel passed suddenly of a heart attack in Beirut.

Modern Art In The Arab World

A Confusing Profusion of Stories 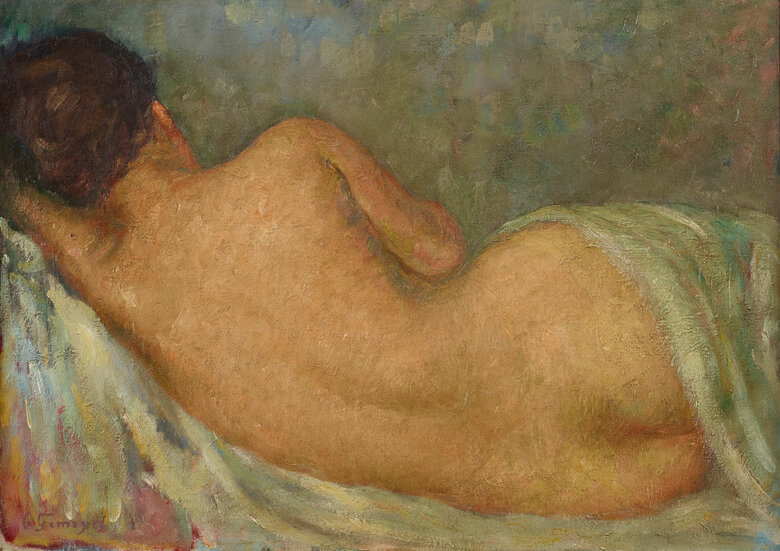 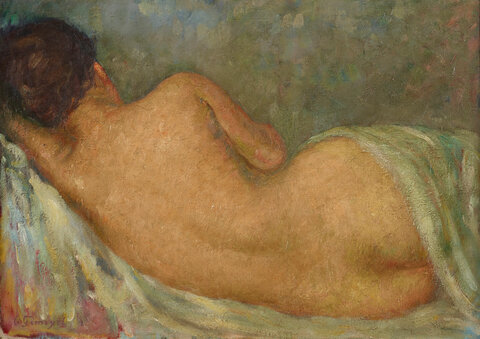 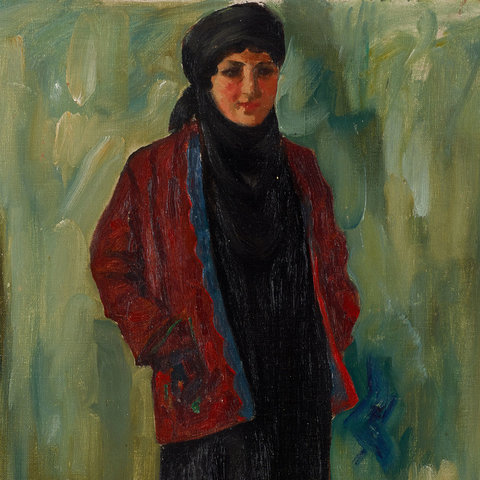 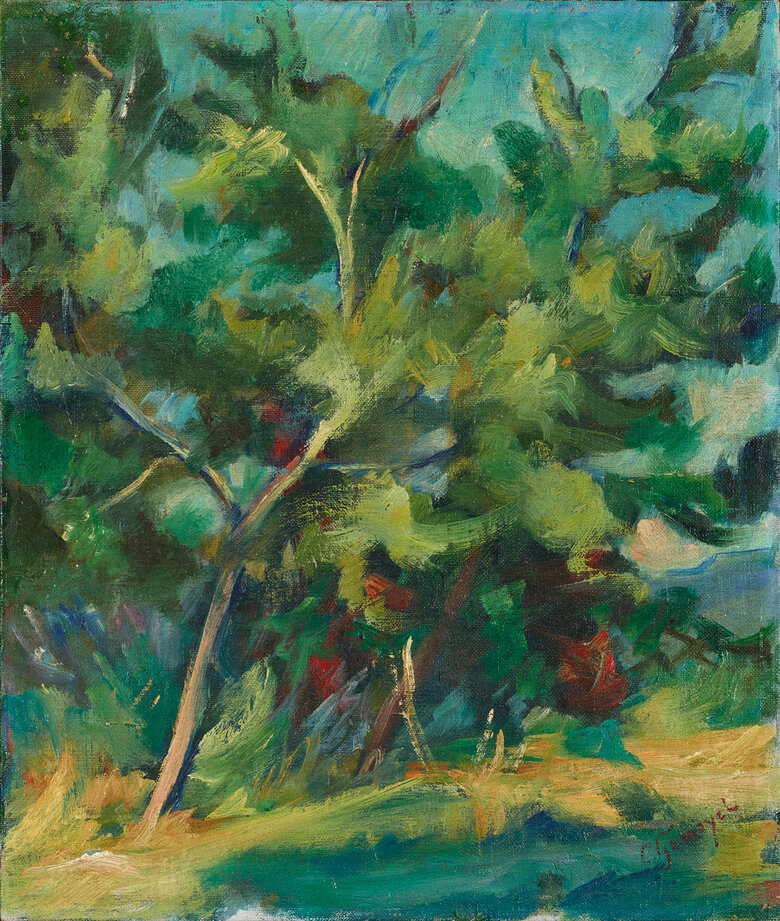 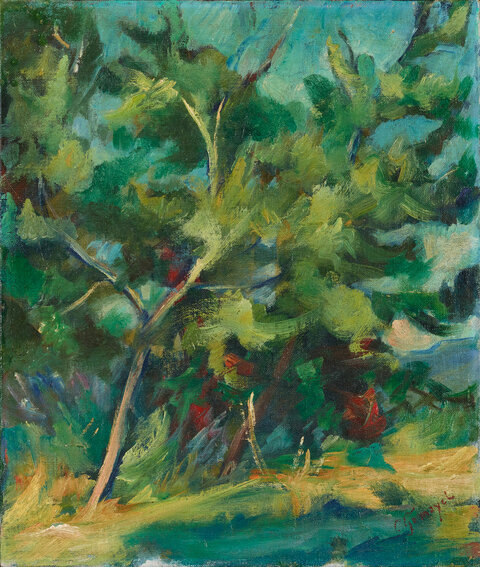 The Emergence of Abstract Art in Lebanon