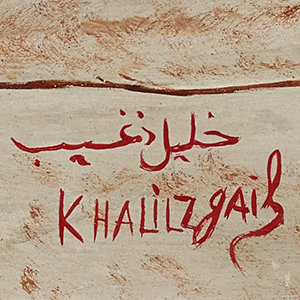 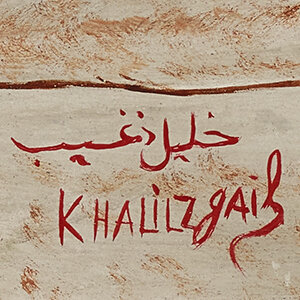 Khalil Zgaib was born in Dbayeh in 1911. A barber by trade, he taught himself to paint in his forties and caught the attention of Henry Seyrig, a French archaeologist, curator, collector, and then-director of the Institut français du Proche-Orient. Seyrig introduced Zgaib to the artist Maryette Charton, who directed the newly established fine arts department at the American University of Beirut (AUB). Unlike that of the Académie Libanaise des Beaux-Arts (ALBA), the fine arts department at AUB encouraged experimentation and divergence from canonical norms. Charmed by Zgaib’s two-dimensional and understated style, Charton encouraged Zgaib to pursue a career as an artist, which she took on the task of promoting.

Zgaib soon became known as Lebanon’s foremost naïve painter, especially in Beirut’s English-speaking circles. Naïve art refers to that made by someone lacking a formal education, generally characterized by formal simplicity and banal subject matter. It is often considered marginal and appears similar to folk art without necessarily stemming from a specific cultural context. Distinct from much of his modernist contemporaries, Zgaib’s depictions of Lebanon are told with palpable humor and playfulness that translate quotidian life into near-fictional and nostalgic worlds of their own. More than mere portrayals, his paintings are personal interpretations of even the most everyday objects and viewpoints—from farmers harvesting wheat in Untitled (1960) to scenes of bucolic leisure in Bedouins Recreation (1950). Zgaib’s work consistently plays host to detailed lines, vibrant colors, and a poetic otherworldliness despite the flattened simplicity of its forms. He created by way of projecting a highly imaginative internal world onto otherwise mundane subject matter.

Zgaib suffered from alcoholism and passed in 1975.

Seeing Sensing: A Sensorial Tour of the Collection