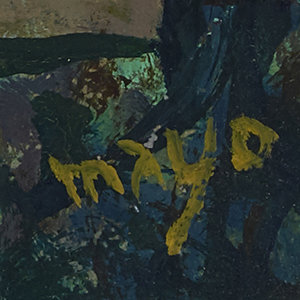 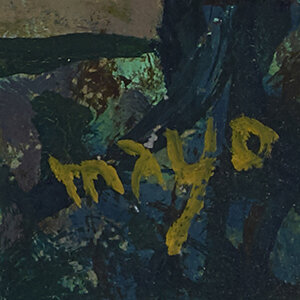 Born in 1905 in Port Said, Egypt, to a Greek father, who was engineer for the Suez Canal and a French mother, Antoine Malliarakis, is better known as Mayo. In 1910, he started his education in Ismailia, North East Egypt, and pursued it in a Jesuit school in Alexandria. Since very young, Mayo showed an interest in art, especially aquarelle, and drawing; which led him in travelling to France in 1923. There, he studied architecture, and painting at the École Supérieure des Beaux-Arts in Paris, before going to Berlin in 1928, where he joined the French writer René Crevel (1900-1935), and started working in the studio of the German expressionist Rudolf Levy (1875-1944). Back to France in 1929, he collaborated to the review called Le Grand Jeu, that was co-founded by his friend, and para-Surrealist poet Roger Gilbert-Lecomte (1907-1943). In 1933, Mayo returned to Egypt, but would eventually go back to France, where he settled in villa Seurat in Paris in 1935. He then decided to relocate in Rome in 1966, but an eye infection pushed him to go back to Paris in 1986.

Going back and forth to Egypt from 1933 to 1934, and again between 1937 and 1941, Mayo contributed to the elaboration of the Art and Liberty group, founded in 1938 in Cairo by the Egyptian poet Georges Henein (1914-1973). The Surrealist group developed in Egypt in opposition to academism promoted by the local art education, and the Westernized Egyptian culture. Although Mayo had never been officially part of the movement, he did exhibit with the group, and also produced some illustrations, which accompanied texts, written by the group’s members, such as the French author of Egyptian origin, Edmond Jabès (1912-1991)[1]. However, it seems that Mayo, as well as his works, were more related to the movement of Surrealism in Paris, since he actually spent most of his lifetime in France.

In parallel of his artist career, Mayo is also known to be costume designer for theater, especially for the Théâtre des Mathurins in Paris. In 1943, the French film director Marcel Carné (1906-1996) started the shooting of Les Enfants du Paradis, and for the first time, Mayo was appointed costume designer for a film.[2]

The experience of Mayo in Paris was highly enriching. He effectively arrived in France within the Roaring Twenties, when the capital city was in turmoil. The latter attracted local, and international, artists, performers, musicians, and writers, who all contributed to the emergence of innovative cultural movements. Among these movements, Surrealism imposed itself as a new, and avant-garde form of expression, in response to the atrocities caused by World War I[3]. Published in 1924 by the French poet, and writer André Breton (1896-1966), The Surrealist Manifesto laid the foundation of the movement, which aimed to free the conscious from the rational life in art, poetry, and literature. Mayo quickly integrated the intellectual, and artistic circles, by frequenting the famous, and lively neighborhood of Montparnasse. He encountered some important figures from the Surrealist movement like the American painter, and photographer Man Ray (1890-1976), the French poet Robert Desnos (1900-1945), and the Romanian writer Tristan Tzara (1896-1963). In his early works in Paris, Mayo used to fiddle with the colors on the canvas[4], and the figures – often human –, that he illustrated in his compositions, look imposing, and massive. He would always be inspired by people from his environment, and sometimes emphasized on the dramatic aspect in some scenes.

It is important to note that the oeuvre of Mayo is hard to precisely define. With his refusal to be part of the Surrealist movement, whether in Cairo, or in Paris, the artist consequently imposed a personal style. Instead of following pure artistic, and theoretical principles, he preferred to combine inspirations, and aesthetics from realism, surrealism, and poetry. Since the beginning, he had constantly expressed a certain mystery, and calmness in his paintings, and put the human in the core of his creative process. Yet, he didn’t really work on the plastic interpretation of the subconscious, and Freudian theories[5].

From the late 1960s to the 1980s, Mayo stayed in Rome, and produced works, that tackle the theme of metamorphosis, in connection with the Latin poem Metamorphoses, written by Ovide (43 B.C.- 18 A.D.) in 8 A.D. In the work entitled Homme de Profil (Profile of a Man), part of the Dalloul Art Foundation’s collection, the use of a palette of warm colors demonstrates the research, and work of the painter on light. He applied a gradation of tones of orange and yellow, seeking for the luminosity through the contrasts. Mayo depicted the face of a man, whom the features recall the ancient Roman sculpture. The artist replaced the hair with entangled fingers, in order to represent the constantly working brain, which all individuals experience in their lives. This shows the complexity of the human thinking, to the extent that the character seems to be suffering, as his mouth might indicate fear, or even scream.

In this ‘Roman’ stage of the artist’s career, the iconography largely includes symbolic elements such as stones, walls, cascades, and animals like horses, and birds. Through a spontaneous painting, Mayo created enigmatic, and erotic scenes, where all these motifs interact with each other, like in a dreamlike world. In La Vie Augmente Toujours (Life Always Evolves), dated from 1970, and also part of the Dalloul Art Foundation’s collection, a naked man seen from behind, is sitting at a wooden table, and is surrounded by trees. The most striking element of this composition is the three giant eggs in front of the protagonist, and whom the shells appear to be as hard as stones. According to Mayo, the nest was seen as a protector of life, and the egg was conceived as the essence of life. Thus, he celebrated the cycle of life, incorporating various elements of animal, vegetal, and human origin.

The artistic specificity, or affiliation of Antoine Malliarakis, was always separated between the places, where he lived, and the different movements, that he discovered. This particularity is the very image of the art from a cosmopolitan world, in which Egyptian, Greek, and French people met. Through all of these cultural exchanges in the 20thcentury, modern art built cultural bridges, and the artists from diverse backgrounds enriched each other.

Antoine Malliarakis passed away in Seine Port, France, in 1990.

Kanafani, Fatenn Mostafa. “The Permanent Revolution: From Cairo to Paris with the Egyptian Surrealists,” 2016. https://www.academia.edu/30032558/The_Permanent_Revolution_From_Cairo_to_Paris_with_the_Egyptian_Surrealists.

The Editors of Encyclopaedia Britannica. “Surrealism,” May 28, 2020. https://www.britannica.com/art/Surrealism.