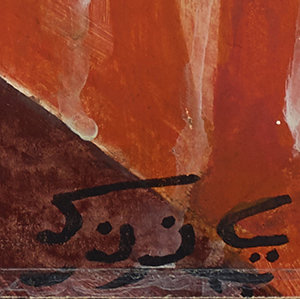 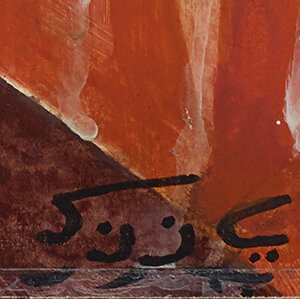 Born in 1924 in Lazib Goundnafi, near the city of Marrakesh, Moulay Ahmed Drissi grew up in a Berber nomadic family. At the age of six, his father put him in a koranic school, where the young Drissi started drawing animals, while learning the Qur’an. During his youth, Moulay Ahmed Drissi worked as a farmer until he was 19 years old, and later was employed as a waiter in a restaurant in Marrakesh. Back then, Drissi was interested in painting, and sculpture, but was not predestined for an artistic career. Yet, one encounter would eventually change his life. In 1945, he met a Swiss couple, Mrs. and Mr. Fuex, who were both painters, and bought some of his works. They also highly encouraged him to become a professional artist. Moulay Ahmed Drissi started travelling to Europe, visiting Italy, Switzerland, and France, where he remained over a long period of time. In 1952, he held his very first solo exhibition in Lausanne, before going back permanently to Morocco in 1956, where he settled in Rabat. Soon after his return, Drissi moved in local artistic circles, and frequented influent painters like Mohamed Ben Allal (1928-1995), and Hassan El Glaoui (1924-2008).

Throughout his career, Moulay Ahmed Drissi never belonged to a specific art movement, or artists’ association. However, his historiography put him in the category of Moroccan artists, who shaped the naive painting movement in the 1940s[1]. At that time, the artistic landscape in Morocco, consisted of two main categories of people making art: European residents, who would produce Orientalist artworks, and local self-taught artists. Amongst the latter, Drissi didn’t receive a formal art education, and didn’t have easy access to art history, and culture.  He became an artist, who simply enjoyed the pleasure of painting, without complying to Western academic conventions, nor modern art theories.

The oeuvre of Moulay Ahmed Drissi is rich, and includes paintings, sculptures, as well as poems, showing his deep need for creation. In his artworks, he would consequently express with great sincerity, what he felt, and enjoyed in the world around him. Drissi once said to the Swiss couple, who visited him: ‘What good is it to paint what everybody can see? I want to paint what I alone can see, to share it with others’[2]. Part of the Dalloul Art Foundation’s collection, two non-dated works demonstrate the attachment of the artist to Moroccan people, and their customs. In Morocco, the processions are part of the daily life, accompanying various events including royal, and religious celebrations. In Procession, Drissi illustrated a festive event with a palette of warm, and pure colors. Using straight lines, the artist horizontally divided his composition: a crowd of men, dressed up with green traditional djellabas, standing in the background, and staring at the star in the foreground. The five branched star resembles the one present in the Moroccan flag, which was introduced in 1915 by Moulay Youssef (1881-1927). However, Moulay Ahmed Drissi reinterpreted it; and the result recalls the handmade Moroccan lanterns with tinted glass.

The early years of Moulay Ahmed Drissi were tough, and were marked by a childhood trauma. When his father took him to the koranic school, Drissi was torn away from his countryside life, and especially from the little grey donkey, that he loved[3]. Hence, he liked to depict vast landscapes in his paintings; and animals like horses, camels, donkeys, had always been recurrent motifs. In Les Cavaliers, Moulay Ahmed Drissi depicted an outdoor scene, where three men are riding horses. Here, the painter didn’t employ a specific perspective, and preferred to superimpose the elements of the composition. He also reduced these elements to geometric forms, that he repeated, such as the triangular shape, seen in the dunes in the foreground, and in the hoods of the horsemen’s djellabas. Drissi applied flat primary colors like blue, red, and yellow, that he combined with their complementary colors, namely green, and orange. Rendering a harmonious painting, the artist celebrated the equestrian tradition in Morocco, which has been unbroken since the 3rd century. The horse played a key role in the medieval Arab-Islamic world, and its domestication served in the military field, and the development of the cavalry. Very precious, the animal enriched the historic, as well as mythological narratives, and was used for political purposes[4]. In another level, integrating the horse in his artworks, was a way for Drissi to convey the idea of journey, and the feeling of escape.

From the first generation of artists in Morocco, Moulay Ahmed Drissi found his style through the cultural richness of the country. Imposing a naive style, with pure colors, and simplified forms, Drissi detached himself from Orientalism, and Western academism, to give his paintings, a local authenticity. Always joyful, the works, that he produced, take a poetic, and fantastic aspect, which reveal the nostalgic memories of his childhood.

Moulay Ahmed Drissi passed away in 1973.

Schiettecatte, Jérémie, and Abbes Zouache. “The Horse in Arabia and the Arabian Horse: Origins, Myths and Realities,” June 30, 2017. https://journals.openedition.org/cy/3280?lang=en.

[4] Schiettecatte, Jérémie, and Abbes Zouache. “The Horse in Arabia and the Arabian Horse: Origins, Myths and Realities,” June 30, 2017. https://journals.openedition.org/cy/3280?lang=en.