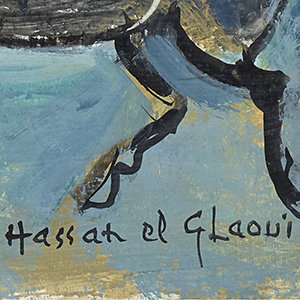 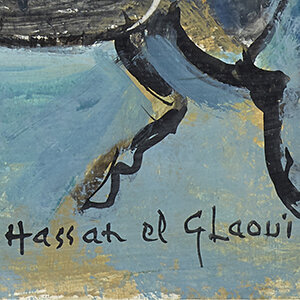 Born in 1923 in Marrakesh, Hassan El Glaoui descended from a prominent family of the oldest Berber tribes of the High Atlas Mountains. His father, Thami El Glaoui (1879-1956), was the Pasha of the city from 1912 to 1956, and his mother, Lalla Zineb al Muqri, was the daughter of Muhammad al Muqri (1851-1957), grand vizier for Moroccan sultans. This powerful family affiliation consequently didn’t predestine the young El Gloui to follow an artistic career. He received a French quality education, enrolling at the Lycée Lyautey in Casablanca in 1938, before moving back to his hometown, where he studied at the Lycée Mangin during World War II. Under the French protectorate, Marrakesh was a cosmopolitan city, attracting people from all around the world, and Thami El Glaoui (1879-1956) used to invite important personalities from the European social elite. The beginnings of the artist’s journey specifically started with some several encounters with these visitors. In 1943, Winston Churchill (1874-1965) was sick, while conducting missions in North Africa, and decided to spend time in Marrakesh to convalesce from pneumonia[1]. He visited Thami El Glaoui (1879-1956), and discovered some sketches drawn by the son of the Pasha. Painting in his spare time, the British Prime Minister was truly captivated by the precocious talent of Hassan El Glaoui, to the extent that he highly advised the father to support his son to study art[2]. Later, El Glaoui would even say that he had always been thankful to Winston Churchill (1874-1965) for this encouragement[3]. In 1950, the American actor Edward Robinson (1893-1973), and his wife Gladys Lloyd (1895-1971), painter and art collector, as well as Anson Conger Goodyear (1877-1964), the first president of the Museum of Modern Art in New York; also visited El Glaoui’s family. All of them were very impressed by the works of Hassan El Glaoui, and they in turn contributed to change the strict position of the father. The same year, the painter traveled to France, where he started studying at the École Nationale Supérieure des Beaux-Arts. He trained in drawing and oil painting under the supervision of the French painter Jean Souverbie (1891-1981), and attended the atelier of Émilie Charmy (1877-1974). A year later, he exhibited some works alongside Gladys Lloyd (1895-1971) in Paris at Galerie André Weil, and at Wildenstein Gallery in New York in 1952. After a lifetime in France, Hassan El Glaoui returned to Morocco, and mainly produced portraits, namely of his second wife, Christine Legendre, and even King Hassan II (1929-1999).

In the late 1940s, Hassan El Glaoui liked to paint people from his surrounding such as the gardener, his sister, and progressively executed landscapes, and still lifes. Despite the fact that he was living in Morocco, he manifested certain knowledge in modern French painting, and technique. In some of these early works, the treatment of the colors somehow reminds the Fauvism movement, and some plein-air paintings demonstrate an impressionist touch[4]. However, one of the typical themes of his oeuvre remains the scenes inherent to the Moroccan equestrian tradition, seen in the two non-dated pieces Chevaux Galopant, and Cavalcade, both part of the Dalloul Art Foundation’s collection. In the Arab-Islamic history,  the horse and its role, had fundamentally been involved in the military field; and the development of the cavalry became a discipline, which needs theoretical, and practical skills in horsemanship, including for instance, the techniques of riding, and veterinary knowledge. Inherited from the 3rd century, this versatile discipline is referred to as the Arabic word, ‘furusiyya’, and has supplied various treaties, scientific, and military[5]. Therefore, the horse was associated to the leaders, who raised it for competitions, or to strengthen diplomatic, and social relationships, by offering it as a gift[6].

Since his father possessed stables, the horse had always belonged to the family environment, in which Hassan El Gloui grew up. He quickly showed a fascination for the animal, and bought his first horse with his pocket money at the age of 9[7].

There is no doubt that Hassan El Glaoui largely got inspiration from his childhood, and some events, which marked his memory: ‘My love of my country has been the defining spirit of my painting. I have recorded our ancestral roots, the flowers in the Valley of the Kasbah and the red Cherifian palaces, the royal courteges with their long lines of white burnouses and the mounted cavalry and their horses’[8]. The harkas – punitive expeditions –, that his father sometimes joined[9], were a recurrent theme, that the painter illustrated, as well as the tbourida, also called ‘fantasia’. The latter is the reconstitution of a military assault of Arab, or Berber horsemen, accompanying some festivities in the Maghreb region. In the artwork entitled Cavalcade, El Glaoui depicted a group of black men, dressed with white Moroccan djellabas, and riding horses to an unknown destination. He employed a palette of warm colors such as orange, yellow, and ochre, which recall the colors of the mountainous landscapes of Morocco. Yet, even though he reproduced images similar to the ones, which he had seen before, the artist preferred to give an emotional aspect to the moments, rather than an Orientalist vision. Detached from a faithful representation of the reality, and using thin brushstrokes, he reduced the silhouette of the men, and the horses, to simple lines, and almost abstracted shapes. El Glaoui perfectly rendered the feeling of motion emanating from the race, by repeating the curving lines, which created a dynamic rhythm to the composition. The painter took liberty in his way to represent the subjects, and turned them into a dreamlike world. Here, the ensemble looks like a parietal painting, and the characters seem to be floating. In the second example Chevaux Galopant, he colored in blue some of the horses, as if this were the product of a child’s imagination.

Although Hassan El Glaoui is famous for this artistic passion for the horse, he tackled a wide range of topics. In the 1980s, he returned to the practice of the portraits, and heard about a circus, which occurred in Muhammad V National Theatre. He waited for the end of the show, to be able to portray a series of the harlequins, and clowns. Throughout his oeuvre, El Glaoui captured instants of his life, tinted of nostalgia, which are also the testimony of the history of modern Morocco, and its rich culture.

Hassan El Glaoui passed away in 2018 in Rabat.

[6] Schiettecatte, Jérémie, and Abbes Zouache. “The Horse in Arabia and the Arabian Horse: Origins, Myths and Realities,” June 30, 2017. https://journals.openedition.org/cy/3280?lang=en.

Schiettecatte, Jérémie, and Abbes Zouache. “The Horse in Arabia and the Arabian Horse: Origins, Myths and Realities,” June 30, 2017.
https://journals.openedition.org/cy/3280?lang=en.