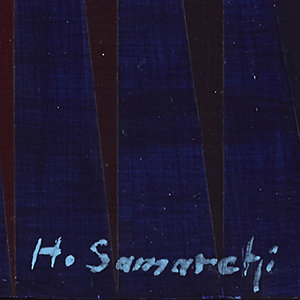 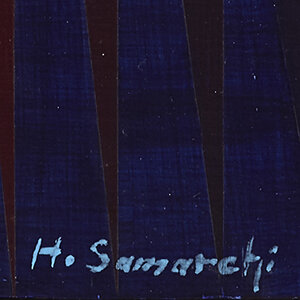 Born in Mosul in 1939, Hashim Samarchi was to become one of the most prominent optical and graphic artists of his generation in Iraq. Leaving the northern Iraqi city for the capital, Baghdad, Samarchi enrolled into the Institute of Fine Arts, graduating in the late 1950s, after which he became a teacher in local schools for several years. Wanting to learn more and develop his work further, Samarchi left his teaching post, joined the Academy of Fine Arts, and graduated in 1966, immediately going into another teaching role in Saudi Arabia for one year after his graduation.[1]

The mid-1960s were a pivotal time for Samarchi and his career. Showing serious promise and a unique graphic, abstract style unlike many other Iraqi artists or artist groups, Samarchi’s talents were beginning to be noticed. In 1967, he took part in the Carreras Craven “A” exhibition, which was the first time a large show by Arab artists toured Europe. Exhibiting numerous paintings in London, Rome and Paris, amongst many other Arab cities, the exhibition was ground-breaking for the artists involved, and especially for Samarchi, who won first prize as ‘Best Iraqi Painter’, with the chairman of the exhibition awards committee commenting that Samarchi’s work was “one of the best paintings in the exhibition….a pure 20th Century image”.[2] Already feeling that his career and his artistic development was heading in the right direction, Samarchi was then nominated alongside fellow artists Rafa al-Nasiri and Salim al-Dabbagh by the Iraqi Artists Association for a Calouste Gulbenkian Foundation fellowship in Lisbon, Portugal.[3]

“The work I carried out in a first phase consisted merely of impressions, fantasies and compositions inspired from nature or imagination. After that, I started studying the dot and the configurations it leaves behind during its path and movement. The dot therefore becomes the line, and the line in its turn becomes the shape, and repetition of shape becomes the subject matter of the artwork and the impact these shapes have on the personal vision; the same goes for colour, its gradation and combination with other colours, since a different combination of colours produces a different impression on the viewer. From this point of view, graphic art is different from hand drawing with a brush.” [4] Hashim Samarchi on his artistic development during his time in Portugal, 2018

The fellowship focused on graphic art, and for two years the artists worked incredibly hard to develop their own personal styles and perfect their technical skills, as well as interact with local artists and exhibit their work. This period had a great impact on Samarchi, pushing him to look at his old work with new eyes and advance his later compositions into new levels of abstraction.

Returning to Iraq in 1969, darkness had come over the region following the 1967 Six Day War, in which the Arabs suffered a crushing defeat by Israel. Although many felt broken, the spirit of Arab nationalism still remained, especially for many artists and intellectuals. Alongside Dia al-Azzawi, Ismail Fattah, Muhammed Muhraddin, Saleh al-Jumaie and Rafa al-Nasiri, Samarchi founded the New Vision Group, hoping to start a revolutionary movement bringing together art and politics and with a focus on graphic art, and especially producing posters. The group’s manifesto, written by Azzawi, stated, “We reject the artist of partitions and boundaries. We advance. We fall. But we will not retreat.”[5] As a result, posters became an important part of artistic production in the late 1960s and 1970s, with poster exhibitions in the National Museum of Modern Art in 1971, the al-Marbad Poetry Festival in Basra, also in 1971, the Al-Wasiti Festival in 1972 and many other exhibitions throughout the 1970s.[6]

Although Samarchi’s posters and occasional illustrations (he illustrated at least two poetry books in the early 1970s)[7] took up much of his time, he still worked hard on his large abstract artworks, and in 1972 created ‘Takween’ (found in the DAF Collection), a visual masterpiece blending geometrical forms, lines, shapes and colours to create a mesmerising, multi-layered optical illusion. Inspired by not only graphic abstraction and optical art, Samarchi was also influenced by the intricacies and calligraphic repetitions found in the Hurifiyya movement and the manuscripts, which inspired it, an impact visible in his linear, delicate artworks and his poster designs.

In the mid-1970s, Samarchi worked within the Ministry of Information, focusing specifically on a new magazine entitled Afaq Arabiya,[8] an important political and cultural publication run by Shafiq al-Kamali, a prominent figure in Iraq who would later write the national anthem. With the political situation changing dramatically in the late 1970s, Samarchi – like many other Iraqis - looked for opportunities abroad. In 1981, he moved to London, and worked in the studio of Dia al-Azzawi for almost a decade. Samarchi then retired and focused on enjoying life with his family, but his legacy as one of Iraq’s most influential and ground-breaking graphic artists remains, with artworks full of effects, illusions and abstractions which have stood the test of time.

Arts Fellowship at the Gulbenkian Foundation, Lisbon, Portugal (until 1969)

Member of the Iraqi Artists Society

A TRIBUTE TO RAFA NASIRI 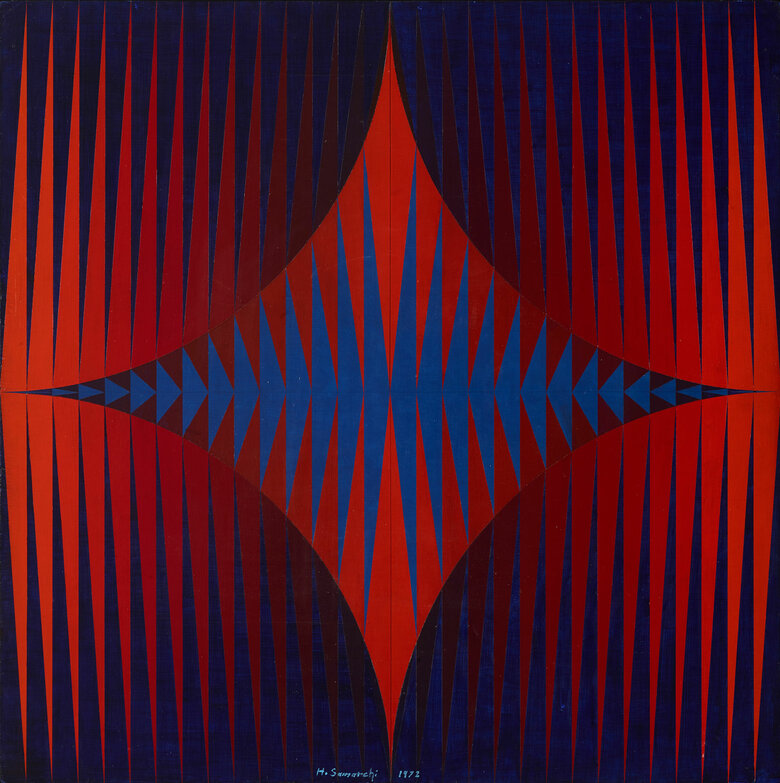 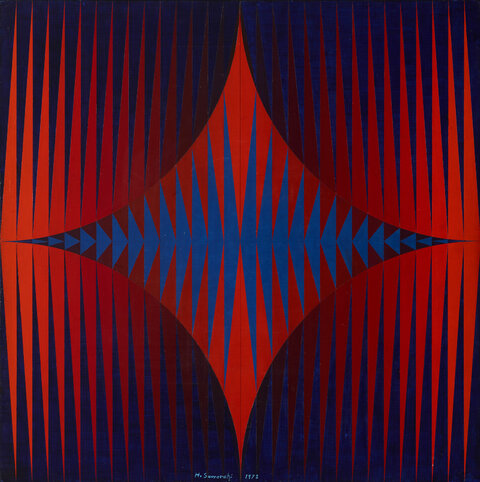