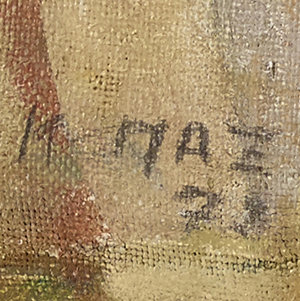 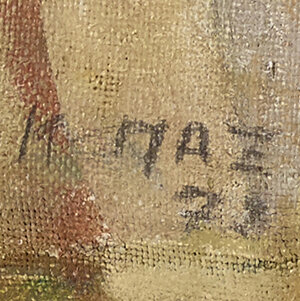 Khaled Almaz was born in Latakia, Syria, in 1938. In 1966, he graduated with a Bachelor's degree in Fine Arts, majoring in painting from the Faculty of Fine Arts in Cairo. Later, he returned to Latakia, where he became the Director of The Figurative Arts Center of the Ministry of Culture for four years. The artist enrolled at the Ecole Nationale Superieure des Beaux-Arts in Paris in 1970 and earned a Master's and Ph.D. in painting and sculpture in 1974. After spending years in teaching at the faculty of Fine arts at the Damascus University, he was appointed its dean from the year 1982 to 1991.

After his studies in Cairo, Almaz was influenced by popular Egyptian art, ancient Egyptians art as well as his contemporaries. The realistic style he adopted at that time, enhanced by an exaggeration in expressions and colors, is a demonstration of that influence. Later on, during and after his Paris education, the artist was stimulated by the modern Western styles in the art such as cubism, surrealism, abstraction, and other forms that he witnessed.

Almaz mostly portrays figurative women, often nudes using bright and harmonious colors. His representation seeks a loyalty to volume and space, a luminosity in colors; he depicts a sensual reality rather than an accurate representation. His portraits gain in dynamism thanks to his moving lines and thin brushstrokes; they blend in harmony with the colors of the background.

The artist still lives in Damascus, where he works as a Professor at the Faculty of Fine Arts.