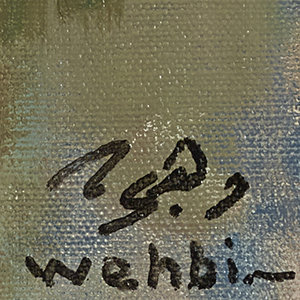 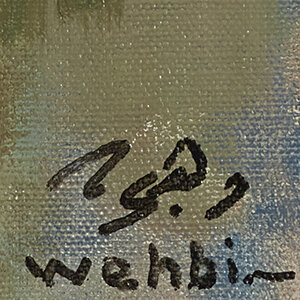 Born in Beirut in 1917, Rashid Wehbi, was amongst the pioneer painters in Lebanese modern art. He was celebrated for his impressionistic portraits and colorful depictions in nature. Wehbi completed his secondary education at Al-Makassed college, in Beirut after which he trained under renowned Lebanese painter Habib Srour from 1932 till 1936. He worked in several local bookstores in Beirut, a space conducive for knowledge. He later worked in a publishing house in Beirut, where he designed movie posters. In 1942 Wehbi studied at the College of Fine Arts in Cairo, Egypt, earning his degree in 1945. He trained under renowned Egyptian artists such as Ahmed Sabri and Yousef Kamel.

An enthusiast in drama and movie making, Wehbi enrolled at the High Institute for Dramatic Arts, Department of Theatrical Critique and Dramatic Arts, in Cairo from 1946 till 1947. In 1957, he co-founded the Lebanese Artists Association for Painters and Sculptors, heading it in 1962. He taught art at the Faculty of Fine Arts at the Lebanese University, Beirut Arab University, and the American University of Beirut, and traveled all over Europe to enrich his knowledge of western art.

In his early years, Wehbi painted male and female nudes, one of whom was the famous female model in Beirut known as Maryam. Women were central in Wehbi's oeuvre of portraitures. Nevertheless, he produced several self-portraits and others featuring prominent political figures such as Bechara El Khoury - the first president of Lebanon. The artist depicted the Lebanese village and the garden-fresh sceneries by the banks of many of Lebanon's rivers. He painted the rocky caves in Ain El Mraisseh along with Beirut's coastal Cornish, where he used to spend time with his father during his school vacations as a young boy.

Rashid Wehbi paid careful attention to the light in his oil on canvas paintings, realized by careful combinations of tints and tones. He applied artificial colors swept in short brush strokes to map facial expressions or to highlight pastoral images. He showed his works in various international exhibitions and galleries held in Beirut, Cairo, Alexandria, Paris, and Moscow. He won many prizes, the most notable of which were the Lebanese National Prize of Painting in 1971 and Saïd Akl's Prize in 1972. Wehbi passed away in 1993.