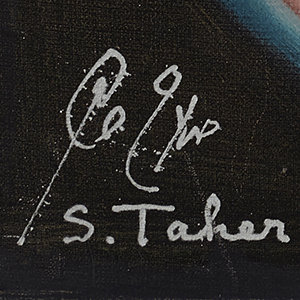 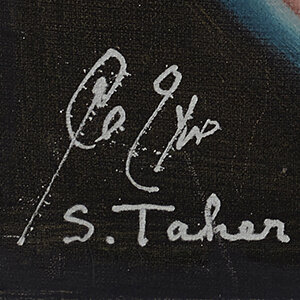 Born in 1911 in Cairo, Salah Taher was an Egyptian painter and educator. His philosophical approach in abstraction left an enduring mark in modern Egyptian art. In 1934, Taher completed his studies at the Academy of Fine Art in Cairo. He later became a Lecturer at the same Academy until 1954. As an arts administrator, he held many positions: he headed the Museum of Modern Arts in 1954  and the Khedival Opera House in 1962, both in Cairo. During the 1960s, he worked at Al-Ahram Egyptian daily newspaper. Besides, he worked as a part-time professor at the Faculty of Fine Arts and the Cinema Institute in Cairo. In the 1980s, Taher was appointed head of the Society of Advocates of Fine Arts in Cairo.

Taher emphasized spirituality in his abstracted art. His depictions of imagined figures and happenings were translated into dynamic shapes and colors. Music and literature were his main inspirations. Taher could interpret a structured piece of music into corresponding patterns of swirling shapes in gestural applications. Arabic calligraphy was central in his work too. However, he was not interested in mastering a particular Calligraphy style. Instead, he followed the motion applied in the construction of Arabic letters. He created a series of abstractions using the word Huwa in Arabic, meaning 'He' which refers to the almighty creator. Taher used a flat brush or a pallet- knife technique to achieve his signature swiping touch while moving the diluted paint on his canvas. In depicting portraiture, he believed that producing a recognizable likeness mattered less than the ability to "go beneath and beyond the face." He portrayed an abstract of his sitter.

An avid reader, Taher left behind a library of forty thousand books ,which covered  a multitude of subjects including literature, music, history of art,  and human psychology. He was particularly close to late Egyptian writer Abbas Mahmoud Al-Akkad and befriended the Egyptian writer Tawfik Al-Hakim. Taher was an athlete and an accomplished yogi. He believed that physical and mental mediation is the route to proper insight.

During years 1959 and 1961, Taher received the State Incentive Award, the Alexandria Biennale Award, and the Guggenheim Award. In 2001, the Bibliotheca Alexandrina published an encyclopaedic volume documenting his life and work, honoring him alongside Nobel laureate Naguib Mahfouz in a fully dedicated program called 'The brush and the pen.' Salah Taher passed away in 2003, in Cairo leaving behind an artistic legacy - his son Ayman Taher.

Salah Taher: The yogi of Zamalek