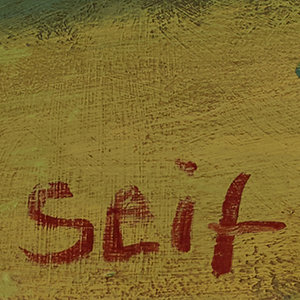 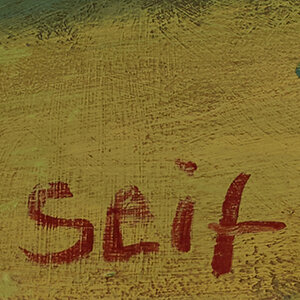 Written by Arthur Debsi Born in 1906 in the district of Moharam Bek in Alexandria to an aristocratic family, of Turkish, and Dagestan origins, the young Seif Wanly was introduced to art early. At...

Born in 1906 in the district of Moharam Bek in Alexandria to an aristocratic family, of Turkish, and Dagestan origins, the young Seif Wanly was introduced to art early. At that time, it was effectively common for children from this social status, to receive an art education, provided by private tutors, mainly foreigners. And because of the high expectations of the family, this was supposedly not conceivable for Wanly to take up an artistic career. However, this didn’t prevent him to attend class in the studio of the Italian painter Ottorino Bichhi (1878-1949) between 1925 to 1929, without telling his parents. Yet, his teacher had to leave Egypt for Italy before the outbreak of the WWII. Again, the passion of Wanly for making art was such that he kept on painting, and imposed in the artistic scene of Alexandria. In 1935, he co-founded with his brother Adham Wanly (1908-1959), and their friends the Egyptian painter Ahmad Fahmi, and the movie maker Mohammed Bayoumi (1894-1963); the Hall for Fine arts in Alexandria. This initiative aimed to encourage the general practice of fines arts, including photography, and acting. Not a fully-fledged artist, Seif Wanly used to work as an employee at the customs archive in the port of Alexandria; and would dedicate the rest of his time to painting. He eventually established an atelier in a building owned by Prince Youssef Kamal (1882-1969), and which progressively turned into a cultural venue, gathering painters, intellectuals, and even British soldiers, who were art-lovers. Through their multiple, and enriching interactions, and conversations, Seif Wanly was able to discover styles, and art movements from Europe, which would have an impact on his oeuvre later on. In summer 1957, he became a teacher in the department of painting at the Faculty of Fine Arts in Alexandria, newly opened by the Egyptian sculptor Ahmad Osman (1907-1970). His involvement in the cultural institutions is also notable, as he worked as a technical advisor for the several cultural palaces of the city, and was president of the National Society of Fine Arts in Alexandria.

Seif Wanly had always been familiar with European culture, because he was raised in a Francophone family, and used to travel to France, as well as Spain, and Italy many times during the 1950s. The painter was captivated by the large, and rich artistic dynamic of the cities, that he visited, and would produce sketches of scenes, that he saw at the opera, theatres, and ballet. In Egypt, the cousin of Wanly directed the Cairo Opera house; which also enable him to attend performances, whose theme is highly present in his oeuvre. In the work called La 3ème Symphonie, Le Héros, dated from the 1950s, and part of the Dalloul Art Foundation’s collection, the painter referred to the famous symphony by the German composer Ludwig van Beethoven (1770-1827). This musical work was composed in 1804 to originally celebrate the French consul Napoleon Bonaparte (1769-1821), known for his heroic military achievement[1]. Here, Seif Wanly fully filled the canvas with a dark palette of colors, that he decided to constantly use after the passing of his brother in 1959. Yet, he employed some little touches of bright colors, like red and yellow, and applied dynamic brushstrokes, that he overlapped with each other. Here, it is interesting to see Wanly’s ability to combine a classical culture, with a modern artistic approach. The abstract plastic treatment was a choice to convey the emotions, the melody, and the musical tonalities of the romantic symphony.

In 1959, Seif and Adham Wanly (1908-1959) were two of the numerous Egyptian artists appointed by the Ministry of Culture, to document the architectural heritage of Nubia. The region was then flooded because of the construction of the Aswan High Dam, initiated, and supervised by the Egyptian president Gamal Abdel Nasser (1918-1970) during the 1960s and 1970s. In the painting Untitled (1950s), also part of the Dalloul Art Foundation’s collection, Seif Wanly depicted a joyful scene, in the arid region of Nubia, which is located between Aswan in southern Egypt, and Khartoum in central Sudan. Reducing the elements to simple lines, and abstracted forms, he illustrated what could appear to be a festive moment, with colored buntings hung overhead. Wanly employed warm colors, and accurately rendered the impressions, that he had when he was in Nubia, from the landscape, the reflection of the light, and people’s traditional cloths, especially the white gallabiyah, worn by the men of the community. He also illustrated a white edifice, which is typical of the Nubian architecture, with a purified style, and mainly made out of bricks, and mud, adapted to the weather conditions in the desert. This work celebrates the millennia Nubian culture, but also displays an illustrated historic testimony: Seif Wanly draw the green flag, on which is drawn the white crescent, and three stars. This flag was the flag of Kingdom of Egypt from 1922 to 1953, before Egypt, and Sudan respectively got independent.

Seif Wanly belongs to this category of Egyptian artists, who were exposed to two different worlds, and cultures. From the cosmopolitan city of Alexandria, and his experiences in Paris, Wanly familiarized himself with classic, and modern artistic trends, whose he adopted an interest in abstract art. Yet, his work in Nubia shows that his interest in his Egyptian cultural identity had always stayed important to his art.

Seif Wanly passed away in 1979 in Stockholm, Sweden.

On the occasion of the anniversary of Adham Wanly, Museum of Fine Arts, Alexandria,     Egypt

On Farouk Wahba's atelier: Chronicle of a mentor and his students 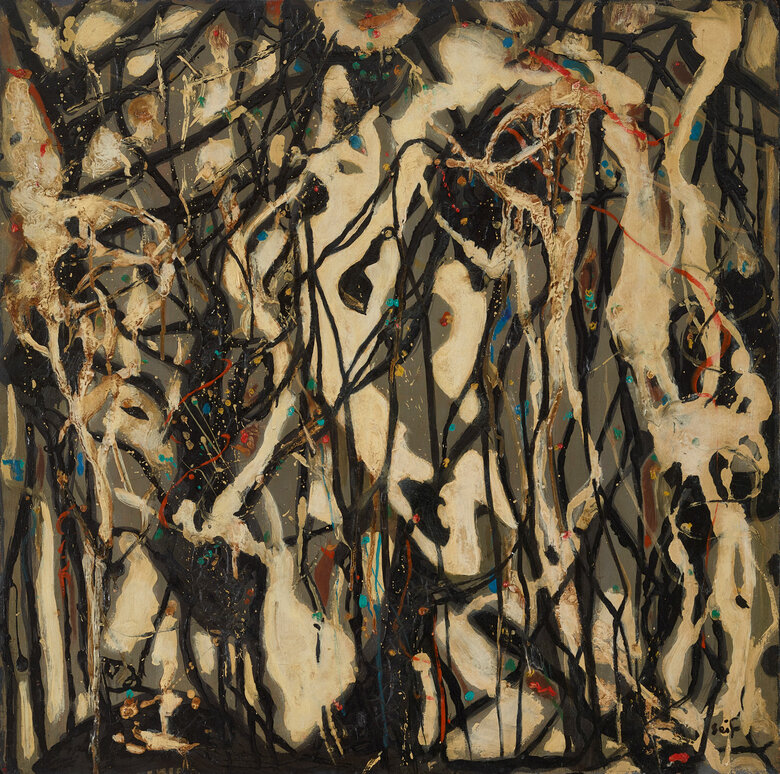 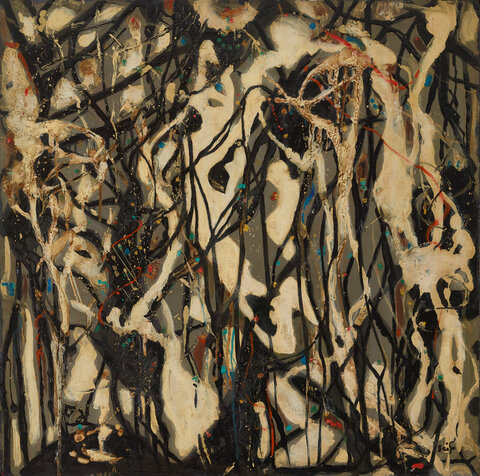 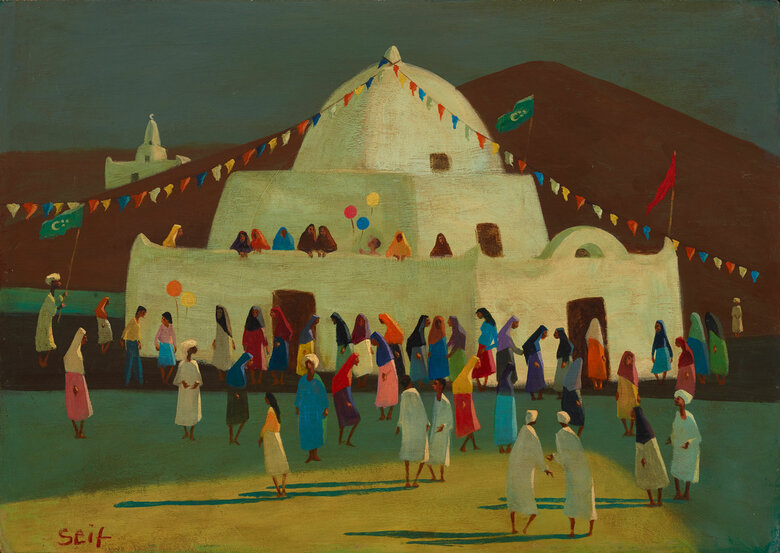 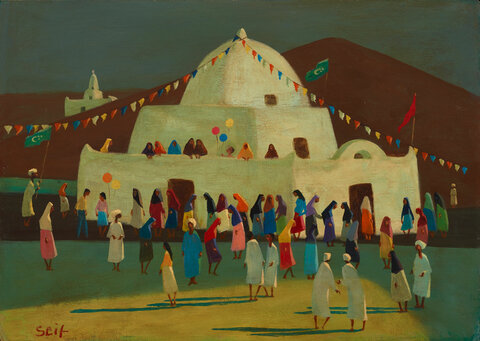