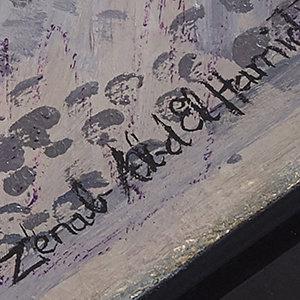 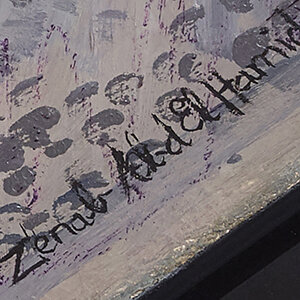 “Abdel Hamidʼs work, as in so many of her paintings, seems to breathe life into landscape, all from the perspective of a birdʼs-eye view. From her perch, we witness modern Egypt in motion — meeting the machines of the 20th century in kaleidoscopic color.”[1]

Born in 1919 in Qalyubia, northern Cairo, Zeinab Abdel Hamid started her life in a city rife with revolution. The Egyptian and Sudanese uprising against the British occupation had just begun, and the country was undergoing a wave of social, political and cultural shifts, which undoubtedly had an impact on a young girl who rejected societal norms, rules of convention and desired artistic freedom.[2] Abdel Hamid went on to become one of Egypt’s most prominent artists, and certainly one of its most renowned female artists, with cityscape paintings full of energy, color, expressive lines and experimental perspectives showing post-revolutionary Egypt during a period in which it was finding its own modern character and re-introducing itself to the world.

After indulging her early artistic interests in classes at the studio of artist Hamed Abdallah,[3] Abdel Hamid enrolled into the Academy of Fine Arts in Alexandria, graduating with a diploma in 1945. The following year, she married Egyptian artist Ezzedin Hamouda, with whom she ventured to Madrid, Spain in 1948.[4] However, before leaving for Spain, she immersed herself in the growing local art scene in Egypt, taking part in art exhibitions organized by the Museum of Modern Art in Cairo, and in Alexandria’s art museums between 1947-1948.[5] In that time, she also began contributing towards the development of art movements across the country, including the Contemporary Art Group, which was founded in 1946.

Having grown up during a period with the world at war, this generation of artists broke with the partisan allegiances of the previous generation, withdrew themselves from ideological debate and focused on creating art that transcended politics and social classes. Influenced by the Egyptian surrealist Art and Liberty group, which allied itself with international artists and movements, the Contemporary Art Group also incorporated surrealist qualities in their work but focused inward, prioritizing “ordinary Egyptian citizens, not the exceptionally wealthy or powerful.”[6] Artists such as Hamed Nada, Gazbia Sirry, Abdel Hadi El-Gazzar and Samir Rafi also formed the core of the group, together creating a wide range of work in search of an identity combining a patriotic flavor with authenticity, originality and creative modernity.

Abdel Hamid and Hamouda’s move to Madrid in 1948 was spurred by the offer to Abdel Hamid of a Professorship in Drawing at the Royal Academy of Fine Arts in San Fernando, and the couple stayed there for several years before returning to Egypt. In that time, she also participated the Egypt-France Art Exhibition in Paris in 1949, represented Egypt in the 25th Florence International Art Biennale in Italy in 1950, and took part in a collective exhibition in Madrid’s Fine Art Club.[7]

The 1950s were a time of national and regional revolution, with Gamal Abdel Nasser’s Egypt shifting the discourse in art, cinema, music and politics. The state was suddenly interested in supporting local artists, preferring to reject the cultural output from the West in the spirit of Arab nationalism. With this came the Alexandria Biennale in 1955 and funding for other events and initiatives across the country. Abdel Hamid’s growth as an artist was rising considerably, both locally and globally, and she was nominated for the 1956 Guggenheim International Award (where she was one of five Egyptians selected as finalists), and in 1958 was selected to represent Egypt and the United Arab Republic at the Venice Biennale.[8] Her work became clearly recognizable, and her depictions of Cairo’s urban landscapes reflected modern Egypt in a unique manner on an international stage. Her 1963 oil painting Chantier Occupé, in the Dalloul Collection, is a brilliantly vibrant example of her distinctive style and perspective. In a scene awash with vertical lines and structural intensity, she manages to alleviate the harsh impact of the lines and strong angles with the warmth and radiance of her colors, adding calm, muted tones to fill the spaces around the animated, bustling scene. The apparent “flatness” of the landscapes is a regular feature in her paintings, employing a birds-eye view and skewing the proportionality to create an unusual and intriguing perspective.[9] Abdel Hamid often painted street scenes and coffee shops, but especially loved to portray coastal scenes, ports and ship-building yards, as depicted here, focusing on the boats, the fishermen, sailors and laborers, in a vivid painterly tribute to the everyday Egyptian spectacle and the everyday Egyptian citizen in her own unique form of dynamic social realism.

In 1969, despite the global demand for her own work, Abdel Hamid became an art professor at Helwan University’s Faculty of Art Education, teaching modern art to the next generation of artists.[10] In the 1970s, she and Hamouda (who also taught at Helwan University) travelled to Washington D.C. for an extended sabbatical, exhibiting their work at both the International Monetary Fund and the Academy of Sciences. Citing a desire for a new challenge and the need to establish cultural bridges for future Egyptian artists, the couple spent their time painting, studying and moving in diplomatic circles, often creating portraits of high-level figures.[11] From their apartment overlooking Rock Creek Park, where they lived with their young daughter, Abdel Hamid painted cityscapes of their temporary American home.

Abdel Hamid participated in a wide range of exhibitions and events throughout the 1970s and 1980s, both in Egypt and internationally, including the First Fine Art Syndicate Exhibition inaugurated by Egypt’s First Lady in 1979, and the General Exhibition inaugurated by President Hosni Mubarak at the new Egyptian Opera House in 1985, and was also honored at the 50th Anniversary of the Faculty of Art Education in the early 1990s.[12] One of her final solo exhibitions in Cairo took place in 1991, in memory of her husband who passed away in 1990. She continued to paint, and in 1992 executed a large-scale mural for the al-Ahram Newspaper building in Cairo. However, in 2002, Abdel Hamid passed away in Egypt, leaving behind her life’s work of striking, animated canvases immortalizing Egypt in a time of flux and the inhabitants that brought it to life.

Forces of Change: Artists of the Arab World, The National Museum of Women in the Arts, Washington D.C., United States of America

Released for Publication in Newspapers of Tuesday, November 13J 1956

A Century of Egyptian Art

Forces of Change : Artists of the Arab world

The National Museum of Women in the Arts/ DAF Library, English, 1994

In Photos: The Treasures of the 4th Pyramid mural exhibition at Al-Ahram 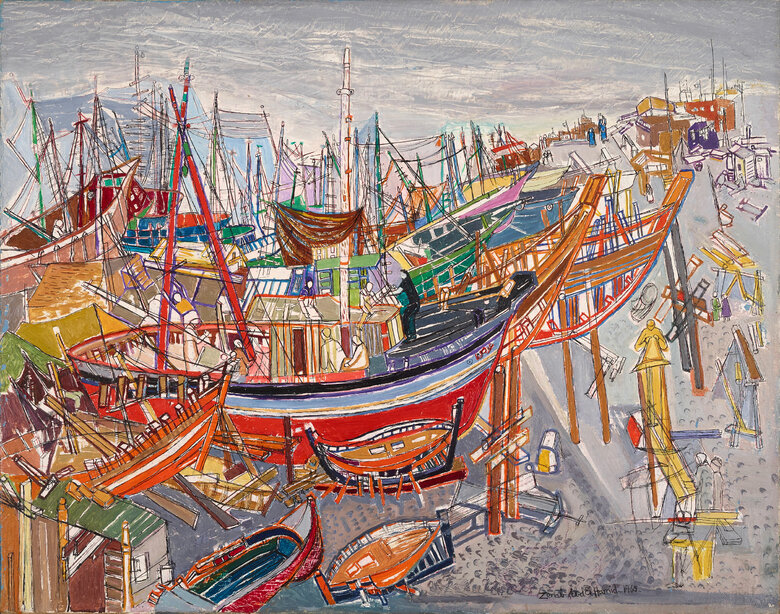 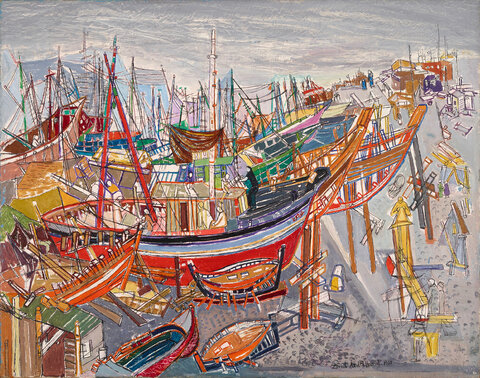