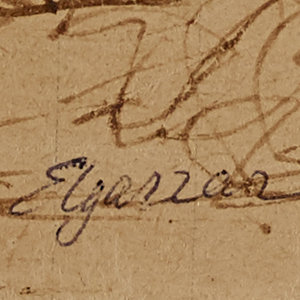 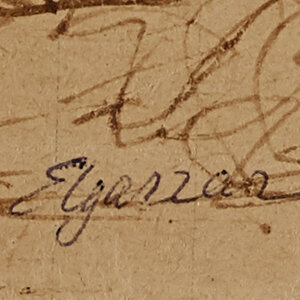 Born in the Qabari district of Alexandria in 1925, Abdel Hadi El-Gazzar moved with his family to Cairo in 1936 when his father was named a professor of Islamic law at Al-Azhar University. As a pupil at the secondary school of El Hilmiya, he demonstrated a precocious ability to draw imaginatively and intuitively, guided by emotions as much as by logic. As a young man, he initially studied medicine at Cairo University but changed course in 1945 when his teacher Hussein Youssef Amin (1904-1984) took note of his talents and encouraged him to join the Faculty of Fine Arts. Though he had quickly abandoned his study of medicine, he remained interested in the sciences for the rest of his life, attending classes in chemistry and physics parallel to his artistic training. A decade later, he left for Florence to learn Italian, later returning to Rome on a scholarship where he completed his education at the Istituto Centrale del Restauro (Central Restoration Institute) in 1961. Upon his graduation, El-Gazzar became the first Egyptian artist to have graduated from the institute. During his time in Italy, El-Gazzar had the opportunity to travel throughout Europe, allowing him to deepen his knowledge of Western art and culture during many visits to museums and monuments. Unfortunately, the artist did not live long after returning from his studies, passing away from a heart attack in Cairo in 1966. Despite the tragic brevity of his life, Abdel Hadi El-Gazzar left a prolific oeuvre in his wake.

Alongside Hussein Youssef Amin (1904-1984), Samir Rafi (1928-2004), Mahmoud Khalil (1929-1955), and Hamed Nada (1924-1990), Abdel Hadi El-Gazzar founded the Contemporary Art Group (Jama’at al-Fann al-Mu’asir) in 1946, a significant step in the development of modern Egyptian art. Influenced by the Art and Liberty group, a Surrealist collective founded in the late 1930s, Jama’at al-Fann al-Mu’asir refused the hegemony of academic styles and the superficiality of commercial trends, aiming instead to raise public consciousness through art. “The human being’s perception is in constant development,” states an early group manifesto; “as a result, humans have begun to become aware of new values, which they then aspire to attain and master.[1]” Though in sync with Art and Liberty’s emphasis on the psychological, the approach of El-Gazzar’s collective was less universalist than its predecessor, taking the specificities of Egyptian life as its primary subject. For his part, El-Gazzar focused on imbuing his images with an intellectual and psychological dimension, seeking to approach the unknown or uncertain through the visual and material.

In the Egyptian capital, El-Gazzar and his family resided in the Sayeda Zeinab neighborhood, a once-prosperous area that had largely fallen into disrepair by the 1940s. Parts of Sayeda Zeinab were (and remain) densely populated by people living in brutal conditions of poverty, which El-Gazzar refused to ignore in his work. In keeping with his belief in art as a means of exploring Egyptian realities, the artist reflected the squalor of his environment in pieces such as The Popular Chorus (1948), an oil painting that has since become one of his best-known works. Here, the artist depicted a line of Egyptians standing barefoot before empty bowls, their worn clothes, and weary faces attesting to hunger and misery. The painting was understood as a critique of the rampant poverty that ravaged the country under King Farouk I (r. 1936-1952), and thus as a critique of the king’s rule; because of this perceived insult to the monarchy, El-Gazzar was imprisoned for a night when he exhibited the painting in 1949.

During the late 1940s, existentialist themes began to manifest in El-Gazzar’s work, a stylistic and philosophical turn that would color its reception later on. At this time, the artist produced a series called People from the Shell Stage, including an untitled drawing (c.1950) currently in the collection of the Dalloul Art Foundation. Sketched in earth-toned pastels on paper, a group of naked people huddles in what appears to be an underwater cave, surrounded by fish and organic shapes that seem like shells. The central figure by his position in the foreground, and his skin color (a vibrant sepia), contrasts with the sallow, greyish tone of the figures behind him. He sits with his back to the viewer, hiding his face between a hunched shoulder and a raised arm. With only the curve of his bald skull and his ear visible, the man’s head strongly resembles a nautilus shell. The recurring motif of the shell signifies the natural state of man before the advent of the civilized world, a theme underscored by the simple, primitivistic way El-Gazzar has rendered his subjects. Without any clothes on, his figures appear to possess nothing, inhabiting only a basic, naturally-created shelter as the first humans did millennia ago. Their postures convey boredom, pessimism, or even despondency: behind the central figure, a man sits cross-legged, resting his head on his right hand and staring blankly away from another figure who looks to him sadly. His facial features have been smudged subtly downward as if a thin veil shrouds him. The dull color palette adds to the sense of oppression that permeates the scene. The notions of dread, boredom, and alienation seem to categorize even this “authentic” state of exemplifying the resonance of existentialist philosophy in El-Gazzar’s oeuvre, which attracted the attention of Jean-Paul Sartre (1905-1980) during his visit to Cairo in 1967.

While El-Gazzar worked on People from the Shell Stage, superstitions and folk beliefs flourished in response to Egypt’s harsh sociopolitical circumstances. Another interpretation of the shell’s prominence, then, stems from Egyptian folk culture, where shells are used by clairvoyants to read someone’s future. Around the bazaar and the principal mosque of Sayeda Zeinab, the artist observed a vibrant and mysterious environment where, as author Liliane Karnouk describes, fortunes were told, purifications were performed, and malevolent spirits exorcised from their human hosts. In the 1950s, Abdel Hadi El-Gazzar’s artistic practice was deeply impacted by this magical, occult imagery, which inspired him to create a spiritually-oriented visual language. He was captivated by the colorful religious and folk festivals, such as the moulids celebrating holy men or the birth of Prophet Muhammad. El-Gazzar illustrated many of these beautiful festivities, as seen in 1951’s Moulid of the Dervishes (also at DAF). The smoky application of the charcoal gives the composition a dreamy, enigmatic quality, arousing the curiosity of the viewer. A bare-haired woman wearing a facial veil appears in the left corner of the composition, her face bisected by the paper’s edge, and opposite her, a dervish is clad in traditional dress. Between them, a fortune-teller sits below a trellis of vines, behind a dragon-like mythical creature atop which she has placed her crystal ball. A huge dagger hangs above her, its blade engraved with a man-snake hybrid. The rich vocabulary of symbols El-Gazzar employs references the mystical and esoteric aspects of Sufi Islam, practitioners of which include dervishes, who seek spiritual elevation through motion and asceticism. Such figures were known to perform miracles in Sayeda Zeinab during occasions like the festival portrayed by the frieze in the drawing’s background. In this and other works, El-Gazzar does not incorporate Islamic motifs to assert a religious identity but instead depicts spiritism and popular belief as integral facets of modern Egyptian life.

When he became the president of the Arab Republic of Egypt in 1956, Gamal Abdel Nasser (1918-1970) placed the struggle against social injustice at the center of his political platform. Launching reforms in education, women’s rights, agriculture, and economic sectors, his regime sought to build a socially and infrastructurally modern nation. Naturally, this also involved a push for technological and scientific advancement as well as major construction projects such as that of the Aswan Dam in the 1960s. Abdel Hadi El-Gazzar’s career took off during this period when his study mentioned above of sciences provided a strong background for artistic growth; in 1964, for example, he won the Medal of Arts and Sciences and the National Encouragement Prize for the painting The High Dam (1964). El-Gazzar’s success could be correlated to the Nasserist regime’s socialist ideals, for though his art was never explicitly propagandistic, it did reflect the changing priorities of the Egyptian people and their government. While in Italy, the artist became aware of the revolution sweeping his home country and began to tackle the theme of technological progress in a series of works on paper, as seen in The Scientist and the Microscope from 1956. A preoccupation with the mechanical is apparent in this work, which is saturated with ambiguous apparatuses that resemble both types of equipment from a chemistry lab and machines from an industrial factory. Surrounded by these objects, the protagonist concentrates on an object that he is observing under a microscope. El-Gazzar has applied ink in thin, dynamic black lines and vivid, chaotic stippling, giving the image a frenzied complexity even as the spectator observes the calm, reflective poise of the scientist. This play between energy and tranquility is indicative of a common theme in work from this time, where the artist emphasizes the marriage of the spiritual and the scientific in the broader quest for human truth. The progress that enchants the public is not merely one of chemistry or engineering, but also the growth of the artist himself and the social, cultural, and emotional awareness that his work represents.

In the Contemporary Art Group, Abdel Hadi El-Gazzar insisted on the impact of art on people from all walks of life, proposing new aesthetics as vital to citizens of a modern era. For El-Gazzar, art was a means by which to elevate the spirit and was rooted in diverse aspects of popular culture and the socio-political environment. Situated at the juncture of science and spirituality, art, according to El-Gazzar, is an emotional experience that must be freed from the bonds of academicism and rationality to touch the soul of its audience.

In Conversation With : Alex Seggerman Part 2 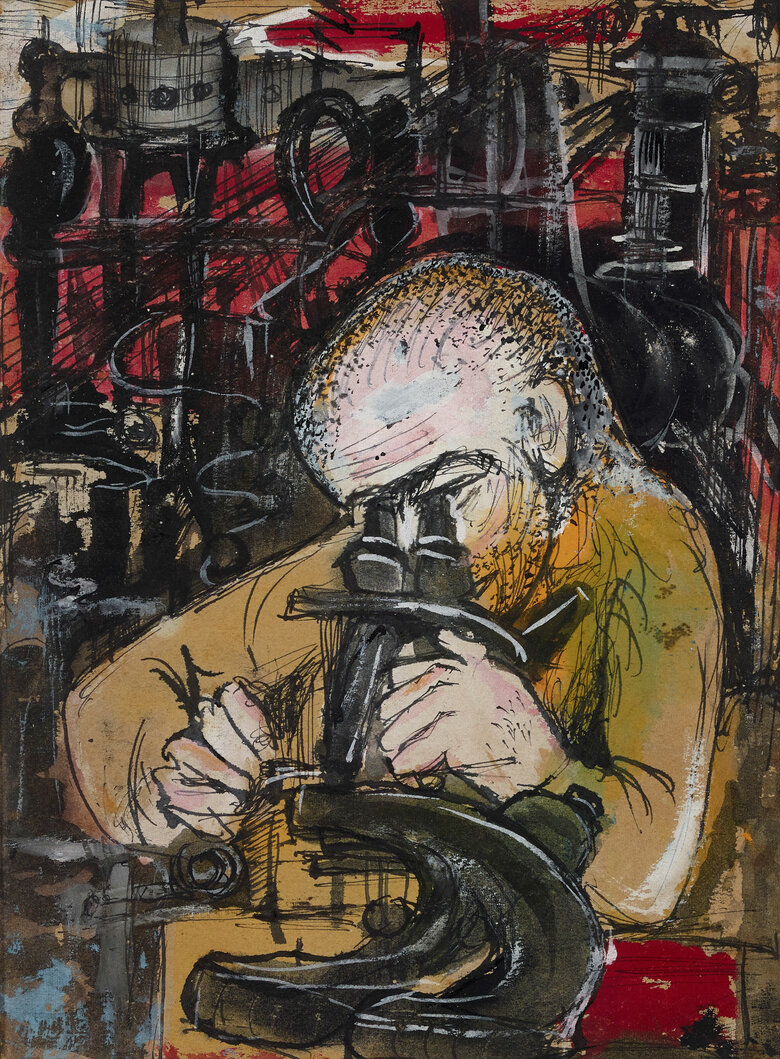 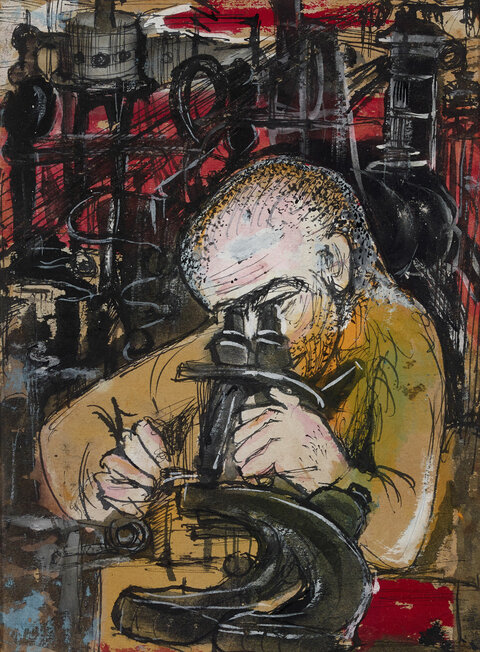 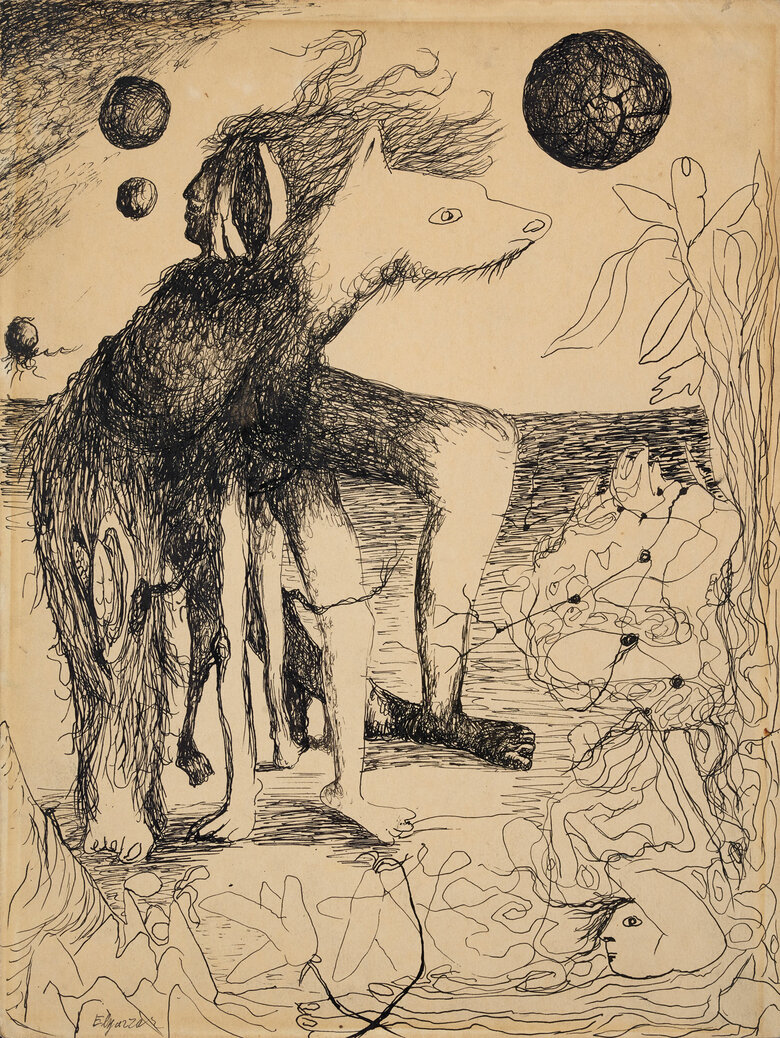 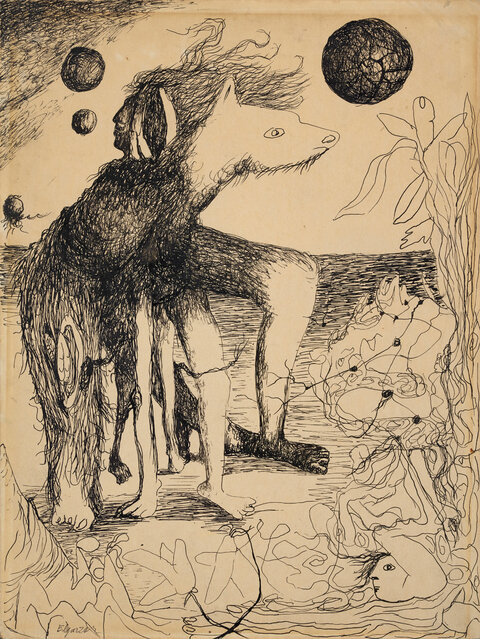 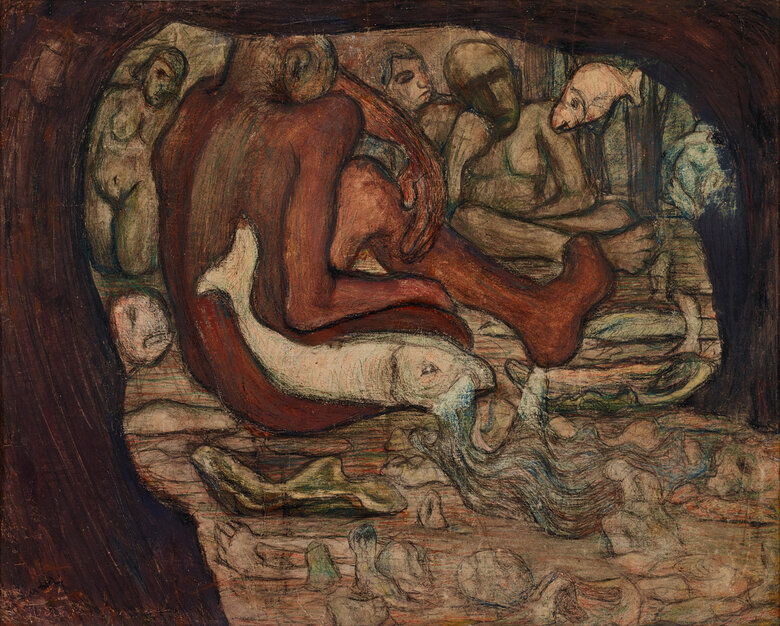 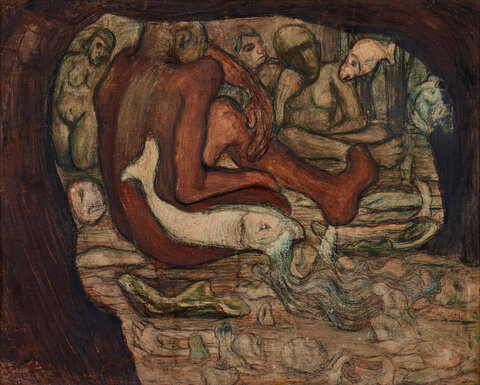 Untitled (from the shells period) 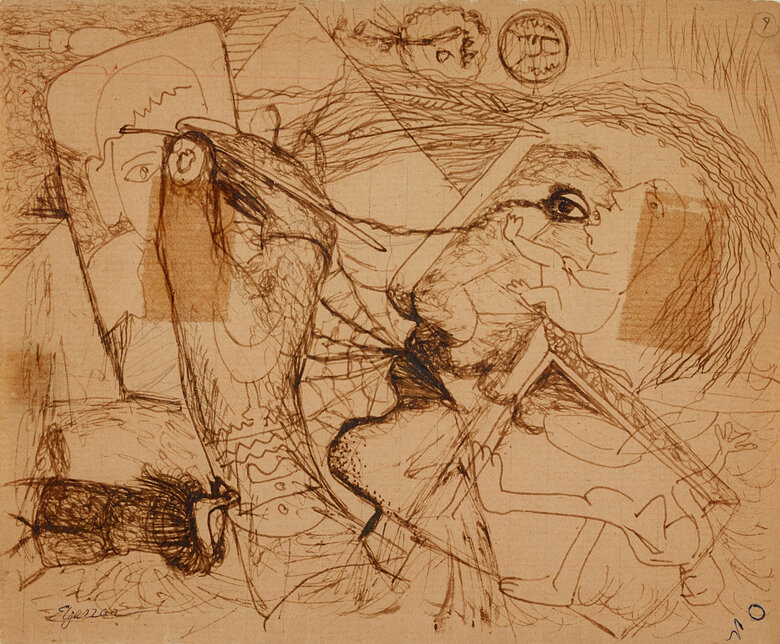 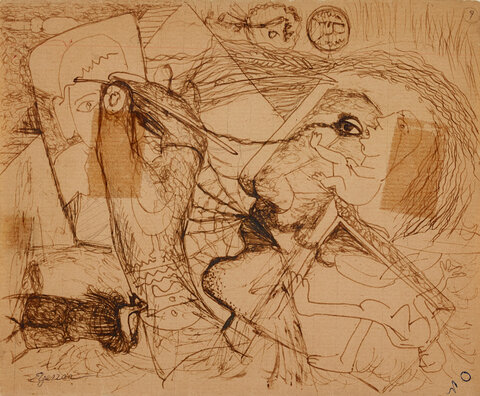 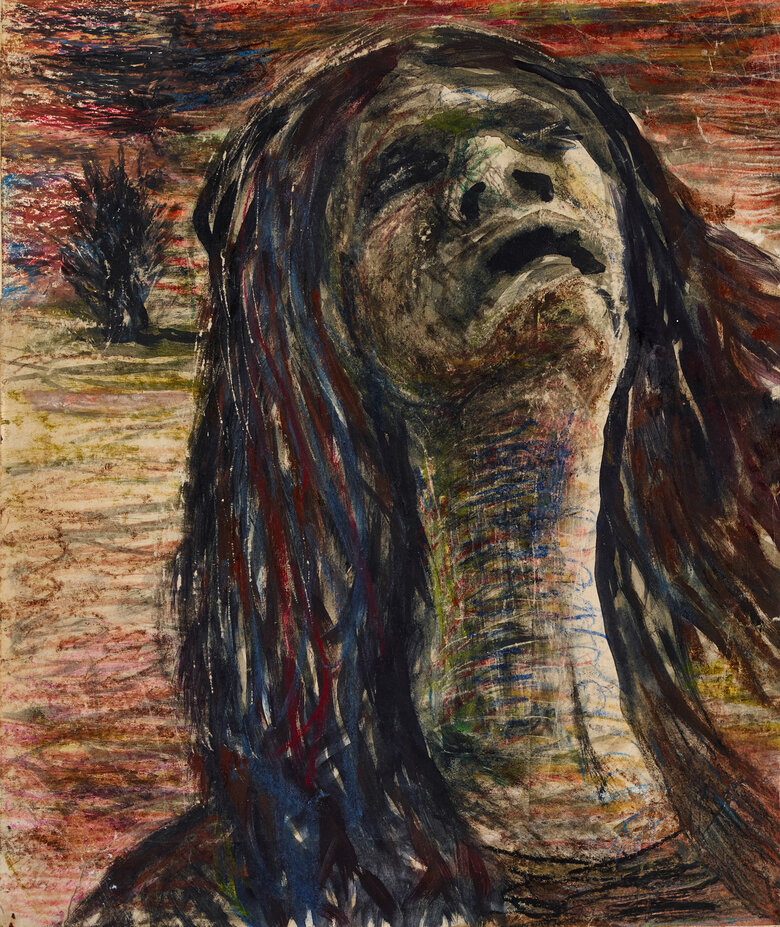 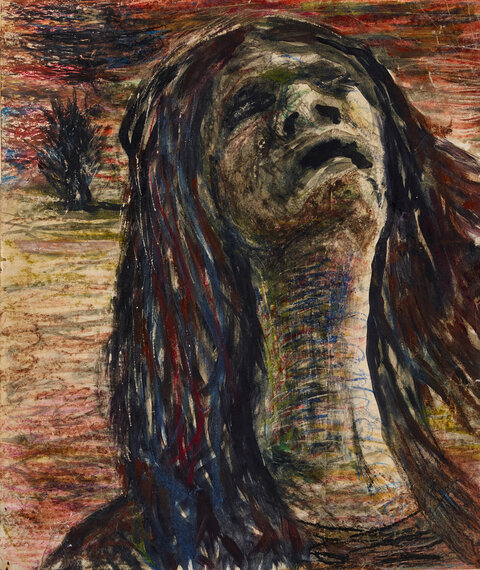 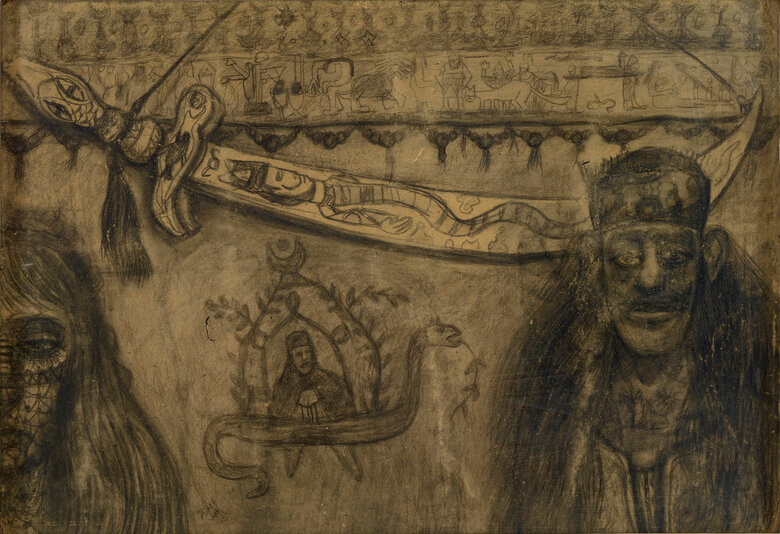 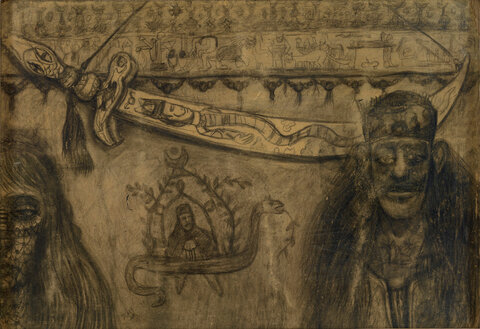