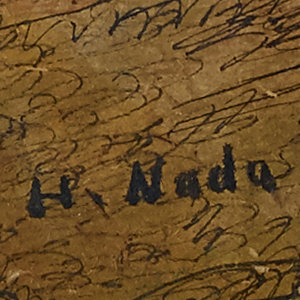 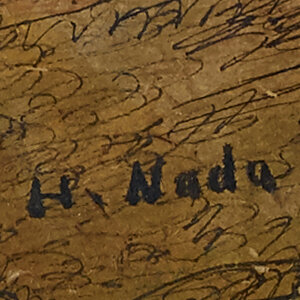 Born in 1924 in the district of Al-Qa’la in Cairo, Hamed Nada grew up in the popular neighborhood of Sayeda Zeinab, known for the same named mosque, dedicated to the Prophet Muhammad’s daughter, Zeinab; and for which, Nada’s father was responsible for the administration. At that time, the influence of the organization called the Muslim Brotherhood (Al-Ikhwan al-Muslimin) widespread in Egypt, providing social services to the poor. Instituted in 1928 by the Egyptian political, and religious Hassan al-Banna (1906-1949), the organization has promoted to this date, the application of the Islamic law in Muslim modern society. Furthermore, Al-Banna established a committee of the Muslim Brotherhood in Sayeda Zeinab neighborhood[1]. Nada consequently lived in this religious environment, but quickly showed an interest in art, philosophy, and psychology, when he enrolled at the Secondary School of Hilmiyya. In the early 1940s, the painter, and art educator Hussein Youssef Amin (1904-1984) taught drawing in this establishment, and noticed the talent of some young pupils to which, he proposed to offer a curriculum. These pupils, including Hamed Nada, Abdel Hadi El-Gazzar (1925-1966), Samir Rafi (1926-2004), and Mahmoud Khalil (1929-1955), used to gather, and trained at their teacher’s villa, located next to the Pyramids. The pedagogical approach of Amin tended to discard the academic art methods, and integrated new techniques based on freedom expression, and self-development[2]. In 1948, Hamed Nada enrolled at the Faculty of Fine Arts in Cairo, and was mentored by the great painters Ahmed Sabry (1889-1955), and Youssef Kamel (1891-1971). While he was student, Nada also worked as a critic, and illustrator for the literary review Al-Thaqafa (The Culture). Graduated in 1951, he started teaching at a primary school, and then completed his studies at the Luxor Atelier in 1956, which was an artists’ residency established by the artist Mohamed Naghi (1888-1965) in the village of Gourna, to promote the ancient Egyptian art. Over one year, he studied the mural paintings, and bas-reliefs seen in the temples of the Valley of Thebes, before coming back to Cairo in 1957. The same year, he went to Alexandria, where he was appointed teacher of painting at the Faculty of Fine Arts, which was newly founded by the sculptor Ahmad Osman (1907-1970). In 1960, Nada traveled on a scholarship to Spain, where he again studied mural painting at the Real Academia de Bellas Artes de San Fernando in Madrid. The following year, he returned to Egypt, and worked as a teacher at the School of Fine Arts in Cairo, and would be appointed head of the department of painting in 1977.

In 1946, Hamed Nada co-founded the Contemporary Art Group (Jama’at al-Fann al-Mu’asir) with Hussein Youssef Amin (1904-1984), Abdel Hadi El-Gazzar (1925-1966), Samir Rafi (1926-2004), and Mahmoud Khalil (1929-1955). Successors of the Art and Liberty group, these artists firstly aimed to detach their productions from academism, especially promoted by the School of Fine Arts in Cairo, and the Westernized Egyptian artistic, and cultural circles; as they announced in their second declaration in 1948: ‘Classical art tended toward the beautification of nature, due to the particular circumstances from which it emerged, whereas contemporary art heads in a more literary, philosophical, scientific direction’[3]. They sought for the relationship between art, and thought. Secondly, the subjects of the representation changed from a European colonial art to a painting reflecting the social realities of Egypt’s population, without conveying a nationalist idea. For the group, it was important to understand the different, and multiple facets of their environment in order to create an authentic Egyptian art.

Hamed Nada experienced the life in Sayeda Zeinab, inhabited by the middle, and working-classes of the Egyptian capital city, like the painter Abdel Hadi El-Gazzar (1925-1966) did. The district also accommodated a population, living in extreme precarious conditions. In his early works, such as Pain (1951), part of the Dalloul Art Foundation’s collection, Nada depicted a dark scene, where a woman sitting on the floor, holds the body of man, dying in her arms. He represented a home interior with very basic furniture, emphasizing the poverty in which, these underprivileged characters live. Yet, the painter functioned on a psychological level in his creative process, as he stated: ‘Growing up made me develop a more inquisitive outlook. I became interested in psychology and read about psychoanalysis, and the artworks of Freud and Adler dealing with disguised pathological behavior. I became aware of the tragic conflict between the inner and outer lives (…)’[4]. He doesn’t only illustrate an anecdotal scene, but conveyed deep emotions like sadness, and empathy, that he shared with the viewer. Besides, the painting becomes symbolic with the use of the oil lamp, and the empty chair, which are recurrent in Nada’s artworks, materializing the human soul.

In the oeuvre of the artist, and more generally the works of artists from the Contemporary Art Group, symbolism is omnipresent. They used a wide range of motifs, which belong to the popular Egyptian visual culture, and recall an idea, or a theory, that the public at large is able understand. Again, the childhood of Hamed Nada in Sayeda Zeinab, was a significant source of inspiration. The area was known to attract fortune-tellers, and where some rituals, and sessions of exorcism were practiced. Additionally, many festivals with magicians, acrobats, and religious celebrations, especially the moulid – commemoration of the Prophet Muhammad’s birth –, were held. This vibrant, and enchanting environment highly nourished the imagery of Nada, as he remembered: ‘My father used to speak to me a lot about insane saints and dervishes. So, like everybody else, I would kiss their hands, seeking their blessings and wanting to satisfy God and the jinn as well’[5].  The iconography of Hamed Nada’s artworks reveals an important part of his attachment to folk culture, magic and mythology. In the painting Little Mermaid (1979), also part of the Dalloul Art Foundation’s collection, he portrayed with a palette of warm colors a mermaid, who stands in the middle of the composition, and surrounded by fish. The myth of the mermaid is commonly inherent to the Western culture, but this half-woman half-fish creature does belong to the Arab-Islamic culture too. As a matter of fact, in the famous, and old collection of tales One Thousand and One Nights (Alf Laylah wa-Laylah), Julnar is a Sea-born creature, who was gifted as a slave girl to King Shahriman[6]. Here, Hamed Nada demonstrated his fascination for tales, that he used to discuss the nature, and enjoy the imaginary world, in which the reader, or the listener are embarked. In a surrealist manner, he progressively integrated in his pieces some elements such as cats, keys, and clocks, which superimpose on top of each other.

Hamed Nada was captivated by the drawings produced by his pupils, during his time as a teacher at a primary school. These drawings looked like mural painting. This marked a shift in his oeuvre as of the 1970s, when he started painting with a strong affiliation to the Ancient Egyptian, and Nubian artistic heritage. The artworks became full of bright colors, and the sad themes turned into dynamic, and joyful scenes. In the work Untitled (1987), part of DAF’s collection, Nada revealed a scene, where some people are dancing to the rhythm of the music, played by two hybrid creatures – half men and half-animal. He gave the composition a rough appearance, and somehow makes it look like a mural painting, through the ochre color of the bodies, and the lack of perspective. The entire work is a clear celebration of the Egyptian culture from the Pharaonic times, in particular, with the orange pyramid in the background, and in the stylization of the motifs, which resemble hieroglyphs. However, their treatment is different from the traditional form in the sense that the artist insisted on their mystic power, rather than their literal meanings.

The formation of the Contemporary Art Group marked a pivotal moment in the history of modern Egyptian art in the 19th, as the Lebanese writer, and art critic Aimé Azar wrote in the book entitled La Peinture moderne en Égypte, from 1961: ‘Egyptian painting began with a miracle around 1946’[7]. The founding members of the movement preferred to choose the term of ‘contemporary’ (mu’asir) instead of using ‘modernity’ (hadatha), because it doesn’t mean a break with the past[8]. Through a personal creation, Hamed Nada succeeded in making his paintings contemporary, by establishing a connection between he, the artist, and his audience.

Untitled, (Dance near the Pyramids)