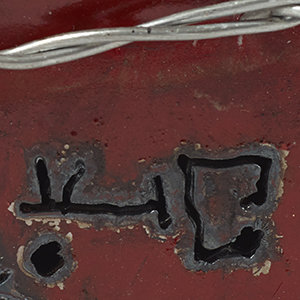 Abdul Rahman Katanani, a Palestinian contemporary visual artist, was born in 1983 in the Sabra refugee camp in Beirut, Lebanon. After the 1948 Nakba, his grandparents fled their hometown on Palestine, Jaffa, and settled in the Shatila refugee camp in Beirut. A third-generation refugee, Abdul Rahman, was raised in the Sabra refugee camp. He acquired his formative education at al-Makassed private school in Beirut, then at a UNRWA[1] run school in the camp. As of age eight, until college, Abdul Rahman worked alongside his father, a carpenter. He received his diploma in Fine Arts from the Lebanese University in Beirut in 2007 and an MFA in 2012 on Palestinian contemporary art. Between 2008 and 2012, he was a supervisor for the creative department at Al-Quds TV in Beirut. In 2012, La Cite des Arts foundation in Paris granted Katanani a three-month artist residency, later followed by a fifteen-month artist residency in 2013 and a three-month artist residency in 2016. Similarly, in 2017, Vent des Forests contemporary art center in Meuse, France, offered Katanani a two-months artist residency.[2]

Katanani was born into a world of poverty and trauma. A year before his birth, in September 1982, and following the Israeli invasion of Lebanon, a Lebanese Christian militia, committed one of the most horrifying massacres against the Palestinians in the Sabra and Shatila camps. In collaboration with the Israeli army, nearly two thousand refugees, mostly women, children, and the elderly, were slaughtered. “Two of my aunts lost their husbands in the massacre,” says Katanani. “They still don't know what happened to the bodies, and a lot of my family’s friends were also killed," he explains. His parents had escaped the camp couple of days earlier. His grandfather, however, refused to leave the only home he had left. [3]

Like many other Palestinian refugees, Katanani’s grandfather held on his “right of return” to Palestine. However, to date, no Palestinian has ever been granted that right. Hundreds of thousands of Palestinian refugees were dispersed across refugee camps in Lebanon. Camps were unliveable spaces: they lacked sustainable infrastructure, health or education services, or any decent employment opportunities. The Lebanese government also denied Palestinian social and economic rights. [4]

Despite these dire conditions, Katanani did not grow up to be bitter or nihilistic. Katanani reached for art and education to express his frustration, but with a positive and forward-looking outlook on life. The agile artist believes in cultural interaction and boundary crossing via art. His body of work, which spans from caricature and street-art to sculpture, and installation, addresses themes such as displacement, borders, trespassing, and freedom. Palestine is omnipresent in Katanani’s work and has come to serve as an allegory for all the displaced in the world.

To keep his hopes, during his teens, Katanani painted colorful graffiti murals in the refugee camp. He tagged whimsical graffiti texts and painted nationalist iconographic figures such as al- fida’i, the freedom fighter, and the dome of the rock. In 2004, to encourage communal art and give life to the camp, Katanani and a group of young refugees painted more than ninety murals on the walls of the Sabra refugee camp.[5] In addition to graffiti, Katanani illustrated numerous caricatures inspired by the Palestinian political caricaturist, Naji El-Ali. Katanani addressed the Palestinian cause in a non-violent form.

From the start, Katanani’s style was unorthodox. It ascribed to liberal ideals that pushed the artist to an even more expressive art form. Between 2008 and 2010, he created a collection of assemblages incorporating zinc metal sheets, kitchen utensils, pre-used garments, and laundry pegs; all materials collected from the camp. At first sight, the materials seem like scraps, but, for him, they represent the survival kit of a refugee: shelter, food, and clothing. At times, to enliven the picture, he would add touches of colorful spray-paint onto the final composition, such as in his picturesque assemblage entitled The Martyred Camp, 2008.[6] It features a mass of vibrant fabrics, a kufiyah, and laundry pegs spread and swirled around a human figure cut out of a corrugated zinc-metal sheet. Although his work resonates with the frameless fabric paintings familiar to the Supports/Surfaces[7]art movement and the ready-made objects found in installations of the Nouveau realism art movement[8], Katanani’s chaotic art is not pegged to any of those movements. Still, Katanani admires the art of abstract expressionist Robert Rauschenberg and nouveau réaliste Armand Fernandez or Arman.

Onto his metal cut-out figures, Katanani often places Pepsi-Cola bottle caps at the intersection of body parts, mainly joints. It is drawn from a childhood experience. As a kid, he helped his father install roofs made of corrugated zinc-metal sheets on top of the concrete cubicles of refugees. In the place of proper metal bolts, which they lacked, they used Pepsi-Cola bottle caps at the points of fixation and pinned a nail in the center of each bottle cap, hoping to keep the roof stable.

One of Katanani’s sources of inspiration is the children of the Sabra refugee camp. In the narrow, humid, and crowded alleyways, children made toys from trash. Katanani played with the kids and took pictures of them. He cut their enlarged pictured figures’ silhouettes out of corrugated zinc metal sheets. Onto these figures, he introduced accessories such as a red ribbon, a red cap, a blue skirt, or a green jumping bag cut out of flattened crude-oil barrels found in junkyards.

For instance, in After Six Days And We Will Be Back Inshallah (God willing), 2011,[9] a poignant artwork made mostly of silver corrugated zinc sheets, Katanani assembles his figures in a wall-mounted installation comprised of four pieces. The installation features a migrating family of six. A young boy follows his mom and dad while each carries a toddler. A grown-up girl in front leads the way. The adults hold on their shoulders and over their heads bags made of hessian cloth and stuffed with supplies and kitchen utensils. Touchingly, on the father's waist, a set of keys dangle – a hint to the right of return. Katanani's refugees are still and faceless. While they bear their uncertain future, they are made of metal sheets.

In his ‘kids and barbed wire’ genre of installation of 2011-2017, Katanani introduces barbed wire into his work and drops the application of paint. He sticks to the original metallic colors of crude oil barrels, such as red, blue, and green. Katanani often applies acid to the polished silver zinc-metal sheets toning down their glossy effect.[10] However, he doesn't mind the shiny surfaces of the once priceless crude oil barrels. In some compositions with kids playing, Katanani positions a wire to look like a jumping rope or a kite’s thread. At times he weaves the barbed wires into a large round disc and displays it as a carpet on which kids lie-down.

In the early stages of Katanani’s career, the materials drove the themes. With time, his themes became more focused, and materials were deliberately chosen. One thing remained constant, though; Katanani never departed from metal. As Katanani expresses, "I am one with metal […] the contrast between soft and hard, malleable and thorny, inspires me, specifically in barbed wire.” Barbed wire was his way of describing the contentious livelihoods of refugees or migrants.

Recently and following the Syrian refugee crisis, Katanani turned to broader issues of migration to Europe by sea. This topic is poignantly expressed in a collection of wave-like sculptures symbolic of the sea. Made out of one substantial curved piece of woven barbed wire, they range from two to eight meters in length. Moreover, Katanani expresses the state of being “stuck in a void without knowing what the future holds,” as he says, in tornado-like sculptures. Tornado, 2015[11] is a staggering ceiling mounted installation handmade of woven barbed wire. The three meters high and two hundred kilograms rotating column stands five cm above the ground and spirals from narrow to wider rims. The massive scale and dynamic rippling and spiral visual effect, in both the wave and the tornado suggest an urge for change or possibly revolt. Besides, both artworks are executed with a  provocative material symbolic of restriction.

Boundaries, physical or otherwise, are a recurrent theme in Katanani’s art practice. Based on a past solo show entitled No Address, exhibited at L’Institut Francais in 2012, in Beirut, Katanani constructed a large-scale structure that mimics the refugee camp, which was displayed at his latest solo show Brain Storm in 2019, at Saleh Barakat Gallery, in Beirut. Katanani created a real-life model of the overcrowded and tight spaces of refugee camps, in which people were barely recognizable. The three meters high immersive installation with doors, windows, and alleyways is made out of colorful flattened crude oil barrels, silver corrugated metal sheets, brass ghee butter gallons, and wooden studs. The viewer’s gaze roams through the claustrophobic narrow pathways of the installation, and mirrors linings on both sides of the main corridor make viewers see their reflection. However, out of what apparently seems like a closed circuit, Katanani draws a way out breaking free from the camp’s borders and tight pathways.[12]

In other politically inspired projects, Katanani takes the facial silhouettes of prominent authoritarian Arab political figures and carves them out of crude oil barrels. The collection includes king Abdel Aziz Al Saud, Muammar Gaddafi, Gamal Abdel Naser, Mohammad Mosaaddagh, and Saddam Hussein, amongst others. Some of those political leaders funded political projects that threatened the rights of Palestinians. This mélange also hints to the centrality of petrodollars and the rentier state in the Middle East.[13]

After receiving a French passport in 2019, Katanani now lives between Paris and Beirut. The refugee boy who lived at, and worked all his life from the Sabra and Shatila refugee camps, “made a dream come true,” as he puts it. He recently moved with his parents and sisters to a new place in Dibieh, a Lebanese village in the Chouf district mountains. He built a new studio there, but his Sabra studio still remains too.

[7], " Supports/Surfaces is a French art Movement (1966-1976). This group of artists […] produced work marked by an interest in materiality, lyrical use of color, and expansive ideas of what constitutes a painting.” They separated the canvas from the wooden stretcher.
The Painting Undone: Supports/Surfaces - Art critical ...artcritical.com/2004/02/01/the-painting-undone-supportssurfaces/.

[8]  “Nouveau Réalism was founded in 1960 by the critic Pierre Restany, artists associated with nouveau réalism made extensive use of collage and assemblage as well as painting.”
Nouveau Réalisme – Art Term | Tate. www.tate.org.uk/art/art-terms/n/nouveau-realisme.

[9] The installation After Six Days And We Will Be Back Inshallah, 2011, is found at DAF Foundation, Beirut, Lebanon.

[11] The installation Tornado, 2015, is found at DAF Foundation, Beirut, Lebanon.

Neslen, Arthur. In Your Eyes a Sandstorm: Ways of Being Palestinian. Berkeley, CA: University of California Press, 2011.

Art is the answer ! 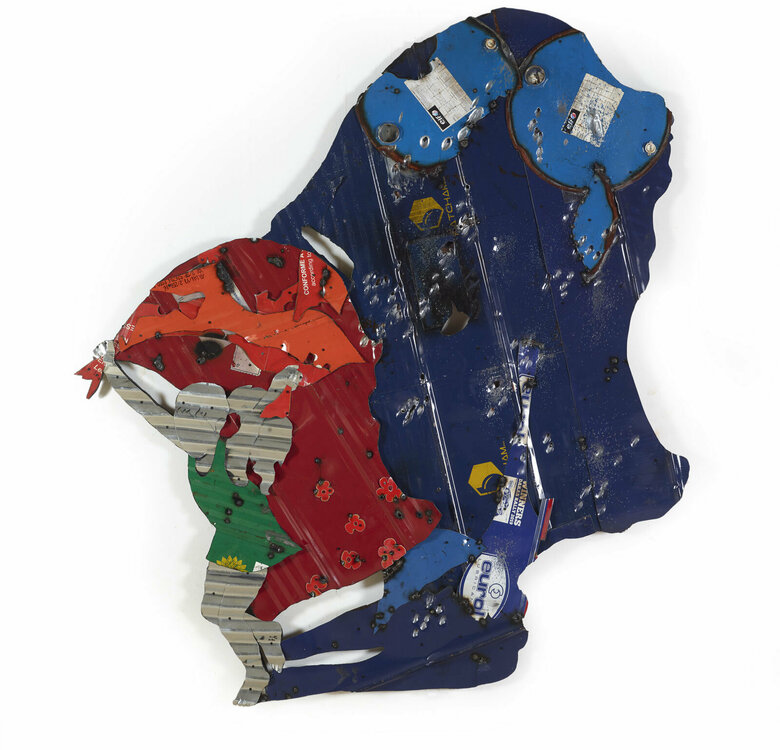 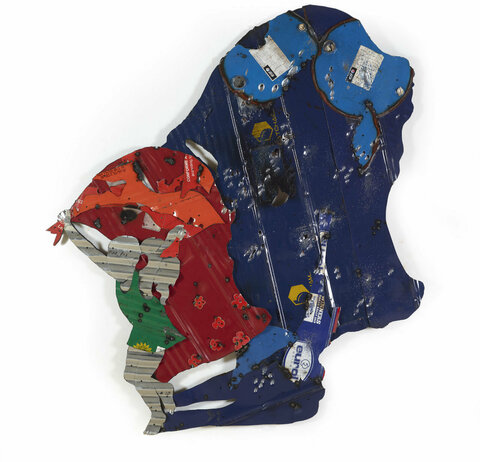 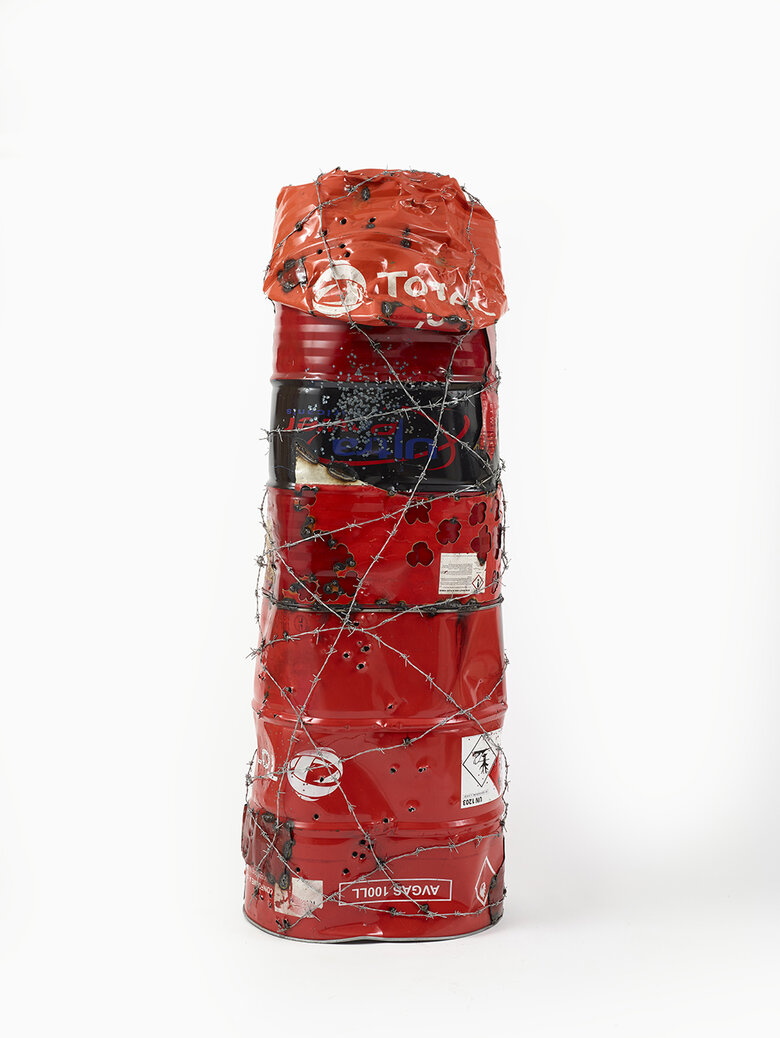 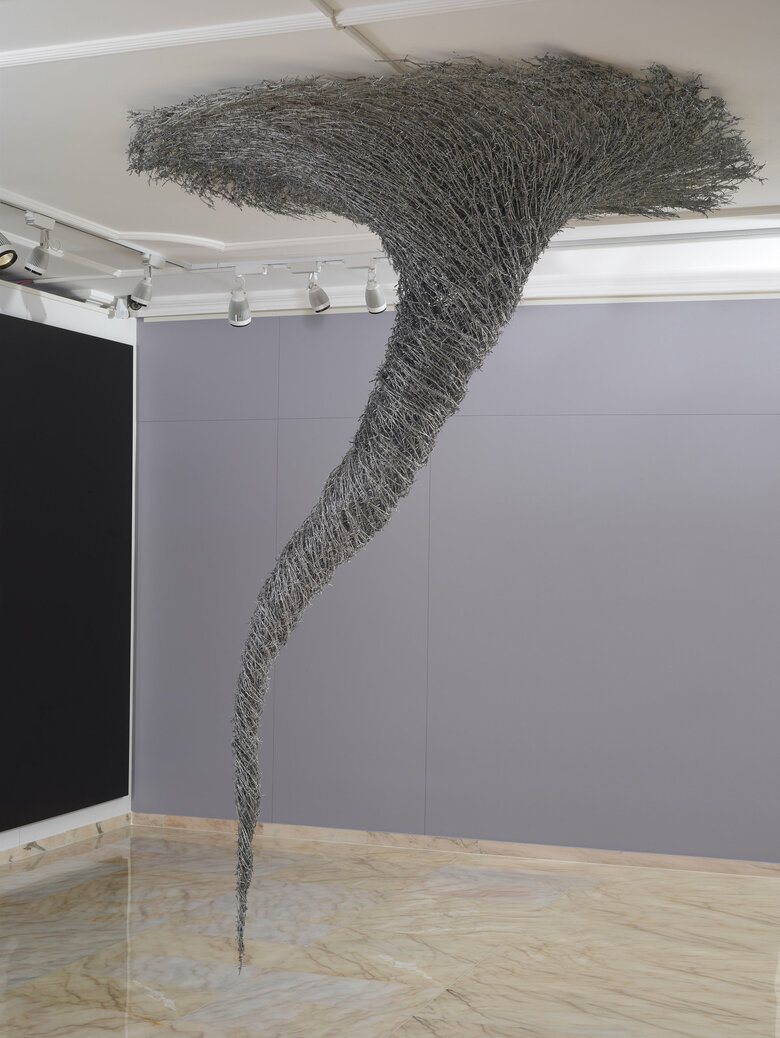 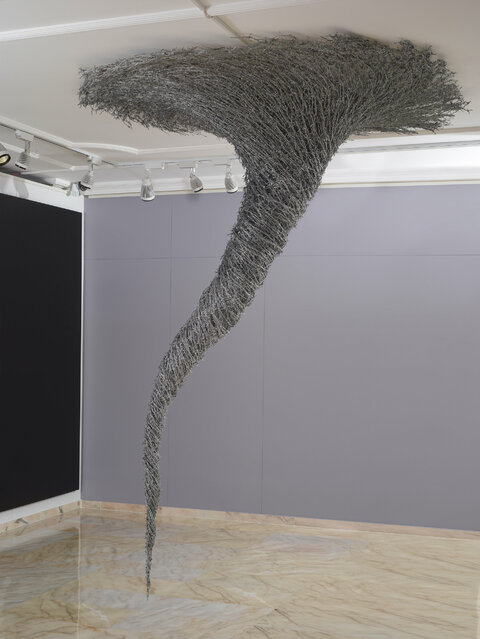 We will return after six days