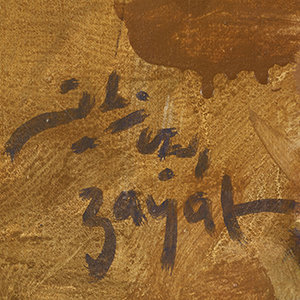 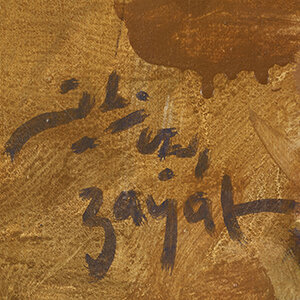 Born in the old city of Damascus, Elias Zayat grew up in the Christian district of Bab Tuma. He was raised in an intellectual family, enjoying the pleasures of reading books, while listening to his...

Born in the old city of Damascus, Elias Zayat grew up in the Christian district of Bab Tuma. He was raised in an intellectual family, enjoying the pleasures of reading books, while listening to his mother playing piano at home. At an early age, Zayat showed his parents an interest in art, and caught the attention of his teachers in school, who noticed his skills to draw from life. When he turned 17 years old, Elias Zayat started training under the supervision of the Syrian painter Michel Kursheh (1900-1973), a prominent figure of the modern art movement in Syria.

When in school, Elias Zayat didn’t really pay attention to the course, and used to imagine a fantastic world, while contemplating the walls, and the roof of the classroom. Even though the teachers would reproach him for doing so, Zayat remembered: ‘These were the first images I would draw. My visual memory contributed to my process’[1].

After Syria received its independence from France in 1946, the artistic momentum accelerated, and the government progressively got more involved in the cultural activities. In 1950, the General-Directorate of Antiquities and Museums was founded, and sponsored the annual Syrian group exhibition of ‘hand painting’[2]. Eight years later, the General-Directorate of Antiquities and Museums became the Ministry of Culture and National Guidance, including a Directorate of Fine Arts, and a Department of Acquisitions and Exhibitions, within its structure. The government also started acquiring works from the National Museum of Damascus. On the other hand, the creation of the Syrian Society of Arts marked this decade, followed by the creations of artists’ associations.

Elias Zayat witnessed this dynamic period, especially when he went with Michel Kursheh (1900-1973) to the opening of the third annual Syrian exhibition in 1952. Yet, since the art was still not included in any higher education program, the government granted some students scholarships to study in Europe, as well as Egypt. Zayat benefited from a scholarship to go to Bulgaria, where he started studying at the National Academy of Art in Sofia in 1956. Under the supervision of the artists Boris Mitov (1891-1963), and Ilya Petrov (1903-1975), he practiced various genres such as portraits, still lives, and landscapes. In parallel, Elias Zayat was affiliated to a group of students, which encouraged the subjectivity in art, taking inspiration from the post-Impressionist artists[3]. Studying in Sofia also enabled Zayat to travel all around European countries, such as France, and Belgium, where he liked to visit galleries, and museums.

In 1960, Syria was part of the United Arab Republic, which was a political union with Egypt. The latter’s administration was responsible for the art education, and Syrian students had to complete their studies in Cairo[4]. Hardly returned from Bulgaria to his home country, Elias Zayat consequently traveled to Egypt, where he enrolled at the Faculty of Fine Arts of the University of Cairo, and trained under Abdul Aziz Darwish (1918-1981). He also received a bachelor degree in Fine Arts from Ain Shams University in Cairo. Back to Syria in 1961, the United Arab Republic dissolved, and Elias Zayat was appointed instructor at the College of Fine Arts at the Damascus University in 1963[5], when the Ba’ath party took power. In 1973, Zayat decided to go back again to Europe, where he studied restoration at the Academy of Fine Arts in Budapest, Hungary, for one year. Throughout his career, Elias Zayat highly dedicated himself to art education, holding many positions at the College of Fine Arts of the Damascus University. From 1962 to 1980, he was successively appointed assistant professor, and associate professor, prior to be full professor of art between 1980 and 2000.

The experience, that Elias Zayat acquired abroad, led him to experiment with different techniques, and find his own artistic style. In Europe, he focused on the work on colors, inspired by the post-Impressionist works of Paul Gauguin (1848-1903), and Henri Matisse (1869-1954). He also trained in the use of paintbrush, and learned how to manipulate pigments, and to analyze materials. However, it was in the Middle East, where Zayat found inspiration, through his several trips in Egypt, and Syria. In Cairo, he visited museum such as the Coptic Museum, and discovered the Ancient Egyptian art, the Fayoum portraits from the late 1st century B.C., as well as Islamic artworks from the Fatimid and Mamluk times. In the 1960s, Zayat travelled all around Syria, and visited its numerous archeological sites, including Horan, and Palmyra. He thus reconnected to the country’s cultural heritage, and conducted research on Ancient Syrian art.  In the Dalloul Art Foundations’s collection, Ma’aloula (1966), is part of a series of paintings, where Elias Zayat depicted the famous Christian village of Ma’aloula, in northeast of Damascus. The city has always been familiar to the artist, since he used to go there on holiday during summer with his family[6]. In the work Ma’loula (1966), he illustrated, through a palette of warm colors, a daily life scene, where a woman is busy with some tasks, surrounded by animals, in the bottom left corner. Here, the technique demonstrates the shift towards abstract art in Zayat’s oeuvre in the 1960s. In 1965, he effectively co-founded with Mahmoud Hammad (1923-1988), and Nasser Chaura (1920-1992), the Damascus Group, also called ‘Group D’. Although the group didn’t last long, the members contributed to elaborate debates on plastic experimentation, especially on abstraction. In Ma’aoula (1966), the painter realized a two-dimensional representation, flattening the foreground, and superimposing the pictorial elements. These latter elements are reduced to simple, abstract forms, partly contoured with thick blue brushstrokes. Cities have always been a recurrent subject in the art of Elias Zayat, as he stated: ‘Most of humanity now lives in the city. They are born and die in the city, and thus the city is part of their being, and they are part of the city’[7].

Depicting the village of Ma’aloula reveals the attachment of Elias Zayat to the religious heritage of Syria. From a Christian family background, the artist conducted extensive research on Syriac iconography, while being in charge of the conservation of frescoes, and icons, present in churches such as Deir Mar Mikhael, in Lebanon, and Deir Mar Takla, in Syria, between 1970 to 2014. Thanks to these commissions, he was able to improve his technique on Christian artistic practice, that he then adapted in his paintings as of the mid-1970s. One of the sources, in which he was particularly interested, was the Syriac manuscripts, as he said: ‘In the 1980s, I saw the Syriac manuscripts at the Deir Mar Musa al-Habashi (the Monastery of Saint Moses the Abyssinian), the Rabbula Gospel Folio (sixth century CE). I immediately recognized the similarities between the figures in these miniatures and the Arab-Islamic miniature’[8]. Dated from 1985, and also part of the Dalloul Art Foundation’s collection, the work The Visit (Liqa’) reveals Elias Zayat’s deep knowledge on Syriac miniature. The artist painted the episode in the Gospel of Saint Luke (1:36), when Mary visited her cousin, Elizabeth, to announce her pregnancy. Zayat followed the iconographic tradition, placing the two characters at the entrance of a house, behind them. Mary is wearing a dark blue coat, while Elizabeth is covered by a red one. Occupying the middle of the composition, the two women embrace each other, and are surrounded by birds, and plants, which indicate the garden. In this artwork, Elias Zayat showed that he joined in the traditional art practice of the Church of the East, related to the use of images, from the beginning of Christianity[9]. However, the artist also integrated the aesthetics of Ancient Syrian art sculptures, that he had contemplated in the temples of Palmyra. As another source of inspiration, Zayat wrote: ‘I discovered the ancient art that pre-dated the Greek and Roman conquest of the region, (…) and then I saw Palmyra’s funerary reliefs from the second and third centuries [CE] and was convinced that the roots of Syrian Christian art also came from this region’[10]. In The Visit (Liqa’), Zayat reworked on this aesthetics, by purposely exaggerating the hands of the characters, and distorting the proportions of their bodies. Through its surrealistic aspect, the scene conveys a mystical dimension, on which Zayat would work through his research on the philosophy of Sufism.

The oeuvre of Elias Zayat reflects the rich artistic heritage, which have persisted for centuries in Syria. Detaching himself from post-Impressionism, Zayat worked on various styles, while delving into the history of his country. Referring to the aesthetics of Ancient Syrian art, Syrian Christian art, Sufism, and works from European masters; the painter found an experimentation terrain by combining them all. In the 20th century, this artistic approach, that Elias Zayat chose, became an important part of the modern art movement in Syria, celebrating its cultural, and religious mosaic.

[2] Lenssen, Anneka. ‘The Shape of the Support: Painting and Politics in Syria's Twentieth Century’. Dissertation, Massachusetts Institute of Technology, 2014. [P.13]

Hammad, Lubna. ‘A History of Art Associations in Damascus During the 20th Century: From Emergence Until the First Arab Conference of Fine Arts in Damascus in 1971.’ Translated by Basel Jbaily. Atassi Foundation. Accessed December 16, 2020. https://www.atassifoundation.com/features/a-history-of-art-associations-in-damascus-during-the-20th-century-from-emergence-until-the-first-arab-conference-of-fine-arts-in-damascus-in-1971.

Lenssen, Anneka. ‘The Shape of the Support: Painting and Politics in Syria's Twentieth Century’. Dissertation, Massachusetts Institute of Technology, 2014.

The Art and Literature Appreciation Award, Ministry of Culture and National Orientation, Syria

And the conversation continues, Syria: A Living History 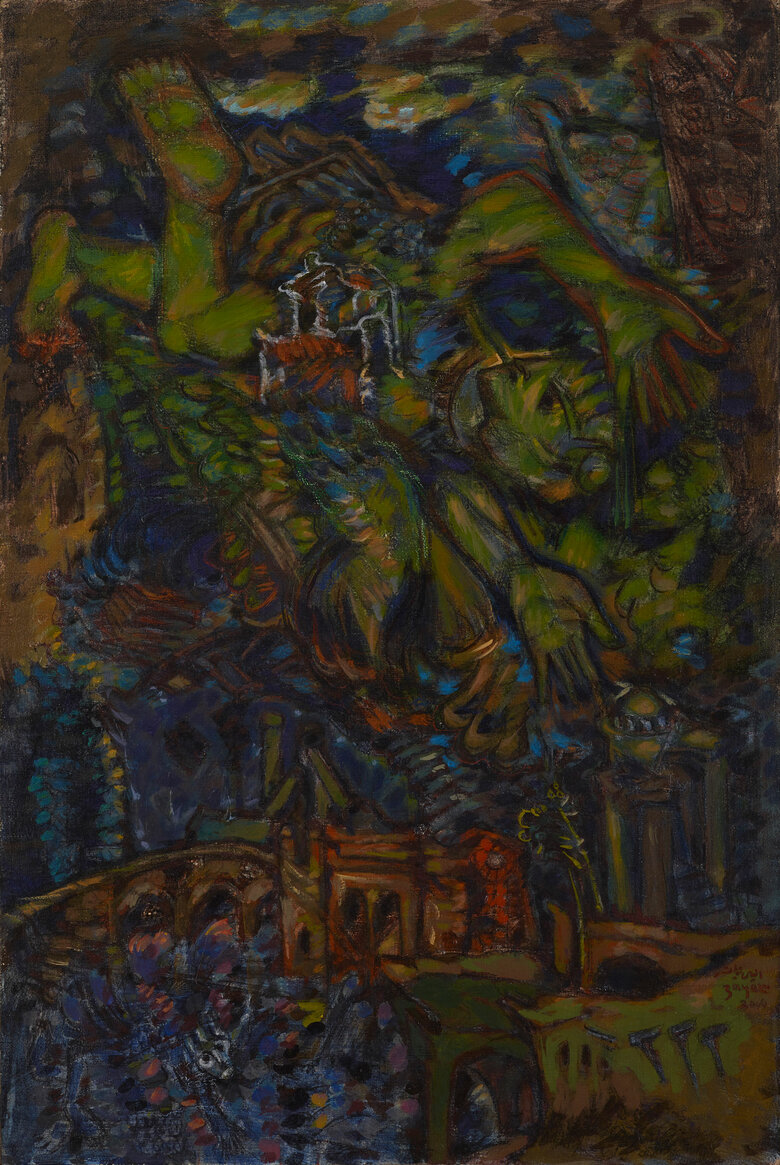 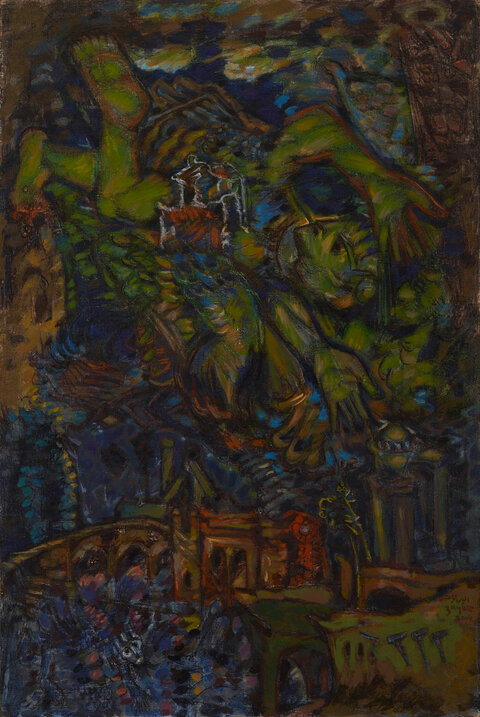 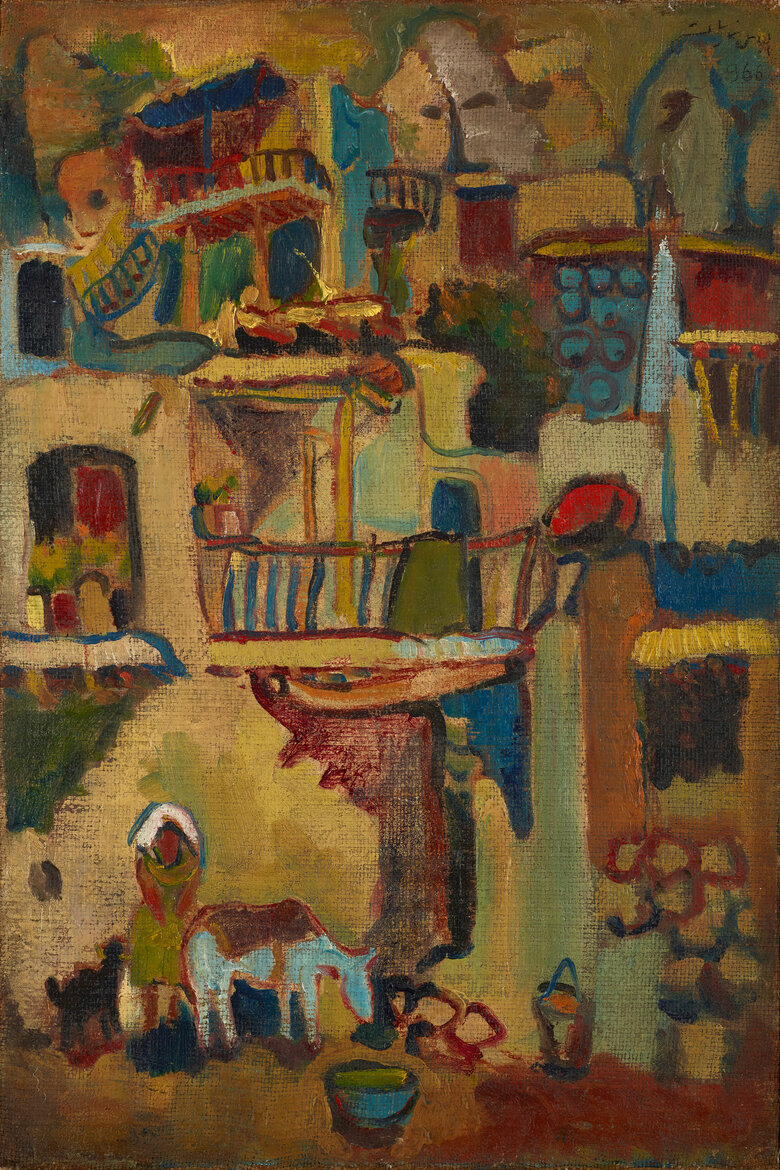 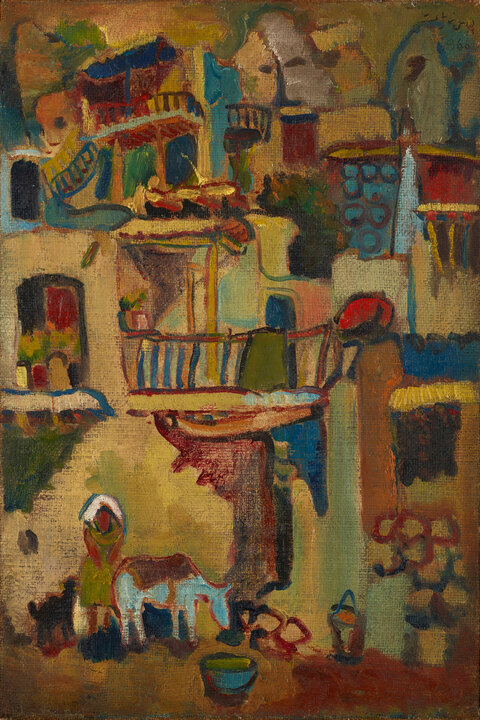 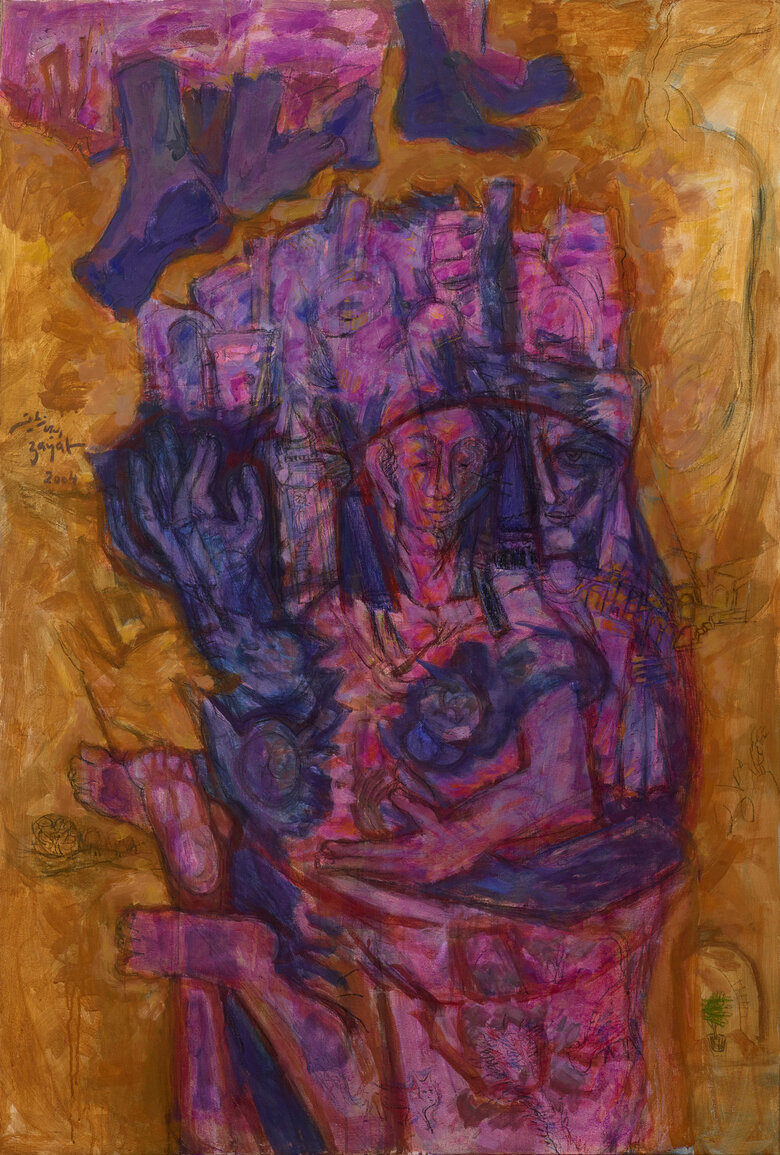 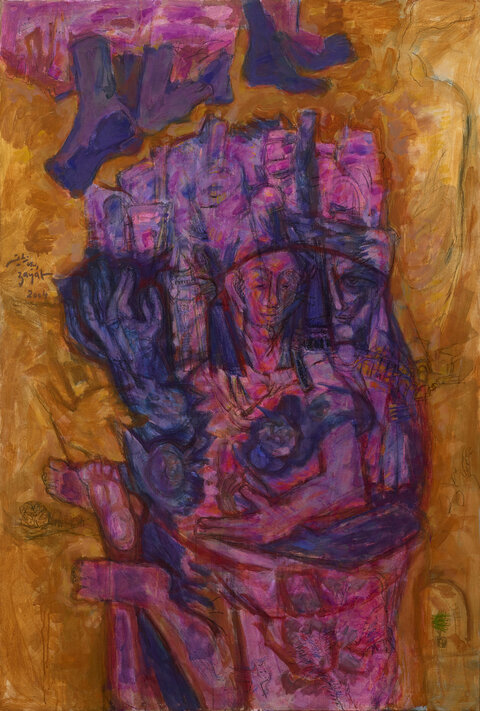 Dance of the City (Andalusian Scene) 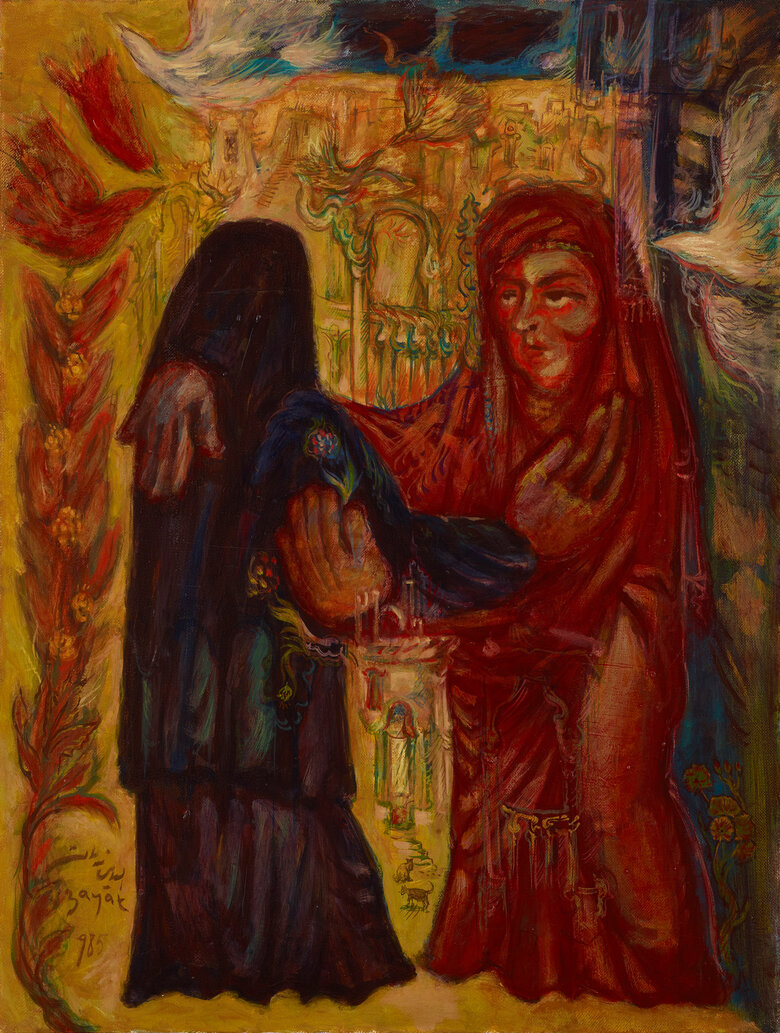 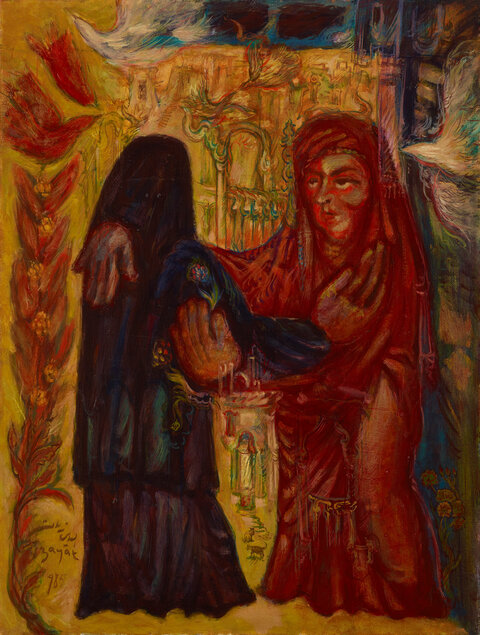