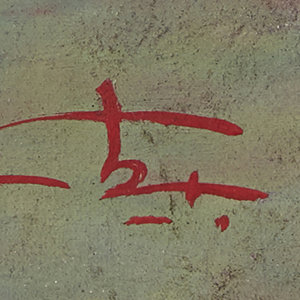 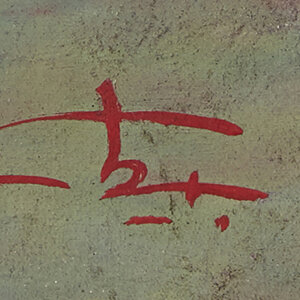 Hussein Amin Ibrahim Bicar was born to humble beginnings in Alexandria in 1913. After moving with his mother to Cairo at the age of fifteen, he enrolled at The Higher School of Fine Arts there and...

Hussein Amin Ibrahim Bicar was born to humble beginnings in Alexandria in 1913. After moving with his mother to Cairo at the age of fifteen, he enrolled at The Higher School of Fine Arts there and graduated in 1933. While in Egypt, he worked as an art teacher in Cairo and Qena and later continued his teaching career in Morocco after he moved to the North African country in 1939. Upon his return to his alma mater in Egypt in 1942, he assisted his mentor and lifelong friend, Ahmad Sabri, who was the chair of the Fine Arts Department. Following Sabri’s retirement in 1955, Bicar assumed this post. He left The Higher School of Fine Arts in 1959 to dedicate himself totally to Akhbar al Youm newspaper, where he worked until 1962. Bicar’s work was primarily shaped by his belief that art must acknowledge the interdependence of all societies while staying grounded in a foundation of the artist’s cultural heritage.

Bicar was a child prodigy, recognized initially for his immense skill in music. In fact, starting at the age of nine, the young Bicar gave lute lessons to women of Egyptian high society who could not take lessons from adult men due to cultural codes of propriety. His image as a musician lives on to this day: on January 2nd, 2017, which would have been the artist’s 104th birthday, Google’s Doodle page presented a self-portrait of the aged Bicar dressed in a white robe, tranquilly playing the Bouzouki. Interestingly, the artist achieved this success by playing by ear; he never learned to read musical notation.

In addition to his musical talents, Bicar was an illustrator, cartoonist, writer, and art critic. But he was mainly a genre painter and a portraitist known for the sense of peace and calmness his work instills in his audience. His career began in illustration, taking off when he became the first Egyptian artist to illustrate Arabic children’s books. He developed the field of illustrative art in both form and content, promoting the notion of the illustrator as an educational narrative painter and thus elevating the medium within the Egyptian art scene. In 1944, he illustrated a book called Al Ayyam, known in English as “The Stream of Days,” by Taha Hussein, which proved a spectacular showcase for Bicar’s works. As a result, he was appointed as an illustrative director for the children’s section in Akhbar Al Youm. In 1952, he shone as the illustrator of a lively colored comic magazine, Sinbad, inspiring both children and adults. Bicar was assigned to illustrate global news as a foreign correspondent for Akhbar Al Youm in 1959, and this job sent him throughout North Africa and other regions. One of his most iconic bodies of work is a series of gouache on cardboard illustrations for The Eighth Wonder, a historical documentary about the history of the Abu Simbel Temples, built in Nubia by Ramses II, that was produced during the site’s historic archeological relocation in the 1960s.

As a genre painter, Hussein Bicar was much inspired by southern Egypt, be it the countryside of Qena or the landscapes of Nubia. He was taken by the rural lifestyles he encountered in these warm, earthy regions, and entranced by the rich Pharaonic history that surfaced there. In accord with the teachings of the nationalist artist Mahmoud Moukhtar, Bicar believed in a revival of Egyptian cultural heritage that, while celebratory, left room for the importance of cross-cultural interaction. Amongst his most celebrated oil paintings were those depicting harvesting, especially ones produced during the 80s and 90s. He portrayed female peasants with graceful figures and placid faces, swaying through fields of crops or pulling water from the Nile in terracotta jars. Enchanted by the movement of their bodies in their long, traditional abayas, he depicted them almost theatrically, as stage dancers before perfectly orchestrated backgrounds of hazy green landscapes or Nubian architecture. Characterized by simple fluid lines and sculptural geometric shapes, Bicar’s work achieved a masterful balance between stylized figuration and formal abstraction in a calm, somber palette.

At times, he would infuse this somber palette with tones of pink, yellow, or turquoise, inspired by the colorful, Andalusian-inflected culture in Morocco. Except for some of his female figures, whose abayas are brightly hued, virtually all of his characters are clothed in a symbolic white. The artist insinuates here a spiritual purity and a nationalistic unity that gestures at once to the traditional garments of the Egyptian peasantry and the heritage of Ancient Egypt. An example of this signature “dress code” can be seen in the painting entitled Trees Die Standing (1995).

Best known as ‘the portraitist’, Bicar created arresting oil portraits in both vividly realistic and idealistic style. His keen observation enabled him to achieve terrific likenesses, bringing the person portrayed to life, wholly present before the viewer. His subject is generally portrayed in a pyramidal composition, centrally seated in a grand pose. Facing the viewer with gleaming eyes, fresh lips, and a graceful chest, they are all beautifully and regally portrayed. Careful attention to light and color, coupled with and smooth, steady brushstrokes, casts a glow over his portraits that shows only the best of their subjects. Bicar celebrated beauty during his lifetime and refused to depict ugliness, pain, or weakness.

The artist was a man of peace who believed in the divinity of the human figure and holiness of humankind. He was also a member of the Baha’i faith, which has been heavily persecuted in Egypt since their legal status as a recognized religion was annulled under Gamal Abdul Nasser in the 1960s. Bicar was jailed in 1980 for his religion and was later released for his esteemed reputation. This experience left an impact on his work: it is apparent in the iconic self-portrait he created after his arrest, entitled The Green Planet or I, The Past and the Present (1981). In this painting, he appears in a white undershirt, vertical bars separating him from a looming grey mountain and a bright, turquoise moon. The artist’s face is serene, and the bars are behind rather than in front of him; it is a portrait of humility, but also of hope.

Hussein Bicar passed away in 2002, in his home city of Cairo, leaving behind a significant cultural oeuvre.

For the love of Becar, Salama Gallery, Cairo Egypt

Exhibition for his Journalistic drawings

The Suzan Mubarak Award for Children’s Literature, High Committee Award for Lifetime Achievement in the Field of Children’s Books.
The Mubarak Prize for Arts

The Arts Certificate of Honor

The Merit Certificate of Arts

Gamal Abdel Nasser Award with participation of the Soviet Union

Certificate of Honor from Art Academy

Honorary Award of Biennale of Alexandria

The order of Sciences and Arts (First Class)

Patent of appreciation from Minister of Culture in Syria

The First Prize in painting at the Second Alexandria Biennial

The Gold Medal of Honor at the General Industrial and Agricultural Exhibition, Egypt 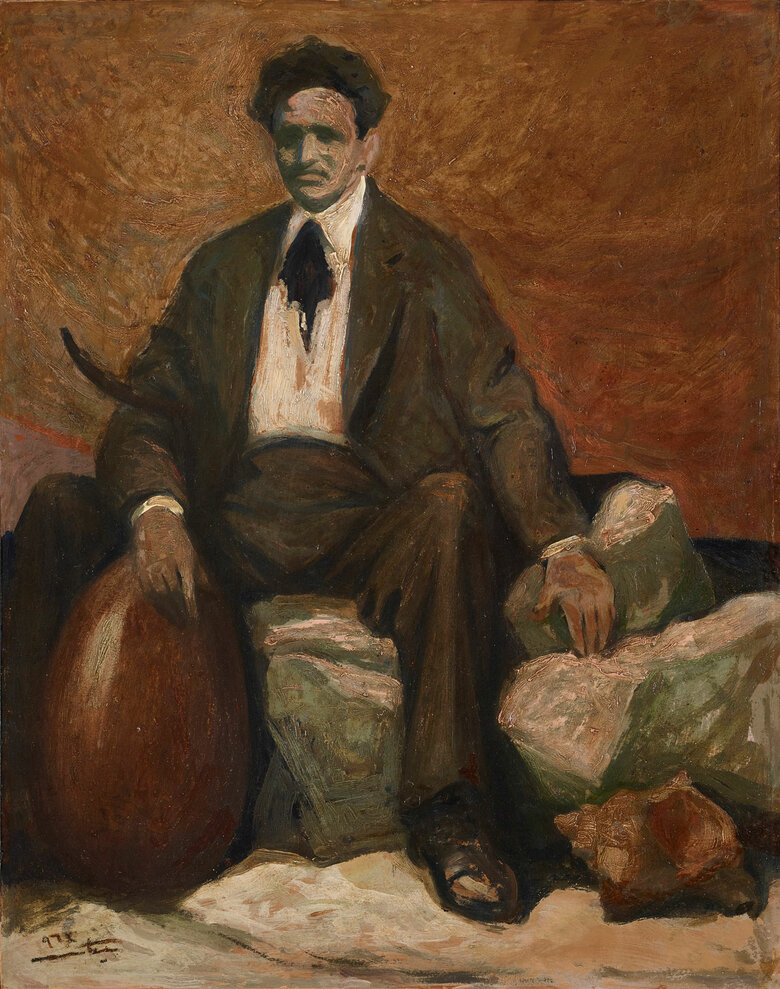 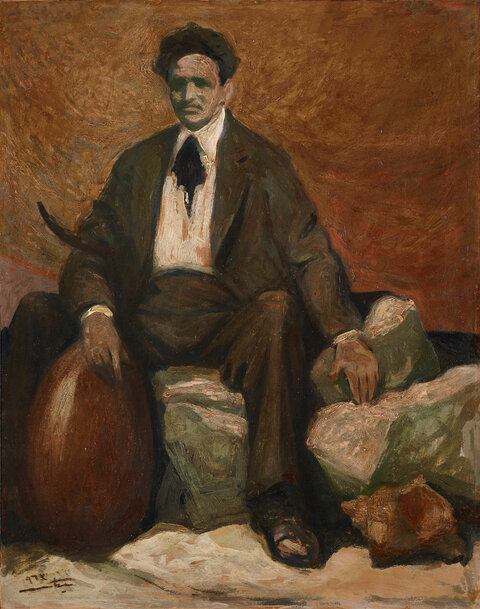 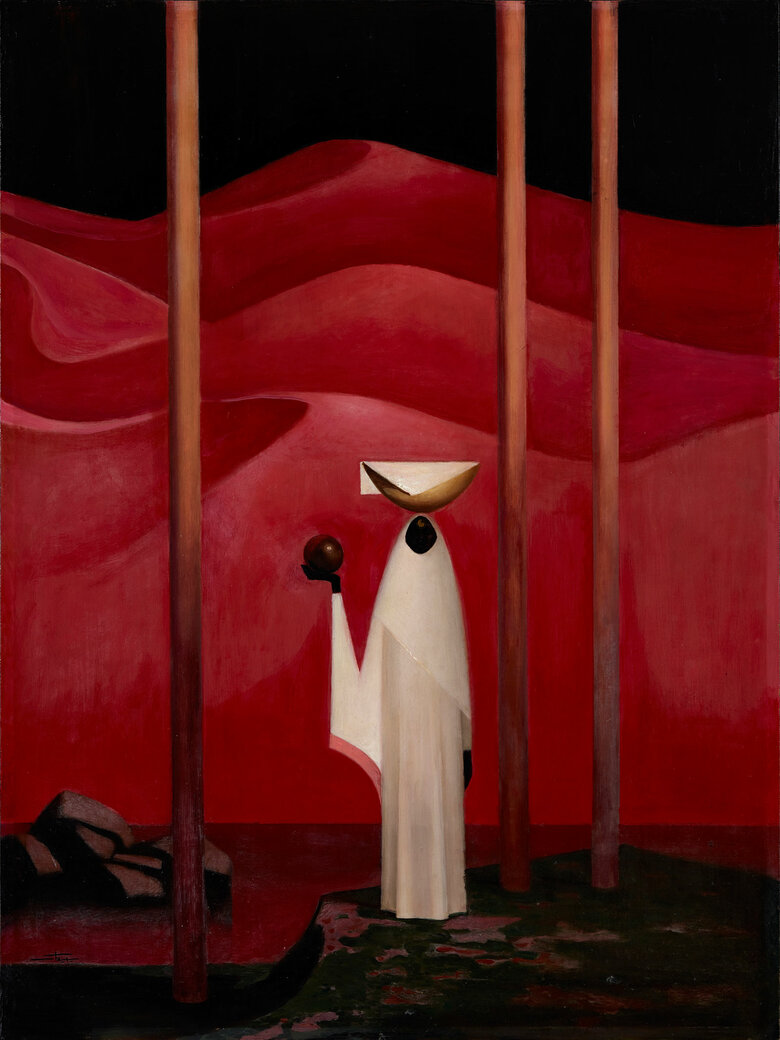 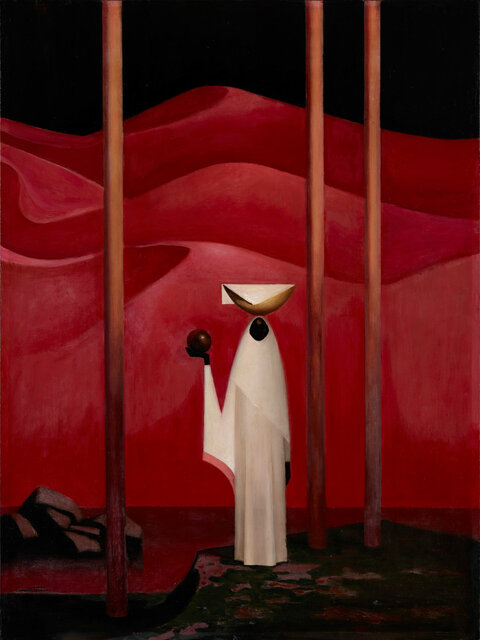 Palm trees and the mountain in Nubia 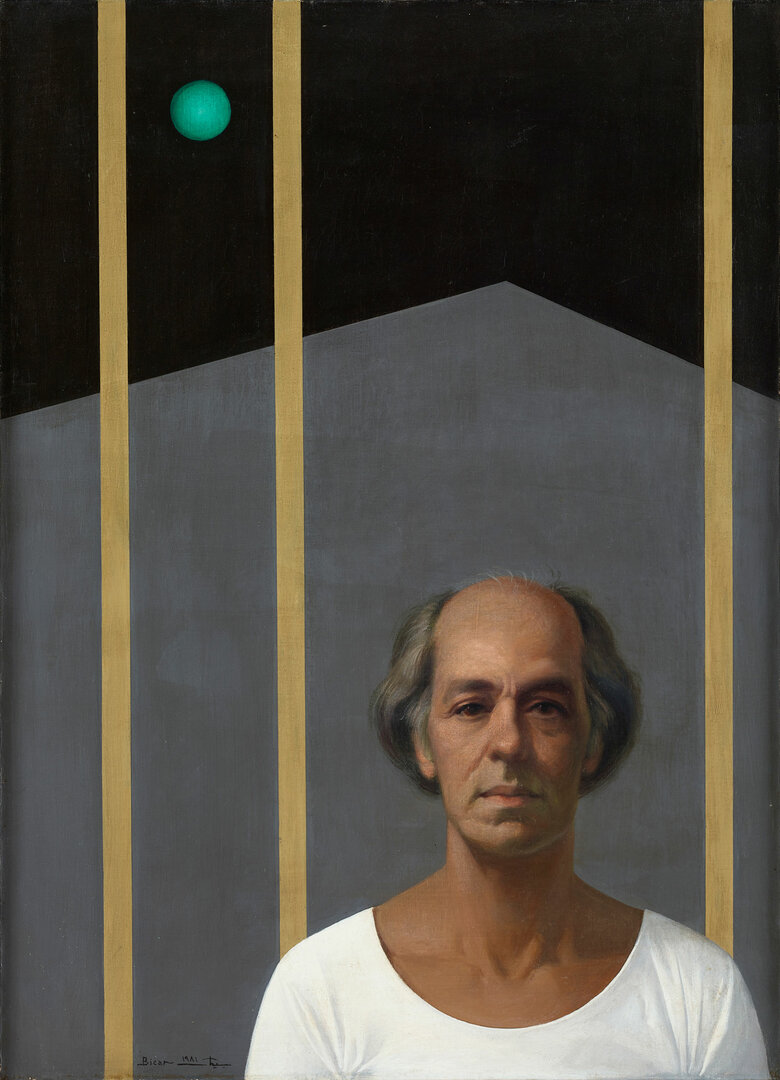 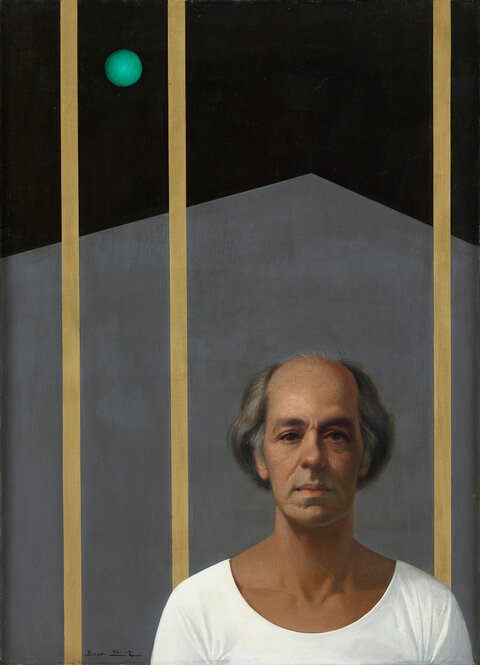 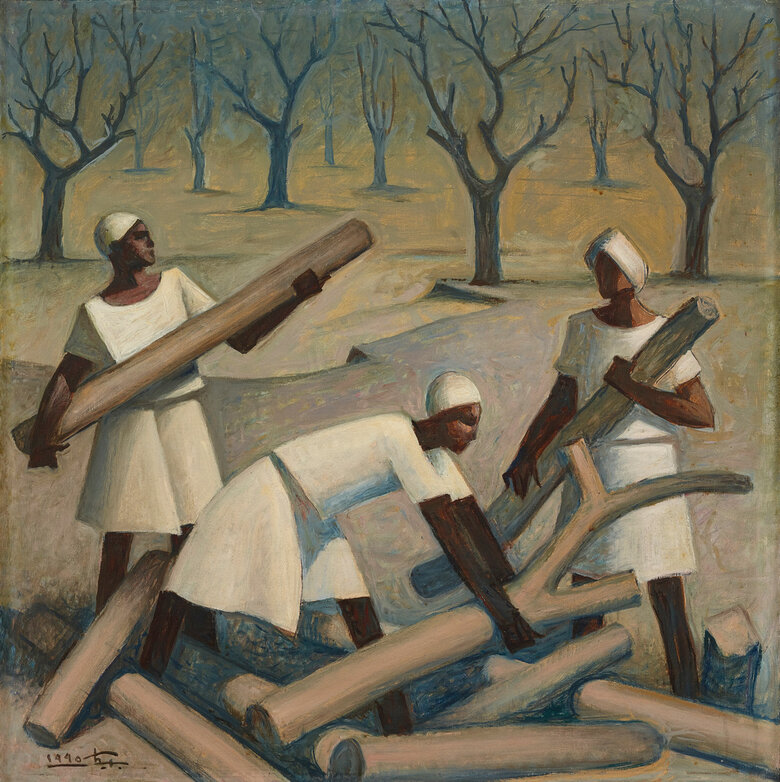 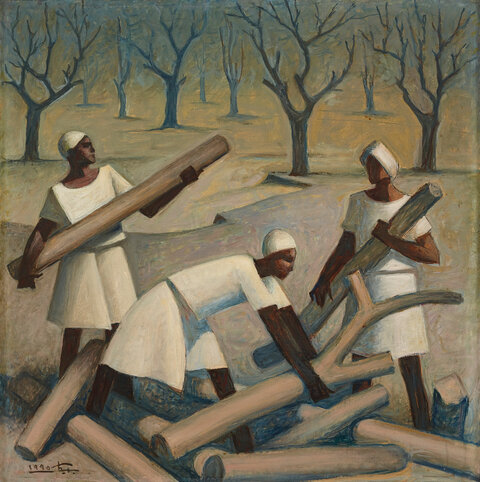 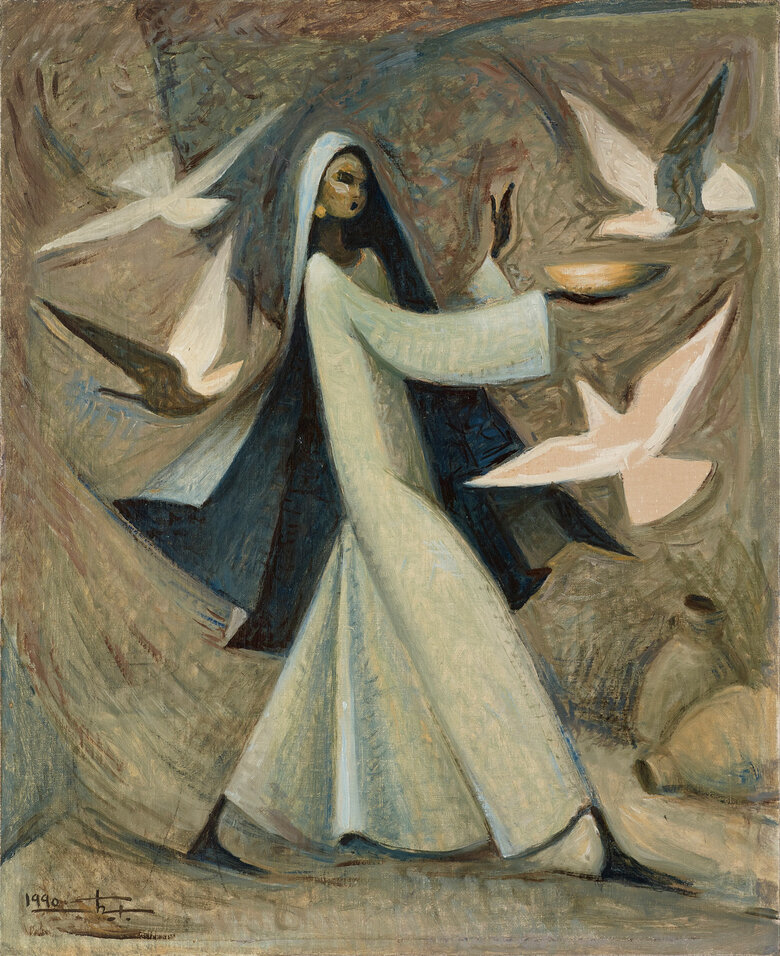 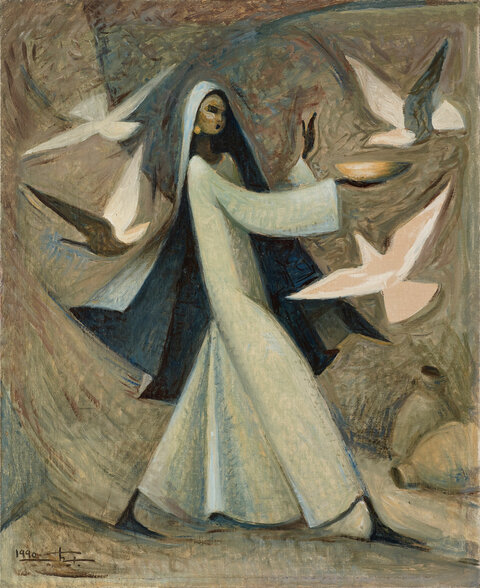