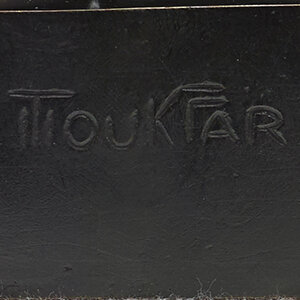 Written by Arthur Debsi Egyptian sculptor Mahmoud Mokhtar was born in 1891 in the small village of Tanbara. Mokhtar’s family was of modest means, and growing up in the Nile Delta, he depended on...

Egyptian sculptor Mahmoud Mokhtar was born in 1891 in the small village of Tanbara. Mokhtar’s family was of modest means, and growing up in the Nile Delta, he depended on the wealth and diversity of the Egyptian landscape for intellectual and artistic inspiration. Most authors agree that his rural childhood had a significant impact on the artist; from an early age, he made small figurines of animals or farmers from the mud he collected along the banks of the Nile. Afterward, the tenacious youngster would put his sculptures in the oven to dry, as he had seen professional ceramicists do.

At the beginning of the 20th century, the family relocated to the Abdin district of Cairo, where Mokhtar began attending school and witnessed the rapid transformation of a modernizing city for the first time. On May 12th, 1908, Prince Youssef Kamal (1882-1969) founded the School of Fine Arts in the district of Darb al-Gamamiz, forever altering Cairo’s artistic and cultural scene.  The School of Fine Arts was the first institution of its kind in the Arab world, and Mokhtar was one of its first applicants. Upon his admission, the artist studied drawing and then sculpture under the tutelage of the French sculptor Guillaume Laplagne (1870-1927), who was also the director of the institution. At the Laplagne’s behest, Prince Youssef Kamal offered Mokhtar a scholarship when he graduated, intended to fund his continued education in Paris. He arrived in the French capital in August 1912, where he enrolled in French lessons and joined the atelier of Jules-Felix Coutan (1848-1939). The following October, he was admitted to the École des Beaux-Arts.

At a time of his arrival in Paris, the French empire was thriving, and Arab students were still a relatively rare sight in French institutions of higher learning. As a new student at the École des Beaux-Arts, Mokhtar endured a hazing –a standard practice among art students at the time– that was tinged with exoticism. His classmates stripped him naked, painted his body, and carried him, elevated on a chair, throughout the streets of the Saint-Germain-des-Près district, all the while heralding him as the “Pharaoh Ramses.”

The same year that Mokhtar arrived in Paris, German archeologist Ludwig Borchardt (1863-1938) discovered the famed Bust of Nefertiti at the Tel el-Armana archaeological site,  whisking it away to Germany behind the backs of Egyptian officials. A decade later, British Egyptologist Howard Carter (1874-1939) found Tutankhamun’s tomb, remarkably well preserved, in the Valley of the Kings. Expeditions like these ­–and sensationalized media coverage of them– contributed to a wave of “Egyptomania,” a term that refers to a longstanding Euro-American obsession with Ancient Egypt. A specific, romanticized understanding of “the land of the Pharaohs” influenced entertainment, interior décor, and architecture from Paris to Los Angeles. Still, actual Egyptians were seldom consulted about the accuracy of the forms and stories at play. In France, Mahmoud Mokhtar realized with dismay that the Western collective imagination limited Egypt to myths about its ancient pyramids, ignoring centuries of Arab and Islamic history.

At the same time, Mokhtar argued, there had been no practice of sculpture in Egypt for over 1700 years, and ancient Egyptian sources thus provided the best point of reference for sculptors seeking to develop an Egyptian national art. He and like-minded peers rallied in support of Neo-Pharaonism, a loose movement of aesthetic trends that drew inspiration from ancient Egypt to create new, modern forms for a new, modern Egypt. Neo-Pharaonism was strongly allied with nationalism, namely,  the demand for Egyptian independence from Britain, and sought a visual style that reflected Egypt’s uniqueness as an ancient civilization situated at the crossroads of Asia and Africa. As calls for independence began to echo throughout his home country, Mokhtar watched from abroad.

The artist had managed to live between Egypt and France through the First World War, but remained in Paris after the end of the conflict, replacing Laplagne as the sculptural director of a wax museum, the Musée Grévin, for two years. During this time, Egypt transformed. Following the exile of Wafd Party leader and ardent Egyptian nationalist Saad Zaghloul (1859-1927) by the British colonial government, Egyptians mobilized to oust the colonial regime and seize national independence, which they achieved in 1922. Though he could only experience these events through the media, Mokhtar was deeply impacted by them and was inspired to create a work representing the promise of this popular movement for independence. In 1920, he created a small sculptural model entitled Nahdat Misr, or “Egypt’s Awakening,” for the Salon des Artistes Français. The sculpture so moved a group of visiting Egyptian students that they returned to Cairo with a proposal to fund and erect the statue on a monumental scale. Inaugurated on May 20th, 1928, Nahdat Misr ultimately became one of Egypt’s most recognizable nationalist monuments as well as one of Mokhtar’s most important public works. It stands to this day, facing the University Bridge in Giza.

Nahdat Misr is a key example of Neo-Pharaonic tendencies in art. The monument depicts a veiled woman standing with her hand on a sphynx, staring serenely into the horizon; all at once, it evokes Egypt’s past, present, and future. The sphynx is a renowned emblem of ancient Egyptian artistic and technical mastery, while the clothing of the woman suggests Egypt’s contemporary Islamic history. Gazing ahead, the woman looks expectantly towards the future, implied to include independence and a subsequent return to “authentic” Egyptian culture.

Part of the Dalloul Art Foundation’s collection, the famous sculpture Au Bord du Nil(On the Banks of the Nile), is another example of the nationalist tendencies in Egyptian art, embodied in the figure of the peasant woman or fallaha. Cast in bronze, the fallaha stands tall, expertly carrying a jug of water on her head.  She wears a long dress that conforms tightly to the curves of her body, and her hieratic face is framed by a traditional veil or tarha. The woman’s generic facial features and the marriage of her flat feet to the sculpture’s base clearly recall the characteristics of ancient Egyptian statuary, as in the sculptures found in Pharaonic temples or tombs. Prominent cheekbones and an angular nose give the figure a subtly masculine strength, emphasized by the firmness of her stance and the continuity of her body with the ground she stands on.  Though Mokhtar’s references to ancient Egyptian sculpture are dominant and deliberate, Au Bord du Nil lacks the rigidity and massive volumes of monumental Pharaonic works, softened instead by the dynamism of the fallaha’s curves and clothing. Devoid of unnecessary detail, the smooth bronze also evokes the streamlined aesthetic of the Art Deco movement that held Paris in thrall at the time of the sculpture’s creation.

Au Bord du Nil is an example of the fixation with Egyptian peasantry that animated strains of Egyptian nationalist art, including Neo-Pharaonism. The figure of the fallah (male) or fallaha (female) is omnipresent in the oeuvres of nationalist artists, where it personifies the twin notions of historical continuity (‘al-istimrariyya’) and national specificity (‘al-khususiyya’). Nationalists mobilized the figure of the fallah because of the perception that peasant life had not changed much over 5,000 years, with farmers and laborers perpetuating ancient customs and ways of life into the twentieth century. The peasantry came to represent a guarantor of Egyptian authenticity; whereas the urban elite had been Occidentalized by the colonial system, peasants remained “pure” in their Egyptianness.

The importance that Mokhtar accords to women in Nahdat Misr and Au Bord du Nil also corresponds to revolutionary ideology, which honored the place of women in the national struggle. Many women, such as Safiya Zaghloul (1876-1946), nicknamed ‘Mother of the Egyptians,’ or Huda Sharawi (1879-1947), were vocal agitators for national independence and women’s rights. Probably the artist was inspired by images of these feminists wearing their veils while demonstrating in the streets. The depiction of veiled women, specifically, is significant because the practice of veiling had recently fallen under scrutiny in Egypt, where individuals like Qassim Amin(1863-1908) argued that unveiling was vital to the rights women needed in order to modernize Egypt. Amin and others were criticized by nationalists for subscribing to Occidental gender norms, and many accused advocates of unveiling as wanting to Westernize women rather than liberate them. In Mokhtar’s work, though, women’s clothing does more than symbolizing resistance to Western influence; it produces movement, creates a dialogue of crisp lines and soft curves. His figures sometimes lift their veils, signifying the end of a dark period and a step towards the bright future.

The nationalist connotations of peasantry and femininity come together in the form of the fallaha. During its campaign for independence, Egypt was commonly personified as an idealized peasant woman. As a peasant, she signified authenticity and resistance to Westernization, and as a woman, she represented fertility and strength. Most of the female characters in Mokhtar’s work are represented in relation to the Nile river, posing or fetching water. As the Greek historian Herodotus (d. 426 B.C.) said in the 5th century B.C., ‘Egypt is a gift of the Nile;’ like a mother, the river and its fertile soils nourished the people of ancient Egypt and enabled them to build one of history’s most advanced civilizations. In representing the Egyptian woman as intertwined with the Nile, Mokhtar underscores the life-giving abilities of both, reinforcing the complex nature of the Egyptian people and their land.

Mahmoud Mokhtar embodied the legend of the common boy from the countryside predestined to the life of an artist. Dedicating his talent to Egypt, he translated his hopes for his country’s independence into sculptures for all audiences, creating work that was strikingly modern but steeped in Egypt’s rich heritage. The artist died of leukemia in 1934, but managed in his short career to create works that inspire Egypt to this day.

Tea with Nefertiti: The Making of the Artwork by the Artist, the Museum and the Public, Mathaf: Arab Museum of Modern Art, Doha, Qatar
Le Corps découvert, Institut du Monde Arabe, Paris, France

Exhibition of the Centennial of the Faculty of Fine Arts, Palace of the Arts, Opera House, Cairo, Egypt

Exhibition of the first graduating class of the School of Fine Arts, Cairo, Egypt

Prize of The Salon de Paris

In Conversation With : Alex Seggerman Part 1 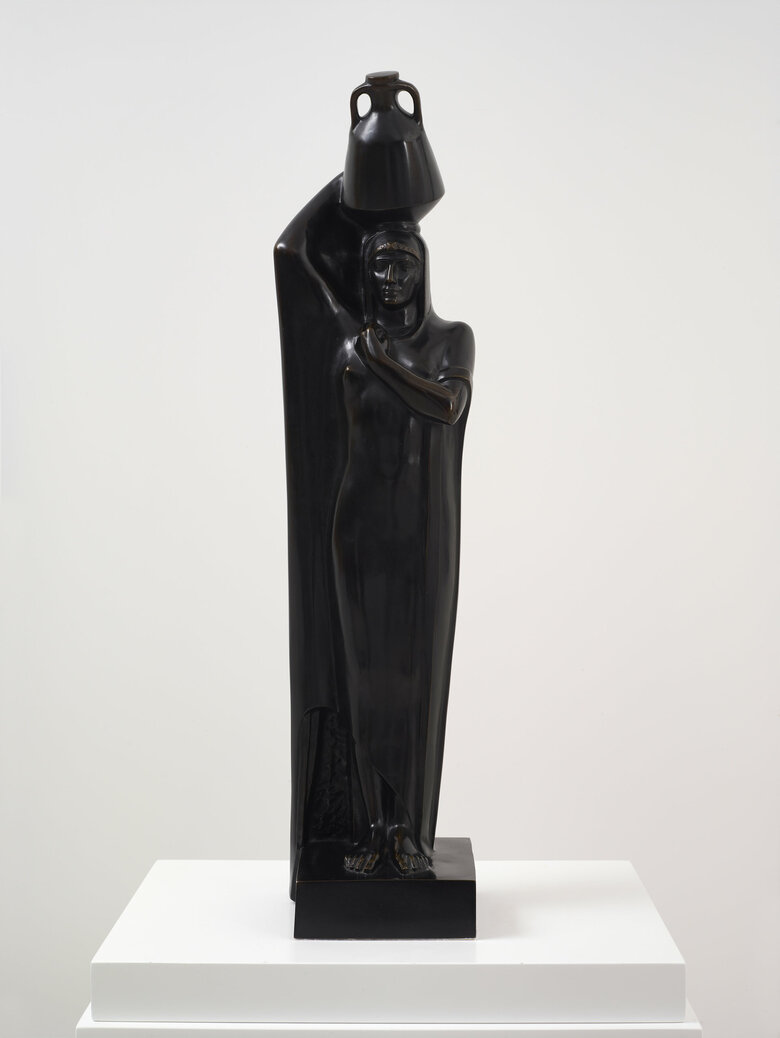 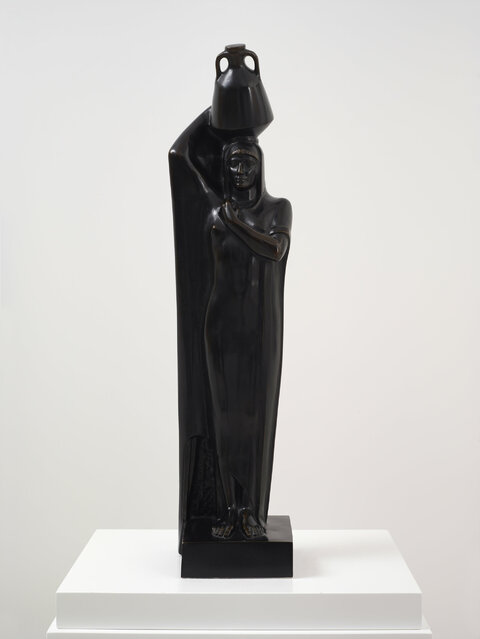 AU BORD DU NIL (ON THE BANKS OF THE NILE)

Art lovers in for a treat as museums prepare to reopen