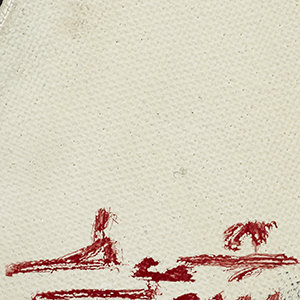 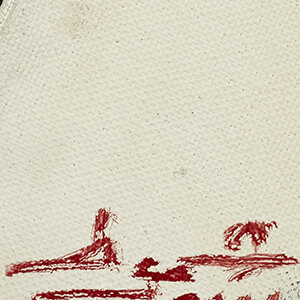 Written by Wafa Roz Ismail Shammout, a leading figure in modern Palestinian art, was born in 1930 in Lydda, the second of eight children in a working-class family. During his school days in Lydda,...

Ismail Shammout, a leading figure in modern Palestinian art, was born in 1930 in Lydda, the second of eight children in a working-class family. During his school days in Lydda, he was mentored by the renowned Jerusalem painter Daoud Zalatimo. Shammout attended the University of Fine Arts in Cairo from 1950 to 1954 and pursued further education at the Academia Di Belle Arti in Rome from 1954 to 1956. Shammout headed the Department of Arts and National Culture of the Palestine Liberation Organization (PLO) from its inception in 1965, and in the late 1960s, he co-founded the Union of Palestinian Artists. He was elected as this union’s Secretary-General in 1969, the same year he established the Dar al-Karama Gallery in Beirut. He became the General Advisor of the Union of Arab Artists in 1971.

Shammout drew inspiration for his nationalistic work from his firsthand experience of the Nakba. In July 1948, Shammout’s hometown of Lydda fell under the Zionist attack, suffering aerial bombardment before becoming the site of one of the Nakba’s deadliest massacres of Palestinian civilians. Zionist troops forced Lydda’s inhabitants to evacuate their homes, and eighteen-year-old Shammout became one of the hundreds coerced into walking what is now known as the “Lydda Death March.”

Ordered at gunpoint to walk miles in the merciless summer heat, Shammout would never forget this gruesome journey, during which his two-year-old brother, Toufic, died of dehydration. This tragic episode inspired Shammout’s first critically acclaimed painting, Where To? (1953).

A terrible two weeks after leaving their home, the Shammouts settled in a refugee camp in Khan Younis, Gaza. In 1950, Ismail took the train from Khan Younis to Cairo to pursue his artistic career. He got a job as an illustrator of Egyptian film posters for an advertising agency, attending college during the day and working through the night. Influenced by his instructors, especially Egyptian modernists Hussein Bicar, Hosni el Banani and Youssef Kamel, as well as his former mentor Daoud Zalatimo, Shammout developed an expressive figurative style through which he transformed his painful experiences into nationalistic iconography. Shammout’s career as a painter began with roughly autobiographical scenes but grew over time to encompass broader allegorical compositions that stirred pro-Palestinian sentiment among his audiences.

In his earliest works, executed in oil on canvas, he portrayed poverty, displacement, and suffering in a realistic style. During this period, in 1953, Shammout mounted his first show in Gaza, exhibiting the iconic Where to? for the benefit of his fellow refugees. The painting featured a drained, yet steadfast, an older man holding his children – or perhaps his grandchildren – tightly as they walk into the unknown. That this painting convincingly communicated the agony of his people was evidenced by the exhibition’s success; the refugees in attendance, many of whom were barely familiar with Western-style easel painting, were deeply moved by the painting, which became an instant symbol of the Palestinian cause.

It was in Cairo, in 1954, that Shammout held his first acclaimed show along with his colleague Tammam El Akhal, whom he married in 1959. This exhibition was pivotal in Shammout’s career, earning him remarkable public recognition and promoting his talents in the cultural capital of Cairo. Gamal Abd al-Nasser inaugurated the show, and Yasser Arafat – then the head of the Union of Palestinian Students –attended it. In 1958, the artist moved to Beirut, where in the 1960s, he became the Director of the Department of Arts and National Culture of the PLO. He designed the PLO’s first logo and produced political posters and pamphlets promoting national resistance. These posters attained an expressive-symbolic style, in line with the ethos of socialist realist art popularized by the cultural regimes of the Eastern Bloc. Art, according to this mindset, should communicate direct messages that are easily understood by people from all backgrounds, helping to unify the proletariat in support of national liberation.

As the Palestinian national resistance grew in the late 1960s and 1970s, Shammout’s narrative paintings reflected determination and optimism. He transformed his previous somber color palette into a vibrant one and replaced the grim figure of the refugee with a young and robust fighter. He also portrayed women, dressed in the traditional Palestinian thobe and adorned with Tatreez, the intricate, brightly-colored embroidery for which Palestinian craftswomen are famous. Drawing from verbal imagery, such as Mahmoud Darwish’s poem Lover from Palestine, Shammout gave visual form to the allegory of Palestine as a female body, defining the peasant woman, with her traditional dress, as the symbol of the homeland. As expressed by Palestinian art historian Tina Sherwell, Palestine came to be represented as both a mother and a virgin, simultaneously nurturing, life-sustaining, and possessed of honor that required defense.

After the Israeli invasion of Lebanon in 1982 and the subsequent expulsion of the PLO, Shammout fled to Kuwait. The Gulf War displaced the artist again in 1991 when he left for Germany and later settled in Amman. In 1997, after nearly fifty years, Shammout and his wife Tammam El Akhal returned to Palestine to visit what was once their home cities, Lydda and Yaffa. Shammout was shocked when he saw his family house inhabited by Israeli citizens.

As an homage to the history of their people, the couple produced a series of nineteen mural-like paintings entitled Palestine: The Exodus and the Odyssey, between 1997 and 2000. Shammout’s contributions, which comprise eleven out of the nineteen, are packed with masses of people on canvas, sketched in scenes that vacillate between utopia and dystopia. The application of paint in swift, vibrant strokes and color gradations lends the canvases a scintillating effect, enhanced by the sharp edges of his fragmented figures. Scenes from Palestinian history overlap in multidimensional compositional narratives, using visual strategies reminiscent of Mexican Muralism. In cinematic succession, Shammout presents a joyful depiction of life in the 1930s, The Spring That Was (1997), followed by the exodus, the struggle, and the resistance, and paying tribute to Palestine’s fallen martyrs. The series concludes with The Dream of Tomorrow (2000), a hopeful image that portrays children flocking to a benevolent Mother Palestine, gathering flowers and fruits for her as birds fly freely overhead.

Shammout Passed away in Amman in 2006, having left an indelible mark on Palestinian art history.

Blincoe, Nicholas. "When Artists Go to War: Inside the PLO's Information Department." The Guardian. May 13, 2014. Accessed December 07, 2018. https://www.theguardian.com/artanddesign/2014/may/13/plo-palestine-art-the-world-is-with-us.

"Ramallah: Seminar and Exhibition on the Life and Work of Ismael Shammout." A M Qattan Foundation. February 19, 2018. Accessed December 07, 2018. http://qattanfoundation.org/en/qattan/media/news/ramallah-seminar-and-exhibition-life-and-work-ismael-shammout.

The World is with Us: Global Film and Poster Art from Palestinian Revolution,1968-1980, London, UK

Where To?, Gaza, Palestine 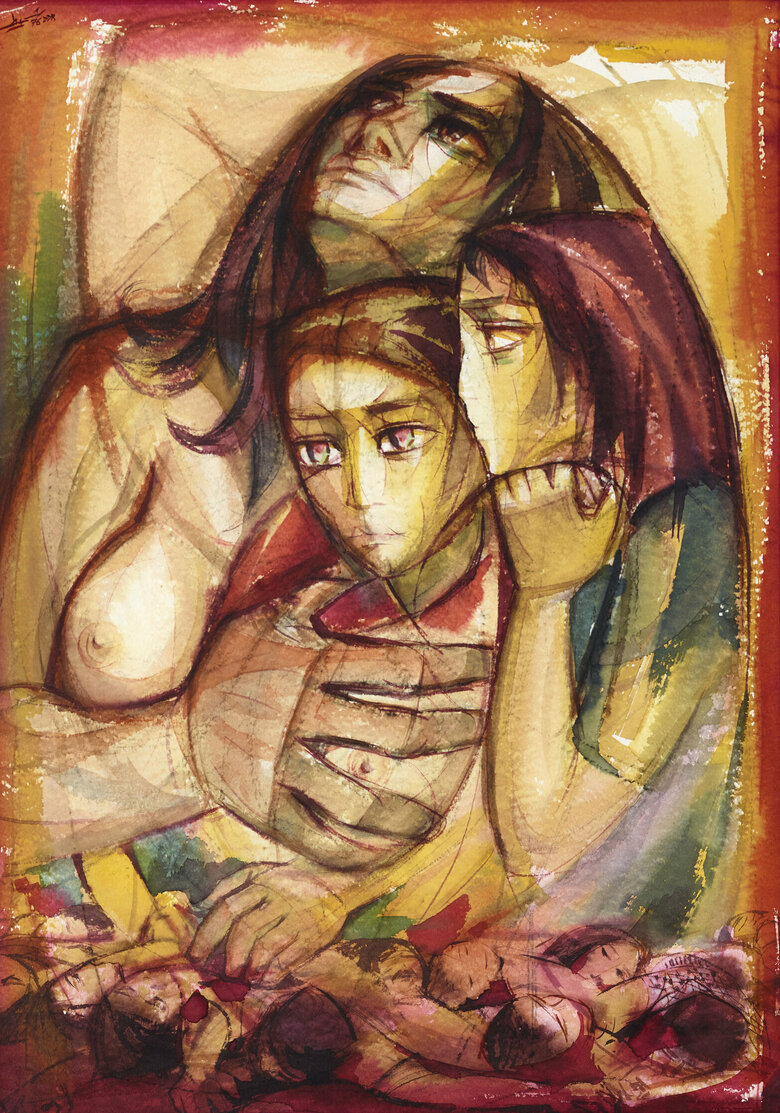 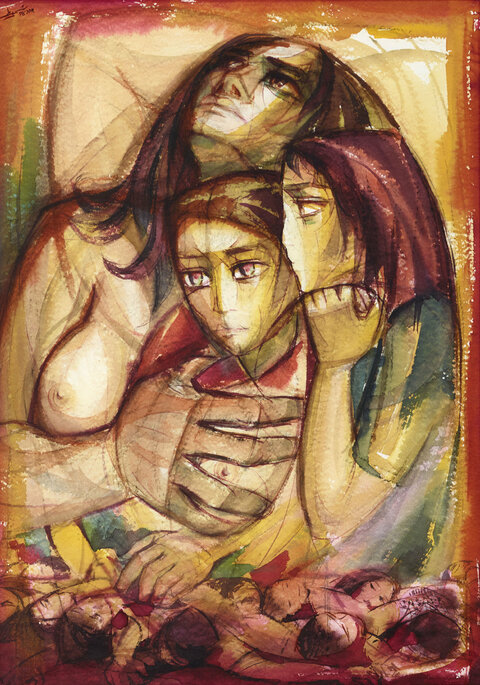 In the Eye (from the Tall Al Zaatar Series) 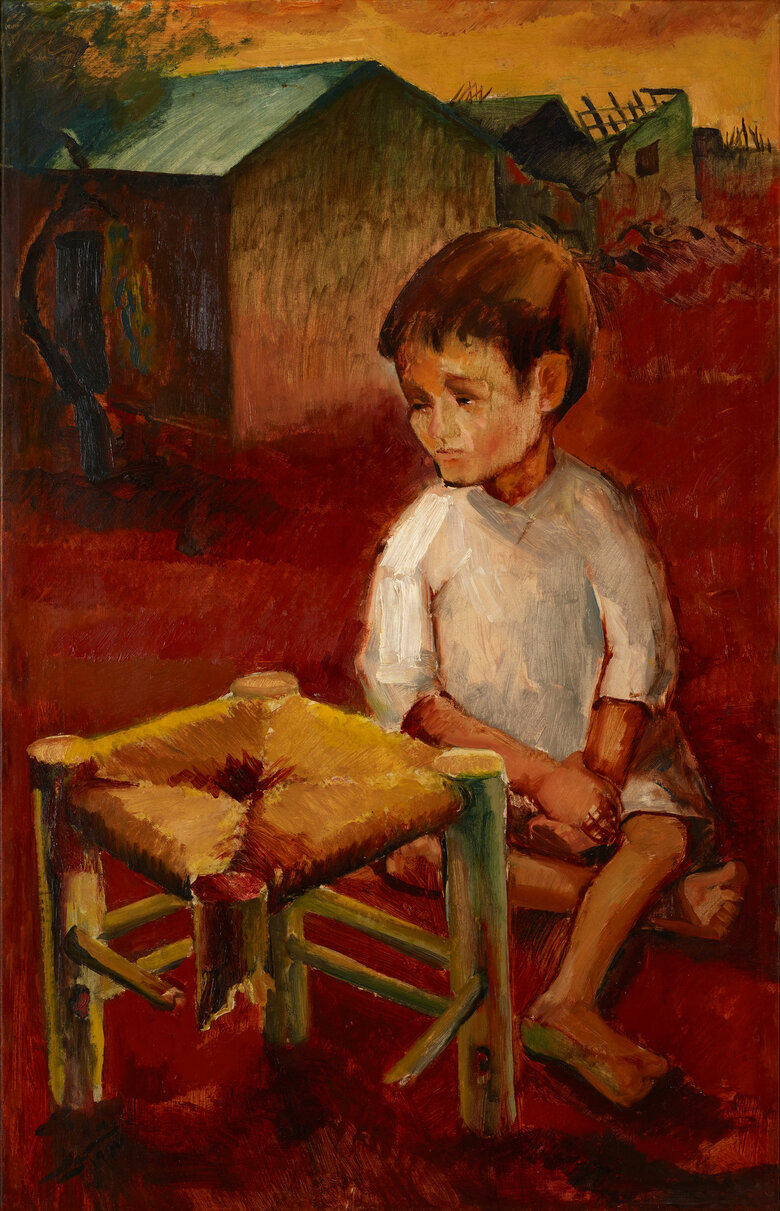 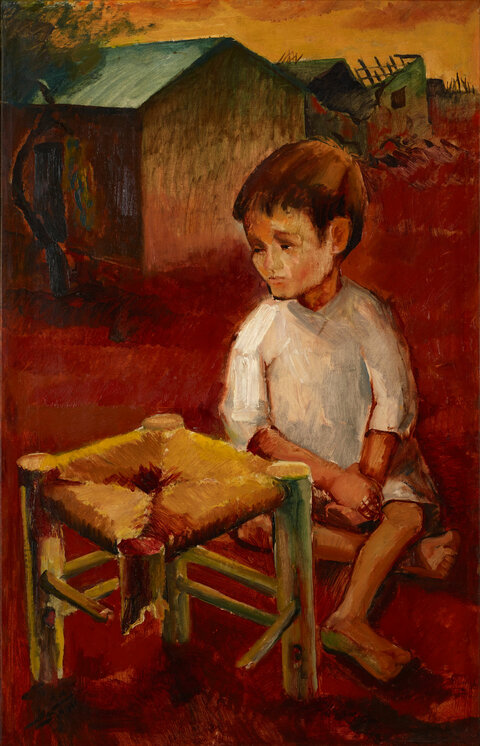 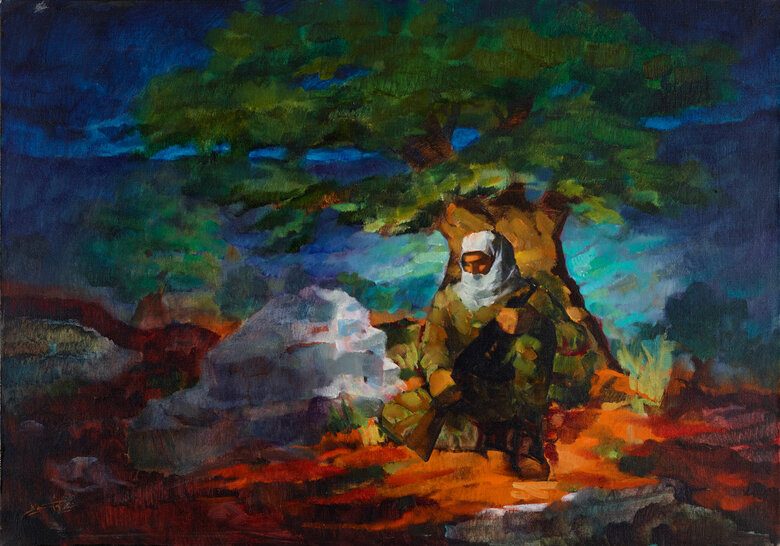 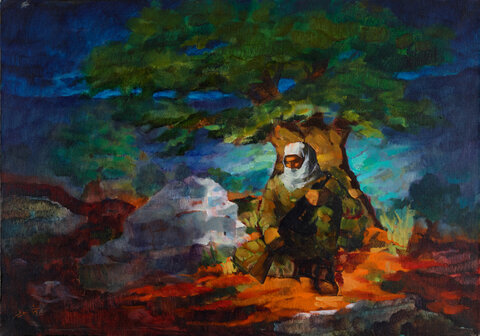 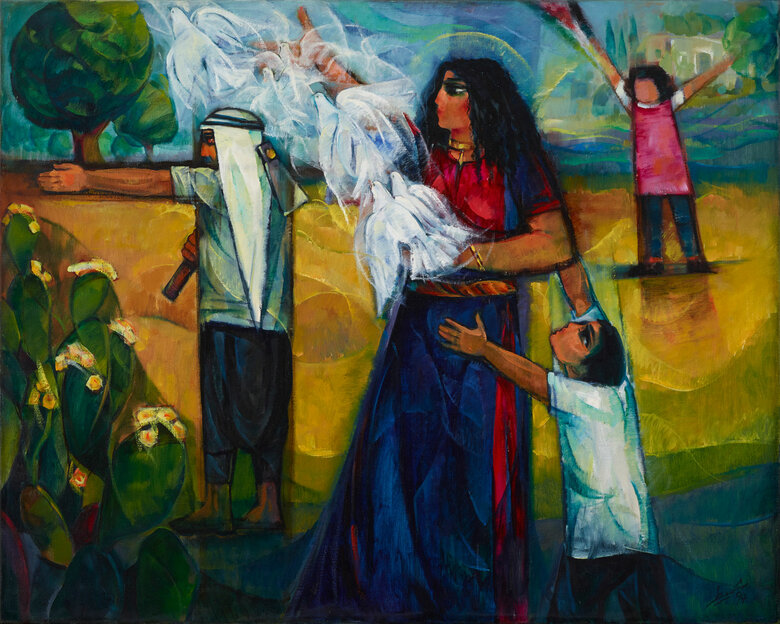 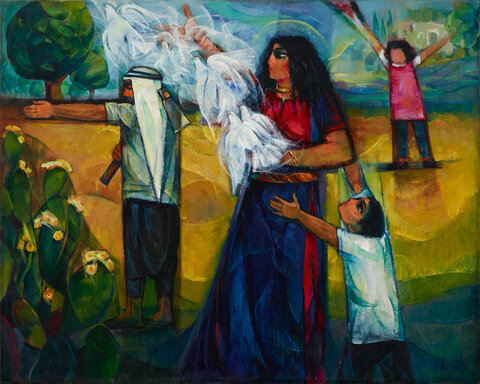 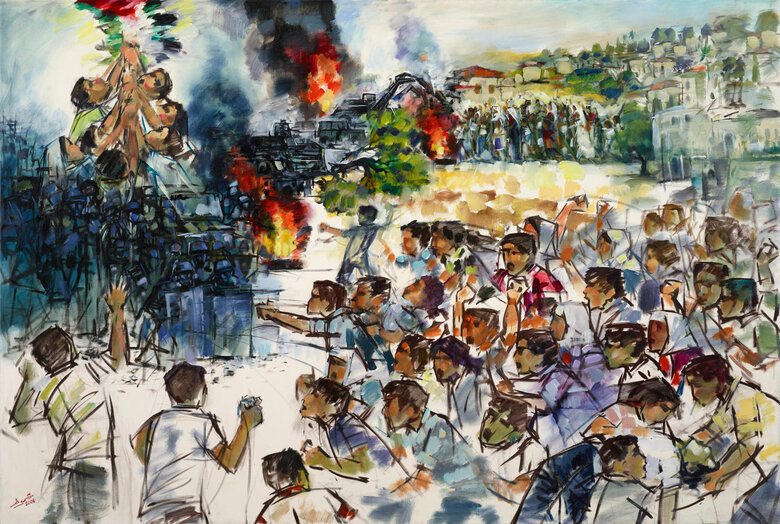 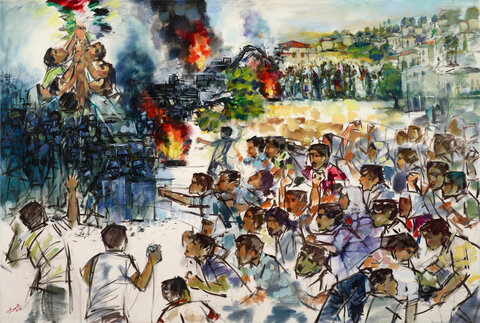 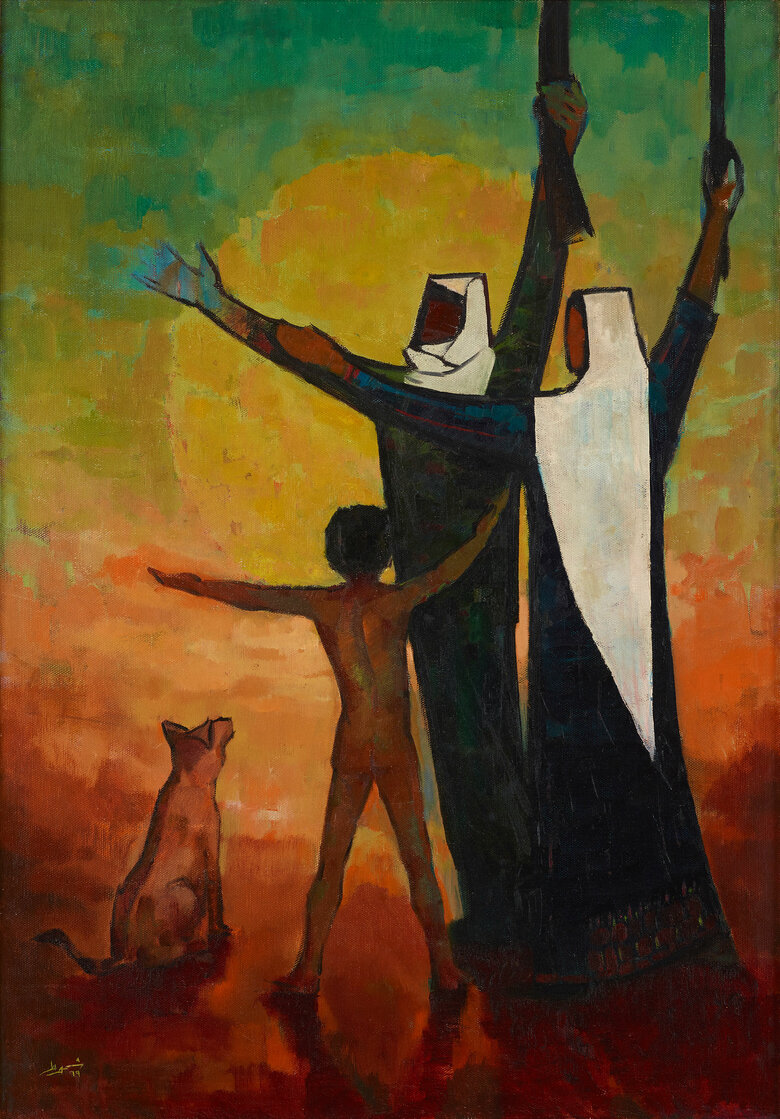 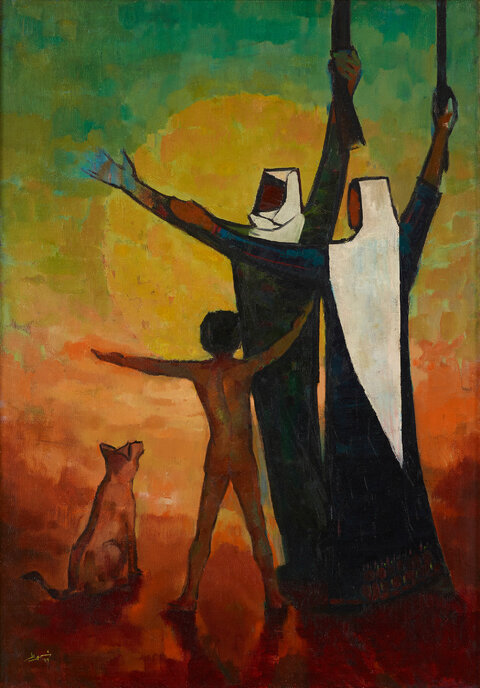 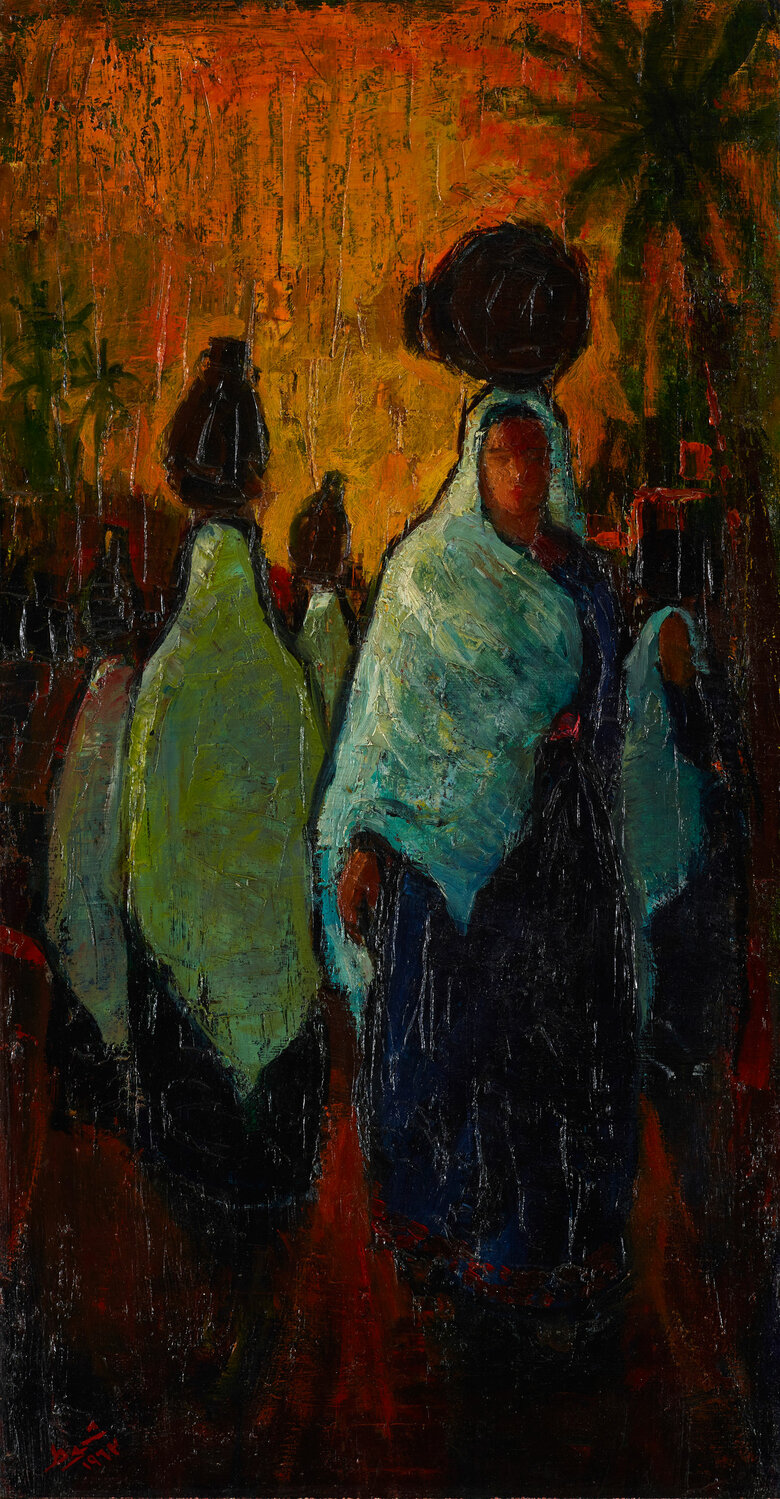 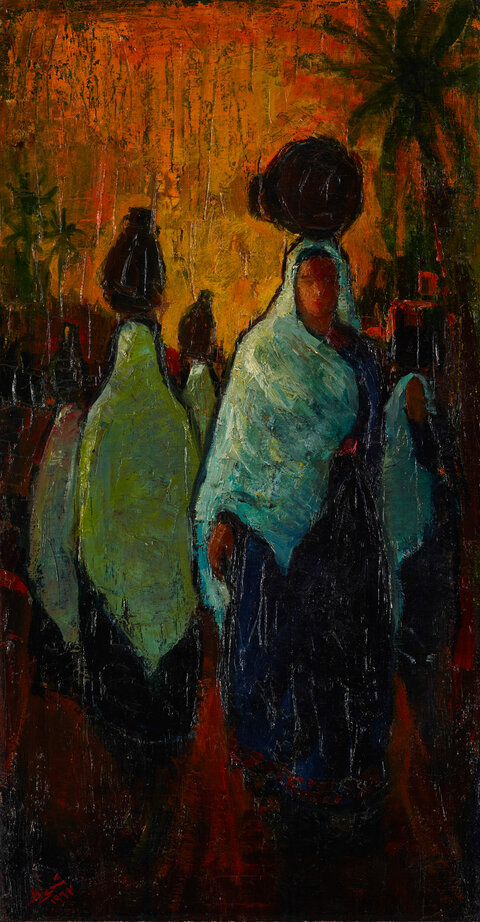 Nakba Day: 11 artworks that reflect on Palestinian identity and occupation