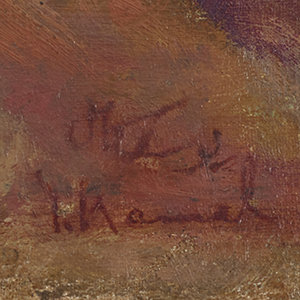 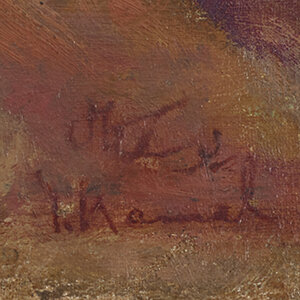 Born in 1891 in the neighborhood of El Zaher in Cairo, Youssef Kamel grew up in a popular district of the capital city, called Darb al-Ahmar. Following the steps of his father, Kamel started his studies at the École des Arts et Métiers in order to become an engineer, but eventually stopped. In 1908, Prince Youssef Kamal (1882-1969) founded the School of Fine Arts in Cairo, which was the first institution dedicated to plastic art education, and the French sculptor Guillaume Laplagne (1870-1927) was appointed director of the establishment. Kamel was among the first students to register in, and started studying at the painting department, which was back then headed by the Italian painter, and teacher Paolo Forcella. Yet, coming from a modest family background, Kamel was obliged to work to support himself while studying, and taught drawing at a Preparatory Secondary School. Given this difficult financial situation, that faced some of his students, Paolo Forcella asked for a small monthly subsidy to help them.

In 1911, the graduated students held their first exhibition at the Automobile Club in Cairo, presenting their works including paintings, sculptures, and architectural designs. And in that same year, Forcella wrote about Youssef Kamel in his Rapporto sulla Scuola Egiziana di Belle Arti (Report on the Egyptian School of Fine Arts), saying: ‘Très intelligent et éduqué. Il fera un excellent professeur’[1]. The Italian teacher also wanted to boost the career of some of very talented students like Kamel.

In 1925, he selected the three following students: Youssef Kamel, Ragheb Ayad (1892-1982), and Mohamed Hassan (1892-1961), to benefit from a scholarship delivered by the Ministry of Public Instruction, to complete their studies in Rome. There, Youssef Kamel trained under the Roman painter Umberto Coromaldi (1870-1948), and discovered the works of many Impressionist Italian artists including Domenico Morelli (1823-1901), and Giovanni Segantini (1858-1899). In 1929, Kamel returned to Egypt, where he was appointed teacher of painting at the École des Beaux-Arts in Cairo. And when the institution was directed by Mohamed Naghi (1888-1956), Youssef Kamel became director of the department of painting. In 1956, he directed the École des Beaux-Arts in Cairo.

The Cairo-based French engineer Paul-Alfred Fils was an important art collector in the beginning of the 20th century, and manifested a passion for Youssef Kamel’s art. And when he talked about it to the famous Egyptian feminist leader Hoda Shaarawi (1879-1947), she immediately went to buy some works of Kamel[2].

The study of Youssef Kamel’s oeuvre is often related to some art movements, such as Orientalism, and Impressionism, which emerged in the 19th century in Europe. His interest first developed when he was studying at the École des Beaux-Arts in Cairo, especially thanks to the curriculum, that he received. As a matter of fact, Paolo Forcella mainly painted orientalist works, illustrating Egyptian belly dancers, views over the arid desert, and mosques. And when Forcella taught at the École des Beaux-Arts in Cairo; he introduced Youssef Kamel to easel oil painting, as well as European artistic genres like portrait, nude, and landscape[3]. This teaching specifically corresponded to the aspirations of the institution to familiarize the students to the European art, and culture – which were considered to be superior, and to somehow make them adopt it. Besides, European art, and especially Impressionism, was truly appreciated by the Egyptian westernized elite, which considered this movement to be elegant, and aesthetic[4]. Nevertheless, because he was not off well financially, he couldn’t travel to Europe, and more precisely to Italy as much as he wanted. From 1923 to 1924, he made an agreement with his colleague Ragheb Ayad (1892-1982), which consisted in alternately taking the responsibilities of one’s courses, while the other one would travel to Italy. Yet, when he was in Italy on a scholarship, Kamel used to paint from works, that he saw in museums, and liked to paint some vedute, or ‘views’, illustrating a large-scale view over a city, or other places. It has been reported that Impressionism had a true impact on his oeuvre, as he adopted, and sharpened his own style through the knowledge, and the mastery of Impressionism technique, that he progressively acquired[5].

Youssef Kamel stated: ‘I was born with a tendency to Impressionism and this is how I will remain’[6]. Although he imposed this connection with Impressionism, the painter had always showed how he was attached to his Egyptian cultural identity, and land. In the beginning of his painter career, he rented an atelier in the district of Al-Qalaa, near by the Citadel of Saladin in Cairo. However, Kamel preferred to take inspiration from outdoors scenes, like the streets, houses, and market places. The popular environment of Egypt was an important source of inspiration, through which he reconnected to its people, and their lives. In the wok entitled Soleil d’Hiver (Winter Sun), and dated from 1938, Youssef Kamel depicted a daily life scene in the Egyptian countryside. In the background, the people are sitting against the wall of the houses, which appeared to be made of bricks, mud, and chaff – a typical Egyptian construction. The characters are wearing the traditional garments such as the white gallabiyah, and turbans covering their heads.  In the foreground, the scene is more dynamic, with some people looking busy with the daily tasks. Here, the Impressionist touch of the painter is highly visible. First, he used a rectangular format, to materialize the large space of the outdoor scene, that he might had witnessed. Secondly, he applied quick, and short brushstrokes on the canvas, in order to give an impression of spontaneity, and motion. Hence, he simplified the motifs, and the body features of the characters, giving the subject an unfinished aspect. Adhering to Impressionism, also included the seek for luminosity. From the district of Al-Qalaa, Kamel relocated to another one called El-Matareya in the north of Cairo. It was a wider and quiet area, where he could peacefully live, and admire the light, to elaborate his art. In the example of Soleil d’Hiver (Winter Sun), he captured the light of a winter sun, that he reflected on the juxtaposition of pure, and complementary colors like yellow, and red-violet. Through a vivid contrast, the viewer can feel the warm atmosphere of the present scene. Contrary to some of his Egyptian contemporaries like Mahmoud Said (1897-1964), Youssef Kamel preferred to focus on the instant, which caught his attention, and provided him emotions. And like all the Impressionist artists, the painting should render a visual, and colorful sensation, instead of faithfully representing the physical reality.

Part of the first generation of Egyptian professional artists, called al-Ruwwad (‘the Pioneers’), Youssef Kamel however never conducted, and established any art theories. He would see painting as means of artistic expression, through which he could combine feelings, with the richness of Egyptian social environment.

Youssef Kamel passed away in 1971.

The Egyptian Sate of Merit Award 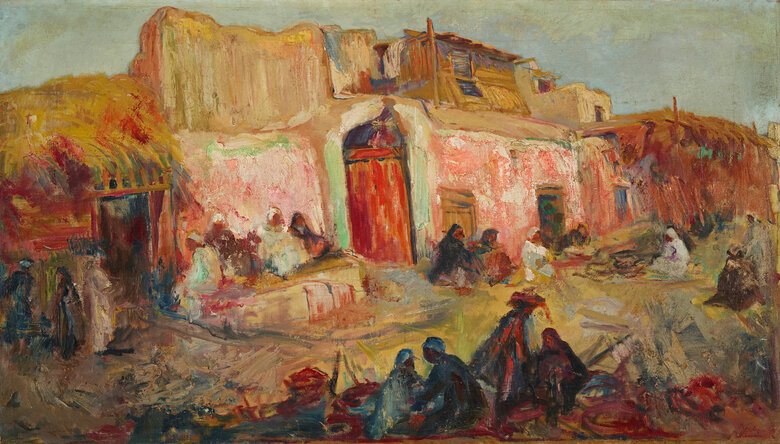 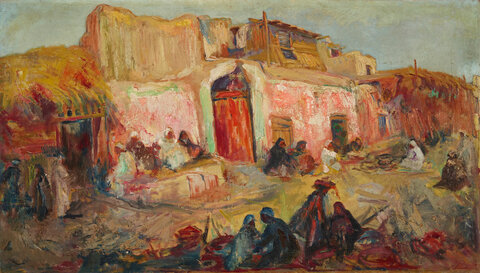