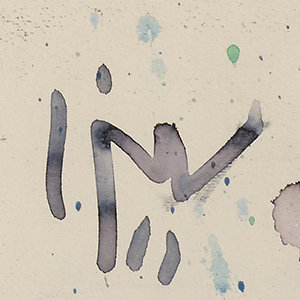 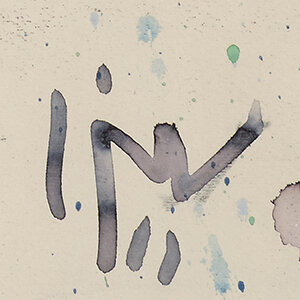 Painter and draughtswoman Lisa Fattah Al-Turk was born in 1941, at the height of the Second World War, to parents of German descent.  Fattah studied at the Accademia di Belle Arti in Rome, where she met her future husband, Iraqi artist Ismail Fattah. Upon her graduation in 1963, Lisa returned to Baghdad with Ismail, and ultimately spent the majority of her life there, developing her creative practice in symbiosis with her husband’s.  As a staple in the Baghdad arts scene, Fattah came to be associated with Iraqi art despite her European origins, and much of her work responds to the conditions of life in Iraq. The artist later continued her higher education at the Real Academia de Bellas Artes de San Fernando in Madrid, which is now a museum and gallery space.

As involved as she was with her husband’s work, and the several movements in which he took part, Lisa Fattah maintained her own distinct style and subject matter. Her work was at once removed from and in dialogue with the Iraqi discourse around modernism and visual heritage that so preoccupied Ismail and his peers. Though her work shows expressionist tendencies that were atypical for Iraq at the time, and she worked mainly in figurative art, her oeuvre has seen the inclusion of small Iraqi cultural signifiers, such as the artist’s signing of her name in Arabic, or the appearance of several women wearing hijab. Her painting Aggression (1990) appeared in the 2002 exhibition Breaking the Veils: Women Artists from the Islamic World.

In her paintings, the artist tackles people: their bodies, the places and they occupy, and the objects they use, as well as the complexity of human expression. Anatomy often appears twisted or distorted in Fattah’s work, which can be read as an embodiment of complicated social and emotional utterances; Fattah takes fragments of the inner human experience and places them outside. For example, the acrylic painting Action Change Chance (1989) presents the viewer with a deformed pink figure whose entire upper body is just a human head with two arms attached to it. The aforementioned Aggression (1990) is an expressionist articulation of the anger Fattah felt towards much of the violence taking place in Iraq at the time. A sort of sequel to Action Change Chance (1989), the colorful creation depicts a body splayed on its back as if having slipped and fallen. Painted in capital letters above this body is the word ‘AGGRESSION.’ Though skilled in her evocation of human feeling, the artist relies on a language of brushstrokes and bodily contortion to convey emotion; facial expressions are untrustworthy in her portraiture, where one can hardly discern the facial features of her subjects. In an untitled oil portrait from 1988, for example, Fattah paints a subject whose eyes and nose are so murky and poorly defined that they are almost completely absorbed into the coloration of the rest of the face.

In keeping with her emphasis on the body in all of its forms and environments, part of Fattah’s oeuvre is concerned with domestic life. In an untitled work part of DAF collection, dated 1986 and featuring a seated woman surrounded by a green background, Lisa offers the viewer a household enlivened by the surreal: one room dissolves into another as a woman moves between them, her hijab awkwardly framing her misshapen face. Fattah’s focus on the “body” of the domestic extends to furniture, which assumes a life of its own in these compositions. In the piece mentioned above, for example, the stove is a fiery and prominent body, commanding the viewer’s attention. In many other works, chairs, tables, and other items of interior decor further articulate the tenor of the painter’s human subjects.

Lisa Fattah died at the age of fifty-one in 1992, survived by her husband Ismail, and their four children.

Breaking Veils: woman artists from the Islamic world, traveling exhibition is organized by the Royal Society of Fine Arts in Jordan and the Pan-Mediterranean Women Artists Network F.A.M (Femme-Art-Méditerranée) based in Greece

Art of the Middle East. Modern and Contemporary Art of the Arab World and Iran