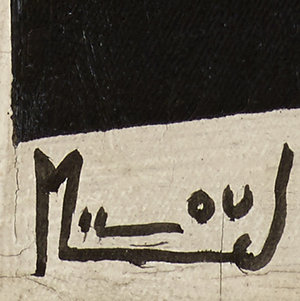 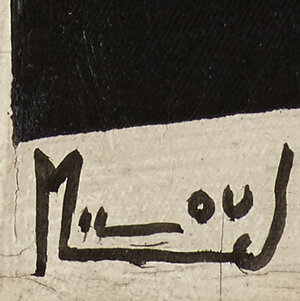 Born in the city of El Kelaades Sraghna in the Marrakesh-Safi region in 1939, Miloud Labied moved with his family to Salé in 1945, where he began his career with some odd jobs. Whereas his mother, Radia Bent Lhoussine, had already started painting in the 1950s, Labied attended painting, and drawing courses from 1958 to 1962, at the atelier of the Ministry of Youth and Sports, headed by the French artist Jacqueline Brodskis (1912-2006), established in Morocco since 1938. More than a decade later, Labied traveled to France, where he studied for one year at the École Nationale des Beaux-Arts in Paris in 1974. He would come back to France for six months, during which he resided at the Cité Internationale des Arts in Paris in 1999. While dedicating his entire life to art, Miloud Labied established the Fondation des Arts Graphiques in 2004. Located in Assif el Mal, in the south-west of Marrakesh, this art institution provided the artists an exhibition space, as well as residency.

In the 1940s, art activity in Morocco was practiced mainly as a hobby by European residents, who would produce Orientalist paintings. This colonial artistic approach was then adopted by local self-taught painters such as Tayeb Lahlou (1919-1972), while some of them chose to move towards naive art[1] until the end of the 1950s. Miloud Labied belongs to this generation of Moroccan artists, who didn’t follow a formal art education. However, he had always been attracted to painting, which was an important means of expression to him. The first stage of Labied’s oeuvre is characteristic of the naive movement, which consisted in depicting subjects through a simple, childlike style. In the 1960s, he produced paintings depicting anonymous people, or the portrait of his mother, through a palette of warm colors, and paying attention to details.

After the independence of Morocco from French protectorate in 1956, modern European trends appeared in the country, through the establishment of art schools including the École des Beaux-Arts in Tetouan – formerly part of the Spanish protectorate, and the École des Beaux-Arts in Casablanca. The students were also able to travel to Europe, where they completed their studies by the end of the 1950s, and consequently became professional in their field. Back to Morocco, they would pave the ground of the modern local art movement, delving into their rich cultural, and artistic heritage. This dynamic intensified when the group of artists from the École des Beaux-Arts in Casablanca formed, and which included Mohamed Melehi (1936-2020), Farid Belkahia (1934-2014), Mohamed Chebaa (1935-2013). It is important to remember that these artists employed the term of ‘naive art’ to define an art production, which was not related to established theories[2]. Yet, Miloud Labied never made this judgment on naive art, considering that art, in general, shouldn’t be related to theoretical discourses.

Miloud Labied was an accomplished painter, but also produced some sculptures, and photographs, with a total of 4000 negatives. Labied photographed the portraits of his contemporaries, including intellectuals, as well as artists. In this series of negatives, appear also the photographs of cats, and dolls, that he particularly liked[3].

Miloud Labied is considered to be a great figure of the modern art movement in Morocco in the 20th century, close to the Moroccan public. In 1978, he participated in the First International Cultural exhibition Musim in the city of Asilah, stating: ‘For the first time, I take out my own particular tools, and my own particular habits (…), which makes this event a collaborative one between the public and myself’[4]. However, Labied never committed to a specific group of artists, and somehow contributed to the modern art movement, by separately working on his own style. As of the 1970s, the oeuvre of Labied manifested a big shift from figuration to abstraction, but the painter didn’t aim to integrate any references to his cultural identity in his artworks. Labied was proud of his roots, and his country, but never felt it necessary to expose this pride through his art as he stated: ‘Elle [ma peinture] doit trouver sa voie en tant qu’oeuvre picturale et non pas en tant qu’oeuvre réalisée par un peintre marocain’[5]. In the Dalloul Art Foundation’s collection, two pieces called Composition, from the early and the late 1970s, reveal the experimentation of Labied towards abstraction. Applying unrefined, and flat colors, the artist filled the space of the canvas with geometric patterns like circles, as well as squares. He assembled these patterns with each other like a construction, playing with straight, and curved lines. Seen in these two paintings, and in the vast majority of his works, the blue color is omnipresent. Labied applied shades of blue, making it either dark or light, and associating it with its complementary orange color.

Another particularity of Miloud Labied’s oeuvre, seen in the two works Composition, is the circular movement. This obsession for circles stemmed from some anecdotes from his childhood with his family, remembering when he accidently saw the private parts of his father. He also recalled the moment, when he attended a gathering of women, and saw his aunt running away. Labied followed her, and saw her wiping off with a blood-stained tissue – she was menstruating[6]. Since then, he understood that this interest in circles are autobiographic; and using them led him to create dynamic compositions, which somehow connect his paintings to the human body. Painting is a sensitive activity, and Miloud Labied demonstrated his tendency to lyrical abstraction, which is related to the direct emotional expression of the artist.

Miloud Labied preferred to make art, which corresponded to his own personality, and freedom. He didn’t even hesitate to stop painting for a while, when he felt that his work was being too repetitive. Passing through different stylistic stages, Labied eventually adopted abstraction to celebrate what he was convinced that art was: life.

Miloud Labied passed away in 2008.

[5] ‘My painting has to find its way as a pictorial work and not as a work executed by a Moroccan painter’. Interview with Miloud Labied in “Miloud Labied, Tout Sur Ma Peinture.” Aujourdhui Le Maroc, 2003. https://aujourdhui.ma/culture/miloud-labied-tout-sur-ma-peinture-27333.