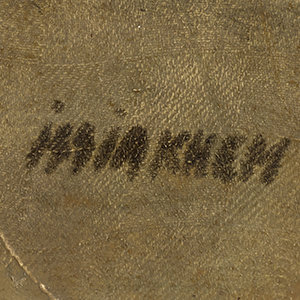 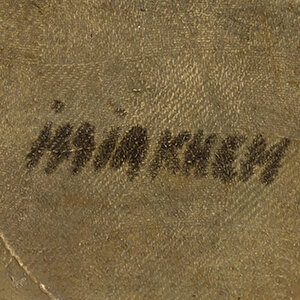 Born preterm in 1928 in a small village called Taboudoucht in the Kabylia region, Mohamed Issiakhem moved to Relizane with his father in 1931, who sought to find a better future for his family. During the WWII, Algeria served as a rear base for Free France against the occupation of Nazi Germany. In Relizane, a school had been transformed into a military camp, where kids were playing. On July 27th, 1943, the young Issiakhem grabbed a grenade from a crate, which exploded in his hands, resulting in the death of his sisters Saïda, and Yasmine, and his nephew Tarik. This tragic accident had a strong impact on the relationship between Mohamed Issiakhem, and his mother to the extent that he had to leave the family house. As a matter of fact, in Kabylia family culture, women pass on knowledge to their daughters, and prepare their sons to follow the path of their fathers[1]. Since Issiakhem got his arm amputated, he couldn’t fulfill the expectations of the mother.

In 1947, Mohamed Issiakhem consequently took the train to go to Algiers, where he stumbled upon the plaque of the Société des Beaux-Arts, while having a walk in the Place Bugeaud, now the Place de l’Émir Abdelkader. The Société des Beaux-Arts was founded in 1851 by Laurent Laperlier (1805-1878), and provided courses of drawing, and painting for free. Issiakhem started his training there. After 1945, the Algerian artists – called ‘indigenous’ – officially got the status of ‘Muslim French’, which allowed them to register at the École des Beaux-Arts in Algiers. Four years after this administrative change, Mohamed Issiakhem enrolled in the establishment, and studied under the supervision of the Algerian artist Mohammed Racim (1896-1975). The latter taught the student traditional arts, such as the miniatures, and Western academic painting. Issiakhem also attended courses of Art History, provided by the French art historian Jean Alazard (1887-1960); and engraving classes with Jean-Eugène Bersier (1895-1978). The curriculum was very rich, and complete as it included landscape painting, the study of anatomy, painting, and drawing from live models, and feminine nudes. From 1944 to 1947, France established new rules, which reformed the status of Muslim Algerian people, enabling them to circulate more easily between their country, and continental France[2]. Since then, many Algerian artists were able to emigrate, and escape from the hard conditions of living in their homeland.

In 1953, Mohamed Issiakhem traveled to France, where he completed his education at the École Nationale Supérieure des Beaux-Arts in Paris for free, because he was physically handicapped. In 1959, he left France for the German Democratic Republic, where he briefly resided in Leipzig, and had a solo exhibition at Galerie Donilstraz. In 1962, he joined the Algerian writer, and friend Kateb Yacine (1929-1989), with whom he went back to Algeria. There, he became an illustrator for the daily newspaper called Alger Républicain until 1964. While painting, Issiakhem never stop working as an illustrator, and he is especially known to have illustrated the Algerian banknotes, and stamps from 1965 to 1982. He also worked in education, being appointed as a teacher at the École des Beaux-Arts in Algiers, prior to moving to Oran, where he directed the École des Beaux-Arts. In 1971, Issiakhem became teacher of graphic art at the École Polytechnique d’Architecture et d’Urbanisme in Algiers.

In the 1970s, Mohamed Issiakhem produced works, whose the palette of colors was gray, and white. This was called the ‘white period’ of the artist. As a matter of fact, Issiakhem faced a shortage of paint tubes, and consequently used house paint from Société Nationale des Industries Chimiques, while waiting for his friends to bring him paint tubes from France[3].

Since the invasion of Algiers in 1830 by the French troops, art was put to the service of the colonialist process in the sense that it showed the cultural superiority of France. A superiority, and a refinement, that the École des Beaux-Arts in Algiers, created in 1920 by the French government, highly promoted, through its courses on Orientalist, and neo-classical movements. In France, Mohamed Issiakhem progressively detached himself from the academic teaching, that he received at the École Nationale Supérieure des Beaux-Arts in Paris, thinking that he had already learned everything in Algeria[4]. In the 1950s, he moved towards abstract art, that he discovered in the French capital city, through the artworks of Jean Dubuffet (1901-1985), and art brut. Against a backdrop of a political crisis, leading to the Algeria war in 1954; the Algerian artists in France, including Mohammed Khadda (1930-1991), and Abdallah Benanteur (1931-2017), started their reflections, and experimentations on the foundation of modern Algerian art. In his program, Mohamed Issiakhem insisted on the fact that the indigenous artist lent themselves to a wide range of artistic influences, according to the rich artistic, and cultural past of Algeria, and this would form his authenticity. He wrote: ‘From works of Berber craftmanship steeped in the myriad currents of the ancient African world to the most recent figurative or abstract paintings, we are living the history of multiple influences: Carthaginian, Roman, Byzantine, Arab, and French’[5]. Hence, this historical factor would help Algerian artists to free themselves from the colonial hold, which had conditioned them since the beginning of their careers. To Issiakhem, the Algerian artist had to be free in his creation, and simultaneously respond to the social aspirations of his people.

Throughout his artistic journey, Mohamed Issiakhem demonstrated his mastery in working on the diverse genres of painting, and styles. However, he specifically affirmed himself as an accomplished portraitist, who aimed to convey the personality of the sitter, rather than the physical appearance. Part of the Dalloul Art Foundation’s collection, a series of paintings manifests the talent of the artist, who captured the portraits of different figures, through a remarkable abstract technique. In this series, he produced the portraits of anonymous people, employing abstracted forms, countered with thick black brushstrokes, and applying a palette of earthy colors such as in Cette Oblique (1983). On the other hand, he also portrayed more identifiable people seen in the two non-dated works entitled, Homme, and Femme. Using ink, and pencil, Issiakhem produced a very dynamic drawing, with straight, and thin lines. He respectively used the blue color for the man’s portrait, while he applied the red color for the woman’s portrait. With a frontal view, and a lack of perspective, he depicted a man, and a woman, who both stare at the spectator with deep eyes. They both seem to belong to the traditional Algerian society, as indicated by their garments. The man wears the djellaba with the burnous, a traditional wool coat, and a turban; whereas the woman is wearing a long veil with a dress, and some jewelry around her neck. In his paintings, Mohamed Issiakhem always showed his interest in illustrating ordinary people – especially women[6], workers, etc. He wanted to render their personal emotions, and faithfully interpret their lives. In the artistic tradition, the genre of portrait was originally reserved for the representation of important people, from the social elite, and the aristocracy. Here, by portraying two normal people, standing straight, and proud; Issiakhem reconsidered their social status, and elevated their images in order to place them in the history of modern Algeria.

Mohamed Issiakhem is part of this generations of artists, who lived the historical transition of Algeria, from the French occupation to the independent country. His artworks revealed the experimental move, through which Algerian modern art established in the 1950s. But, even in this particular political context, Issiakhem never chose propaganda in favor of the independent movement. He preferred to focus on the human being, and revealed his suffering, misery, and sadness, as the illustration of a social reality.

Mohamed Issiakhem passed away in 1985.

Yesterday is tomorrow's memory: a group show of work from North Africa