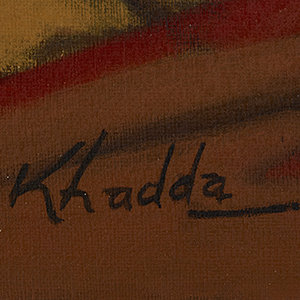 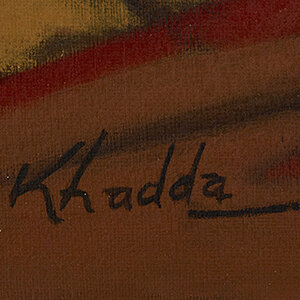 Born in 1930 in the coastal city of Mostaganem, Algeria, Mohammed Khadda came from an underprivileged family, when the country was a French territory. In 1942, he had to interrupt his education, to move with his family to Tiaret because of the famine occurring in his hometown. After a few months, he came back to Mostaganem, and completed his education. He received a primary school certificate in 1944, but was not able to pursue his studies, because he had to work to support his family. In that same year, he was hired in a print shop in the city of Aïn Séfra, and took drawing courses thanks to his employer, who appreciated his personality. Khadda would eventually work as pattern maker, while painting at night and on Sundays. In 1947, he encountered the Algerian painter Abdallah Benanteur (1931-2017), with whom he used to go to the countryside of Mostaganem and painted  the scenery. In 1948, the two visited a friend, who was hospitalized in the sanatorium located in Miftah, formerly Rivet. This was the occasion for Mohammed Khadda to visit the Musée des Beaux-Arts in Algiers, where he discovered various paintings executed by great French artists such as Eugène Delacroix (1798-1863), and Théodore Chassériau (1819-1856). Since then, he decided to become a painter. In 1953, Khadda, and Benanteur went to France, where they both settled in Paris. In the French capital city, Khadda attended evening drawing classes at the Académie de la Grande Chaumière in the lively neighborhood of Montparnasse. He also worked as a pattern maker, and typographer in different print shops, while enriching himself by visiting museum and art galleries.

The 1950s corresponded to the decade, when France, and Algeria shared the darker side of their common history. In 1954, the movement of the Front de Libération Nationale (National Liberation Front) started leading armed activities against France, fighting for the independence of Algeria[1]. Mohammed Khadda spent the whole time of the Algeria war in France, until his home country became independent in 1962. In Paris, he frequented the intellectual Algerian circle, and joined the independentist Algerian movement, which gathered figures like Mustapha Kaid (1921-2009), the comedian Mustapha Kateb (1920-1989), as well as the writer Kateb Yacine (1929-1989). Khadda politically committed in favor of the independence of Algeria, and adhered to the French communist party in 1953. Ten years later, Mohammed Khadda returned to Algeria, where he settled in Blida, and worked as a printer before relocating to Algiers, where he worked as a pattern maker, and editorial secretary for several reviews. In 1964, he became member of the Union Nationale des Arts Plastiques (The National Union of Plastic Arts) founded in 1963, under the patronage of the Ministry of Culture and Information, and the Front de Libération Nationale (National Liberation Front). In 1972, he resigned from his printing job, and dedicated the rest of his life to painting. Since then, the contribution of Mohammed Khadda in the cultural politics of Algeria was considerable. He was appointed as advisor to the Ministry of Culture’s graphic arts sector in 1979, and became a member of the Conseil National de la Culture (National Council of Culture) in 1990.

When Mohammed Khadda joined to the French communist party, he registered as ‘Mohammed Lajdel’, which was the last name of his father. ‘Benkhedda’ was actually the name of his family’s tribe, which the French administration simplified into ‘Khadda’.[2]

Right after the invasion of Algiers in 1830 by French troops, numerous French artists went to Algeria, where they produced paintings related to the country’s local traditions, and landscape mainly through an orientalist approach[3]. Algeria was a terrain of artistic creation, and experimentation for foreign academic artists, who were rejecting modern art movements occurring in Europe. In 1920, the École des Beaux-Arts in Algiers was opened by the French government, and the first generations of students enrolling at the establishment studied the styles from Orientalism, and neo-classical movements. Provided by teachers coming from France, the teaching of European artistic trends was also inherent by the colonial French process in the sense that these trends were not introduced, but imposed on the local students during the 1930s, and 1940s[4].

In the 1950s, most of the students in the École des Beaux-Arts in Algiers traveled to France, where they completed their studies at the École des Beaux-Arts in Paris. It is important to note that Mohammed Khadda didn’t receive any art education, and was consequently a self-taught artist. When he arrived in Paris, he discovered the impressive dynamic of the city, which was a cosmopolitan, artistic, and cultural hub in Europe. He would familiarize himself with the modern art movements, including abstraction, through the works of Nicolas de Staël (1914-1955), and Vladimir Kandinsky (1866-1944). Yet, Khadda was also exposed to the non-European arts, like African sculptures, as well as Chinese, and Japanese ink works[5]. Most importantly, it was also in France, where he saw the rich heritage of Islamic arts, especially the calligraphy, and illustrated Arab miniatures, when he spent some time at the Bibliothèque Nationale[6]. The experience of Khadda, and his Algerian compatriots in Paris, was fundamental in the birth of the artistic modernity in Algeria. Mohamed Issiakhem (1928-1985) recalled: ‘Finally, after World War II, some young artists emerged – [Mohamed] Louail, [Mohammed] Bouzid, [Abdallah] Benanteur, [Mohamed] Khadda, [?] Kessous – split between the lives they lived in European milieus and the masses of popular inspiration from which they originated. Strongly influenced by contemporary artistic movements, they attempted to meld their own ideas with the tendencies of the European avant-garde’[7].

In the very beginning of his career, Mohammed Khadda briefly worked on figurative art. Yet, back to Algeria in 1963, he furthered his research, and reflections on paving the way of the Algerian modern art movement, through his pictorial work, as well as his important writing oeuvre. In 1966, he published Éléments pour un Art Nouveau (Elements for a New Art), where he presented his theories, and aspirations, which aimed to deconstruct the colonial idea of making art in Algeria. He especially insisted on the notion to re-appropriate the cultural, and artistic heritage of the country, and its people, that he would find in abstraction. Part of the Dalloul Art Foundation’s collection, a series of paintings dated from the late 1980s, demonstrate the essence of Mohammed Khadda’s oeuvre, and his stylistic shift towards abstract art. For this series, he applied pure colors such as bright red, and blue, that he superimposed with each other. He also played on the tones, through which he conveyed the luminosity out of the canvas. Khadda completely abandoned figurative art because abstraction was also linked to the artistic tradition in Algeria, in Islamic and Pre-Islamic culture, as he stated: ‘There are so many of our culture’s treasures that must be brought to light, from the enigmatic Tassili frescoes to the humble murals of the Ouadhias tribe’[8]. The Tassili frescoes, dated from the Neolithic age, and located in the south of Oran, were discovered in 1932. In the background of the painting Les Remparts de Koufa (1989), part of the Dalloul Art Foundation’s, Khadda drew geometric motifs with straight lines, recalling the aesthetic, and style of the mural paintings from the ancient cultures of North Africa.

Alluding to the pre-Islamic culture, and time, Khadda delved into the local history in order to affirm the legitimacy of modern Algerian art, within the international modern art trends. Another element of his oeuvre is the letter.  Belonging to the rich cultural Arab-Islamic heritage, the Arabic script has always been a source of inspiration to modern, and contemporary Arab artists. They even established an experimental approach, and work on it called hurufiyah – an art, which ‘dealt [deal] with the Arabic language, letters or text, as visual element for composing’[9]. Mohammed Khadda also conducted research, and experimented with the Arabic letter, as seen in the work entitled Palimpseste (1988), also part of the Dalloul Art Foundation’s collection. Here, he effectively integrated the Arabic letters, with thick black brushstrokes, in the middle of the painting. He played on the different types, and forms of the lines, combining the curved (muqawwar), the round (mudawwar), the elongated (mabsut), and the straight (mustaqim)[10]. Yet, he didn’t render any specific literal meaning – the letters are not even properly connected with each other to form a sentence, or a word. He blurred the vision of the spectator, and the script is impossible to detect. Khadda preferred to exhume the sensations, that the letters visually produce. In fact, the painter treated the letter as a sign, on which he stressed the aesthetic, and the strength of the form, that symbolizes the freedom of his artistic process.

Nicknamed ‘peintre du signe’[11] by the French Poet Jean Sénac (1926-1973), Mohammed Khadda paved the way of the modern Algerian art movement. However, he never neglected the importance of European avant-garde movements from the first decades of the 20th century, nor strictly created political artworks. He preferred to propose another vision, and approach to Algerian painting, qualified as ‘indigenous’, which would express individual emotions rather than reproducing objects. Tracing Algeria’s past heritage, and reviving it in a modern plastic treatment, led Khadda to free Algerian art production from colonial conventions, applied for more than a century of French occupation.

Mohammed Khadda passed away in 1991.

[11] ‘The sign painter’. Expression used by Jean Sénac in the preface of the exhibition ‘Khadda’, at the Galerie L’Oeil Ecoute, in Lyon (France) in 1964.

Yesterday is tomorrow's memory: a group show of work from North Africa 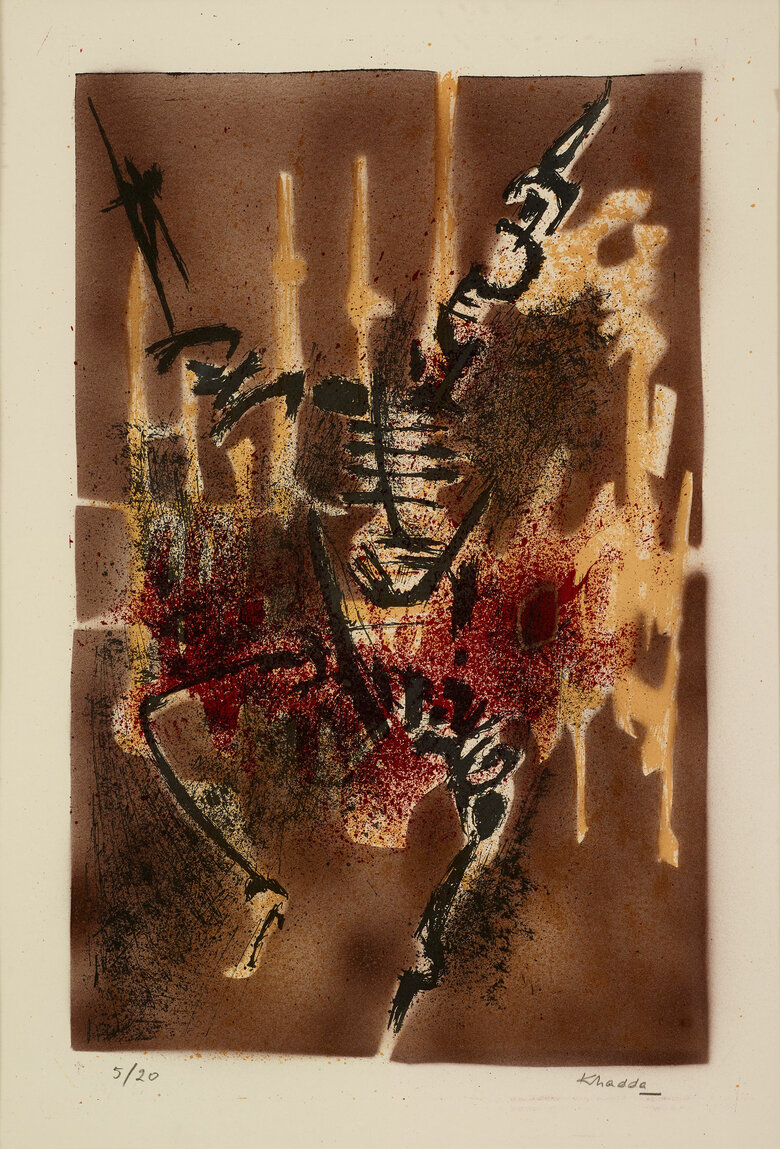 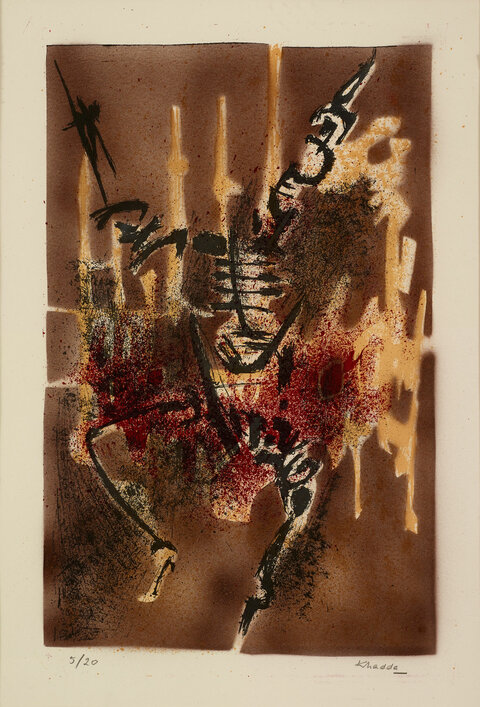 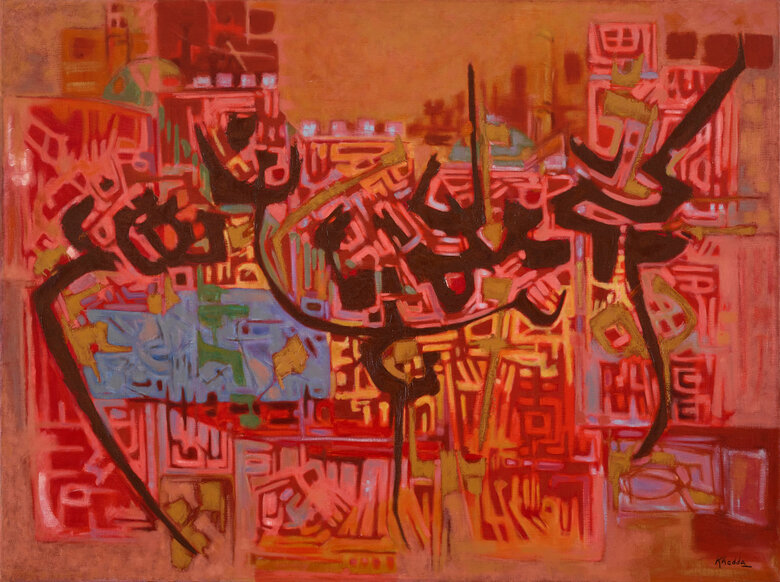 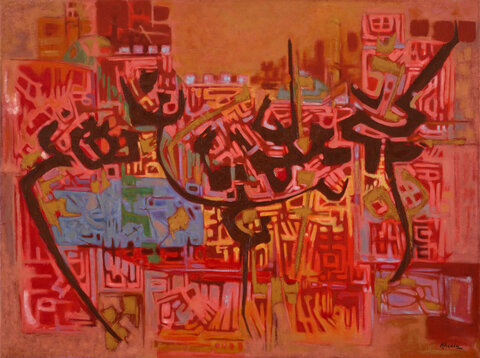 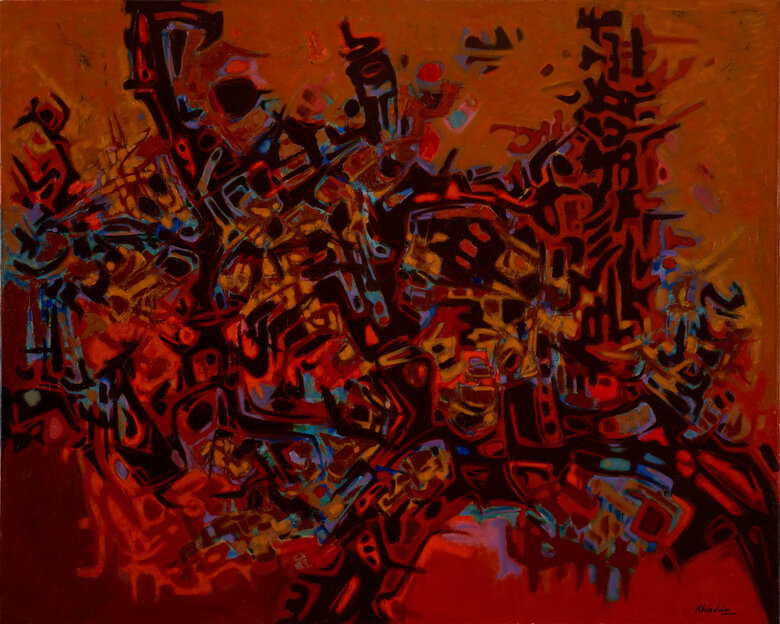 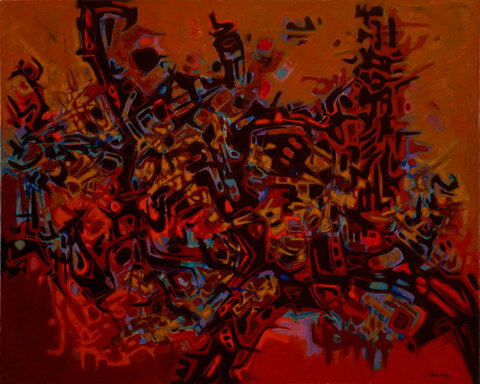 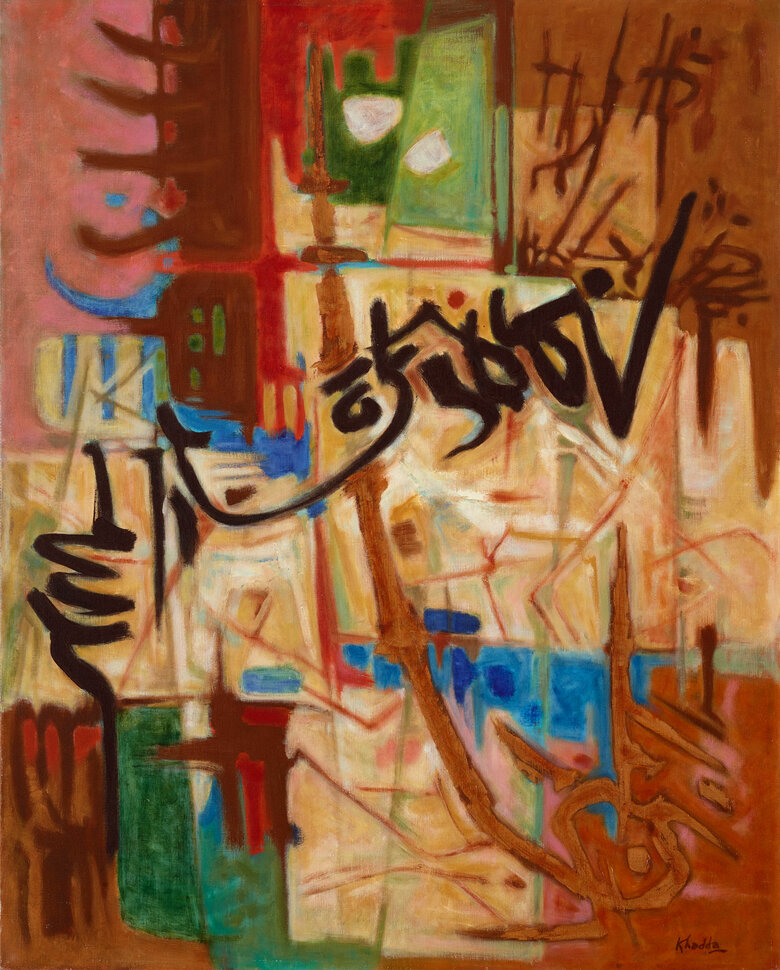 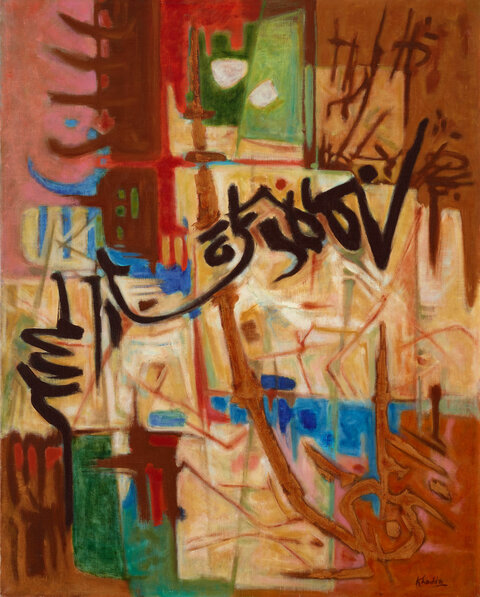 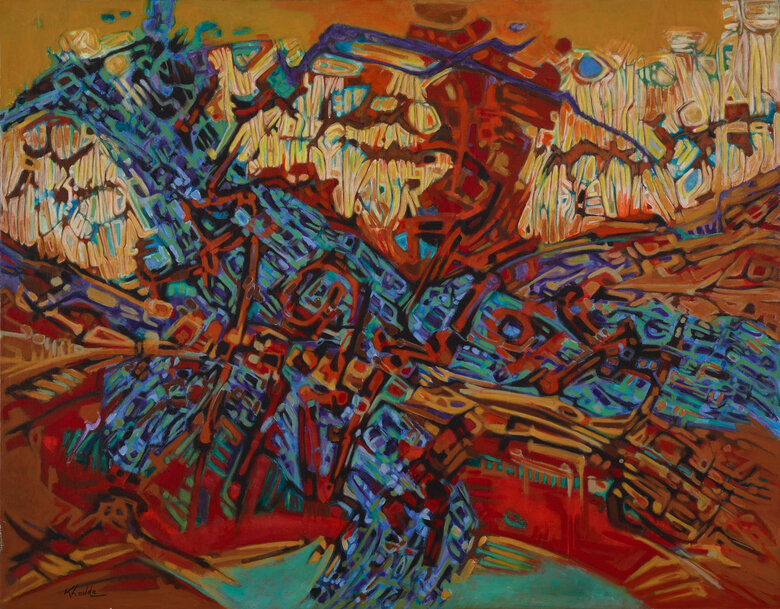 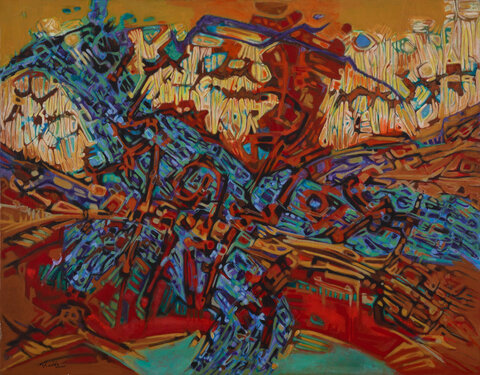 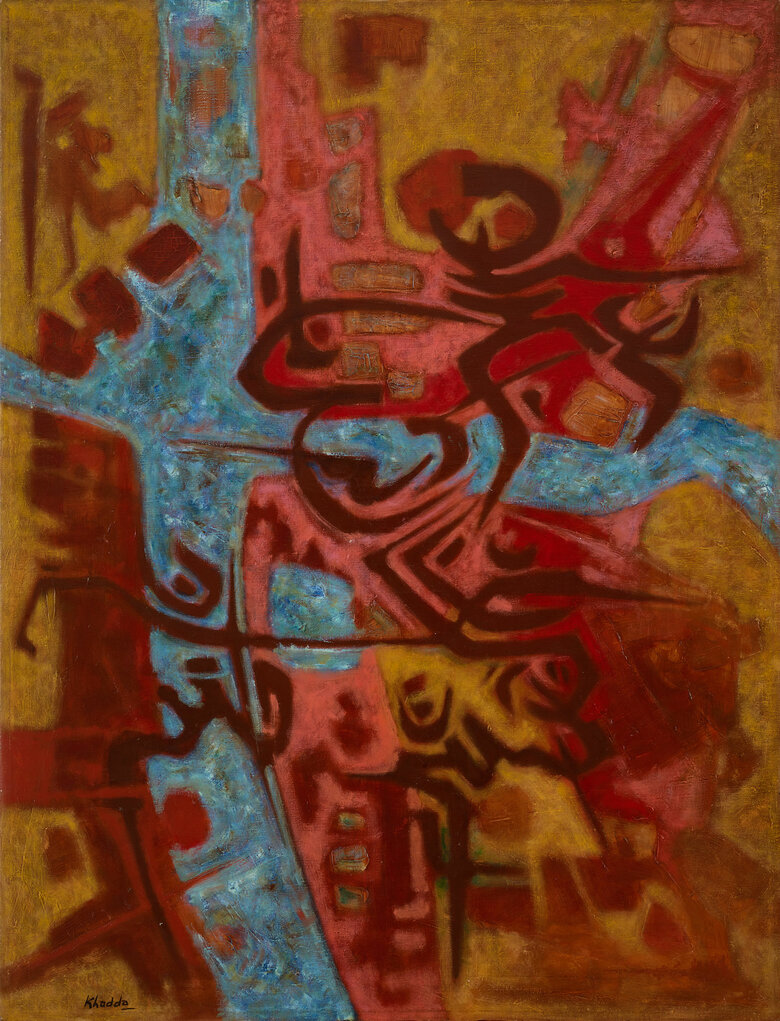 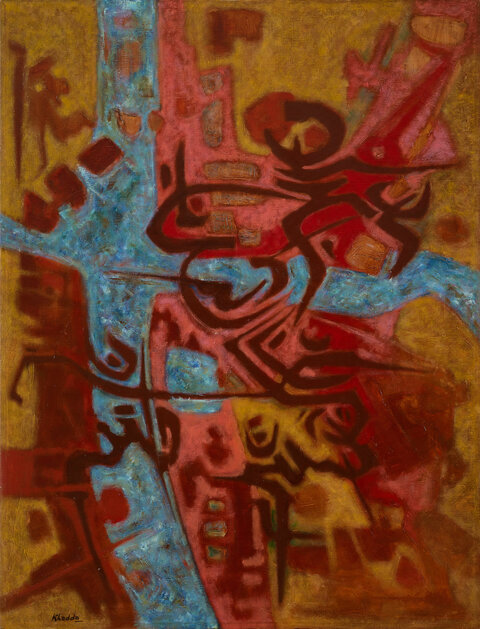