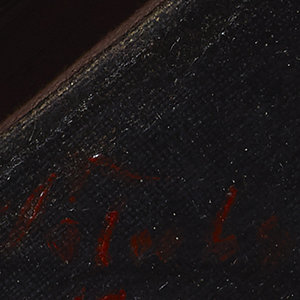 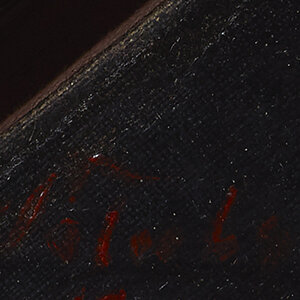 Khalil Saleeby was born in 1870 in Btalloun, a village in the Aley District of Mount Lebanon. The son of landowning Greek Orthodox peasants, he began drawing as a child, at first using matchstick heads as “pencils” before progressing to charcoal and ink.

A teenage Saleeby left his village for Beirut in 1881 to study at Protestant missionary schools, and in 1886 enrolled at the Syrian Protestant College (later the American University of Beirut). Saleeby excelled and impressed his professors in this foundational phase. With their support, he moved to Edinburgh in 1890 to study with John Singer Sargent (1856-1925), an American expatriate artist and master portraitist. Sargent encouraged Saleeby to continue his education in Philadelphia, where the young artist met and soon married the American Carrie Aude, his lifelong lover, and muse. After Saleeby exhibited in Chicago, the newlyweds lived in Edinburgh, Paris, and London before settling in Beirut in 1900.

Saleeby’s training and general time abroad heavily influenced his painting style. While in Paris, he trained under the symbolist painter Pierre Puvis de Chavannes. He also met Auguste Renoir (1841-1919), one of the few Impressionists invested in portraiture, and drew inspiration from his work as well. Though Renoir made portraits to fund his Impressionist experiments, Saleeby defined his practice by merging the genres. He broke from formal parameters in service to his own interiority, the basis of a profoundly personal aesthetic witnessed in Portrait of Carrie Aude (1916), which shows the artist’s wife against a backdrop of thick red, green, yellow and turquoise accents. Aude’s portrait is exceptional for its raised brushstrokes and reflection of dynamic, multicolored light across her blushed face and white collar.

Saleeby extended this technique to his collection of nude figure paintings, which challenged deeply entrenched cultural beliefs in their insistence on the artistic merit of the naked body. Though it may seem to the contemporary viewer that Saleeby was practicing his trade, these images caused controversy in Lebanon and the surrounding region, ultimately pushing cultural as well as artistic norms past their limits. More than mere experimentation, his Impressionist technique lent his portraiture and figure paintings a layer of emotional realism, breathing new life into otherwise static genres. Saleeby’s work exemplifies how personal relations can be represented in asocial portraiture; there is palpable emotional weight in his depiction of humans, especially his beloved wife. Saleeby also excelled in painting other subjects, perhaps most seen in Heliopolis Palace, Cairo (1914), which he framed from an unusual corner vantage point.

Upon returning to Beirut, Saleeby opened an atelier on Bliss Street, adjacent to his alma mater. There, he taught the likes of César Gemayel and Omar Onsi, both of whom would become canonical figures in the history of modern Lebanese art. Saleeby and Aude lived in a house in Beirut’s Al Kantari district and built a second home in his native Btalloun. Their lives ended tragically in 1928 at the hands of a gang of village men responding to a conflict over rights to a water source. Saleeby’s thriving legacy has established him as a seminal figure of Arab art and a foundational Lebanese modernist.

The Fold Medal of Edinburgh Salon for his Venus de Milo

A Time of Gifts