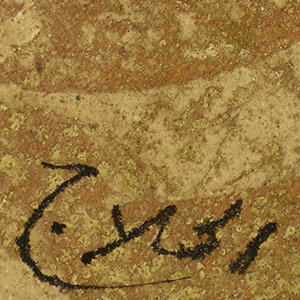 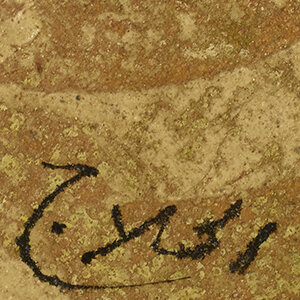 Mustafa El Hallaj was born in the village of Salama, near Jaffa, Palestine, in 1938. He came from a humble background; his father was a migrant farmworker, and some of his earliest memories were of traveling with him from orchard to orchard throughout the fertile agricultural regions of Palestine. When he was nine years old, El Hallaj and his family fled Zionist violence on foot, ultimately settling in Egypt, where the artist would complete all of his training. In 1963, he graduated in sculpture from the fine arts faculty of Cairo, and in 1968 he completed graduate training in Luxor. El Hallaj left Egypt in the early 1970s, living between Beirut and Damascus until 1983, when he permanently settled in the latter city.

Although El Hallaj spent most of his adult life outside of Egypt, his adopted homeland had a significant impact on his work. He considered himself “more Egyptian than many Egyptians,” and recognized the clay of the Nile, with which he played when a child, as his first artistic medium. His affinity for Egypt did not preclude his Palestinian pride, however, and he was an active participant in the cultural wings of the Palestinian Liberation Organization in Beirut and Damascus. Indeed, much of his best-known work engages with the struggle for Palestinian self-sovereignty. He believed that it was the duty of the Palestinian artist to combat, through art, the “self-denial” and “suffocation of historical heritage” that the Israeli occupation imposes upon Palestinians.

El Hallaj did not have an official position in the PLO, despite the degree to which his art resonated with the aims and ideals of the organization. In evidence, the fact that Yasser Arafat himself traveled to Damascus in 1974 for the launch of his exhibition.

While he trained as a sculptor, Mustafa El Hallaj largely abandoned the practice in the late 1960s in favor of a more suitable medium for his itinerant lifestyle. As he finished his studies in Luxor, he began to shift his focus to the portable forms of engraving and woodcut printmaking, for which he is celebrated today. Most notable about this oeuvre is its overt engagement with mythology; the artist evokes the visual cultures and spiritual beliefs of former Near Eastern civilizations, such as the Canaanites and the ancient Egyptians, interpolating these forms with militaristic or erotic imagery. His prints are animated by a sense of accumulation, of the layering of partial references to historical, mythological, and contemporary cultures within a realm of hallucinatory fantasy.

Where much scholarship presents El Hallaj as a direct and deliberate storyteller, the artist’s emphasis on his subconscious suggests that his work is deeply personal and almost auto-generative. His interest in dreams and other phenomena of the human psyche aligns his work closely with that of European Surrealists such as Andre Breton and Salvador Dali, but one cannot assume a direct influence. El Hallaj himself was a vocal opponent of art history’s Eurocentricity, claiming in a 1975 interview with Izzeddine al-Munasira that he rejected Western currents in Arab artistic production, though he embraced Western techniques. Although his provocative compositions echo Surrealism in their fluid blend of fantasy and eroticism, as well as their focus on the subconscious mind, El Hallaj drew inspiration from his belief that the creation and enjoyment of art was a hugely personal endeavor. Indeed, he was known to leave his work untitled because he believed interpretive work to be the duty of the viewer and did not wish to direct his audience in any particular way.

Personal though they may be, El Hallaj’s prints are undeniably in touch with social concerns. Even his most dreamlike compositions include direct references to armed struggle and invite dialogue with the more didactic strains of social realism, which were popular among contemporaneous Palestinian artists such as Ismail Shammout. The tension between the personal and the political that animates El Hallaj’s work renders its iconography tenuous and unstable, refusing to allow any image to stand as a fixed symbol.

El Hallaj was known as a gregarious entertainer, beloved for his generosity, his skills in the kitchen, and his distinctive Egyptian accent. He hosted regular literary salons at his home in Damascus during the mid-1970s, and his innovative work garnered the respect of artists from all over the political spectrum. Like many Palestinian artists of his era, however, his career was also marked by hardships and tragedy. In 1982, the Israeli assault on Beirut destroyed approximately 2500 of his works, which was a devastating blow to the artist. In 2002, an electrical fire burned his gallery and studio to the ground; he successfully rescued much of his work from the flames but died in a determined attempt to save more. He is buried in the Yarmouk Refugee Camp, Damascus.

Made in Palestine, the Station Museum of Contemporary Art, Houston, USA

Self-Portrait as Man, God and the Devil