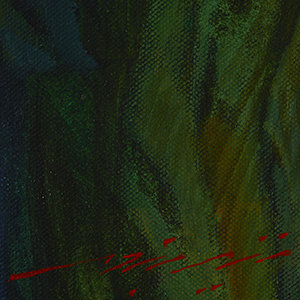 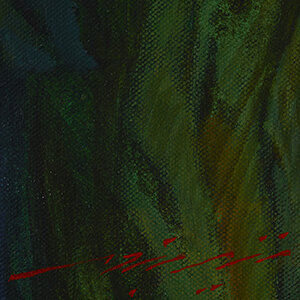 “The woman goes beyond her physical dimensions in my paintings, she turns into a symbol like a mother, a lover, a city and a homeland”
Nazir Nabaa[1]

Considered a pioneer of modern Arab art, Nazir Nabaa was a prominent and creative artist and educator in not just Syria but across the region. Born in 1938, Nabaa grew up in a simple, traditional Syrian family in Damascus, with his father a farmer amongst other professions and his mother an embroiderer. Nabaa would draw birds and plant motifs on the clothing his mother was working on, excited to add his imaginative additions to the designs: “I was very happy when a girl from my village wore that dress and I could see my drawings flying on her chest”.[2] He first made waves with his art as a young boy, participating in a competitive annual exhibition with a watercolour artwork at the age of fourteen following encouragement from his professor, Nazem al-Jaafari. Al-Jaafari was a prominent artist himself, and according to Nabaa, a strict teacher who taught him to respect the origins of many artforms, giving Nabaa a firm foundation at the beginning of his artistic career.[3] He graduated high school in 1959, and after winning a scholarship from the Ministry of Education, was sent to study at the Faculty of Fine Arts in Cairo.

In Cairo, Nabaa studied painting and was taught by some of the country’s finest artists including Hussein Bicar, Hamid Nada and Abdel Hadi Al-Gazzar, and his painting techniques matured a great deal in this period. Nabaa loved Cairo and Egyptian art, seeing it as a close second to his home, Damascus.[4] He graduated in 1964, but managed to find love before leaving town - Nabaa met and married Egyptian artist Shalabiya Ibrahim in Cairo, departing for Syria together in 1965.[5]

Once they arrived back, Nabaa began teaching painting in the city of Deir Ezzor in Syria’s northeast. Whilst teaching, he explored the area and its history, learning more and more about the Sumerian civilisation that once walked the same rugged landscapes. His art became more rebellious – both expressionist and impressionist – but also contemplative. The countryside gave him time and space to reflect on nature in all its intricate glory, and hunting trips with friends in the mountains gave him the opportunity to see a range of vast, beautiful views.[6] He then held his first solo exhibition in Damascus later in 1965, showing a range of work, much of which was inspired by the terrains of Deir Ezzor. This caused a jolt in the local art scene, presenting critics, artists and art lovers with what seemed like a new era in Syrian creative expression.[7]

In 1967, the Six Day War began and the region was engulfed with hope followed by sadness and rage. Pan-Arabist sentiments were strong in Syria, and support for the Palestinian cause was fierce. Nabaa painted a series of artworks following the war, confronting Israeli aggression and the horrors that took place. In 1970, Nabaa painted Bahr el Bakar, now in the Dalloul Collection, which depicts the aftermath of the bombing of a school in Egypt, which killed dozens of children. Painting a martyred heroine (also used in other paintings in the series), he depicts her bravely sheltering young schoolboys crouching in fear as the building collapses around them. Nabaa’s vivid, cubo-futurist approach creates a dark and expressive scene mournfully commemorating the horrific event, but also showing strength and resistance in the face of terror.[8] He spoke of the frustration everyone felt during these years, and how the symbol of the freedom fighter became a source of hope and comfort. This led to him using these symbols in his work, and especially in revolutionary, political posters he designed for the Palestine National Liberation Movement (Fatah) in the late 1960s and early 1970s. [9]

From 1971-1974, Nabaa studied in Paris at l’Ecole Nationale Superieure des Beaux-Arts, a period which “helped me to catch my breath and restore my balance”.[10] Following years of stress and instability in the late 1960s, Nabaa began reading more into mysticism while in Paris after meeting Ahmed Qassem, a young Egyptian who gave him a booklet with the text of a lecture his father, Dr Mahmoud Qasim, had given in the 1940s about Ibn Arabi.[11] The simple text opened Nabaa’s eyes to the world of Sufism, and the spiritual connections within art and imagination.[12] In 1974, Nabaa returned to Damascus and began teaching at the city’s Faculty of Fine Arts.

Nabaa taught for many years in Damascus, and took great satisfaction in his profession. He took inspiration from his teachers in Egypt, who he saw not just as teachers but also as friends, and had a friendly, relaxed and trusting relationship with his students. Refusing to allow his students to call him ‘doctor’ or ‘professor’, he instead insisted they call him by his name, seeing their relationship akin to colleagues rather than any hierarchical arrangement.[13]

From the 1980s, Nabaa started to paint tranquil, ethereal figural works in an attempt to abandon the bitter realities of life in Syria during this period.[14] Fantastical depictions of women, often sourced from mythology, with draped fabrics, sultry eyes and flowing hair began to flood his creative output, awash with themes of beauty, fertility and femininity. Regularly surrounding them with luscious greenery, Nabaa found himself inspired by memories of his grandmother’s garden in Mezzah, Damascus, which he credits as “the roots that made the concepts, shapes and symbols you see today in my paintings”.[15] His paintings, Woman with a Lantern (1987) and The Garden (1991), both in the Dalloul Collection, are vibrant and striking examples of this period of his work. These paintings, reminiscent of pre-Raphaelite paintings of 19th Century England,[16] are overflowing with symbols and motifs both localising the women – such as the elaborate jewellery, clothing and headpieces, which were executed with masterful attention to detail – and suggestive of a host of other interpretations: for example, the apples in The Garden which can often symbolise feminine temptation, rooted in biblical tales and popular culture. Nabaa himself was drawn to the shape of the apple as a result of growing up near a grove which contained many apple trees, but also from the stories of Adam & Eve and the appeal of the rounded shape of the apple, much like a woman’s breast.[17] These lyrical paintings, of which he painted many during this period, were also intended to connect with the overarching symbol of the Syrian woman – both ancient and modern – housed within a space full of magical stories and memories

Nabaa continued painting well into the early-2000s, including a series entitled ‘Manifestations’ which showed a more experimental side to his oeuvre, using expressionist approaches to explore the topography of Syria. He also began artistically investigating the destruction of Baghdad and other cities following the invasion of Iraq, re-emphasising his solidarity with the rest of the Arab world and its heritage, whilst still retaining his Syrian identity: “I am influenced by the Pharaonic and Assyrian art, by Iraqi and international artistic achievements, but I express them in my Syrian language. I am the sum of this, and not an imitation of it”.[18]

Following a lifetime of tremendous artistic achievement, Nabaa was granted an Order of Merit by Syrian President, Bashar al-Assad, in 2005.[19] He continued to live and work in his hometown, Damascus, but sadly passed away from a heart attack in 2016. 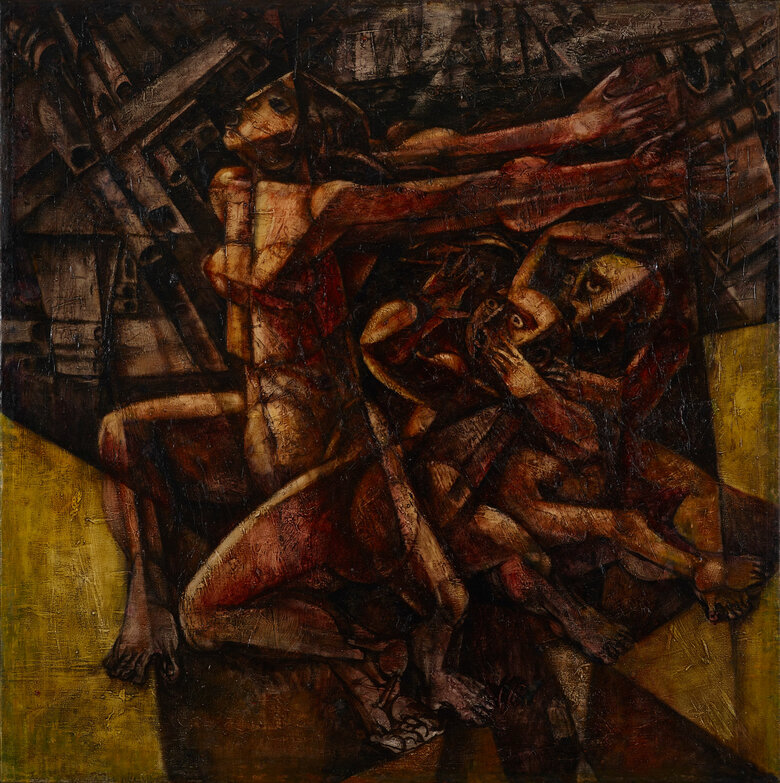 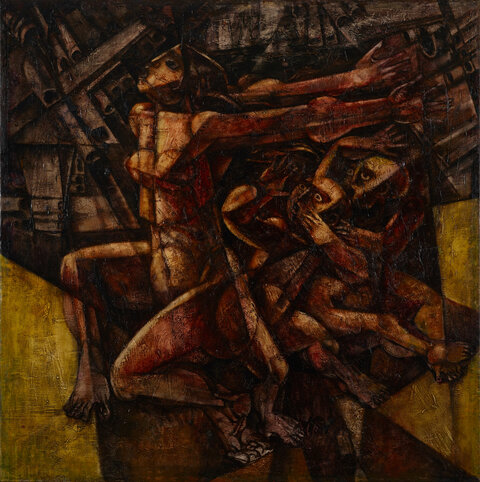 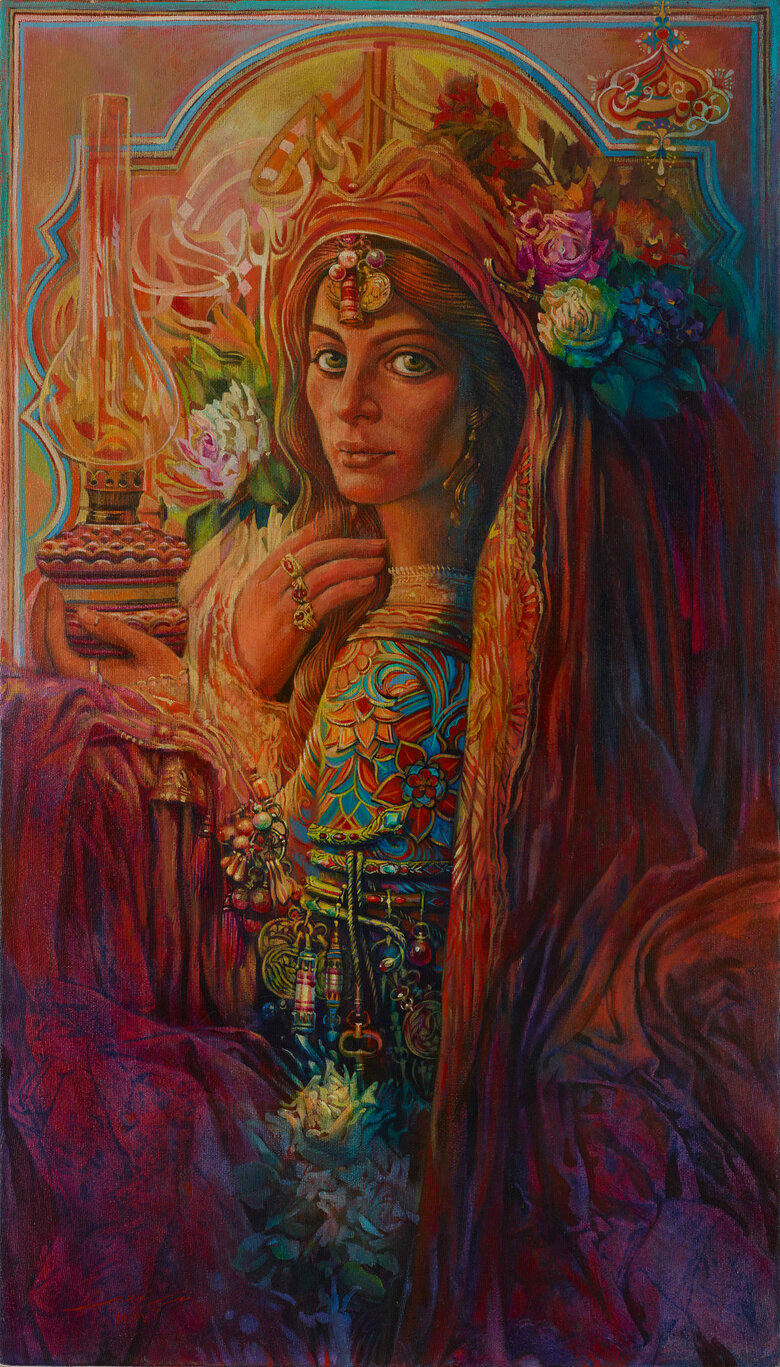 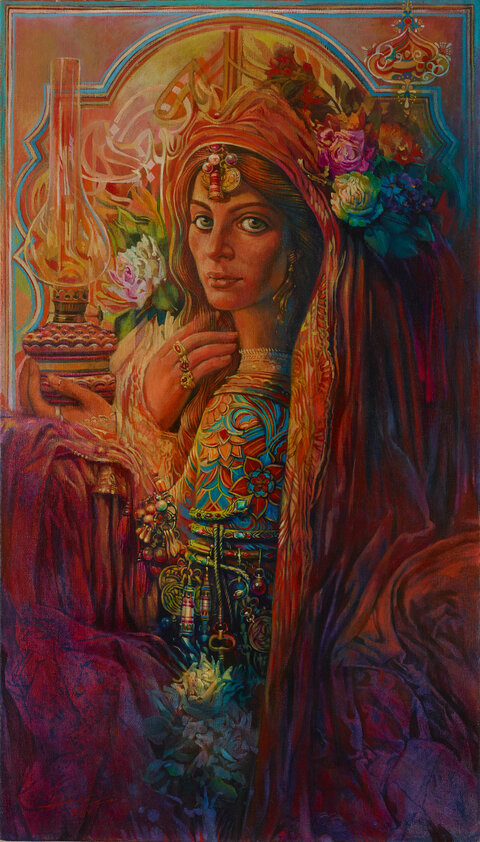 Woman with a Lantern 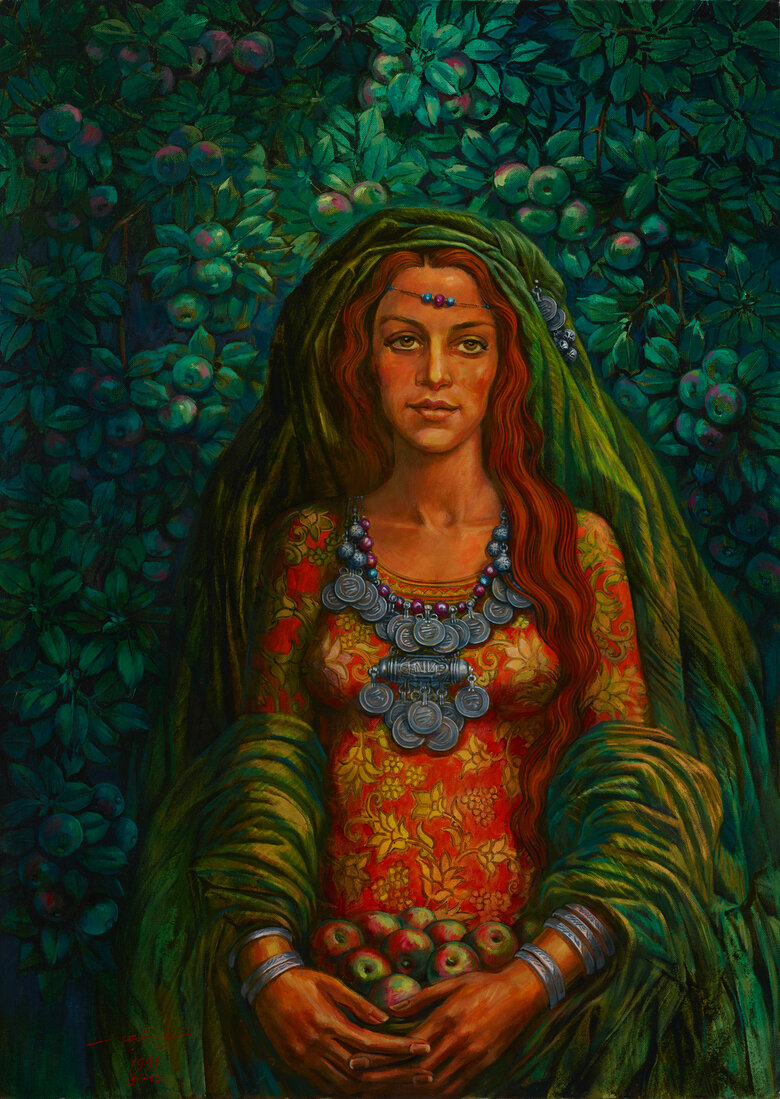 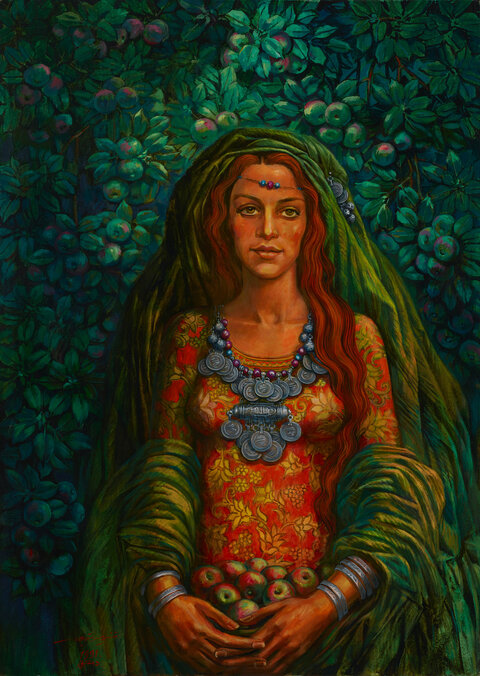