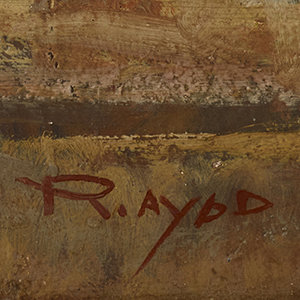 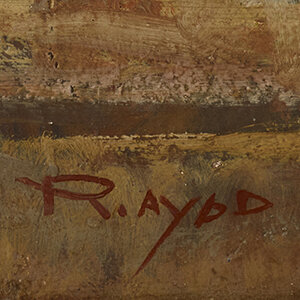 Born in 1892 in the village of Shobra Qabala located in the Nile Delta to a Coptic family, Ragheb Ayad enrolled in the Ecole des Frères, where he studied French. In 1908, he was among the first students at the School of Fine Arts in Cairo, when the establishment was newly founded by Prince Youssef Kamal (1882-1969), and directed by the French sculptor Guillaume Laplagne (1870-1927). After graduating in 1911, Ayad taught drawing for a while at the Coptic Secondary School, and at the Greater Coptic School. During this tenure, he traveled several times to France, and Italy. He was also the secretary of the House of Arts and Crafts (Dar al-Funun wa al-Sina’I al-Misriyya) in Cairo, created by the Egyptian art patron Fouad Abdel Malek (1878-1955) in the late 1910, to support fine, and industrial arts. It has been reported that, Ayad, and the painter Youssef Kamel (1891-1971), didn’t have the financial means to travel to Italy as much as they both wished. They consequently made the following agreement: between 1923 to 1924, one of them would travel to Italy, while the other one would take the responsibilities of his colleague’s courses, and vice versa[1].

In 1924, a session from the Egyptian parliament took place, and approved the request to allocate an annual budget, provided by the Treasury of the Ministry of Education, to fund scholarships abroad[2]. Under the direction of Guillaume Laplagne (1870-1927), the ‘scholar missions’ enabled the students to complete their artistic education in Europe, mainly in France, and Italy. Alongside with Youssef Kamel (1891-1971), and Mohamed Hassan (1906-1990), Ragheb Ayad was selected by the Italian painter, and teacher at the School of Fine Arts in Cairo, Paolo Forcella, to study at the Royal Academy of Fine Arts in Rome in 1924. Commonly called Al-Ruwwad, ‘the Pioneers’, these students first learnt the Italian language, and then entered together, into the studio of the Roman artist Umberto Coromaldi (1870-1948). The Pioneers obviously discovered the rich European art, and culture, but on the other hand, they could properly work on artworks, and monuments for real, since they had only seen them in black and white reproductions while in Egypt[3].

In 1928, Ragheb Ayad graduated from the decorative arts department, and went back to Egypt the following year. Since then, he became very active in many fields like teaching, and institutions’ management. He headed the decoration department of the School of Applied Arts in Giza, from 1930 to 1937. In 1942 Ayad was appointed professor, and director of the Free Studies Section of the School of Fine Arts in Cairo, which provided evening courses to the day students employees.  Ayad also directed the Coptic Museum of the capital city, between 1941 to 1946. Lastly, he replaced Youssef Kamel (1891-1971) as the new director of the Museum of Egyptian Art from 1952 to 1955. There, he, and the art critic Kamal al-Malakh (1918-1978), decided to inaugurate a space within the establishment in order to exhibit the works of the sculptor Mahmoud Mokhtar (1891-1934), which were then repatriated from France.

In 1929, Ragheb Ayad returned to Egypt from Italy. Enriched from his experience in Rome, he proposed an innovative idea to found an Egyptian Academy there, in order to encourage the student exchanges between the two countries. The institution received many scholarship students, and Mohamed Naghi (1888-1956) took over its direction in 1947[4].

Part of the pedagogical program at the School of Fine Arts in Cairo, the Egyptian scholar mission in Rome aimed to integrate the Egyptian students within the international artistic network, during their stays in European cities. Such opportunity would also familiarize the students with the avant-garde movements, as well as the international artistic dynamic, occurring during the 1920s. For example, Ragheb Ayad, and his Egyptian classmates, received the permission to attend the XVth Venice Biennale in 1926. During the event, he was able to contemplate the works of Futurist artists, including Umberto Boccioni (1882-1916), and Giacomo Balla (1871-1958), exhibited at the U.S.S.R. Pavilion, under the name Mostra del Futurismo Italiano. These works truly captivated him, and the early paintings of Ayad reflect the inspiration, that he took from them, especially with the dynamic lines of the drawing, and vivid colors. Another artist named Ferruccio Ferrazzi (1891-1978) was particularly a source of inspiration, since he shared with Ayad the same interest in decorative painting[5].

It is not surprising that Futurist artists, and their innovative works, played a role in Ragheb Ayad’s artistic journey. Since the very beginning, the painter had always rejected academism, which was promoted, and taught by the educational art institutions in Egypt. In 1958, he even said during a lecture at the Museum of Modern Art in Cairo: ‘I have to be honest with you. (…) I have always hated – and still do – pure academic studies, such as drawing from statues, because in my opinion they are lifeless. (…)’[6]. Freed from conventional rules, Ayad imposed the specificity of his style from 1930 to 1938, and highly manifested his passion for the ancient Egyptian art. Like Mahmoud Mokhtar (1891-1934) did before, Ragheb Ayad chose to combine European artistic modern practice with subjects, that refer to the Egyptian local imagery. In the work Le Paysan et ses vaches (The Peasant and his cows) from 1961, part of the Dalloul Art Foundation’s collection, the artist used a modern treatment, through which he simplified the lines of the drawing, and reduced the elements to abstracted forms. He purposely employed a flat perspective, and in the foreground; the man, the cows, and the tree are all at the same scale. Unexpectedly, he also employed the blue color, and he varied the tones, to paint the body of the peasant – fallah – and the two cows. Here, the conception of the farmer’s body is inherent to the Egyptian ancient stylization: the face is seen in profile, while the body is in frontal view.

Like ancient art, folk culture was greatly celebrated in the oeuvre of Ragheb Ayad. In The Dancing Horse and the Musicians of Upper Egypt, a non-dated work also part of the Dalloul Art Foundation’s collection, he depicted a joyful scene, where three musicians are playing music with traditional instruments, while another man is riding a horse next to them. Judging from the colorful adornment of the horseman, and his mount; the scene somehow recalls a festival – as it is common in the Arab world to attend festivals including horse riding, and dancing. Through the illustrations of daily life scenes, weddings, religious celebrations, and labor in the fields, Ayad showed his attachment to Egyptian peasant life. However, he tended to represent it through an expressionist style, instead of representing an objective reality. He effectively arranged the physical reality, by distorting, and exaggerating some parts of the human body like the hands, and the eyes. He gave his topics a humoristic touch, which even renders a caricature-like ensemble. The use of earthy colors is, again, reminiscent of the mural painting of Ancient Egypt bas-reliefs, in particular the ones in the Tombs of the Nobles, near Luxor. It is important not to forget that Ragheb Ayad also excelled in decorative art, especially during the 1930s, and the 1940s, when he was commissioned to produce the décor of some catholic, and Coptic religious edifices[7]. These skills are consequently apparent in his painted oeuvre, in which he liked to create horizontal pieces, and placed importance on the narrative line of the compositions, like a frieze. This also proves Ayad’s knowledge in Coptic artistic tradition, which can be considered to be linked with the ancient Egyptian art in a ‘Christianized form’[8].

In both paintings, Ragheb Ayad revealed some scenes from the Egyptian countryside, as well as the agricultural activity. The peasantry was a major theme, that the Pioneers used to tackle in their artistic programs, as it reflected the authentic values, and traditions of Egypt. Over millennia, peasants had plowed the fields, raised animals, and exploited the waters of the Nile river, whereas the Egyptian local bourgeoisie was more willing to adopt the standards of European societies. Thus, modern artists, such as Ragheb Ayad, aimed to reconnect the public to an artistic language; in which the visual references belong to their own history, and culture. In the first decades of the 20th century, emerging artistic, and cultural heritage from the past, was a path to circumvent the academic rules in the making of a modern national, and authentic art.

The State Merit Prize for the Arts 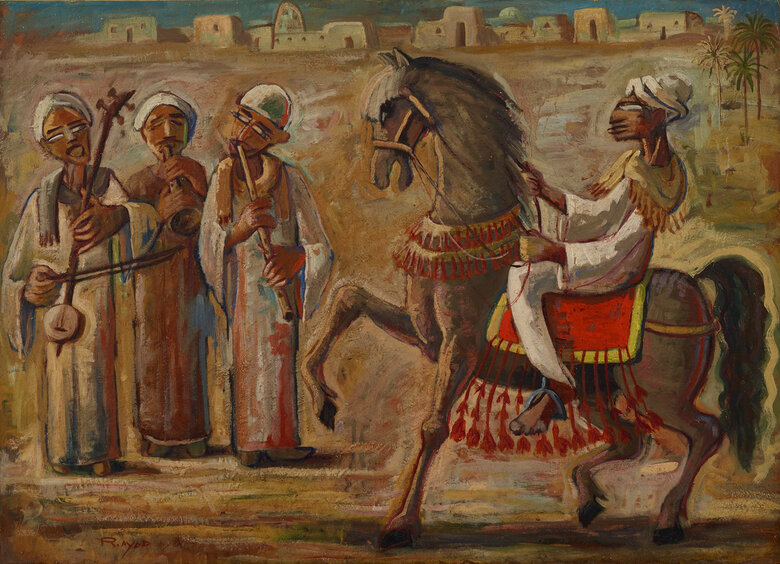 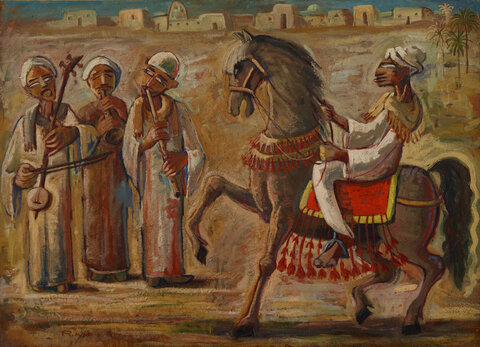 The Dancing Horse & the Musicians of Upper Egypt 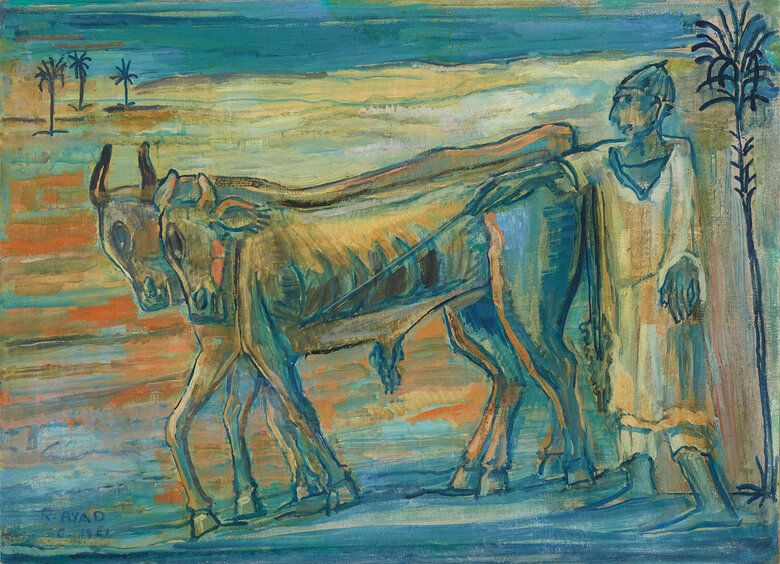 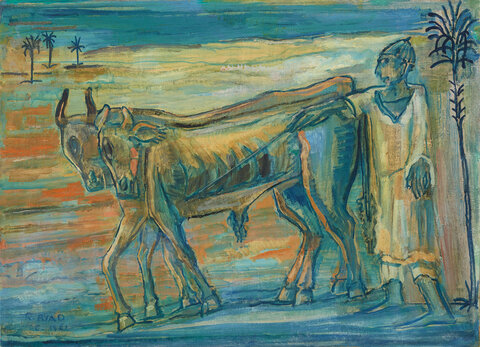 Le paysan et ses vaches/ The peasant and his cows