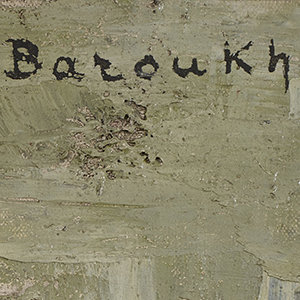 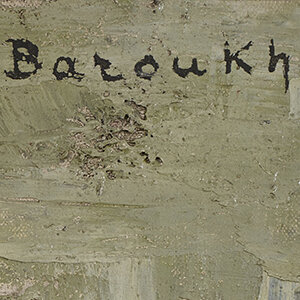 A predominantly abstract painter with a great desire for experimentation, Ezekiel Barroukh was a significant artistic contributor during a crucial period in Egypt’s journey towards modernism. Born in 1909 in the city of Mansourah, Barroukh studied at the French Lycée in Alexandria, a prestigious international school established in the early twentieth century.[1] After completing school, he left for Rome to study in the Italian capital’s renowned Accademia di Belle Arti, graduating with a diploma from the Department of Painting in the early 1930s. With Italy deep in the midst of fascism, spearheaded by Prime Minister Benito Mussolini, Barroukh – both an Egyptian and a man of Jewish faith – felt uncomfortable as a foreigner,[2] and chose to return to Egypt in 1934.

Settling back into life in Alexandria, Barroukh began his career as a professional painter, teaching drawing and painting classes, whilst also creating a range of his own still lifes, portraits and landscapes.[3] In 1935, he exhibited his work at both the Italian Club of Alexandria and also at the Salon du Caire, and it was during this time that his art caught the eye of Mohamed Naghi, an accomplished modern Egyptian painter, who encouraged Barroukh to join l’Atelier d’Alexandrie which Naghi had set up just one year before as a space to gather Alexandrian painters.[4] The Atelier became a prominent fixture in Alexandria, and Barroukh himself organized and participated in many of the Atelier’s events between 1940-1946, with his work at this point being predominantly figurative.[5]

The 1930s in particular were a pivotal period for Barroukh, and Egypt itself was going through  significant upheaval with the country gaining independence in 1936. Artists began actively pursuing a role in their new, modern country, carving out space for communal creative exploration and gave themselves permission to push boundaries. During this period, Barroukh was working closely with fellow artist Ramses Younan,[6] who in 1938 wrote a rebellious, revolutionary manifesto entitled ‘Vive l'art degénéré’ (or ‘Long live degenerate art’). This manifesto sparked the dawn of a new group – Art and Liberty (Art et Liberté )– headed by Younan and artist George Henein, and providing a new generation of artists, intellectuals and political activists with a platform to explore their culture, resist fascism, nationalism and colonialism, and call for a social revolution with surrealist art and writing at its core.[7] The group wanted to challenge all previous notions of what art could be and achieve, rejecting the notion of “art for art’s sake”[8] and fighting against academic and bourgeois limitations on creativity. Barroukh, who had also become friends with Surrealist writers René Etiemble and Lawrence Durrell,[9] was an active member of the group and present at all five radical exhibitions in 1940, 1941, 1943, 1944 and 1945,[10] although his approach to his work was perhaps not as bold and macabre as other members, developing his own style which combined elements of sensuality, mystery and realism. He also exhibited his work at the Salon du Caire regularly in the early 1940s, before deciding to push his career even further by moving to Paris in 1946. Just two years later, the Art and Liberty group was dissolved, with many members forming ‘The Contemporary Art Group’, diverting away from surrealism and instead focusing on local iconography and popular arts and crafts.[11]

The postwar Parisian art scene was a fascinating environment for Barroukh. André Lhote, a French artist and educator who had visited and taught in Egypt in 1951 and 1952,[12] set up Académie André Lhote in Paris in the 1920s and by the 1940s, it was frequented by many local and international artists, including Effat Naghi and Mohamed Naghi, [13] and also Hussein Bicar and Samir Rafi.[14] Barroukh also attended the Academy in 1952, and took part it in the Salon de Mai that same year with Lhote [15]. His painting titled Baigneuse (‘Bather’, now part of the Dalloul Collection), also painted in 1952 and most likely painted in Paris, gives an insight into the new artistic language Barroukh was seeking to experiment with, using flat colours, geometrical forms and abstraction to create conceptual scenes which borrowed elements from his experiences with the Art and Liberty group. Barroukh’s figure, laid reclining across his canvas, rhythmically following and intertwined with the linear background, but fragmented and dismembered, has roots in the group’s revolt against the idealised naturalism of the bourgeoisie. In deforming and distorting figures, the artists would illustrate the economic justice in Egyptian society, becoming a form of artistic protest.[16] Whilst Barroukh’s figure may not look pained or particularly violently maimed and is in fact a relaxed bather, the remnants of the surrealist techniques of his former colleagues have found their way into his somewhat-cubist composition.

The artist returned briefly to Alexandria for an exhibition in 1954, and then to Cairo, before settling in France permanently. Throughout the 1950s and 1960s, he participated in various exhibitions, including in Chateauroux many times and at Paris’ Galerie A.G., in addition to many editions of Salon de Mai, Salon des Comparaisons, and also the Biennale de Conches in 1961, after which the French State purchased one of Barroukh’s works.[17] After his 1967 solo exhibition at Galerie 9 in Paris, the French State purchased yet another work by Barroukh, firmly establishing him as a highly-regarded and professional artist in his new home.

The 1960s and 1970s sparked a search for a new artistic vocabulary: Barroukh strived to progress and to innovate, leading him to move away from cubism and his previous interpretations of abstraction and towards more informal art.[18] Experimenting more with monochrome and expressive techniques, this may indeed be the period in which he painted two undated works in the Dalloul Collection, both of which have a spontaneous and strikingly animated contemporary quality – a world away from his early ventures into realism (and occasionally surrealism) and the abstraction and cubism of his post-war works. However, following this period, he returned to figuration and traditional still lifes, whilst also sketching every morning in his favourite Parisian café.[19] Continuing to work consistently, Barroukh was invited to participate in the 1980 Salon d’Automne and exhibited regularly throughout the early 1980s. In 1984, the National Contemporary Art Fund (Fond National d’Art Contemporain) of France purchased his 1983 painting ‘Le Modèle’, shortly before Barroukh passed away in Paris at the age of 75.[20] Aside from his three paintings housed in the Dalloul Collection, many of his works are now held in numerous museums across France and in the Barjeel Collection in the United Arab Emirates, as well as in both the Museum of Modern Art in Cairo, and the Museum of Fine Arts in Alexandria, the city he regarded as home.

Exhibition of the Lauréats of the Hallmark Prize, Paris, France 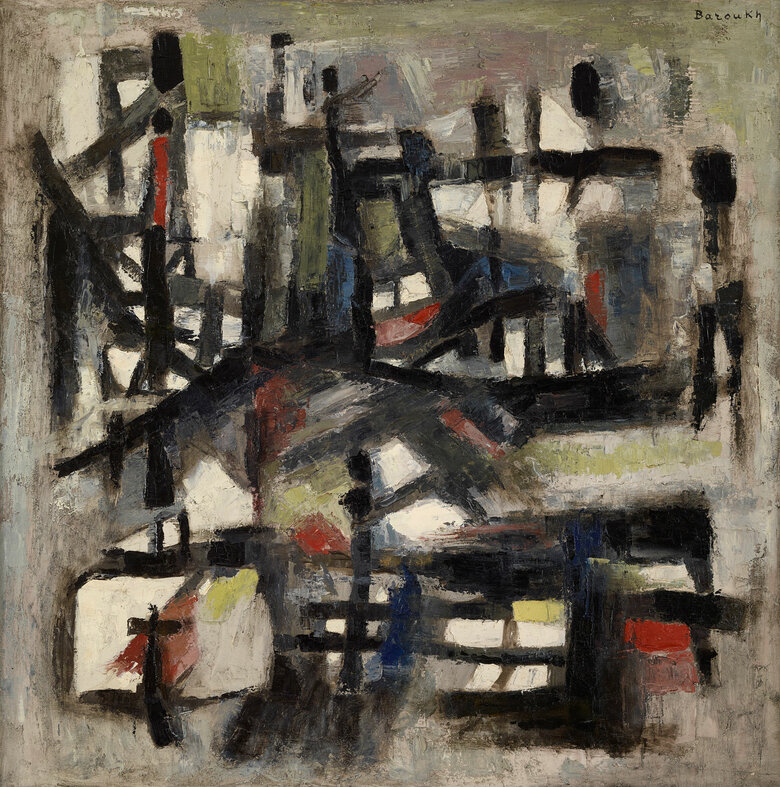 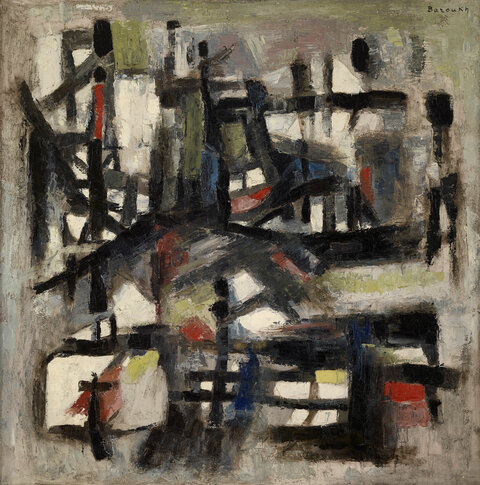 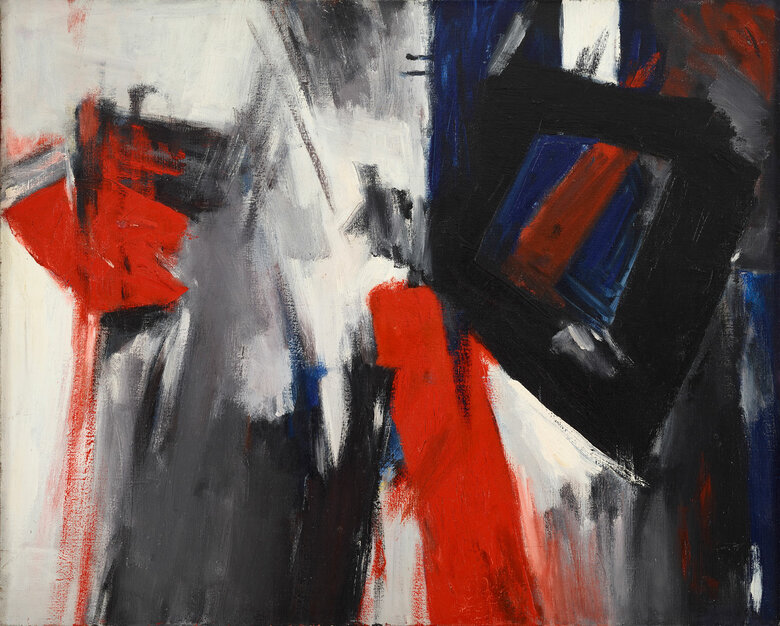 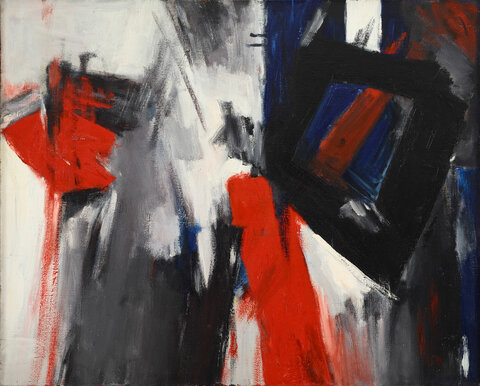