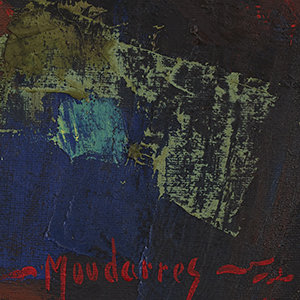 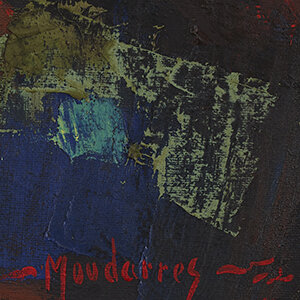 A pioneering figure in the history of modern Syrian art, Fateh Moudarres was born in 1922 in a village near Aleppo. Moudarres gained recognition for his remarkable talent during his secondary...

A pioneering figure in the history of modern Syrian art, Fateh Moudarres was born in 1922 in a village near Aleppo. Moudarres gained recognition for his remarkable talent during his secondary education at the Aleppo American College, from which he graduated in 1940. From 1956 to 1960, he earned a bachelor’s degree at the Academia Di Belle Arti in Rome, later pursuing graduate studies at the École Supérieure des Beaux-Arts in Paris (1969 -1972). Upon his return to Syria, he taught at the University of Damascus, where he headed the Department of Fine Arts and became the Dean of Fine Arts Association, until 1993. Throughout his life, he continued to develop his skills under the tutelage of Wahbi Al Hariri (1914-1994), his mentor and lifelong friend, who introduced him to fellow artist Louay Kayali. Moudarres and Kayali represented Syria together in the 1961 Venice Biennale.

Self-taught at an early age, he focused on learning realist techniques before beginning his formal education, when he took an interest in surrealism. During his education he pursued this interest and developed his skills in abstraction. Though Moudarres had already begun to tap into his cultural heritage for artistic inspiration before he even arrived in Europe, he was encouraged further in this direction by his valued teacher, Franco Gentilini (1909-1981), during his time in Italy. Drawing from Sumerian, Assyrian, and Islamic visual traditions, as well as Christian iconography, Moudarres developed a personal style marked by warm tones and plays between figuration and abstraction, transparency and solidity, becoming lighter in color and more abstract in form as his career progressed. Enthralled by the magic of nature and its limitless spectrum of hues, he painted sprawling, euphoric landscapes reminiscent of the countryside where he grew up. His figures took on flat, rectangular forms, evoking Sumerian figurines and Assyrian rulers though they depicted ordinary Syrian peasants, women such as his mother, and children, stacked next to each other in an ambiguous, depthless setting.

For many, the simplicity of Moudarres’ forms elicited “primitive,” childish connotations. This style was, however, carefully and thoughtfully developed over a lifetime; when asked if his ‘childish’ paintings could be imitated, the artist’s second wife, Shoukran, replied in the negative, exclaiming that “it took him 50 years to paint like a child!”

Moudarres was a sensitive soul who wrote, played the piano, enjoyed Sufi music, and cherished the sound of the wind. In keeping with the principles espoused by European Surrealists, he considered his subconscious as a tool for creation, using techniques such as automatic drawing to give form to repressed memories and unconscious desires.  His emotionally-charged works draw from deeply personal sources, including the loss of his father at the age of four, and the untimely deaths of his two children. Influenced by the existentialist philosophy of Jean-Paul Sartre, whom he met in Europe, Moudarres acknowledged the transformative power of death and the importance of confronting it as a means of sharpening one’s relationship to life itself. He expressed feelings of distress and abandonment in works depicting crucifixion, martyrdom, and mythology. The artist also believed that by mastering the art of effective form and plasticity of color, he could essentially “reinvent time,” manipulating the temporal dimension in a painting. Though much of his work draws from the personal subject matter, it also addresses humanitarian and socio-political issues that surrounded the artist, specifically after he moved to Damascus following the agricultural crisis of 1960. His societal critique usually takes the form of the symbolic, expressed through animals; the horse, the beast, and the cat, for example, appear in his paintings to represent the hero, the tyrant, and temptation.

Moudarres’s paintings are texturally rich, alternately using dense applications of oil paint, often mixed with sand and applied with scratchy brush strokes, and loose, gestural applications of thinned paint evocative of watercolor. Color, however, is the most distinctive element of Moudarres’s visual language. He related himself to Van Gogh in his dedication to the natural harmony of color. Van Gogh’s use of color, however, was primarily formal, drawing from Delacroix’s color theory in order to exploit principles of simultaneous and tonal contrasts, while Moudarres ascribed symbolic roles to each color he used. He considered red to be a primitive, aggressive color, which he used cautiously in politically oriented paintings due to its associations with battle and bloodshed. “Despite its power, I use red with kindness, and I often soften it with strokes of black or gold to overpower its strength,” the artist explained in a documentary produced in the late 1990s. Specific colors purportedly frightened or offended the artist; in the same documentary,  he referred to Verona Green as a “whorish color,” one that “screams like an eggplant vendor on the streets!” He saw blue as a noble, witty color that served best in political critique; gold – often applied in gold leaf – as symbolic of Byzantine art and useful in containing or negating the dominance of other colors; white as a color of majesty, a generous host to the other hues on his canvas.

He held many solo exhibitions, the first of which was in Aleppo, then in Sweden, New York, Rome, Munich, Paris, Beirut, and Dubai.

Retrospective of his work, L’Institut du Monde Arabe, Paris in 1995.

Sao Paulo Biennale, was granted a Medal of Honor

The Collection of Rudolf and Maria Fechter Dr. Rudolf Fechter, a German diplomat and statesman, was also a friend of Moudarres and bought several pieces; arguably it was the second major collection of the artist's work before slowly being auctioned recently at Christie's.

Moudarres’ works were shown in the embassy rooms in Damascus, Adis Ababa and Dublin.

The Collection of Walter Scheel, former Foreign Affairs Minister of Germany, and later President,was exposed to Moudarres's work through Dr. Fechter and, an avid collector, acquired several pieces and maintains a small but sizeable collection.

In Conversation With : Anneka Lenssen Part 2

In Conversation With : Anneka Lenssen Part 1

In Conversation With : Hala Khayat 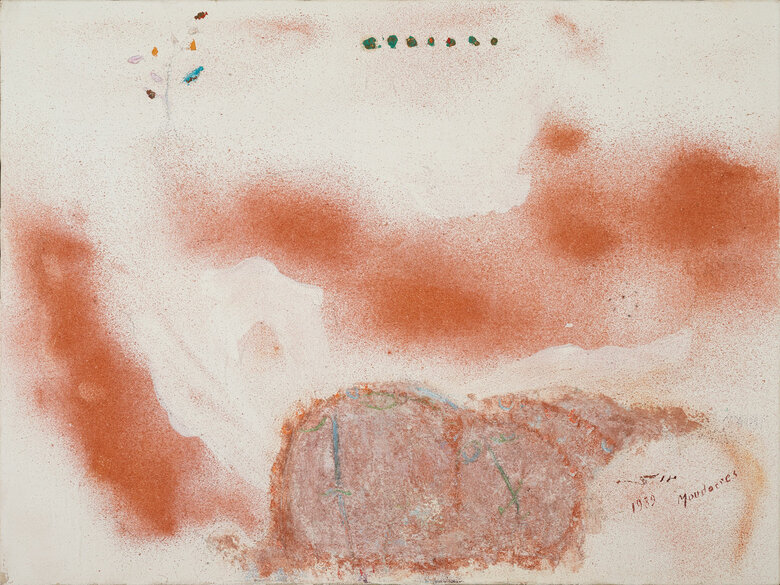 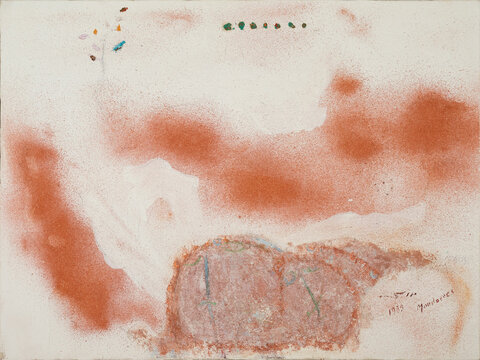 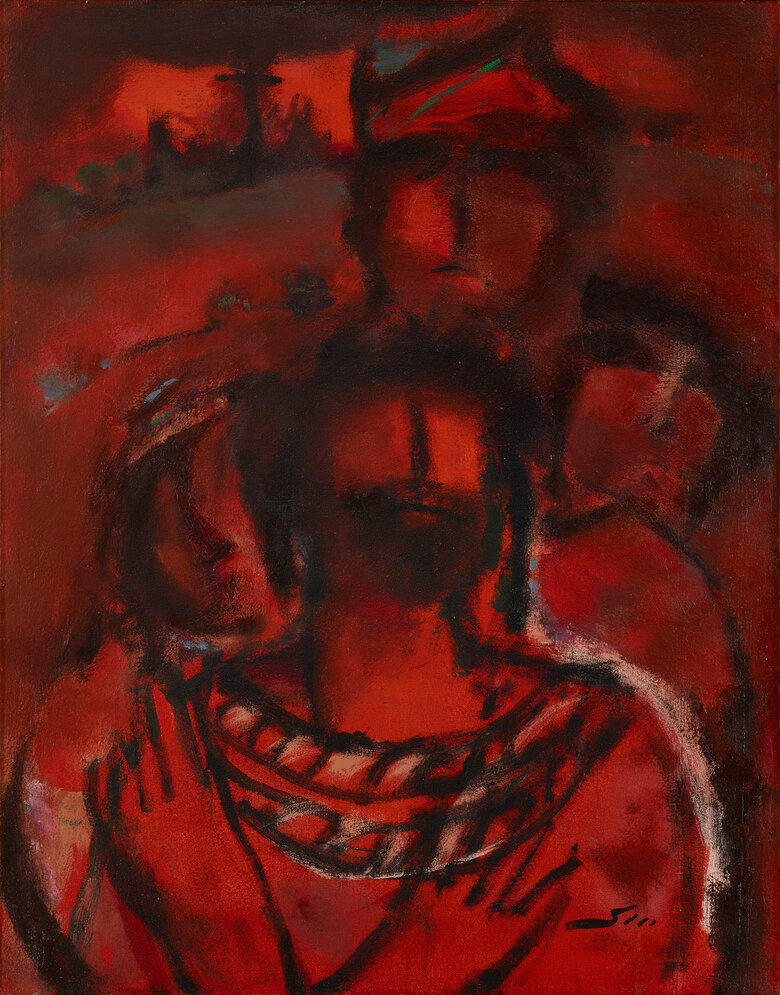 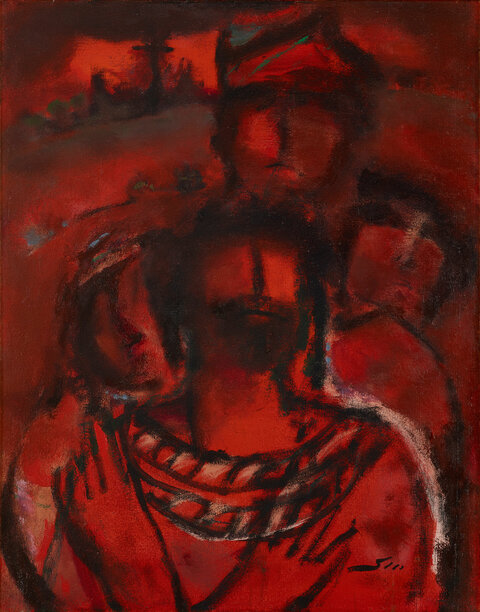 The Christ, the mother and Magdalena and John the Younger 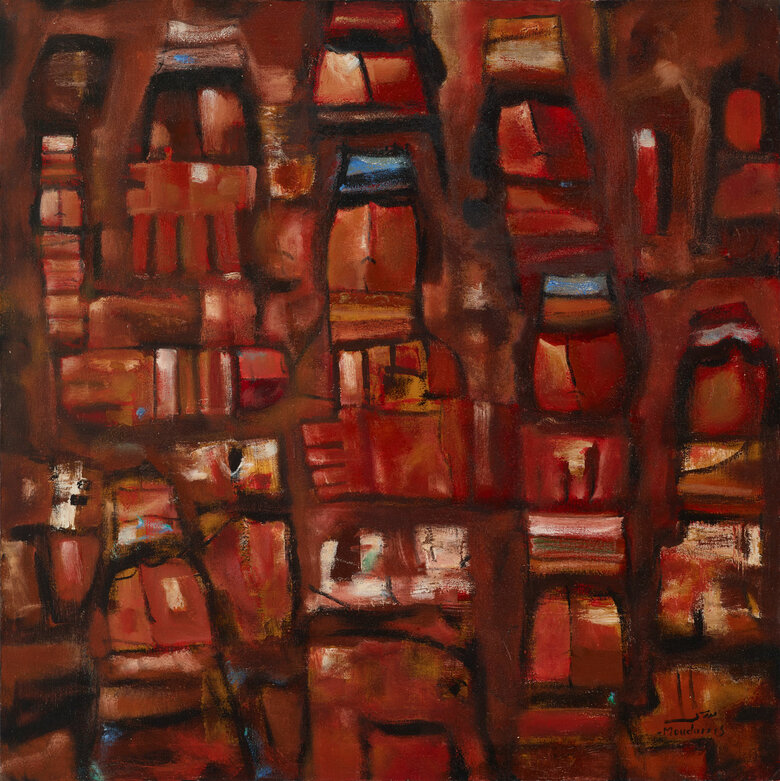 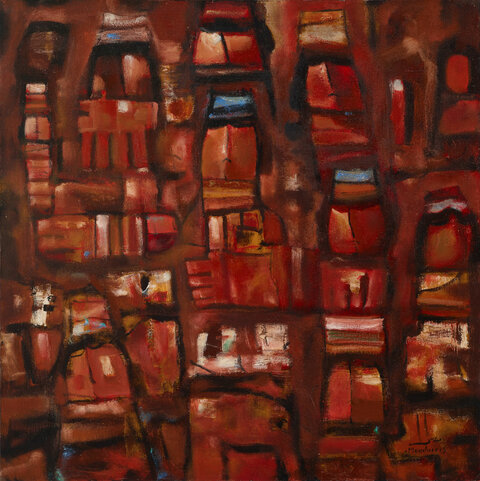 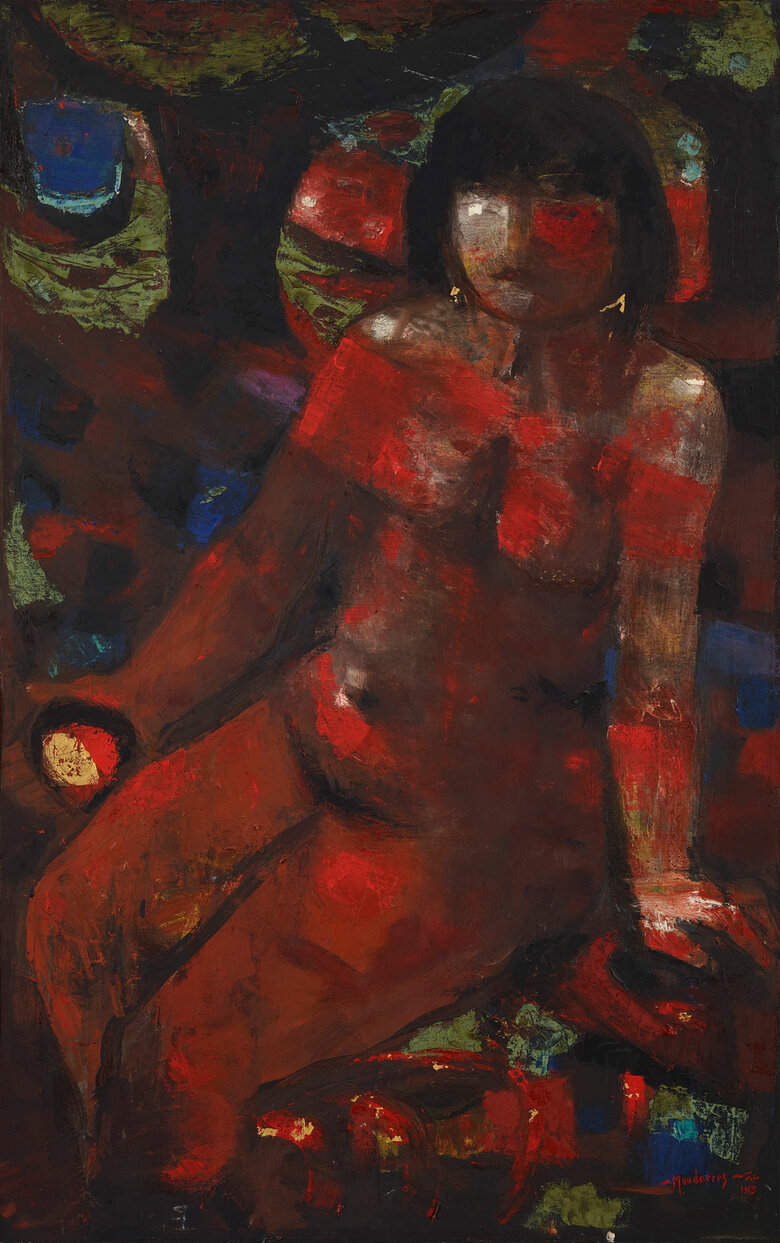 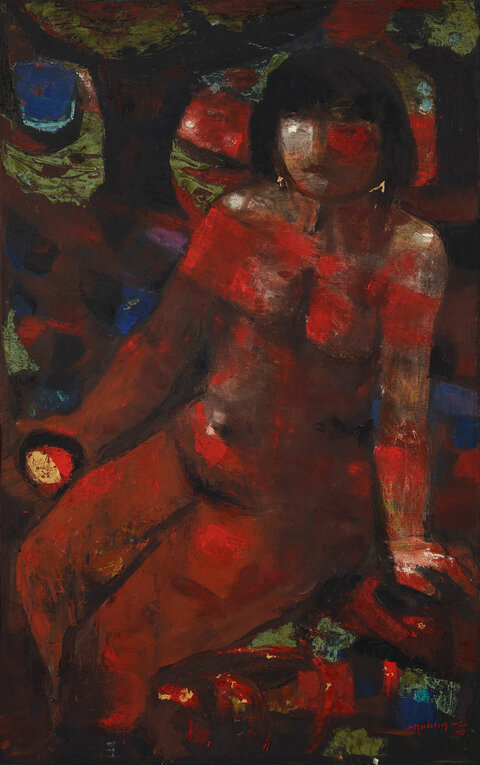 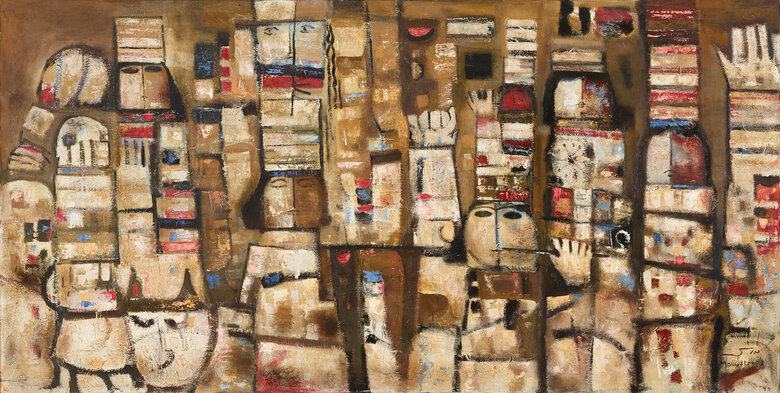 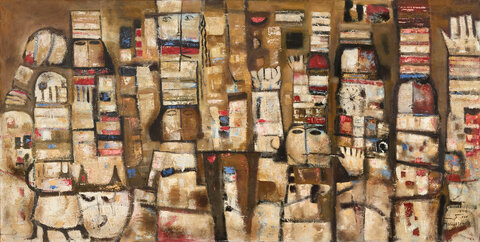 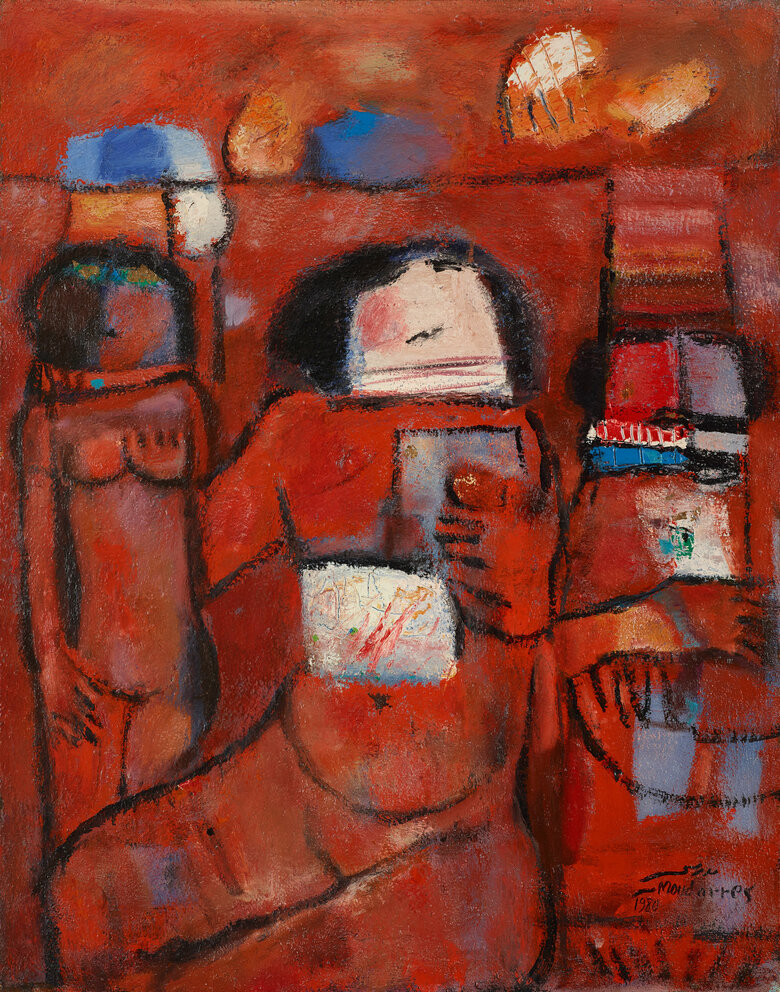 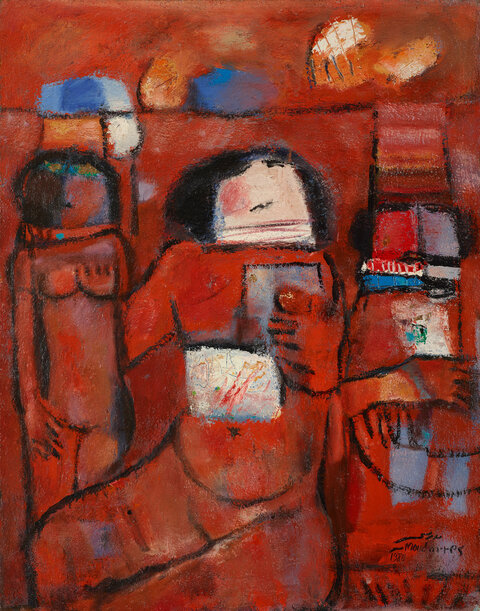 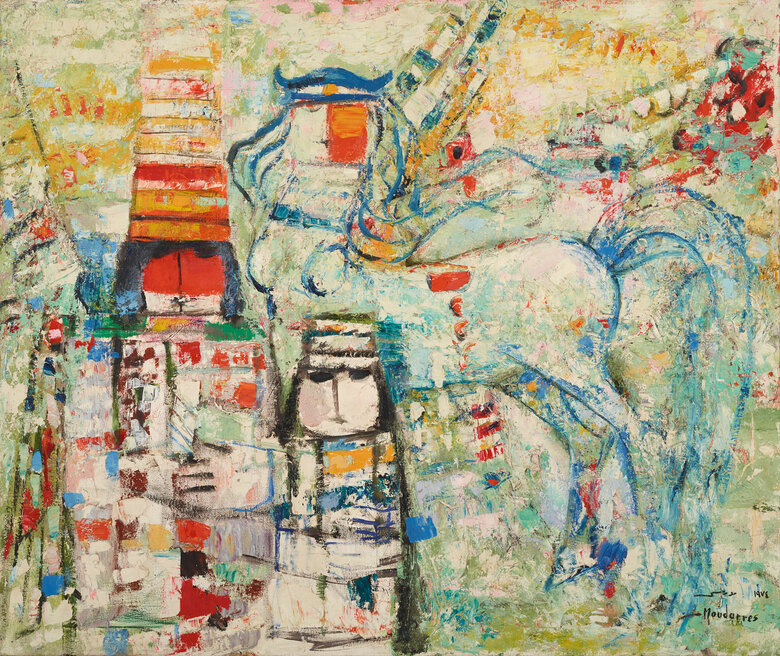 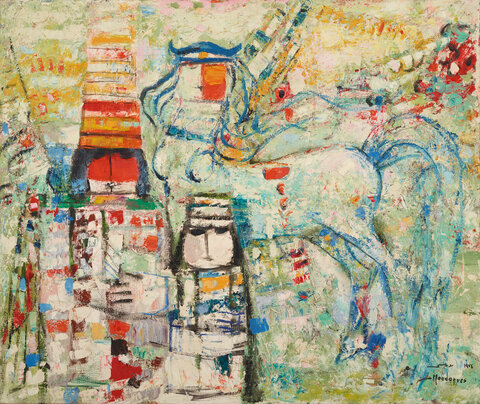