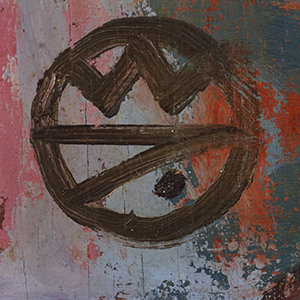 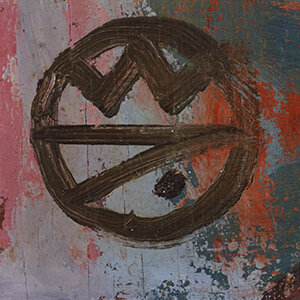 Born in 1917 in the neighborhood of Bab al-Shaariya, Cairo, Gamal El Seguini spent his childhood there, which was located between two districts: the modern, and Europeanized ‘Abdeen, and the popular El-Gamaliya district. At a very young age, he was consequently exposed to multiple, and various lifestyles, as well as religions. In 1933, he enrolled in the School of Fine Arts in Cairo, and specialized in sculpture, training under the supervision of the Swedish sculptor Boris Frödman-Cluzel (1878-1959). After graduating in 1938, he decided to visit France, where he stayed in Paris, and discovered the works of the French sculptors Antoine Bourdelle (1861-1929), and Auguste Rodin (1840-1917). Yet, the outbreak of WWII obliged him to leave the country. Back in Egypt, he formed the artistic group called Sawt al-Fannan (The Voice of the Artist) in 1945; and which encouraged the practice of plastic art, and supported young Egyptian artists. In 1947, El Seguini joined the the Group of Modern Art, alongside Gazbia Sirry (1925-), Hamed Oweis (1919-2011), and Zeinab Abdel Hamid (1919-2002), but traveled to Europe again that same year. He went to Italy on a scholarship, where he completed his education in metalwork, and sculpture at the Accademia di Belle Arti in Rome. When he returned to Egypt in 1951, El Seguini actively contributed to art education, by holding numerous positions within art institutions. He started teaching at the School of Fine Arts in Cairo, prior to relocating to Alexandria, where he was appointed head of the department of sculpture at the Faculty of Fine Arts in 1958.

For a time, Gamal El Seguini was frustrated to see all of his sculptures, crammed on top of each other in his studio, located in the district of Zamalek, Cairo. He tried to get some commissions for public spaces, like a museum, to display his works. In vain, he desperately threw his works into the Nile river in 1969[1].

The oeuvre of Gamal El-Seguini corresponds to a period in Egypt, when art, and politics found a common path. In 1952, the Revolution led by the Free Officers, overthrew the monarchy ruled by King Farouk (1920-1965), and put in power General Gamal Abdel Nasser (1918-1970). In the Nasserist politics, it was fundamental to elevate the local, and popular culture, in opposition to the imperialist culture from the West. Gamal Abdel Nasser (1918-1970) particularly, and personally concerned himself with the cultural development of the country, as the first Egyptian minister of culture Tharwat ‘Ukasha (1921-2012) stated: ‘He was keen on supporting cultural projects, believing that cultural revival would bring to the intellectual sphere what heavy industrialization bought to the sphere of industry’[2]. From the 1950s to the late 1960s, the state progressively took the place of rich art patrons, and imposed itself as the great promoter of artistic, but also musical, cinematographic and literary creation. According to the socialist ideals, the main priority was to establish a mass culture, accessible to every strata of the society, and for which the Ministry of Culture was founded in 1958. Therefore, it is evident that a big majority of artists produced works, which carried an important part of the ideology of the Revolution during these two decades.

In the 1950s, the works of Gamal El-Seguini embraced this political change, and artistic dynamic occurring in Egypt. Through a large, and rich iconographic program, he used to make sculptures, in which the subjects were related to the motherland and the armed conflicts with Israel, especially after the Six-Day War in 1967. The paintings, that El Seguini created, were a celebration of the life in the Egyptian country, along the Nile. Part of the Dalloul Art Foundation’s collection, Untitled (1952), is a relevant example of the importance for the power to connect the leader to the masses, through a visual artistic language. El-Seguini produced the bust of Gamal Abdel Nasser (1918-1970). The facial expression for this bust was thoroughly executed, with attention to detail. The Egyptian president’s portrait proudly stands, slightly frowning, with deep eyes. The figure looks confident, and captures the attention of the viewer. On another level, using bronze as a material for the sculpture, also emphasizes the strength of his character, by giving Nasser a rough, and massive appearance. The message is clear: Gamal Abdel Nasser (1918-1970) is the new strong man of Egypt, with big ambitions. The power shows itself legit, to a local, and international audience and the leader is presented as an ‘exemplary personage’, who stands out by his charisma, and actions[3].

The cultural change, resulting from the Revolutionary area, consisted in the re-appropriation of the national identity. Although this approach had developed since the beginning of the 20th century with the works of Mahmoud Mokhtar (1891-1934), and Mahmoud Said (1897-1964), it became more associated to politics as of the 1950s. Recalling and promoting the thousand-year-old history of Egypt, whether Ancient, or Arab-Islamic, in the artistic program, responded to the nationalist aspirations of the Nasserist government. This program confirmed the greatness of the country. In Untitled (1951), also part of the Dalloul Art Foundation’s collection, El-Seguini depicted the portrait of a young lady (his wife in this case), holding a dove in her left hand, while another dove perches on her right shoulder. Here, the artist celebrated the artistic tradition of ancient Egypt, referring to the mural painting present on the wall of the temples, and tombs from the Pharaonic times. With a flat perspective, the character is seen in profile, whereas the torso is viewed from the front. He reduced the drawing of the elements to simple lines, and almost abstract shapes. The use of the vibrant colors such as red, and yellow, also remind of the palette of color applied by ancient Egyptian artists, to decorate the narrative scenes, and the hieroglyphs. The application of thick brushstrokes makes a sort of relief, as if El-Seguini carved the canvas. Hence, this demonstrates how the artist exploited the skills of an experienced sculptor in painting. This mastery, which combines two different techniques, renders an ensemble, which testifies his inspiration from the Ancient Egyptian arts. Yet, the portrait is modern since the woman, with red-lipstick, has a Western-styled printed dress, and short haircut. And he integrated the dove in the composition, which is known to be the symbol of peace in the contemporary popular culture.

During his lifetime, Gamal El-Seguini had always been confronted with the two worlds, Egyptian, and Western. However, his sculpted, and painted oeuvre remained true to his roots, and exemplified the political, and social transition, which pushed Egypt to the modern time, and whose reforms brought pride to the Nasserist regime.

Gamal El Seguini passed away in 1977 in Barcelona.