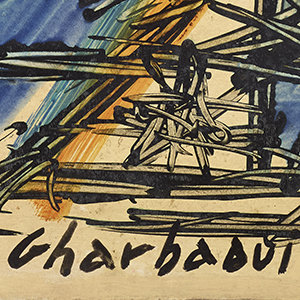 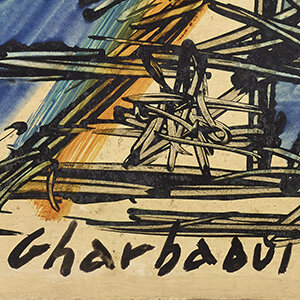 Born in Jorf el-Melha, in the province of Sidi Kacem, Morocco, Jilali Gharbaoui lost his parents, before he turned 2. First, he was placed in the custody of one of his uncles, who eventually put him in an orphanage. In the 1940s, Gharbaoui relocated to the city of Fez, where he pursued secondary school curriculum, and later on, he became a newsagent. In his spare time, he drew, and exhibited some of his works on the floor in the street. These drawings caught the attention of the Orientalist French artist Marcel Vicaire (1893-1976), who placed Gharbaoui into the care of his colleague, the Moroccan writer Ahmed Sefrioui (1915-2004). Back then, the latter was the director of the École des Beaux-Arts in Rabat, and noticed the talent of Jilali Gharbaoui, who attended evening drawing courses at the Académie des Arts in Fez. In 1952, the young student traveled to France, where he studied on a scholarship at the École Nationale Supérieure des Beaux-Arts in Paris, attending courses at the atelier of Jean Souverbie (1891-1981). Yet, because he was not fully satisfied by the teaching at the institution, he also took courses the Académie de la Grande Chaumière in Paris between 1953 and 1954. In the French capital city, Gharbaoui enjoyed the vivid cultural life, by frequenting intellectuals, and artistic places. More specifically, he encountered, and befriended the influent French art critic Pierre Restany (1930-2003), as well as the Belgian-born poet, and painter Henri Michaux (1899-1984). With the latter, Gharbaoui started drinking, and taking drugs[1].

In 1955, Jilali Gharaboui returned to Morocco, thinking that he would become a great recognized painter, and settled in Rabat. Though, he didn’t have the expected success; and already suffering from psychiatric disorders, he tried to commit suicide for the first time in 1956. In the space of a few weeks, the artist attempted suicide again, by throwing himself in the Bou Regreg river in Rabat. Faced with the distress of his friend, Ahmed Sefroui (1915-2004) asked the Moroccan painter Farid Belkahia (1934-2014) to give Jilali Gharbaoui his scholarship to study at the Accademia di Belli Arte in Rome. Thus, in 1957, Gharbaoui was able to stay in Italy for one year[2], and met the Moroccan artist Mohamed Melehi (1936-2020), who was also studying there. Yet, gravely ill, he had to shorten his stay in Rome, and went back to Morocco, where he received healthcare in the Benedictine monastery of Tioumliline, in Southern Morocco. Throughout his life, Gharbaoui’s multiple crises – during which he sometimes destroyed his paintings, and never stopped going back and forth to hospitals. He was under regular care of doctors, especially at the psychiatric hospital in Salé, where he was diagnosed with schizophrenia.

Although fragile, Jilali Gharbaoui traveled a lot to Europe in the late 1950s, especially to Amsterdam, where discovered the artworks of Karel Appel (1921-2006). He also went to Japan, and the United States, where he was awarded first prize in an art competition organized by the San Francisco Museum of Art in 1957.

In 1960, the French art critic Pierre Restany (1930-2003) worked on founding the movement of New Realism in Paris, and noticed that Jilali Gharbaoui liked to paint with the blue color. Hence, he asked him to produce only monochromatic blue paintings for his project. But since Gharbaoui refused, Restany decided to choose the French artist Yves Klein (1928-1962), as the leader of the movement[3].

In 1963, Jilali Gharbaoui was admitted to the hospital of Mouley Youssef in Rabat, where he stayed for few weeks, receiving electroshock treatment. Because of his unstable situation, the living conditions of the artist worsened. He couldn’t make money from his art, nor teach at the École des Beaux Arts in Casablanca. In 1969, he met the senior official of the Moroccan Ministry of Finance, Abderahman Serghini, who tended to become a great collector. The latter provided housing in his personal villa, as well as materials, to Gharbaoui, but also Miloud Labied (1939-2008), and Omar Bouragba (1945-), who were all working together. It is known that Serghini pushed Jilali Gharbaoui to produce works in large quantities, almost mechanically; and that he would buy at low cost. In the early 1970s, the major part of the artist’s atelier has been sold to the collector.

As of 1952, the artworks of Jilali Gharbaoui show that the avant-garde Parisian dynamic fundamentally encouraged him to experiment, as he stated: ‘Abroad, I can produce and progress much more than I can here [Morocco]. There is an entire context that enables this: a well-prepared audience, museums, critics, as well as groups and movements against which one can situate oneself’[4]. As a matter of fact, Gharbaoui detached himself from Impressionist painting, that he had been producing at the École des Arts in Fez; and moved towards a style, inherent to the renewed Ecole de Paris. When he first came back to Morocco from Paris in 1955 – one year before Morocco got its independence, the painter significantly exposed his inspiration from the French artist Roger Bissière (1886-1964) in his works. Gharbaoui saw the surface of the canvas as a terrain for experimentation, that he fully exploited, such as in the example Composition (1955), part of the Dalloul Art Foundation’s collection. Using black lines, the artist fragmented the pictorial space into small geometric pieces, that he filled with pure, and bright colors. The ensemble conveys a vibrant effect, like a kaleidoscope, whose colors recall the ones of the lands of Morocco. Here, the lines, crossing each other, could allude to a labyrinth, in which the viewer’s eyes rove an endless itinerary. Note that Gharbaoui completely filled the canvas, as if he refused to live any empty white space. Accordingly, the lines could also look like a grid, which symbolically materialize the enclosure of the artist in his studio, with his innermost thoughts. The painting of Gharbaoui should be perceived as an extension of the artist’s personality. This example of Composition (1955), demonstrates an uncomfortable state, whereas a small series of calm landscape scenes, illustrate a state of quietude, in which the artist was, when he peacefully sojourned in the Benedictine monastery of Tioumliline by the end of the 1950s.

In Morocco, Jilali Gharbaoui was part of the artistic, and intellectual circles, which especially included the Poet Driss el-Jai (1924-1977), and the artists Miloud Labied (1939-2008), and Farid Belkahia (1934-2014). In parallel, he saw that the occurring regain of interest in the local folk-art, would pave the way to build a modern Moroccan art, within a context of pre-independence. Nevertheless, he didn’t find any connections made between this local folk-art, and the modern time, in which Moroccan people were actually living. Jilali Gharbaoui especially found this disconnection in the lack of involvement from the government to improve the Moroccan art scene: ‘Moroccan painting underwent massive development ten years ago. (…) Education in Morocco is incomplete. Nothing prepares Moroccans for the plastic art we are creating. (…) This fails to introduce the Moroccan public to modern painting or to the work currently being created around the world’[5]. The artist consequently refused to join a trend, which would strictly be based, and focused on Moroccan traditional art practice.

In Jilali Gharbaoui’s painting, it is effectively difficult to find some hints to an explicit ‘Moroccaness’, even in his work on abstraction. In 1960, Jilali Gharbaoui exhibited at the gallery Venise Cadre in Casablanca, thanks to the French art critic Gaston Diehl (1912-1999). Expecting a figurative painting, with Orientalist scene, the public was shocked by the violence of the drawings, and the dark colors of the artist’s abstract works. Since he was 13 years old, Gharbaoui was attracted to abstraction, that he specifically employed to express his feelings[6]. Nonetheless, he didn’t adopt both geometric, and Oriental abstractions, saying: ‘Revenu au Maroc, j’ai senti qu’il fallait sortir de nos traditions géométriques pour faire une peinture vivante’[7]. He was more interested in the mastery of the gesture itself, like in the non-dated work, Composition, also in the Dalloul Art Foundation’s collection. On a light earthy-colored background, the artist again worked with black lines, that he powerfully traced all over the canvas. These lines reveal his action, but are also the expression of his own spirit. The gesture looks free, and spontaneous, but Gharbaoui wanted to contain it in the limited space. The ensemble is reflective of the nature of the artist, who was a tormented individual, confronted to his anguish, and childhood traumas. The choice of color is also important to Jilali Gharbaoui, who would predominantly use blue. When he studied in Rome, he went to visit some churches, where he could contemplate the Italian paintings from the Italian Renaissance, in which the blue color was intensely applied. Here, the painter applied tones of blue, with golden touches, giving luminosity to the composition. He was permanently seeking for light in order to capture the truth, contrary to the dark, which blurs the vision.

The personality, and the artistic journey of Jilali Gharbaoui could be compared to the myth of the accursed artist. Making art was somehow an auto-therapy for him to control his mind, and to organize his ideas, not to sink into madness. Despite the difficulties, he succeeded in imposing his peculiar style to contribute to the elaboration of modern Moroccan art. His artistic conception was more in favor of a change, rather than a revival. Giving his oeuvre a universal dimension, the artist lived between two cultures, born Moroccan, with his last name meaning ‘Western’.

Jilali Gharbaoui was found dead on a bench in 1971, next to the Champs de Mars park, in Paris.

[7] ‘Back in Morocco, I felt that we had to detach ourselves from our traditional geometric art in order to create a living painting’. Jilali Gharbaoui’s response to the Artists’ Questionnaire, Souffles, nos.7/8, 1967 in Filali, Yasmina. Fulgurances Gharbaoui. Casablanca, Morocco: Fondation ONA, 1993. [P.241]