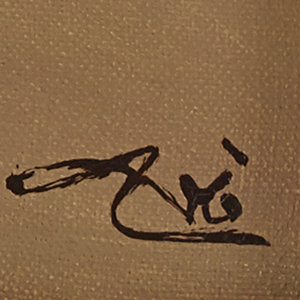 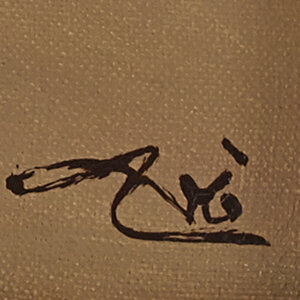 Faik Hassan was born in 1914 to a humble family in Baghdad, Iraq. Having lost his father before he was born, he was raised by his mother, and as a child, he sculpted statuettes of Arab Bedouins,...

Faik Hassan was born in 1914 to a humble family in Baghdad, Iraq. Having lost his father before he was born, he was raised by his mother, and as a child, he sculpted statuettes of Arab Bedouins, peasants, and horses. During his school years, Faik's teacher, artist Muhammad Khidir, encouraged and mentored the boy in the visual arts.[1] Khidir's paintings were an eye-opener to Hassan, whose future work would be subtly influenced by their nuanced use of color. In 1935, Hassan traveled to France to study at the École Nationale Supérieure des Beaux-Arts in Paris, graduating with a degree in painting in 1938. Hassan fled Paris during WWII and returned to Iraq. He was the first artist to teach in the department of painting at what was later known as the Institute of Fine Arts, then part of the Institute of Music in Baghdad. He headed the department from 1939 until 1962 and helped develop its pedagogical curriculum. Faik Hassan was amongst the first group of artists, including Akram Shukri, Atta Sabri, Hafidh Droubi, and Jewad Selim, to study in Europe on scholarships granted by the new Iraqi monarchy. When these artists returned to Baghdad, they founded art movements that would later set the foundation of modern art in Iraq.

Beginning in 1943, Hassan’s home in the al-Aiwadiyah district of Baghdad became a hub for the city’s creatives, who congregated there to share their artistic visions and concerns. A mentor to many, he advocated exploring Iraq for inspiration and painting en plein-air ­instead of restricting oneself to a studio. Hassan’s embrace of this technique, which was popularized by French impressionists, was not indicative of a wholesale investment in impressionism itself. However he dabbled in impressionist painting during the 1940s, he was concerned less with capturing the spontaneity of natural light than he was with accessing his country’s natural beauty. As such, he organized trips with his friends to the fields of al-Jadariyya and al-Aadamiyah and to the mountains of Kurdistan, where they painted landscapes and genre scenes. Critics referred to these artists as bida’iyyin, meaning “primitive” in Arabic – a term that Hassan adopted when he founded the Société Primitive in 1947. In 1950, the name of the group was changed to al-Ruwwad, meaning 'researchers on the move'.[2] Hassan then founded Al-Zawiya (The Angle), a short-lived group promoting national art as a reaction to the devastating six-day 1967 Arab war.

Hassan was critical of the works of his immediate predecessors, military artists in the Ottoman army who trained in the Western naturalistic tradition of painting at the War College in Istanbul. [3] Hassan questioned this unreflexive style. Though he admired the landscapes created by Abdul Kadir al-Rassam (1882-1952), a former officer and renowned artist, Hassan aimed for an art that was more expressive of Iraq's social structure and cultural background. As such, he sought to investigate Iraq, its ethnic groups, its geographical terrain, and its traditional customs. His ethnic survey included Kurds of the north, Bedouins in the desert, and the ‘Arab al-Ahwar, or “Marsh Arabs,” who dwell in the Tigris-Euphrates marshlands. Hassan reflected on the varied traditions he encountered: woolen rug-weaving in the desert, dancing in the wetlands, dying fabric, and crafting copper pots in the alleyways of Baghdad and its old souks.

During the era of decolonization from British control, Hassan shifted his focus to Iraqi nationalist artwork. In 1958, he was commissioned by Prime Minister Abdel Karim Qāsim[4] to design a mural that commemorated the July 14th revolution, in which Qāsim and his troops overthrew the short-lived monarchy and established an Iraqi republic. Hassan created a 5mx10m mosaic mural in a cubist style depicting Iraq’s celebrated sovereignty, featuring glorified militants, peasants, laborers, and children flying white doves as a symbol of freedom and peace. The mural, to date, stands tall in Baghdad’s al-Tayeran Square.

Hassan's artistic practice drew from numerous influences. Trained in Paris, he was inspired by modern European art movements: realism, impressionism, expressionism, and cubism. While it is fair to note the visual resonance between Hassan's early abstract work and European cubism, they are equally in harmony with Sumerian, Western Islamic, and local folkloric idioms. Following the cubist paradigm, Hassan’s wields his brush like a knife through space, slicing the picture plane into fragments. In his work At the Market (1958), for example, he reduces an image of farmers exchanging goods into geometric patterns of red, blue, and yellow, overlying the central figures. The formation of patterns in primary colors might evoke Picasso to the Western viewer, but it is also characteristic of Islamic abstraction and local Iraqi textile designs. The painting’s bright, illusory hues are also reminiscent of al-Wasiti's thirteenth-century illustrations, and the rigid figures, along with their linear distribution, resonate with the pictographic formation of Mesopotamian cuneiform. Meandering between East and West, Hassan was careful not to imitate. Instead, he created a modern style wholly his own, integrating Western techniques with Iraqi traditions in an aesthetic relatable to both Eastern and Western viewers.

The Bedouin lifestyle is a central theme in Hassan's oeuvre, where it suggests an authentic Iraqi culture that is close to nature and connected to the land. The Tent, oil on canvas painting from 1956, presents an undeniably inviting picture of this nomadic existence. The painting features a group of Bedouins with their clan in the desert. In the foreground, two men dressed in light ochre gallabiyahs and black abayas sit by the sandy floor. They rest against a massive bundle of jijim rugs - tribal mats made of sheep wool. Boldly striped in maroon, cream, and burnt umber tones, the rugs define the painting's restricted color palette, the warm tones of which draw the viewer into the intimate scene. To their right, a veiled woman squats on the floor. Her pale pink thobe and peach-orange jubbah lend highlights to the picture’s dark warmth. She rests just a step behind the two men, with her head bent down; in a Bedouin patriarchal community, women don't sit beside men. Hassan defines his figures with hard-edged shapes, bolding outlining their eyes and rendering their facial features in sharp, severe angles that lend them an air of dignity. Touches of green and blue shades mold their features. At the upper register, a maroon and burnt umber tent stretches on the horizon below a Gitane blue sky. Drawing from both cubism and post-impressionism, Hassan presented a quasi-abstract figuration in a structured composition. Depth is conceived in terms of size and planar distribution.

At some point in the 1960s, the artist developed an inclination towards primitivism. Line, shape, and color took over his compositions, with volume flattened to two dimensions. During this period, Hassan demonstrated an ability to compose naïve illustrations that retain a staggering appeal, such as in Man and Woman (1962). Unwilling to subscribe to a permanent mode of artmaking, the artist shifted his aesthetic focus yet again, following this period of abstraction with a turn towards expressive realism at the outset of the 1970s. The rough brushstrokes and shifting light characteristic of these paintings, which frequently picture Arabian horsemen, are reminiscent of impressionism, but again draw from a more immediate, local source. Hassan’s swift passages of colorful paint against dusty backgrounds add rush to his images, echoing the raids of fierce Bedouins in the deserts of Arabia.

Throughout its many phases of stylistic experimentation, Hassan’s work is distinguished by its mastery of color. The subject matter of his work always gains significance through his poignant deployment of tone, accomplished through his careful choice of palette. A 1976 oil painting, Masquf, exemplifies this. In the image, a man by the banks of the Tigris river prepares masquf, a traditional Iraqi dish of marinated grilled fish. Though it depicts only a simple slice of daily life, its nuanced use of complementary colors –blues and oranges– gives the work a meditative quality that transcends its mundane subject. While he cooks the large fish over an open fire of crackling yellow, cadmium orange, and pale vermillion, a fisherman rests in a blue boat on the tranquil river. Though the work cannot be called strictly impressionistic, Hassan's brushwork is highly unusual by the standards of conventional realism; they are short, rough, and highly expressive.

Love and women's sensual beauty played a key role in Hassan’s work until the end of his career. In his last works, he painted female nudes and bathers in various states of pleasure, from a coy desire to unbridled joy. Even his more subdued, clothed portraits of women frequently suggested seduction, as can be seen in Khowlia (1974),[5] portraying a woman in red. It leads us to recall one of Hassan's unique early portraits, which bears witness to his love - Jacqueline. The painting features a girl with a light complexion, full red lips, a delicate neck, and black hair.[6] Hassan, who had fled Paris during WWII, left his love and colleague Jacqueline behind. He lost contact with her.

In 1948, Hassan’s student Ismail al-Sheikhali met Jacqueline in Paris and sent a letter informing Hassan about the good news. The now-married woman offered to file for divorce and return to Hassan –an offer which the artist plainly refused. Nevertheless, Hassan traveled to Paris in 1951 to see Jacqueline and her husband, who was a former colleague of his. With a broken heart, he bid the couple goodbye, thinking he had lost the love of his life. That same year, however, Hassan’s luck changed (or so he thought); he met Suzanne Côtier, whom he married in 1953. Côtier was a turning point in Faik Hassan’s life. When she moved to Baghdad, she insisted on relocating from al-Aiwadiyah, where Hassan lived for ages, to the fancy neighborhood of al-Sulaikh. She distanced him from his friends and refused to host them in their home. Suzanne also wanted to dispose of whatever linked Faik with his past, specifically of Jacqueline’s portrait. Fortunately, Hassan gave it to his student and friend Walid Sheet,[7] who preserved it for him.

Faik Hassan died in 1992 in Paris, France. His body was cremated[8] and his ashes were brought by his wife to be buried in Baghdad. Memorialized through his inspirational oeuvre, Hassan will forever be known as one of the fathers of modern Iraqi art.

“Jawad Salim and Faiq Hassan and the Birth of Modern Art in Iraq.” Omeka RSS, artiraq.org/maia/items/show/170.

Mehri, Gholamreza. “The Colour in Islamic Art.” Research Journal of Humanities and Social Sciences. A and V Publication, March 28, 2016. http://rjhssonline.com/HTMLPaper.aspx?Journal=Research+Journal+of+Humanities+and+Social+Sciences;PID=2016-7-1-6.

The Iraqi Century of Art - Artnet Magazine, 23 May 2008,www.artnet.com/magazineus/reviews/davis/davis7-14-08.asp

Permanent Collection of Paintings and Drawings made in Iraq, Directorate General of Antiquities, Baghdad, Iraq

The Golden Prize at the Gulbenkian Foundation in Iraq 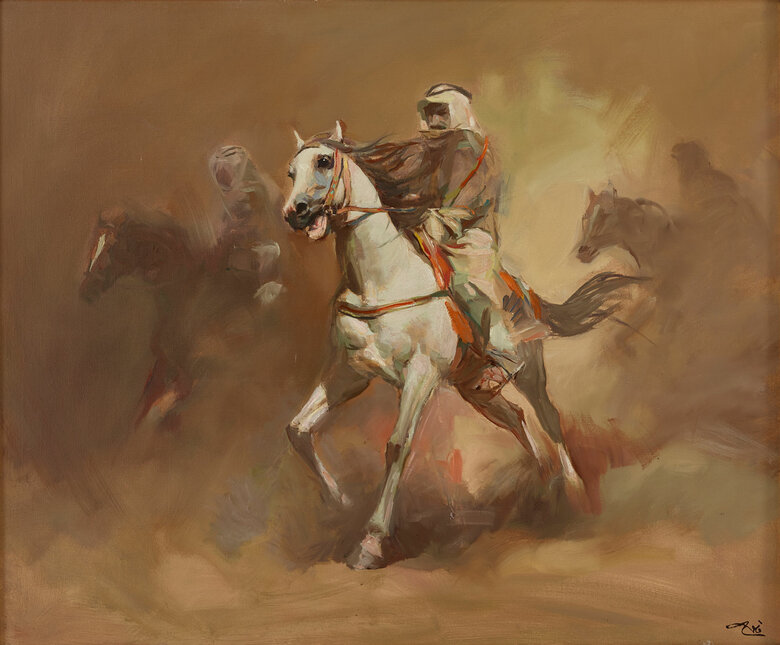 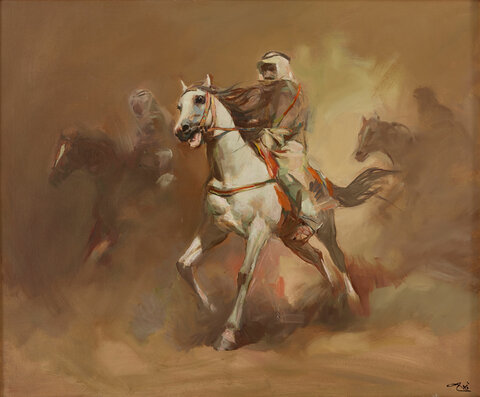 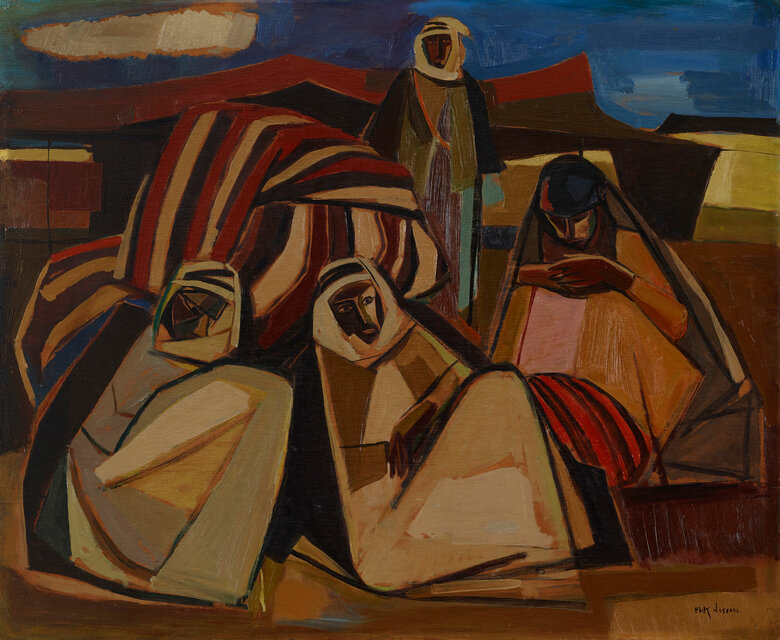 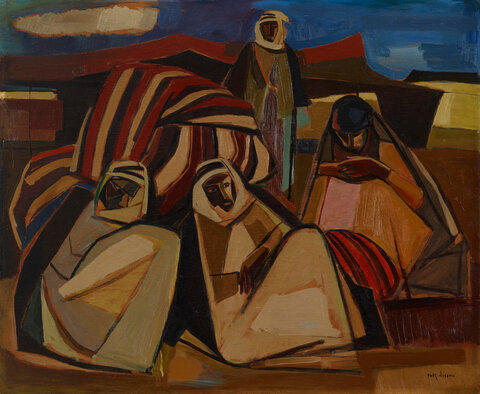 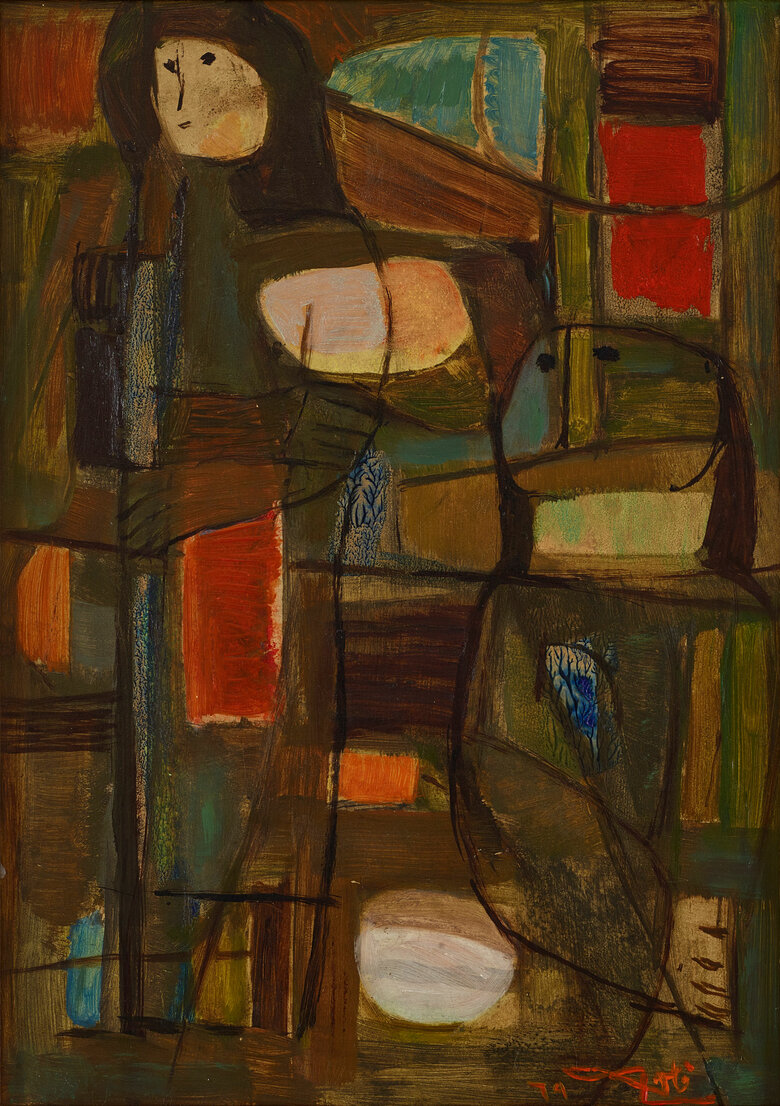 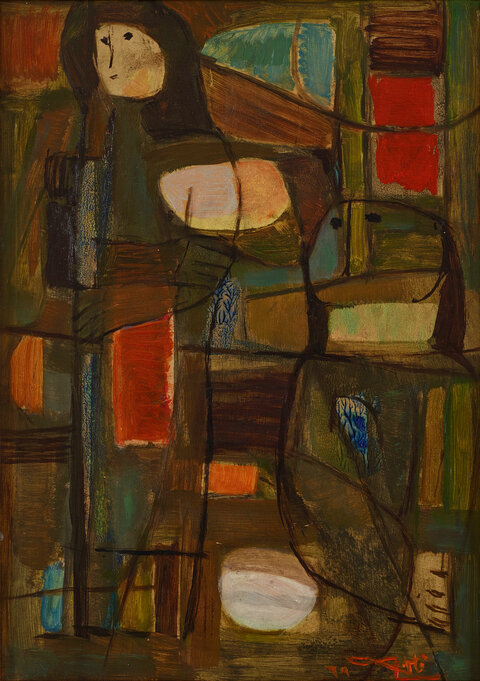 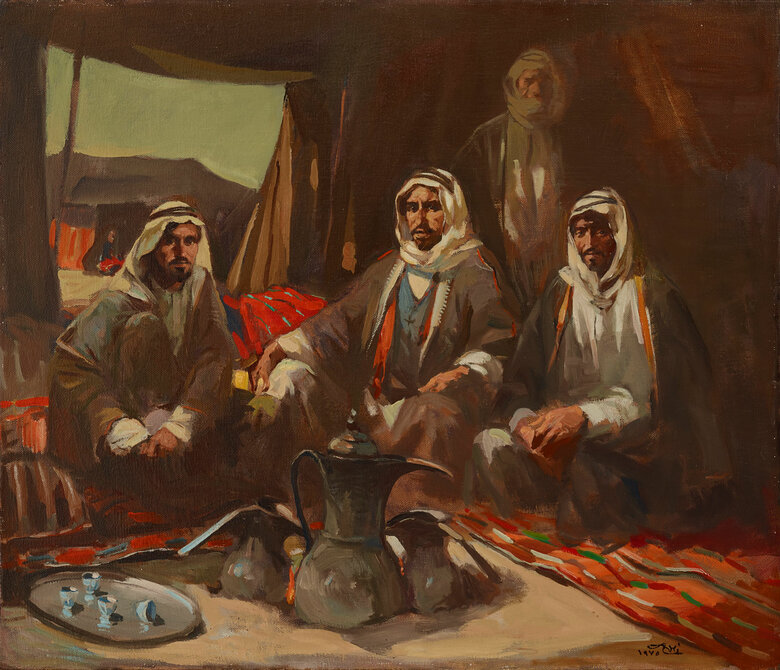 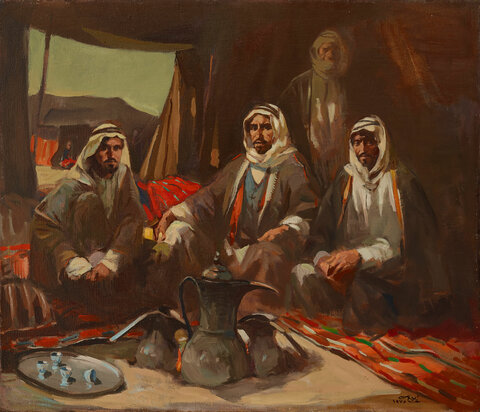 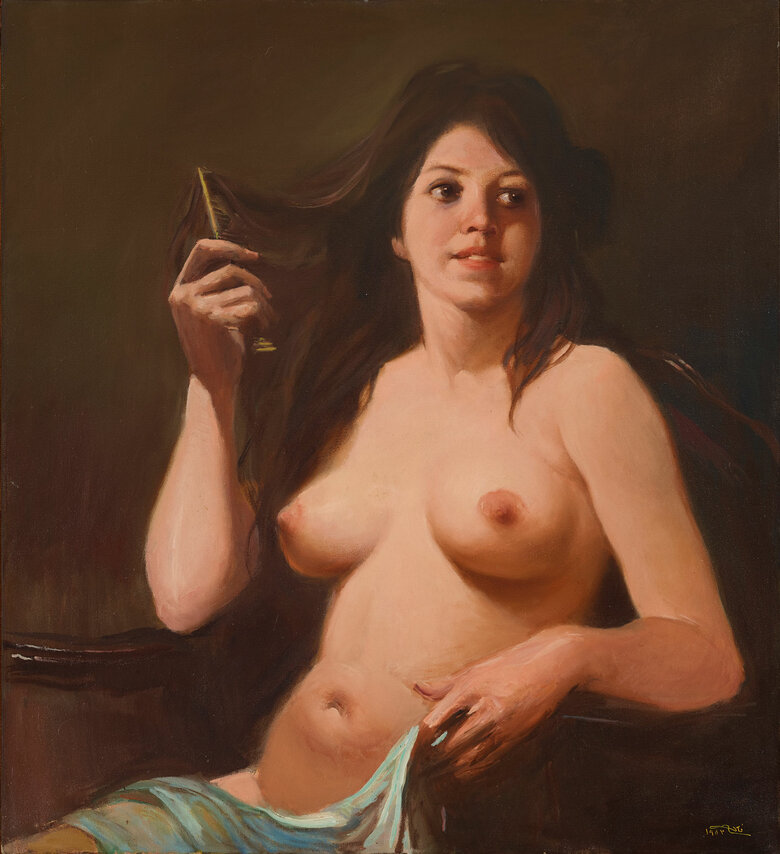 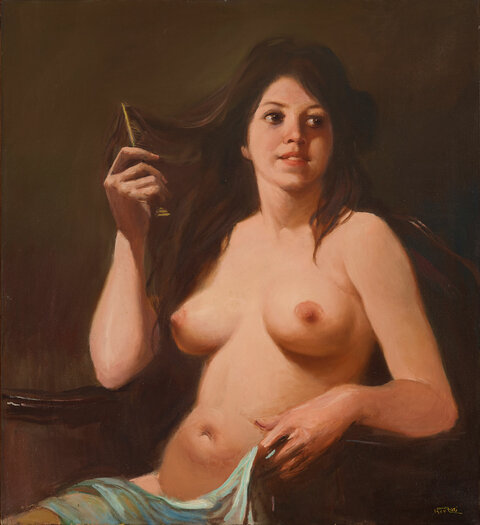 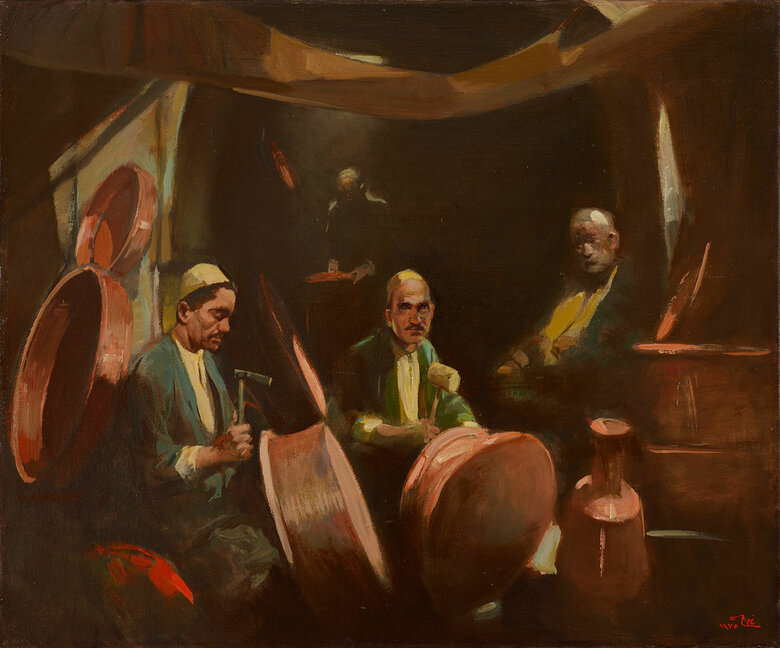 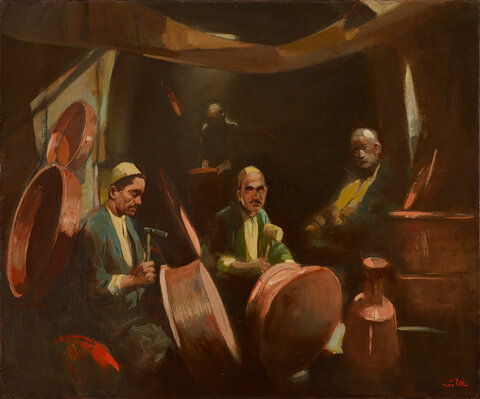 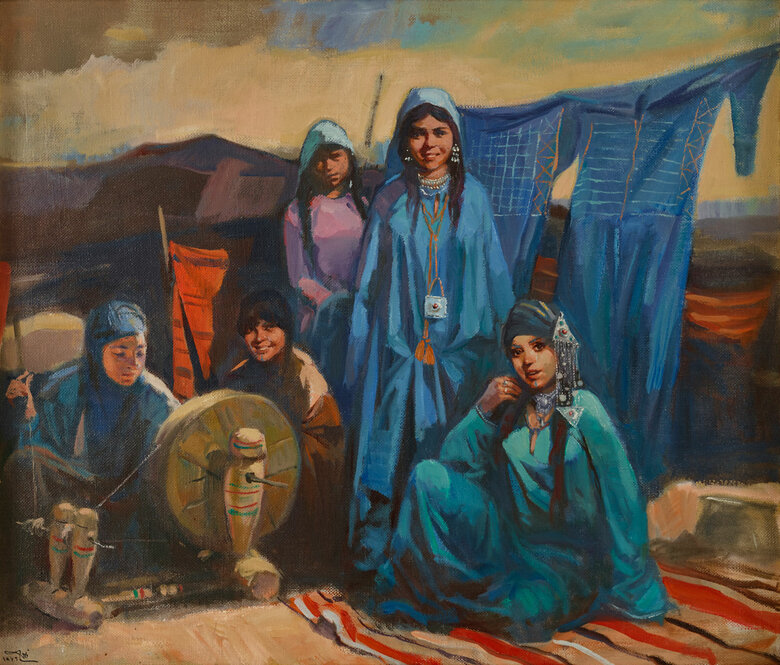 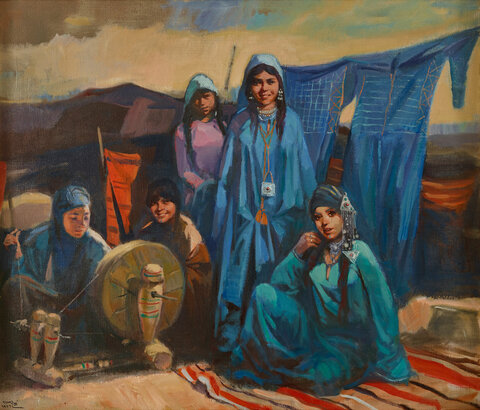 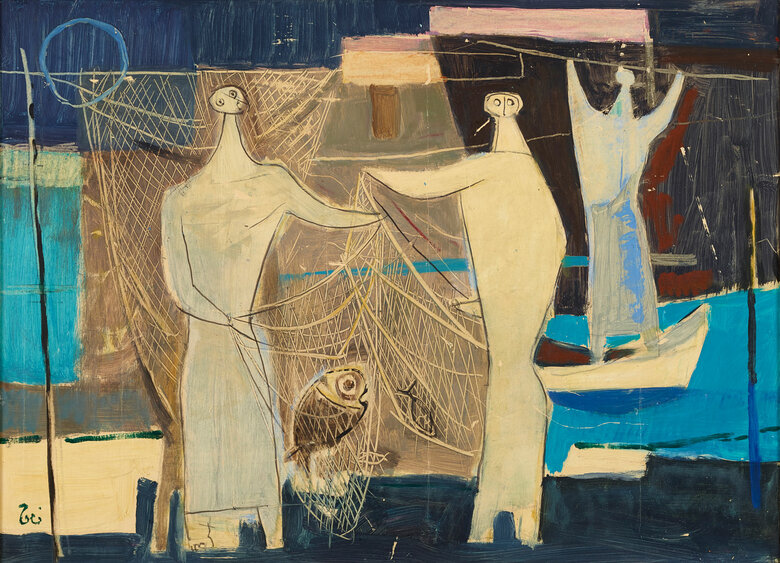 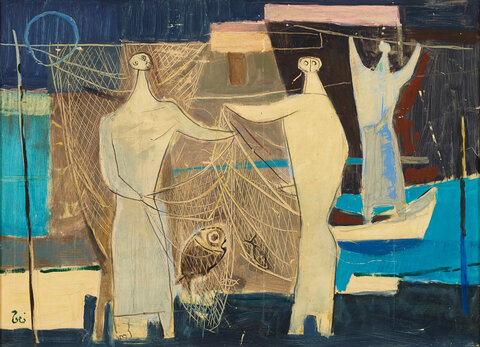