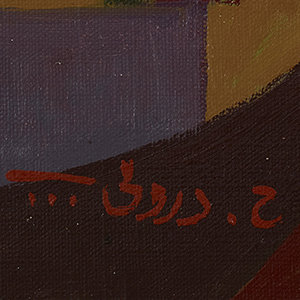 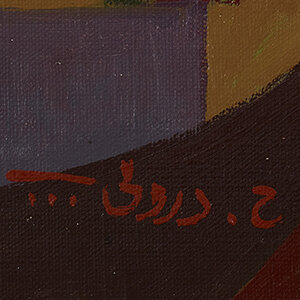 Born in al-Sadriya, a working-class neighborhood of Baghdad, in 1914, Hafidh Droubi lost his father at a young age. Raised by his mother and his uncle in a religious family environment, he started his education with Qur’anic studies at the Mohammad Al-Alfei mosque, later learning painting at Al-Owainah School.

He began to show an inclination towards art by the age of five when he carefully observed his mother making embroideries with some dexterity and would paint anything that fascinated him through the embroidery motifs and colors.

The year 1931 marked the first major step of his artistic career, as through his participation in the Industrial and Agricultural Fair of Baghdad, he grew acquainted with fellow Iraqi artists Faik Hassan (1914-1992) and Jewad Selim (1919-1961). All three artists would grow to be hugely influential figures in the development of Iraqi modern art. Five years later, Droubi held his first solo exhibition, which included twenty works and aroused the interest of Prime Minister Yassin al-Hashemi (1884-1937). He thus became a member of the second generation of Iraqi students to receive a scholarship from the government to study abroad, staying in Rome from 1937 to 1938 to train under the Italian artist Carlo Siviero (1882-1953). There, he was able to explore Western art traditions in-depth but was obligated to leave the city after the outbreak of World War II. In 1945, he returned to Europe to complete his studies at Goldsmiths College, London, from which he graduated in 1951.

Upon his return to Iraq during the Second World War, Hafidh Droubi became an active contributor to the elaboration of a local art scene by getting involved in education and working to broaden the practice of plastic arts in Iraq. For example, alongside Faik Hassan (1914-1992) and ‘Atta Sabri (1913-1987), he helped to establish the curriculum for the drawing department at the nascent Institute of Fine Arts in Baghdad in 1939. In 1941, the same three painters were called upon to restore ancient Mesopotamian artifacts for the Iraq Museum,  subsequently learning more about their country’s cultural history than they had been taught during their Eurocentric educations. In 1942, Droubi opened the country’s first free painting studio, providing the curious with an introduction to artmaking and furnishing budding artists with a place to hone their craft. Other artists’ studios would follow Droubi’s example, including the studio at the Faculty of Arts and Sciences at Baghdad University. At this time, King Faisal II (r. 1935-1958) was actively involved in crafting a new, modern image for his country, and the growth of the cultural sector was significant to his agenda. Iraqi artists were thus met with significant governmental support in their efforts, including Droubi. Along with ‘Atta Sabri, Jewad Selim, Abd al-Qadir al-Rassam (1882-1952) and Akram Shoukri (1910-1986), he co-founded the country’s primary association of artists, the Friends of Art Society (Jama’at Asdiqa al-Fann), also known as Société Primitive (Jama’at al-Bida’iyyin), in 1941. The group was not elite or exclusive but rather sought to gather established artists and amateurs alike, alongside architects, calligraphers, and other creatives to nourish the creative spirit of the rapidly modernizing country.

Returning from London in 1951, Hafidh Droubi participated in the first exhibition of the Baghdad Group for Modern Art, established earlier that year by Jewad Selim and Shaker Hassan al-Said. He left the Baghdad Group in 1953, encouraged by his students to found his own group, as Selim and Faik Hassan (1914-1992) had already done. Thus was born the Impressionist Group (Jama’at al-Intiba’yyin), which operated in correlation with his career as an art educator. The group did draw inspiration from the European movement of the same name, but in an unconventional sense. While most looked to painters like Monet and Sisley for their treatment of ephemeral light and their use of hurried, expressive brushstrokes, Droubi seized upon their technique of painting landscapes en plein-air. For Droubi, to be an impressionist was to be a painter of nature, thus inspired by the beauty of the Iraqi landscape rather than by canvases in Paris. Over the course of a decade, many artists –including Khalid al-Jadir (1914-1990), ‘Ala Hussein Bashir (b.1939) and Saad al-Ta’i (b.1935)–aligned themselves with this group, which distinguished itself aesthetically and thematically from the Baghdad Group by its emphasis on landscape. Yet, as al-Ta’i suggested in 1963, the celebratory view of nature and folklore that these artists shared at the outset was not enough to bridge the differences between members’ practices; the diversity of the group ultimately made it impossible to define its originality.[1] More than a specific theory or concept of art, it seemed, Droubi was the true link between the “Impressionists.”

The career of Hafidh Droubi spanned an incredibly tumultuous time in Iraqi history. Born during the British Mandate, the artist lived to see the establishment and overthrow of the Hashemite monarchy, two more military coups, and the increasingly dictatorial presidency of Saddam Hussein; remarkably, though his art practice weathered all of these regime shifts, it did not generally engage directly with the changing political climate.  Instead, his oeuvre shows the interest of the artist in experimenting with different tendencies rather than affirming any particular political stance. As modern Iraqi artistic and political movements evolved in tandem, Droubi drew inspiration from his environment and its cultural richness. Nicknamed the ‘City Painter,’ he illustrated various aspects of mundane, daily life in Baghdad, painting its streets, its marketplaces, its coffee shops, and other places animated by the hustle and bustle of ordinary people. ‘Baghdad is my soul, my mother and my everything,’[2] the painter famously said. This source of inspiration celebrates a continuity with the local past, incorporating references to Islamic and Mesopotamian cultural heritage without asserting that such references were necessary to make a work of art “authentically Iraqi.” In 1955, he declared during the first exhibition of the Impressionist Group that he considered an artwork to be Iraqi as long as the subject is Iraqi – giving little importance to the style.[3] Hence, the vast majority of his works tackles similar topics all inherent to Iraqi visual culture. In the oil on wood Hammam (c.1960), he recalls the traditional public bath in the Arab-Islamic world, historically a hub of social life. In depicting these nude figures with their long hair exposed, he brings the spectator into an intimate, sensual moment, which plays out against an unmistakably Islamic arcade of pointed arches. Since appearing in the construction of the Al-Aqsa mosque, which dates from less than a century after the death of the Prophet, the pointed arch has been widely used in the erection of both religious and secular edifices throughout the Arab world and is today considered a marker of Islamic architectural identity. Although this local architecture had always surrounded them, the first Iraqi artists did not always pay attention to it, convinced by the colonial culture that their own civilizational legacy was retrograde in comparison to modern Europe. In an untitled painting from 1967 and Ghoroub ‘alaa Dijla (Sunset over the Tigris), executed in 1970, he celebrated the belonging to Mesopotamia, a land with thousands of years of culture to which Iraqis are the legal and historic heirs. The two cockerels refer to the symbolic image of the rooster, which appears frequently on Mesopotamian artefacts, especially seals. The bird is often associated with Nusku, the Sumerian god of light and fire, because its crowing announces the apparition of the first rays of the sun. Here, Hafidh Droubi depicted what may be a cockfight, a form of gambling entertainment still practiced in Iraq. In his plastic language, the idea of continuity between the present and the past is important, linking something as common as a round of gambling to something as profound as the ancient god of light and fire. This continuity is also represented by the Tigris itself, which has crossed the country for millennia and successively hosted the Sumerian, Babylonian, and Assyrian civilizations.

In evoking the “Iraqiness” of his scenes, Droubi does not play by conventional aesthetic rules, but rather restructures forms and colors. The style of his mature career plays with the liminal spaces between figuration and abstraction. He abandons linear perspective for two-dimensional representation, flattening the foreground and superimposing visual elements in elevation from the supposedly closest to the furthest. He paints the same scene from multiple perspectives, giving us a vertiginous view of an object’s many angles at once. Attentive to the lines and silhouettes of the natural or human motifs, he reduces them to simple, geometrical shapes like the square or the triangle, assembling these shapes to fill the canvas as though constructing a collage. His canvases become a laboratory for experimenting with colors and light, integrating flat and complementary colors to establish a sort of perspective with a gradation: the more saturated colors come to the front, whereas the darkest and most muted recede. The chromatic intensity of Droubi’s work makes a profound impact on the spectator, for whom the paintings provide a sensory experience that goes beyond the evocation of depth.

Although commonly affiliated with impressionism, Hafidh Droubi resisted easy categorization throughout his career. “As I am an artist,” he noted in the 1970s, “I paint what I feel, and my belonging to a certain school will not have any inhibiting effect on me”[4]. A painter of nature and quotidian life, his pleasure in reinventing the everyday shines through his landscapes, genre scenes, and still lifes, imbuing paintings of every style and from every stage of his career. The artist, who passed away in 1991 in Baghdad, is remembered as a dedicated teacher and is celebrated today as a major driving force in the development of Iraqi arts education.

[2] Hafidh Droubi in an interview with Al-Rewaq magazine in 1977 quoted by his granddaughter Mina Aldroubi in Aldroubi, Mina. “My Grandfather, the Man Who Coloured the Streets of Baghdad.” The National. Accessed January 28, 2020. https://www.thenational.ae/arts-culture/art/my-grandfather-the-man-who-coloured-the-streets-of-baghdad-1.671211.

Aldroubi, Mina. “My Grandfather, the Man Who Coloured the Streets of Baghdad.” The National. Accessed January 28, 2020. https://www.thenational.ae/arts-culture/art/my-grandfather-the-man-who-coloured-the-streets-of-baghdad-1.671211.

Commemoration of 19th anniversary of the artist, London, United-Kingdom

Last Exhibition of the Group of the Impressionists, Bagdad, Iraq

Exhibition of the Group of the Impressionists, Iraqi Artists Association Hall, Bagdad, Iraq

First exhibition of the Group of the Impressionists, Bagdad, Iraq

First exhibition of the Group of Bagdad for Modern Art, Museum of Ancient Costume, Baghdad, Iraq

Exhibition of the Society of the Friends of Art, Baghdad, Iraq

Exhibition of the Society of the Friends of Art, Baghdad, Iraq

In Conversation With : Venetia Porter Part 2 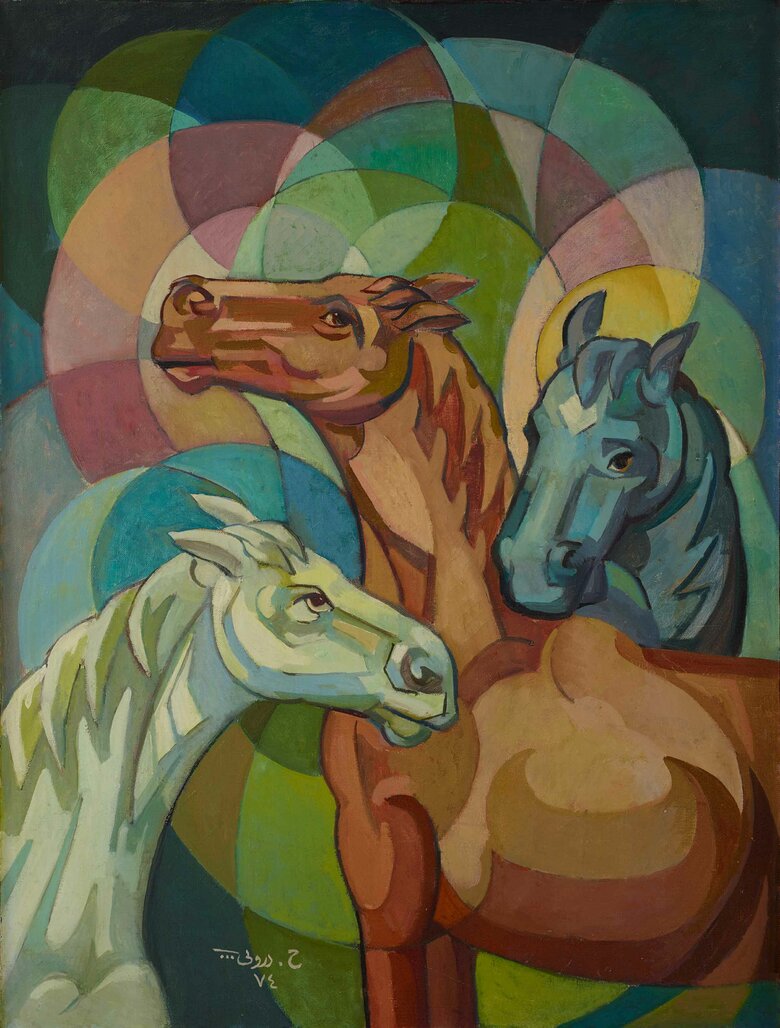 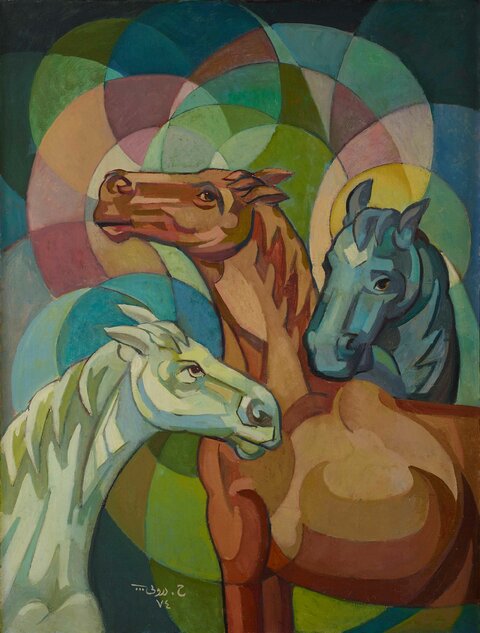 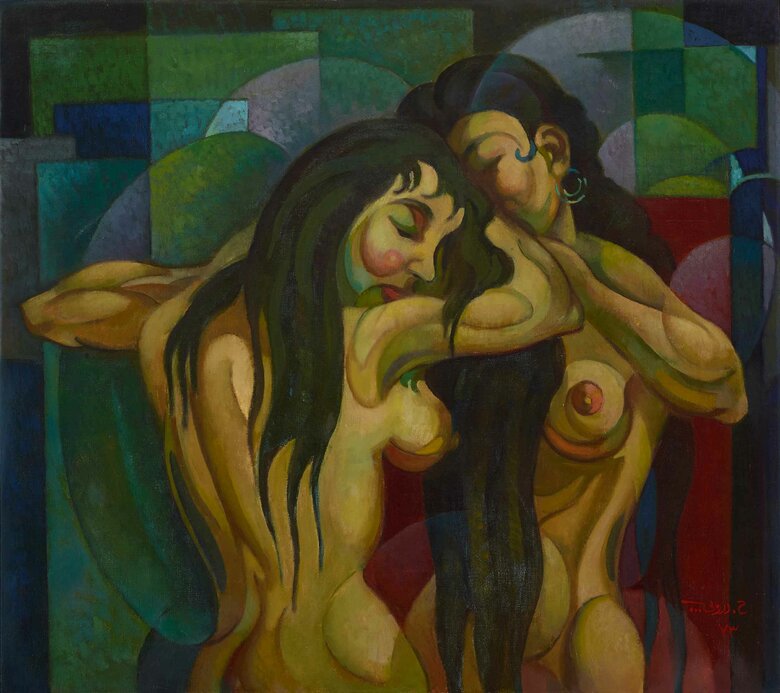 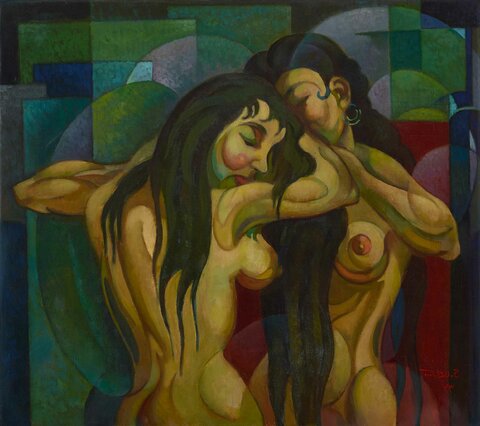 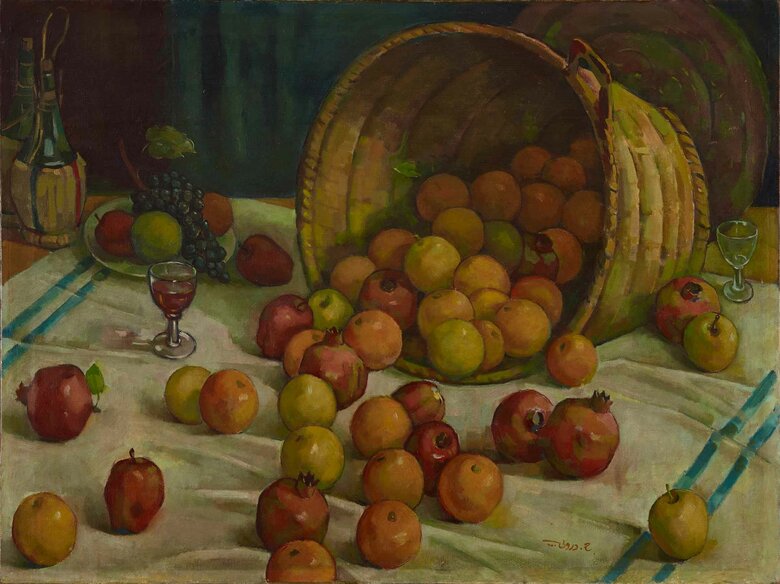 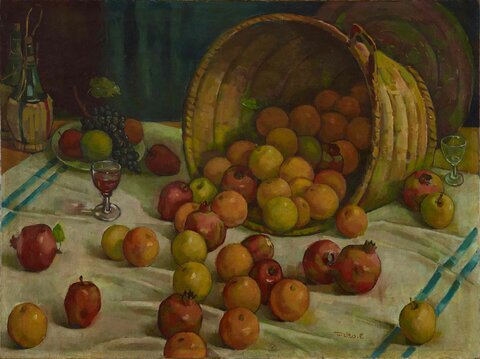 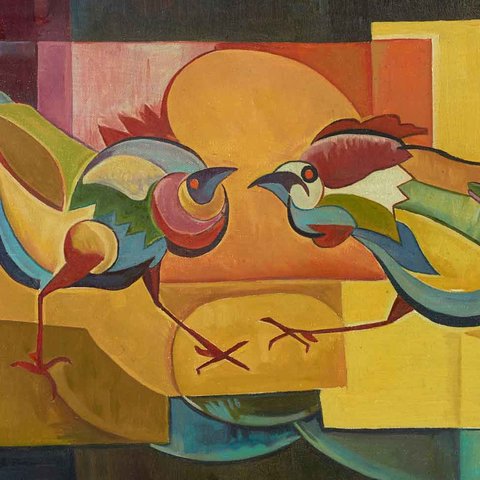 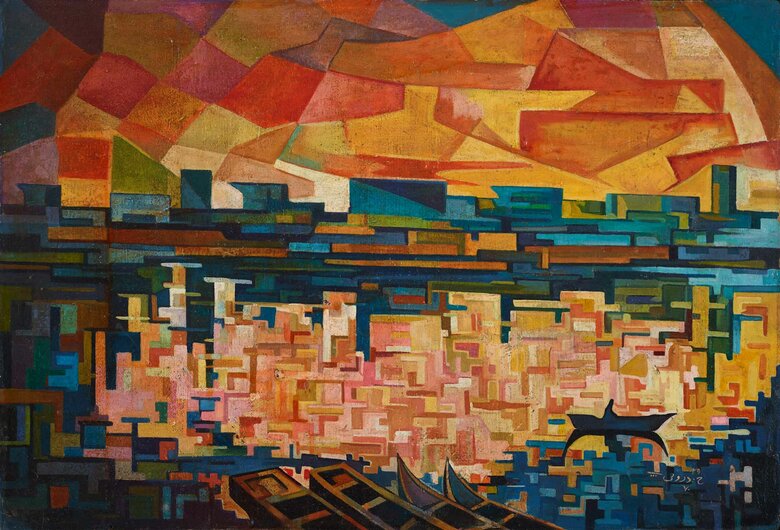 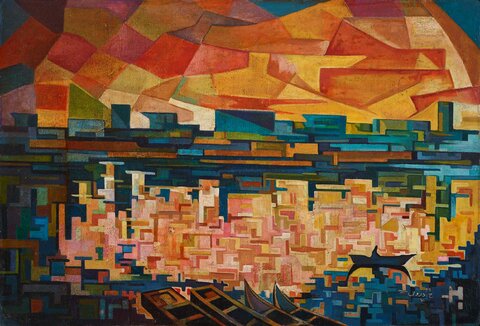 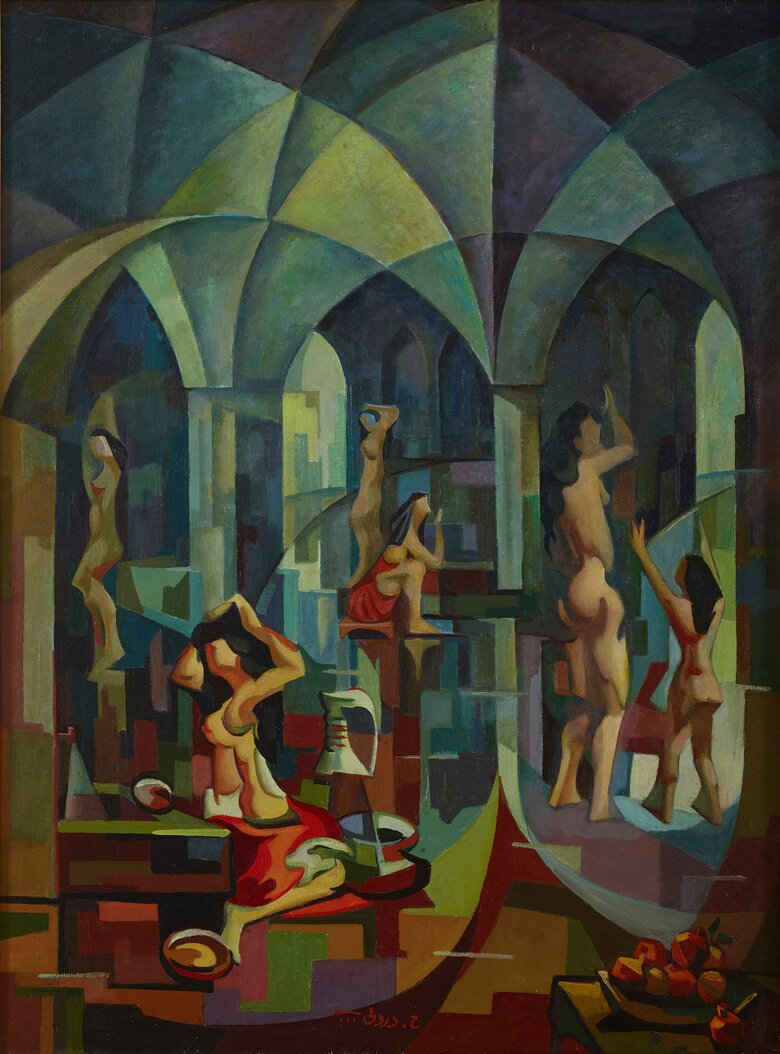 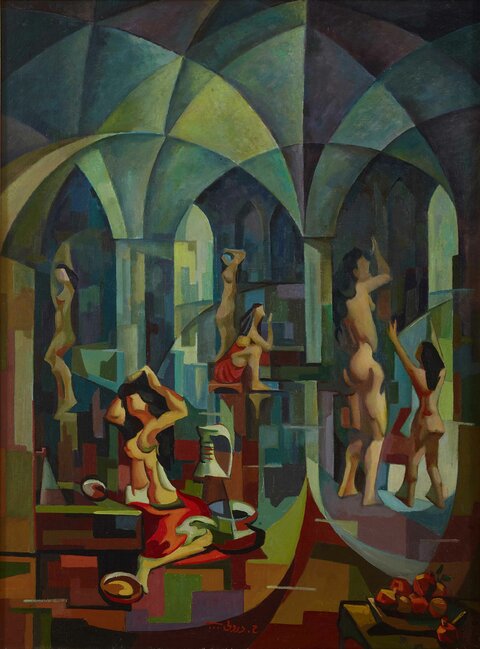