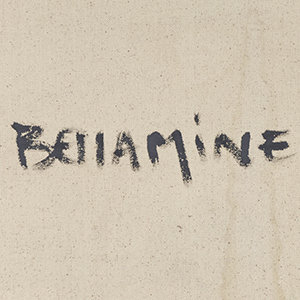 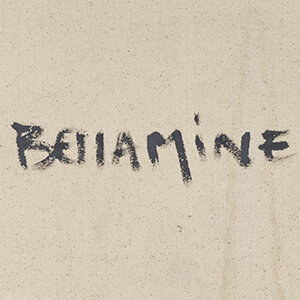 Born in 1950 in the imperial city of Fez, Fouad Bellamine grew up in the neighborhoods of the madina – the old city, where he used to look at his grandfather working as a weaver. His father liked to paint in his spare time, and sold some of his woks in the hairdressing salon, that he ran. In 1967, Bellamine enrolled in the École des Arts Appliqués in Casablanca, and acquired a proper education in art History. He could also extend his technical knowledge, by practicing painting, drawing from life, sketching, and working on a wide range of materials. He would eventually specialized in graphic art for advertising. In 1971, he traveled to Europe, where he successively visited by train France, Yugoslavia, and Italy. At that time, the artist could discover Western art, and its paintings, from which he only had known some reproductions in black and white[1]. Back to Rabat, he started a career as a teacher of plastic arts in a secondary school in 1972. The same year, he held an exhibition with three other artists, at the Galerie de La Découverte, and showed the public a particular interest in abstraction, through a series of landscapes paintings. In 1984, he went back to France on a governmental scholarship, and resided at La Cité des Arts in Paris. There, he simultaneously prepared a Degree of in-Depth Studies in art History, and theory of art at Saint-Denis University - Paris VIII; and his doctoral thesis on the concept of ‘murality’ in contemporary art. Yet, Bellamine decided to return to Morocco, without defending his thesis, saying: ‘I refused, because I had the impression that I was betraying my ideals. It was almost as though I was going to give up painting’[2]. In 1989, he established with his French fiancée Elisabeth Belhomme, in the coastal city of Harhoura, near Rabat. He actively dedicated himself to art education, becoming teacher of art History at the Centre Pédagogique Régional (Regional Centre of Education), and contributed to the formation of a generation of Moroccan teachers. To Fouad Bellamine, the role of an artist in Morocco has to be versatile; which means to be practitioner, teacher, as well as curator[3]. He consequently involved in the organization of some exhibitions, being in charge of the curating. In 1980, he set up the tribute exhibition for the artist Jilali Gharbaoui (1930-1971) at the Bab Rouah Gallery, and at L’Oeil Gallery, both located in the Moroccan capital city. However, the artistic environment of his homeland somehow disappointed him, in the sense that he didn’t notice any difference from what he had left in the early 1980s until his return. This environment was not up to his expectations, since very few galleries were opened, and no museum was founded.

When he was 10 years old, Fouad Bellamine created his first book of art. He took the Larousse dictionary of his father to tear the pages of black and white illustrations from History of France, landscapes, and religious scenes. He stapled the pages with each other, and covered it with cardboard. He then learnt the illustrations of the paintings from the great European masters[4].

From 1950s to 1980s, the painting in Morocco was partly developed by self-taught artists, who adopted naïve art to produce spontaneous compositions, illustrating a sort of stereotyped image of their country. They used to paint the city scape with public markets, baths – hammam –, the old city, and its daily folk life. Among these artists, Fouad Bellamine had an admiration for the works of Hassan El Glaoui (1924-2018), Chaïbia Talal (1929-2004), and Moulay-Ahmed Drissi (1924-1973). Though, since the beginning of his career in the 1970s, the artist has always been looking for experimentation, rather than a realistic representation, to redefine what he considered to be the Moroccan artistic identity. For example, he likes to work with diverse materials, including fabric, plaster, wood, and chalk, and he also executed some installations – being one of the first painters to do so in Morocco[5]. Besides, Bellamine was aware of the multiple abstract movements, which happened in the United-States, and in Europe, and would move towards a similar style. The painter focused on the relationship between the physical space, and the conceptual space of the canvas. He progressively imposed a certain minimalism in his artworks since then, through a production of different series.

Back in the early 1980s, in parallel with his studies in Paris, Fouad Bellamine worked as a graphic designer for the magazine Guy Sorman, and started exhibiting his works in several galleries. With a growing success, he quickly integrated the Parisian cultural, and artistic scene, to the extent that he signed his first contract at the famous American Nikki Diana Marquardt gallery, in 1985. Nevertheless, the oeuvre of the artist has always remained attached to his Moroccan, and Muslim cultural richness. As of 1984, he began a series of paintings notable for the motif of the arch, seen in the piece entitled Arche (1984), part of the Dalloul Art Foundation’s collection. Using a dark palette of colors, he painted with delicate brushstrokes a yellow semicircular arch, shaping a bridge between the two vertical sides of the canvas. The arch is reminiscent of his childhood, and manifests his attachment to the architectural space from the old city of Fez, with the walls, the doors, and the vaults[6]. Here, he effectively rendered the roughness of a wall, that he pierced with an arch. The latter creates a recess, which symbolically corresponds to a transition to the sublime. In Islamic architectural tradition, the niche formed by the arch is omnipresent, and specifically in the construction of mosques like the mihrab – a semicircular niche giving the direction towards the Kaaba in Mecca. This series of Arches painting highly reveals that Fouad Bellamine rises his art up to a spiritual dimension, and stays close to his Muslim religious culture.

This metaphysical approach of Bellamine to art is also characterized by the work on colors. The painter applies black, and white, but also earthy and warm colors such as ochre, blood red, and yellow, like in the painting Memory (2013), part of the Dalloul Art Foundation’s collection. Again, these colors are inherent to the time of the artist in Morocco, and he relates the natural pigments to the primitive state, and the land. However, the grey is the predominant color in his oeuvre, leading him to play with the light, and the tones, such as in the series of untitled paintings, also present in the DAF’s collection. The grey, that he chooses, is actually colored with hues of bleu, and is very vibrant. In his conceptual research, the artist doesn’t necessarily insist on the visual aspect of the color. He effectively experiments the color to shape the composition in order to embody ‘the spaces by means of colour, giving it a living form, an essential presence’[7], as he stated. Additionally to the color, the light also refers to his old memories, when he saw the rays of light crossing the canopies of straw, and palm leaves, which protect the alleyways from the blazing sun. Starting the 2000s, Fouad Bellamine plays with brightness, and darkness in his paintings – sometimes almost monochromatic –, searching for the transparency to reach the transcendent beauty. Thus, the grey becomes the right color in this quest, because it appears to be the mix, which allows ‘the black and white to gain strength’[8]. The notion of purity, and spirituality recalls the main principle of Sufism, which is the esoteric, and mystical thought of Islam, emerged in the 7th century. This thought encourages to go beyond the physical reality, and to find the hidden ways to get close to the Creator. Although he is detached from any religious practice, Bellamine shows his creative process as Sufi, since he is in a ‘perpetual search of light and elevation’[9].

The oeuvre of Fouad Bellamine has been placed in the debate, which concerns the authenticity of Moroccan art during the 20th century. The artist has always felt enriched by two cultures: the Moroccan, and the Muslim one, which he grew up with; and the Western one, which have nourished his curiosity for a long time. But without favoring one to the other, he preferred to combine each, specificity, to create a painting out of the time, and universal.

Fouad Bellamine lives and works between Rabat and Paris.